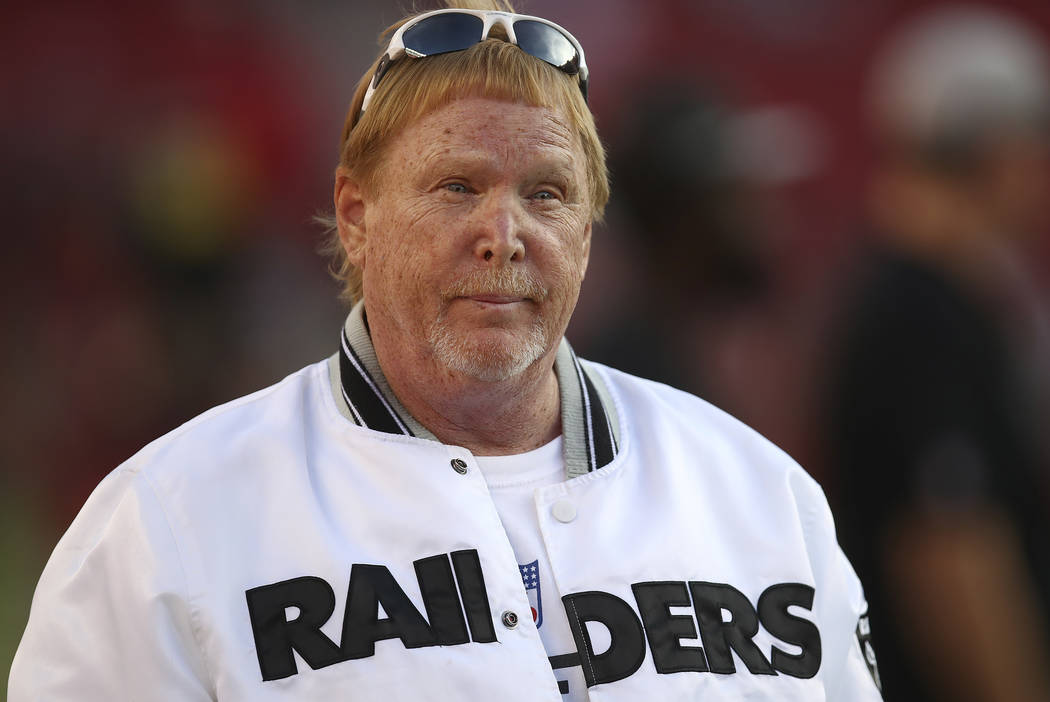 ALAMEDA, Calif. — As speculation persists on the Raiders’ whereabouts for 2019, team owner Mark Davis remains confident in a search process that’s expected to culminate in a decision this month.

Davis said that the Raiders are internally handling the task to identify the location of home games next season.

“I’m not frustrated,” Davis said in a phone interview Wednesday evening with the Review-Journal. “I’ve said from the beginning, my biggest concern is our fans, and it’s my hope and preference to remain in the Bay Area (in 2019) for them. The fans have always been first in my heart. We do have other options, but the hope is to remain in the Bay Area next season until we move to Las Vegas in 2020, which I remain very excited about.”

The Raiders have explored a number of possible venues, and the NFL has offered its assistance as needed.

Those in the Bay Area include Levi’s Stadium in Santa Clara, California, Oracle Park in San Francisco, and a return to the Oakland-Alameda County Coliseum.

Meanwhile, a substantial amount of outside talk has arisen, linking them with cities as distant as London. On Sunday, an NBC Bay Area anchor reported unequivocally the Raiders will play home games at Oracle Park next season. No such agreement has been made.

“The thing is, we haven’t been the ones talking at all,” Davis said. “Others have been talking for us and in some cases against us. I know the (league) would like this decided within a few weeks, and we certainly don’t want to be the ones that would cause a delay in scheduling.”

The Coliseum, the franchise’s home for 40 of its 59 years, became a far less palatable option in December when the city of Oakland filed a federal antitrust lawsuit against the NFL and its 32 clubs. Had Oakland committed not to pursue such litigation, the Raiders were in line to extend their lease, paying $7.5 million rent in 2019.

Given the lawsuit, a 41st season at the Coliseum would carry conflicting emotions for Davis. But the organization has not publicly ruled out the option.

Scott McKibben, executive director of the Oakland-Alameda County Coliseum Authority, told the Review-Journal on Tuesday that he exchanged emails this week with Raiders president Marc Badain. During their correspondence, McKibben expressed that the $7.5 million rent offer remains on the table.

It is unclear the Raiders’ interest; the lawsuit was filed after the figure was negotiated.

One of the franchise’s eight games in 2019 will be in London, against the Chicago Bears. The location for the other seven is expected to be known in the coming weeks. Davis acknowledged the importance of expediency as the Raiders thoroughly consider the options that have surfaced during their months-long search.

The NFL generally announces its preseason and regular-season schedules by mid-April.