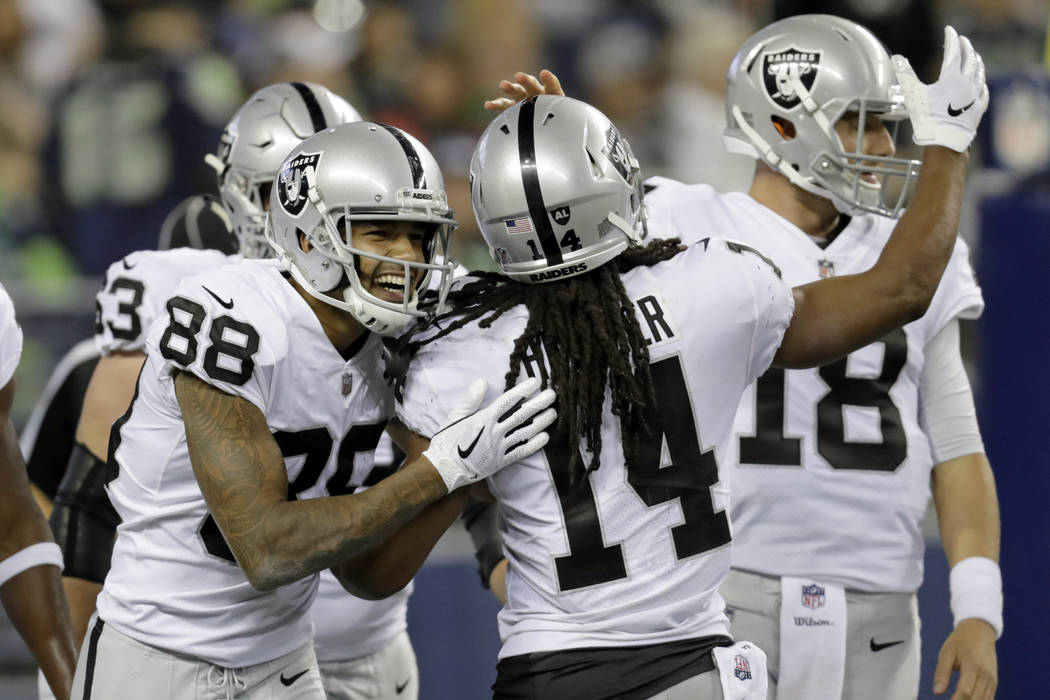 The rookie wide receiver spent the first seven weeks on the practice squad. Those on the 10-man unit do not travel with the club. For home games, they also aren’t permitted on the sideline. They can watch from a stadium suite, Ateman said, but he bypassed that option because no seating was available for his girlfriend or 2-year-old son, Jayden.

“It was different,” Ateman said. “Replays and stuff like that. More chill. … You’re rooting for them like you’re watching Oklahoma State.”

This fourth Raiders game will be unlike the others. Ateman, a seventh-round pick, will make his NFL regular-season debut Sunday against the Arizona Cardinals. His role follows a string of injuries at the position. Wide receiver Martavis Bryant (knee) could miss multiple games, and wide receiver Jordy Nelson (knee) is considered questionable, coach Jon Gruden said.

Neither Bryant nor Nelson practiced Wednesday.

Ateman was promoted to the roster on Oct. 23, one day after wide receiver Amari Cooper was traded to the Dallas Cowboys. He stood on the sideline for home games against the Indianapolis Colts and Los Angeles Chargers as well as one road game versus the San Francisco 49ers.

His access to the action differed from his living room.

He used the vantage point to his advantage.

“One thing that really stuck out is during games,” quarterback Derek Carr said, “he’ll come up to me and ask questions. Not in a bothersome way or anything like that. Just, ‘Hey, what did you see here? What if they ran the route like this?’ So I can tell that he’s not just here, taking a redshirt year, enjoying his time wearing the team colors. He’s really put in a lot of work, and it means something to him.

“He’s shown that, so hopefully he just goes out there and cuts it loose because he’s done all the right things. Now, he’s just got to go play.”

Ateman’s 6-foot-5-inch size is partly what attracted the Raiders to select him.

Upon joining the team, coaches and teammates came to appreciate his seemingly daily knack for a big play in practice. In training camp, Ateman worked with the first-team offense at times. Carr exhibited the trust in him to process a check made at the line of scrimmage and apply the adjustment moments later once the play began.

Sunday will be the Raiders’ first regular-season game that Ateman used an airplane to attend.

His girlfriend and son won’t be there, he said. Traveling at age 2 won’t do. So they will be home, watching from the living room, a place Ateman knows well.

But this time, Jayden can see his father on television rather than on the couch beside him.

“She’ll probably record him watching the game because he actually watches the ball,” Ateman said. “He doesn’t always know what’s going on, but he likes watching the TV. He says, ‘Down, set, hut.’ His version of it. He tries. It’s pretty cool.”