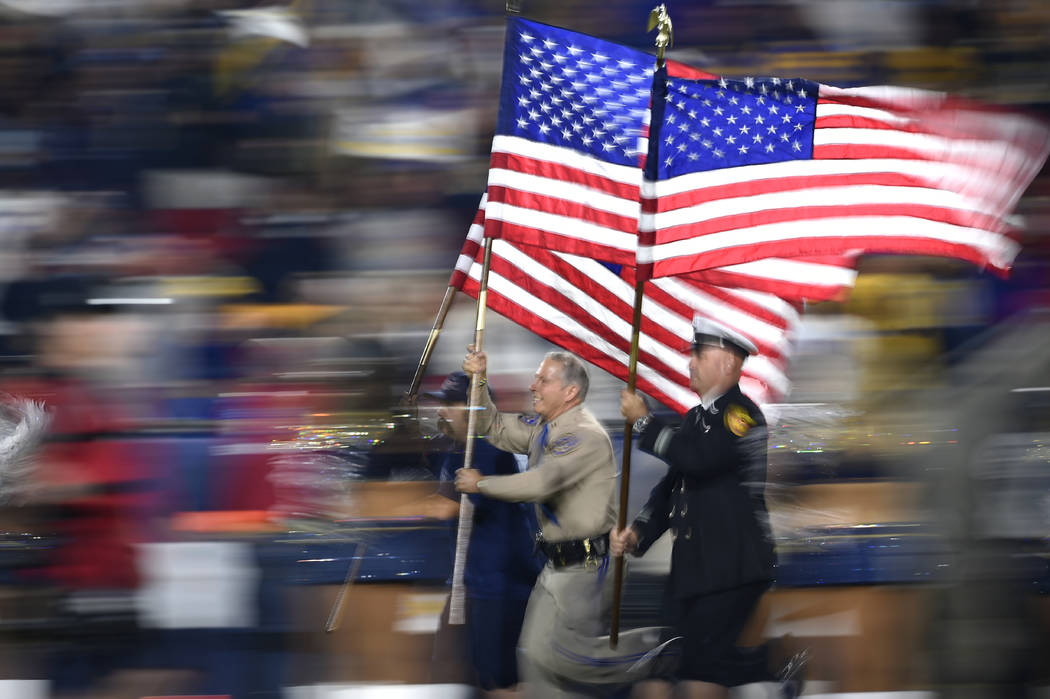 Fire and and law enforcement first responders run with United States flags as they lead players out of the tunnel before an NFL football game between the Los Angeles Rams and the Kansas City Chiefs, Monday, Nov. 19, 2018, in Los Angeles. (AP Photo/Kelvin Kuo) 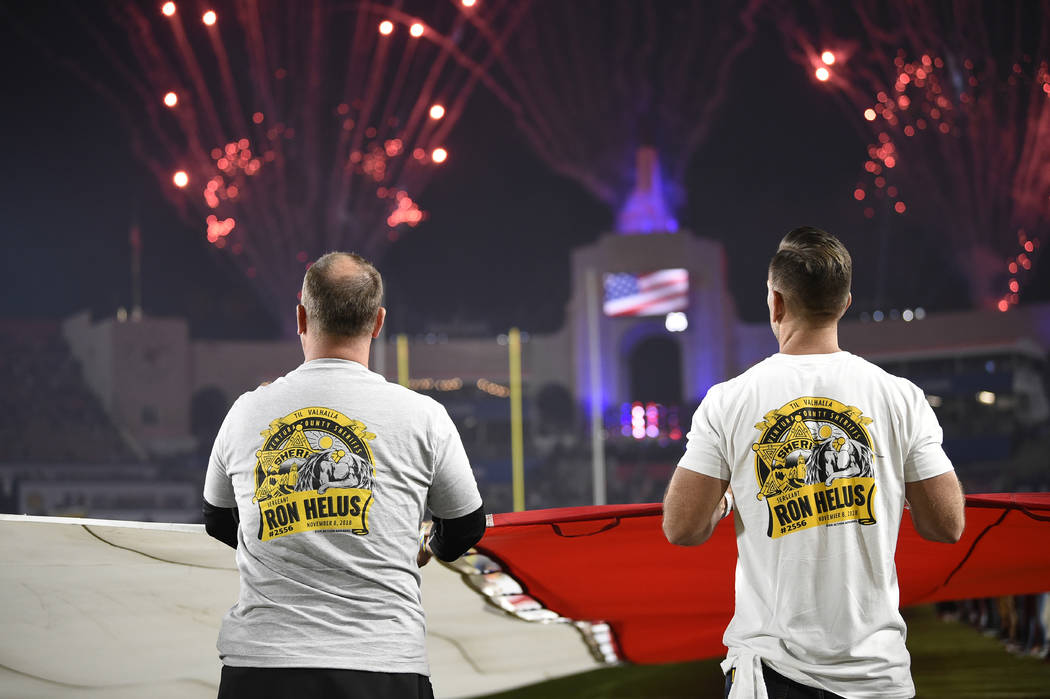 LOS ANGELES — After having the toughest two weeks of his firefighting career, Ken Roberts spent his first night off at one of the NFL’s most anticipated games of the season.

The Ventura County Fire Department Captain was one of many honored by the Los Angeles Rams during Monday night’s game against the Kansas City Chiefs. Roberts was one of many first responders who received tickets to the game as the Rams honored those impacted the past two weeks by the shooting at a Thousand Oaks bar and Southern California wildfires.

“The past couple weeks as a firefighter is the toughest I have experienced,” Roberts said. “To have one monumental event and have the active shooter was enough for one whole career. Then you add on a fire that impacts the exact same area, we just didn’t have a chance to breathe.”

The Rams train in Thousand Oaks, where 12 people were killed in a mass shooting at a country music bar on Nov. 7. The next day a pair of wildfires broke out in Ventura and Los Angeles counties, forcing thousands of people to flee.

Roberts got off work Monday morning. He then picked up his wife and son before heading to the LA Memorial Coliseum to enjoy the game with friends and colleagues. The game was originally scheduled to be played in Mexico City before the NFL moved it back to Los Angeles due to poor field conditions.

“To come together, take a deep breath and watch some good football is monumental,” Roberts said.

The Thousand Oaks Titans youth football team, who trained at the Rams facility last Friday before its Pacific Youth Football League final, were also at the game after being treated to a pregame VIP tailgate party.

“It was very hard. We had kids coming in from as far as San Bernardino and Long Beach where they had been relocated. They came every night, just sometimes we didn’t have fields to practice on,” coach Steve Szakos said.

Several of the 25 players — including quarterback Jacob Poley — were evacuated from their homes. Poley and his family have returned home, which is still standing.

“This has taught me to be more thankful and that nothing is for granted. You have to appreciate everything,” the 14-year old Poley said.

The California Lutheran University Choir sang the National Anthem and were joined by first responders, who held the flag. Cal Lutheran alumnus Justin Meek, who was one of the 12 victims in the shooting, was a member of the choir for four years.

“They are honored to be singing and share in everything. For these students to go back out and be with other people is good,” choir director Wyant Morton said.

Ventura County Sheriff sergeants Jason Robarts and Dave Brantley both knew Helus for over 25 years and said that he would be overwhelmed with the outpouring of support for his family.

“Seeing everyone come out it makes you get through it a lot easier,” Robarts said. “The guy was one of the most tactically sound. If there was someone I wanted to go in and deal with a situation it was this guy. What is hard is we had the right person doing the job.”

Dylan and Derek Adler, the 17- and 12-year old sons of Sean Adler, served as honorary water boys for the game. Sean Adler was a member of the security team at the bar.

“It’s a way to get my mind off everything. It’s almost overwhelming what people are willing to do for us,” Dylan Adler said.

Kevin Demoff, the Rams Chief Operating Officer and Executive Vice President of Football Operations, said after the Rams 54-51 victory that the game was one way for the organization to show its appreciation to everyone.

“Right after the Borderline shooting you are trying to figure out how to lead your community and 12 hours later you are wondering if you are even going to have a community,” he said. “Our organization saw it not as a challenge but really an opportunity to put the best of Los Angeles and its people on display and I think you saw that tonight.”