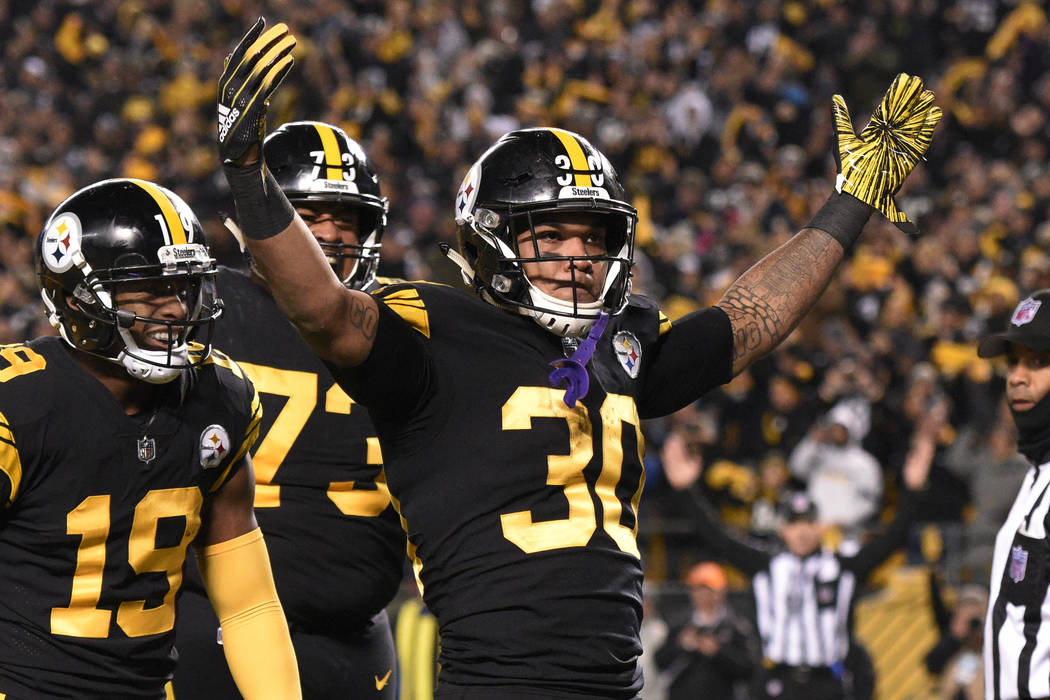 Pittsburgh Steelers running back James Conner (30) celebrates his touchdown against the Carolina Panthers during the first half of an NFL football game in Pittsburgh, Thursday, Nov. 8, 2018. (AP Photo/Don Wright) 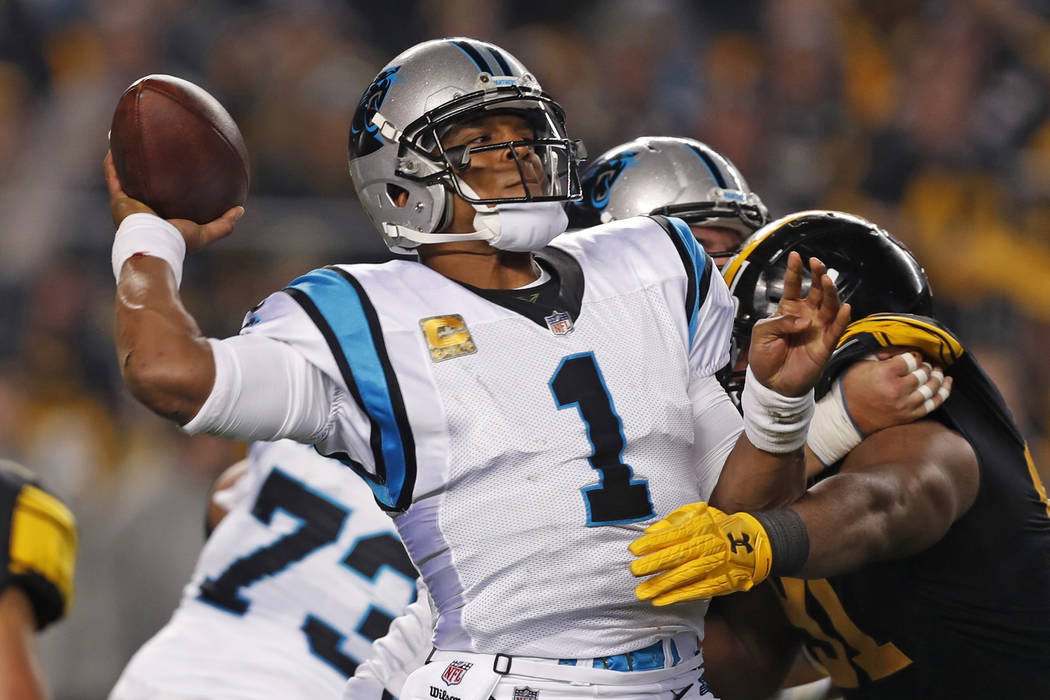 Carolina Panthers quarterback Cam Newton (1) throws a pass during the first half of the team's NFL football game against the Pittsburgh Steelers in Pittsburgh, Thursday, Nov. 8, 2018. (AP Photo/Keith Srakocic) 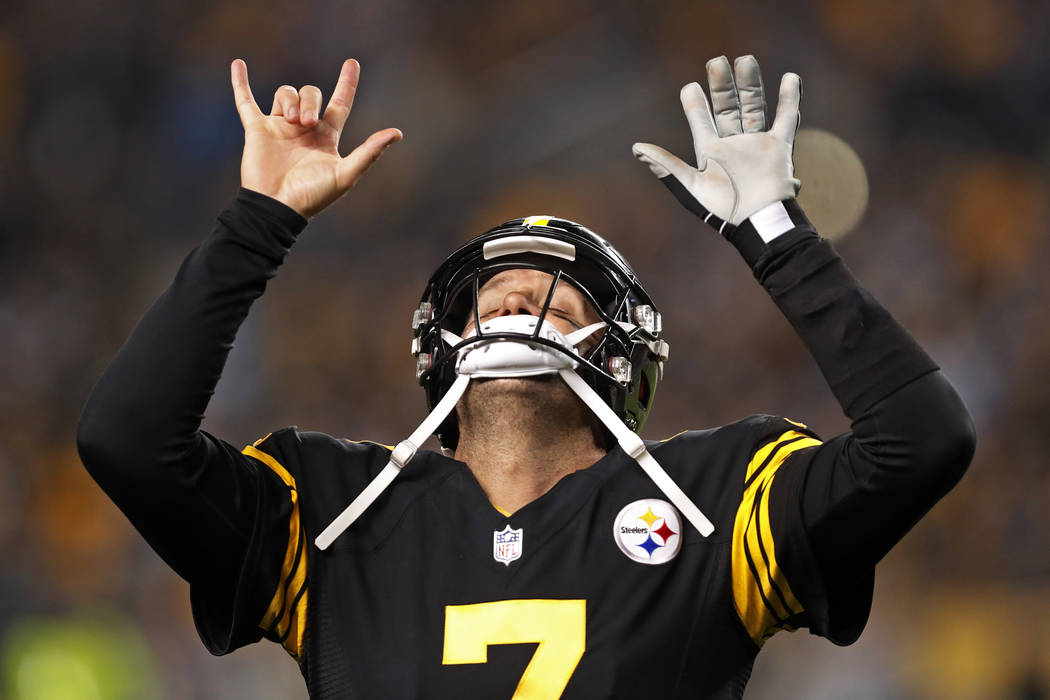 Pittsburgh Steelers quarterback Ben Roethlisberger (7) celebrates a touchdown pass to Antonio Brown during the first half of an NFL football game against the Carolina Panthers in Pittsburgh, Thursday, Nov. 8, 2018. (AP Photo/Keith Srakocic) 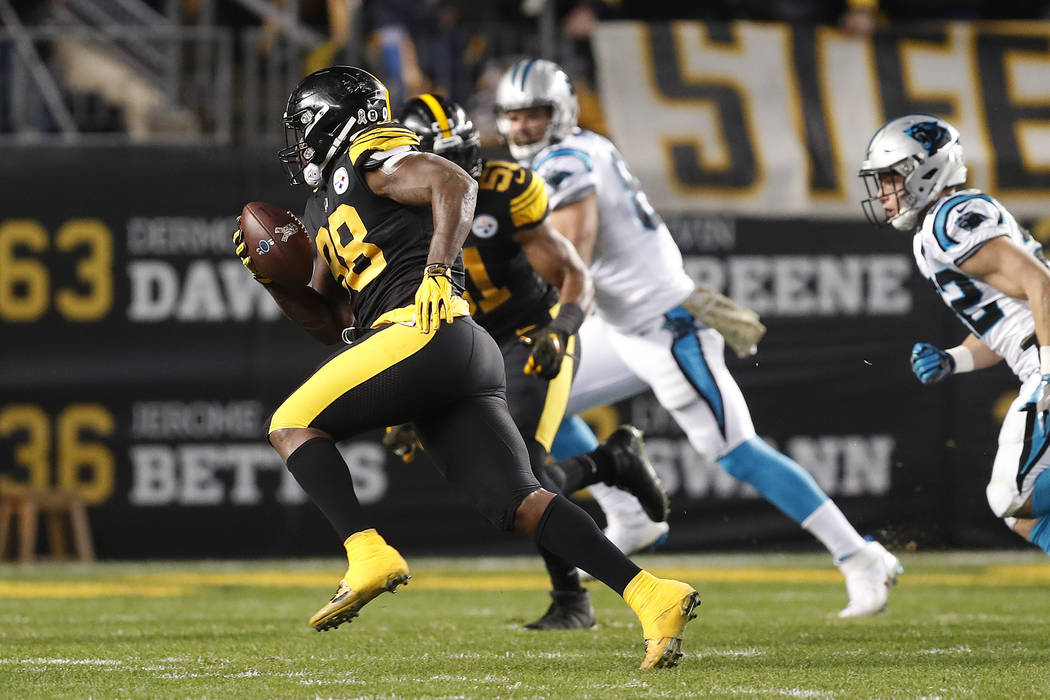 Pittsburgh Steelers inside linebacker Vince Williams (98) returns an interception for a touchdown during the first half of the team's NFL football game against the Carolina Panthers in Pittsburgh, Thursday, Nov. 8, 2018. (AP Photo/Keith Srakocic)

Ben Roethlisberger threw for 328 yards and five touchdowns, James Conner ran for 65 yards and a score before leaving late with a possible concussion and the Steelers pounded the Carolina Panthers 52-21 on Thursday night for their fifth straight victory.

Antonio Brown added eight receptions for 96 yards — including a 53-yard touchdown in the second quarter — to cap an eventful day that began with the star wide receiver being cited for reckless driving after police clocked Brown’s Porsche driving over 100 mph down a busy highway in the northern city suburbs.

While Bell — a three-time Pro Bowl running back who still hasn’t signed his one-year franchise tender — tweeted his thoughts as he watched on television, the Steelers (6-2-1) rolled on without him. Bell has until next Tuesday to sign a contract if he wants to play this season. His teammates have long since tired of talking about Bell’s status and at this point, the AFC North leaders appear to be doing just fine on their own.

Carolina not so much.

The Panthers (6-3) saw their three-game winning streak come to an abrupt halt in a city where they’ve never won. Carolina fell to 0-4 all-time in Pittsburgh and was never really in it after the Steelers scored 21 points in the game’s first 11 minutes.

Cam Newton completed 23 of 29 for 193 yards and a pair of flips to Christian McCaffrey that the second-year running back turned into scores but Newton’s showdown with Roethlisberger never materialized. The Steelers sacked Newton five times and rarely let him get comfortable.

Newton didn’t help matters when he threw off his back foot out of the Carolina end zone while trying to avoid getting sacked in the first quarter. Pittsburgh linebacker Vince Williams raced under the floater and returned it 17 yards for a touchdown to give the Steelers a 14-7 lead they never came close to relinquishing.

Pittsburgh’s 52 points matched the most ever surrendered by the Panthers in franchise history. Carolina allowed the same total in a 52-9 loss to Oakland on Dec. 24, 2000.

The Steelers held the 36-year-old Roethlisberger out of practice during the short week in an effort to keep him fresh. Roethlisberger responded with one of the finest performances of his career, completing 22 of 25 passes while spreading the ball to nine different players on his way to a perfect quarterback rating of 158.3.

Roethlisberger’s first pass turned into a 75-yard touchdown pass to JuJu Smith-Schuster on Pittsburgh’s first offensive snap and his last came on a 6-yard toss to rookie Jaylen Samuels on the first play of the fourth quarter.

In between he did a little bit of everything. Roethlisberger even showed off his legs, scrambling for 18 yards in the third quarter on a play that ended with Carolina safety Eric Reid getting ejected for targeting after Reid appeared to dive at Roethlisberger’s head as the quarterback attempted to slide.

Reed, signed by Carolina in September six months after filing a grievance alleging collusion by the NFL to prevent teams from signing him because of his participation in racial injustice protests during the national anthem alongside former San Francisco 49ers teammate Colin Kaepernick, went out to shake Roethlisberger’s hand as a peace offering before making his way to the Carolina locker room.

Panthers: Travel to Detroit on Nov. 18 to take on the Lions. Carolina is 6-2 all-time against Detroit.

Steelers: Visit Jacksonville on Nov. 18. The Jaguars beat Pittsburgh twice on the road last season, including a 45-42 upset in the divisional round of the playoffs.