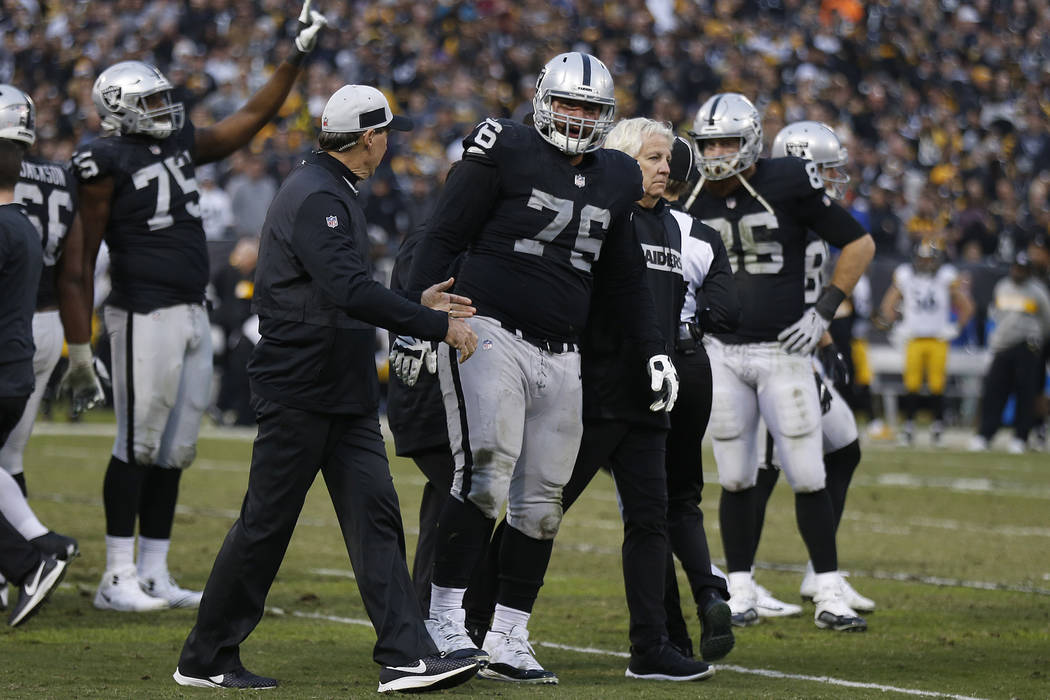 Oakland Raiders offensive guard Jon Feliciano (76) is helped off the field during the second half of an NFL football game against the Pittsburgh Steelers in Oakland, Calif., Sunday, Dec. 9, 2018. (AP Photo/D. Ross Cameron) 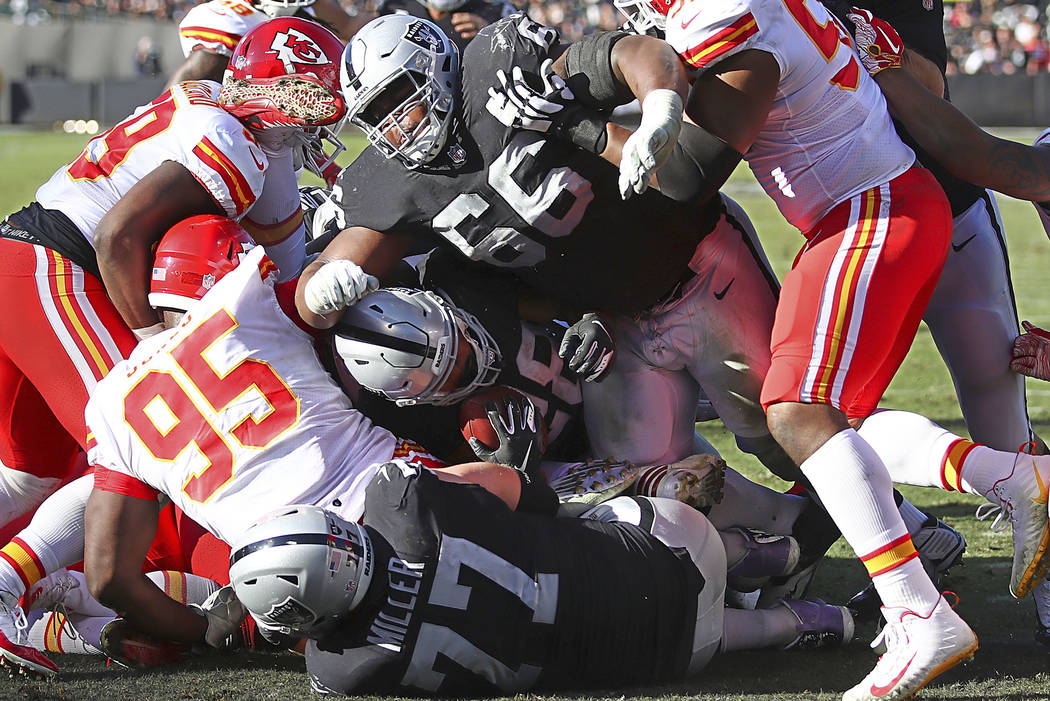 Oakland Raiders running back Doug Martin, center, scores a touchdown behind guard Gabe Jackson (66) during the first half of an NFL football game against the Kansas City Chiefs in Oakland, Calif., Sunday, Dec. 2, 2018. (AP Photo/Ben Margot) 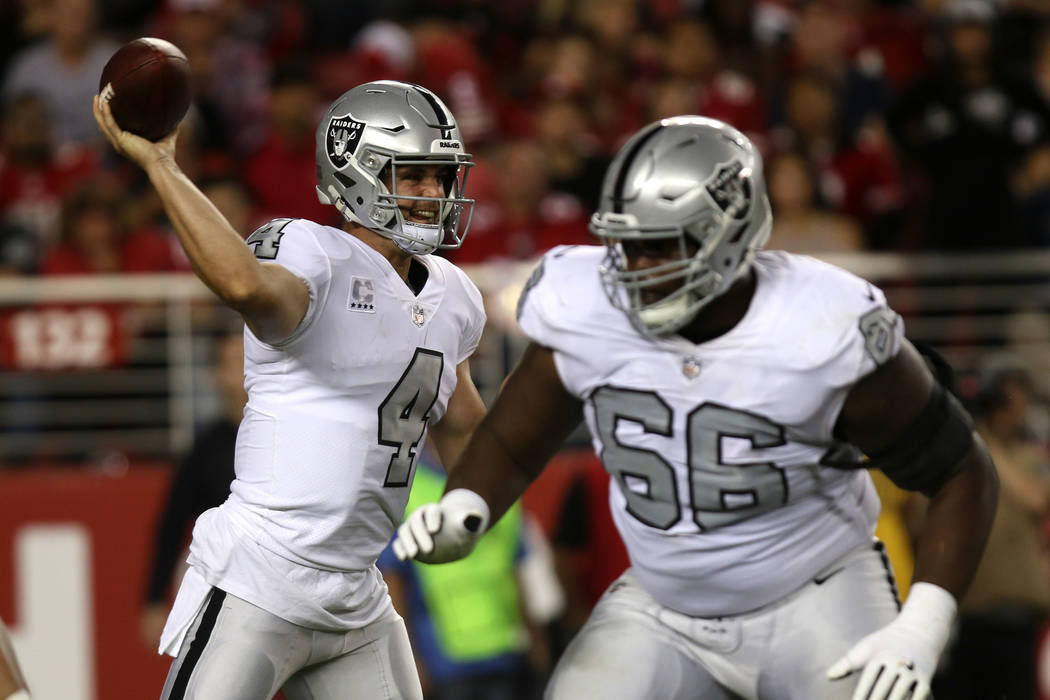 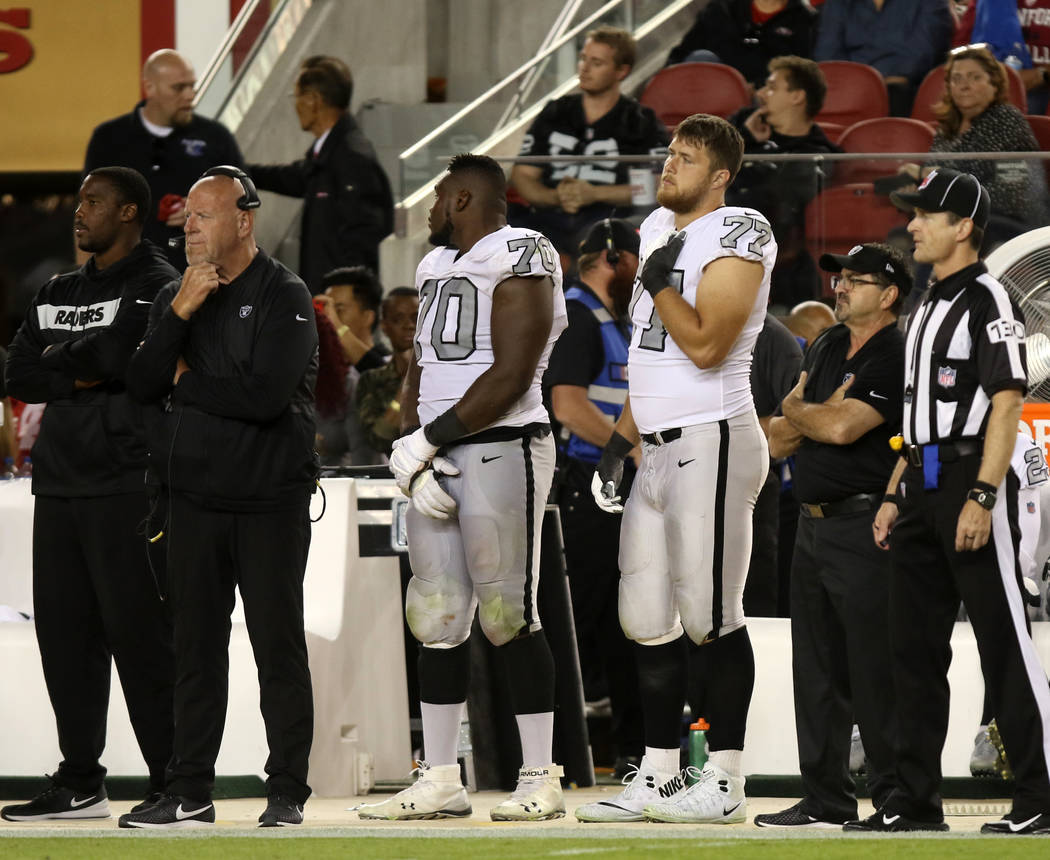 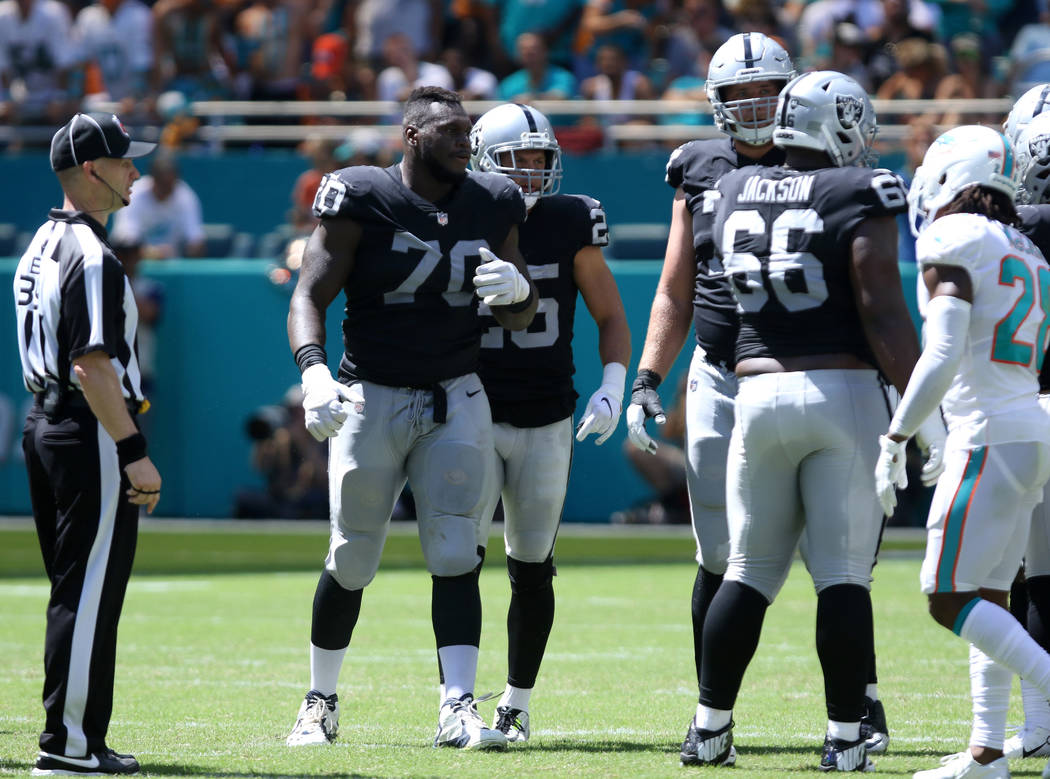 ALAMEDA, Calif. — Jon Gruden has shown Raiders players an array of film footage in meetings this season. He has highlighted various details from practices and games. He has scouted opponents. He even has dug into the archives, reliving the reels of NFL legends from decades ago.

He presented a play not for its design or execution.

He pointed out its toughness.

“That was the first time he ever showed a video like, ‘Hey, look at this grit,’” Richard said.

It’s no surprise that player was a Raiders offensive lineman. Between knee injuries, ankle woes, pectoral problems, rib damage, elbow wreck and so forth, the list of ailments in 2018 would turn head athletic trainer H. Rod Martin’s hair white if it wasn’t white already. When possible, the linemen have played through pain. The toll, however, could impact Sunday’s lineup against the Cincinnati Bengals.

Feliciano, whose toughness during Sunday’s 24-21 win over the Pittsburgh Steelers was the subject of Gruden’s film focus, was placed on injured reserve this week. Osemele and Jackson didn’t practice Wednesday or Thursday.

The guards’ statuses for Cincinnati are unclear.

“I know that both of them are as tough as they come,” Gruden said, “and if there’s a will, there’s a way. They have the will. I know that. We’ll just hope for the best. Like we’ve done at other positions on offense, we’ll have to rally around the next guy up.”

Chaz Green, a 2015 Dallas Cowboys third-round pick, is practicing this week at first-team left guard. He was signed two weeks ago and hasn’t appeared on offense in an NFL regular-season game this season. Denzelle Good is practicing at first-team right guard. The Raiders claimed him off waivers from the Indianapolis Colts last week. All 119 of his offensive snaps this season came at right tackle.

Cameron Hunt, the Raiders’ new backup center, was re-signed this week. The team waived him Sept. 1 as part of its roster cutdown. He remained a free agent until the club called.

Injuries are nothing new to the unit.

Among those affected, Hudson (ankle) and Jackson (pec) have been limited since the Sept. 10 opener. Yet, they are the team’s only players who have appeared on all 855 offensive snaps in 2018. Jackson continued his streak Sunday despite a left elbow injury in the second quarter and sprained ankle on the game-winning drive.

“I would use the term ‘grit,’ ” offensive line coach Tom Cable said. “It goes to (left tackle Kolton Miller) with a knee injury early, an elbow injury early. Then you got K.O., who has a knee injury and then he’s got a foot injury. Rodney, the same thing. They all have some specific ailments, but they’ve all kept battling. The meaning of grit is perseverance and really not backing down. They’ve been able to get themselves treated and rehabilitated during the week and get back out there when it’s possible. I think that speaks volumes to them.”

He started Sunday at left guard for Osemele and suffered a calf injury on second-and-goal late in the fourth quarter. He barely could stand, unable to place sufficient pressure on his left leg. Yet, he blocked on quarterback Derek Carr’s 5-yard touchdown to tight end Derek Carrier on fourth-and-goal.

“I’ve never seen a display of toughness like that in person,” Good said. “You always see it in the ESPN highlight reels. You see the baseball player (Curt Schilling) with the bloody ankle and stuff like that. It’s just crazy to see something like that. I literally saw Jon block a play with one leg, hopping around. Gabe was the same: one arm and still doing his job. It just shows how the guys love the game and how much they wanted that win.”

Said Jackson: “We’ve got a room full of fighters.”