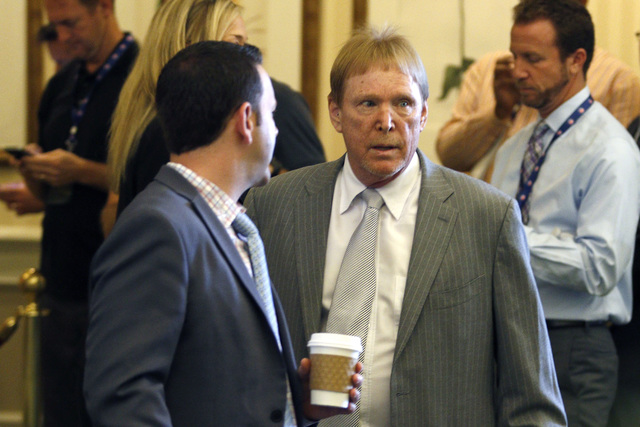 A timeline of the Oakland Raiders:

1982: Raiders relocate from Oakland to Los Angeles to play at the Memorial Coliseum.

June 23, 1995: Raiders leave Los Angeles to move back to Oakland for a renovated Oakland-Alameda County Coliseum.

July 29, 2014: Mark Davis, who inherited the team following his father’s death in 2011, confirmed he talked to San Antonio officials about moving the team to Texas.

April 15, 2015: The stadium plan for the Chargers and Raiders collects enough petition signatures to go before the city council.

May 19, 2015: The transaction for a land deal of 170 acres closes in Carson, paving the way for a football stadium to be built. The project awaits approval from the NFL.

Oct. 30, 2015: Davis tells Oakland town hall that he is committed to finding a stadium solution in Oakland if a stadium can be built.

Jan. 4, 2016: After talks for a new stadium go nowhere, the Raiders, along with the Rams and Chargers, file paperwork to relocate to Los Angeles.

Jan. 12, 2016: The NFL relocation committee votes to back the Raiders-Chargers plan for Carson in the morning.

Jan. 12, 2016: In the afternoon, the NFL owners vote to allow the Rams to move to Los Angeles from St. Louis and give the Chargers first option as a second team in the Rams’ new stadium if they choose to leave San Diego within a year. The Raiders are allotted second option after the Chargers.

Jan. 24, 2016: ESPN reports Raiders are open to moving to San Diego if L.A. option falls through.

Jan. 26, 2016: Multiple reports say the Raiders have begun work on a one-year lease with O.co Coliseum in Oakland.

Jan. 28, 2016: Mark Davis is scheduled to meet with Las Vegas Sands Corp. president Sheldon Adelson about moving the Raiders to a proposed domed stadium near the Strip.

April 28, 2016: Raiders owner Mark Davis announces he would like to move the team to Las Vegas, and pledges $500 million toward a new domed stadium.

May 20, 2016: Patriots owner Robert Kraft tells USA TODAY Sports that the Raiders moving to Las Vegas “would be good for the NFL.”

Aug. 25, 2016: Developers settle on $1.9 billion budget for new stadium, as well as location west of Interstate 15 across from Mandalay Bay.

Sept. 18, 2016: NFL commissioner Roger Goodell says “a lot has to happen” in order for the Raiders to move to Las Vegas.

Sept. 20, 2016: An investment group in Oakland connected to Hall of Fame safety Ronnie Lott offers to purchase Oakland-Alameda Coliseum to prevent the Raiders from leaving the city for Las Vegas or Los Angeles, according to a report from the East Bay Times.

Oct. 10, 2016: A special session of the Nevada legislature begins to discuss financing for a new NFL stadium in Las Vegas.