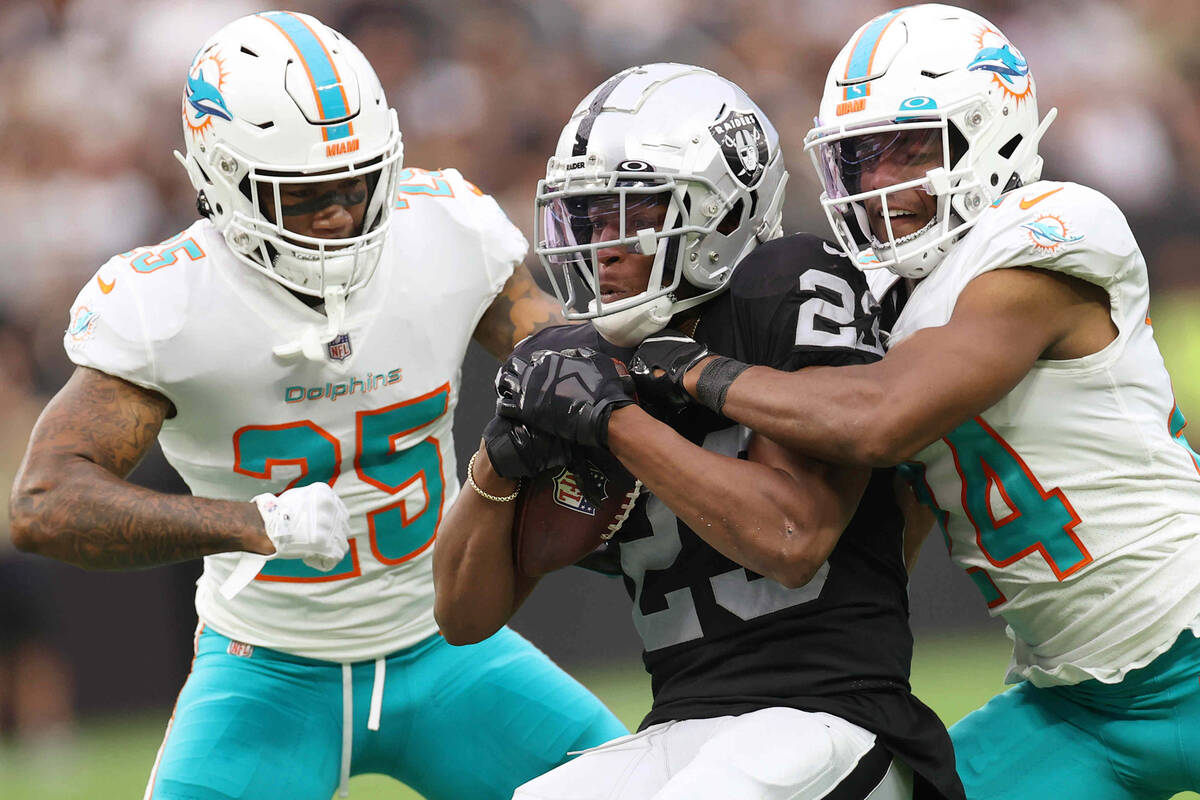 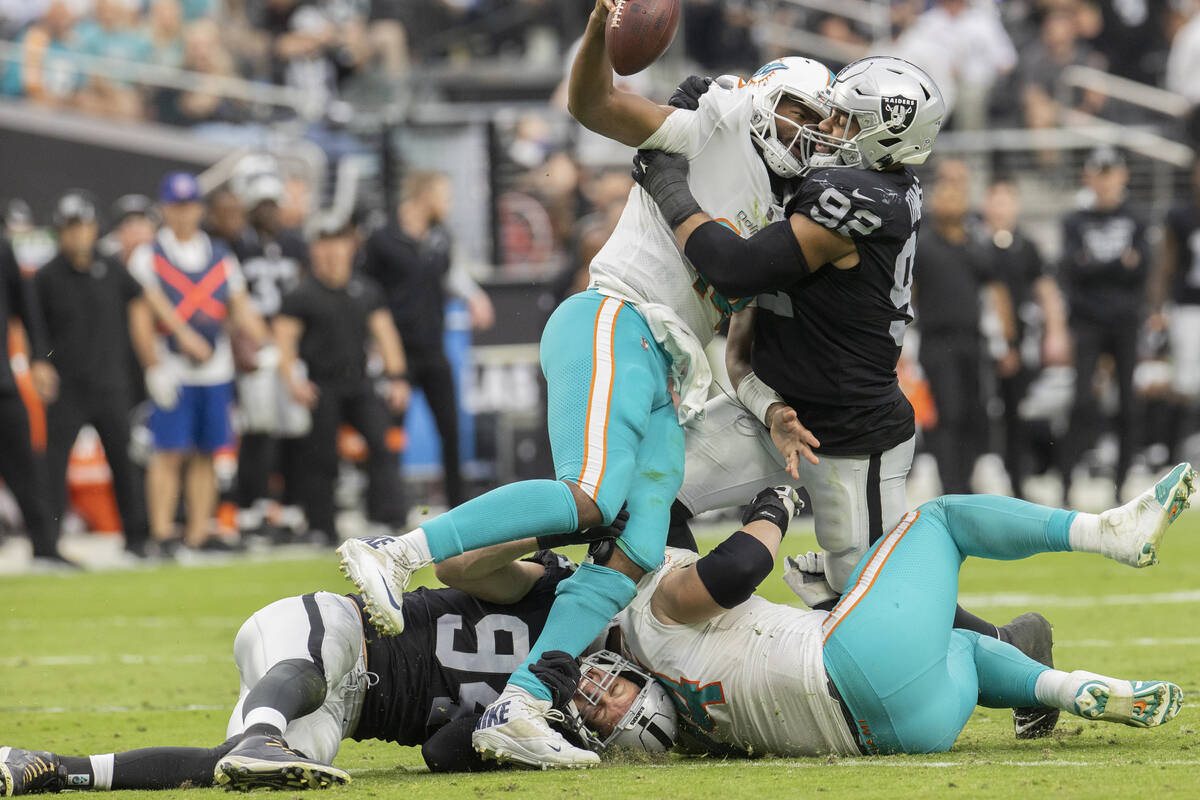 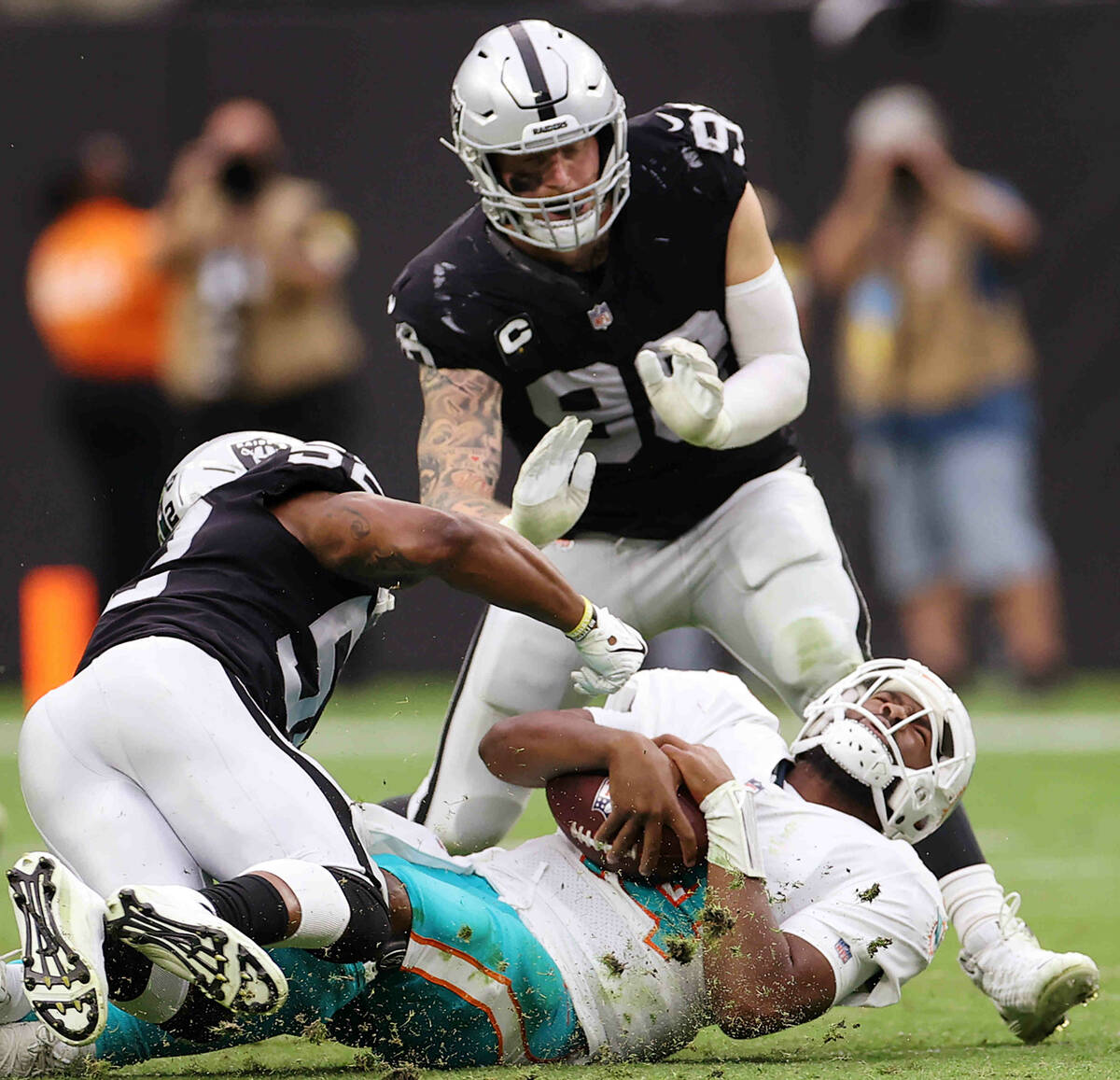 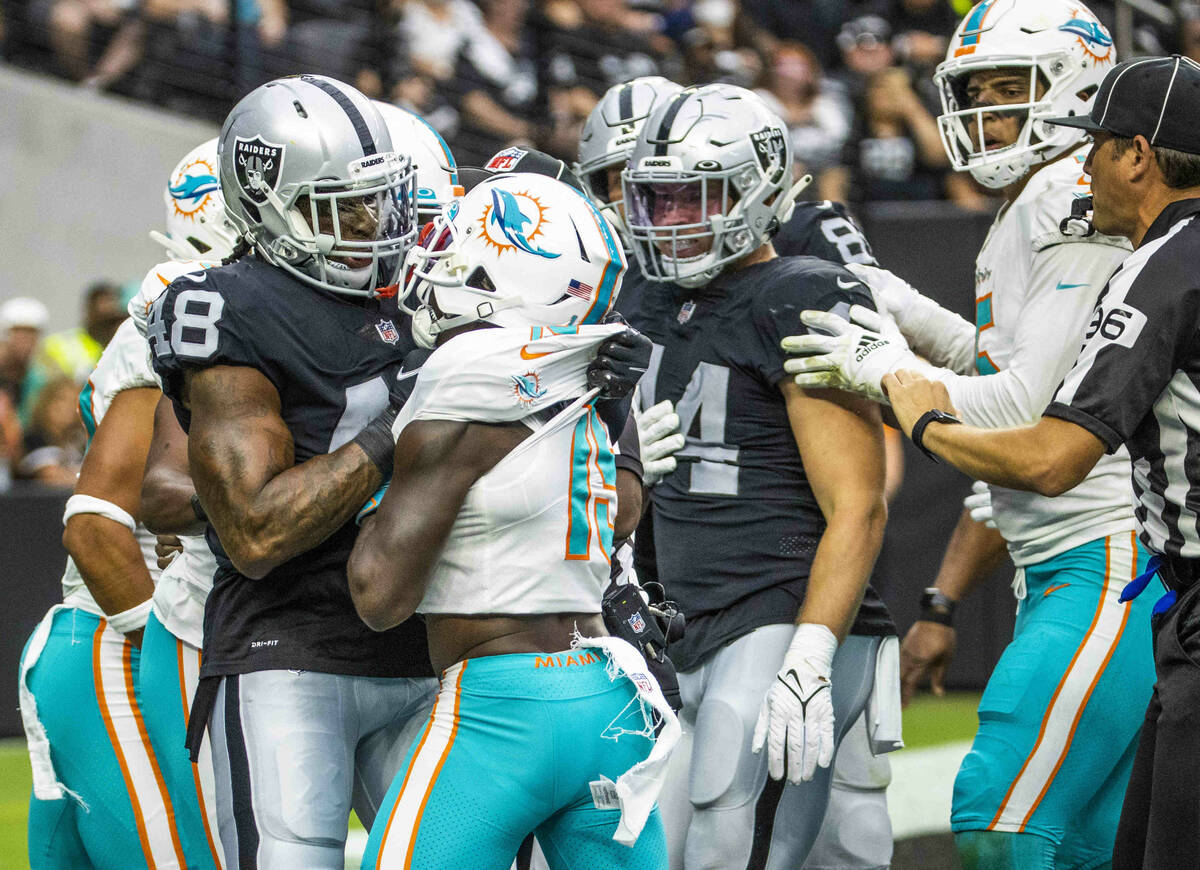 Raiders (48) gets in a fight in the end zone with Miami Dolphins wide receiver Jakeem Grant (19) after a safety in the first half of their NFL game at Allegiant Stadium on Sunday, Sept. 26, 2021, in Las Vegas. (L.E. Baskow/Las Vegas Review-Journal) @Left_Eye_Images 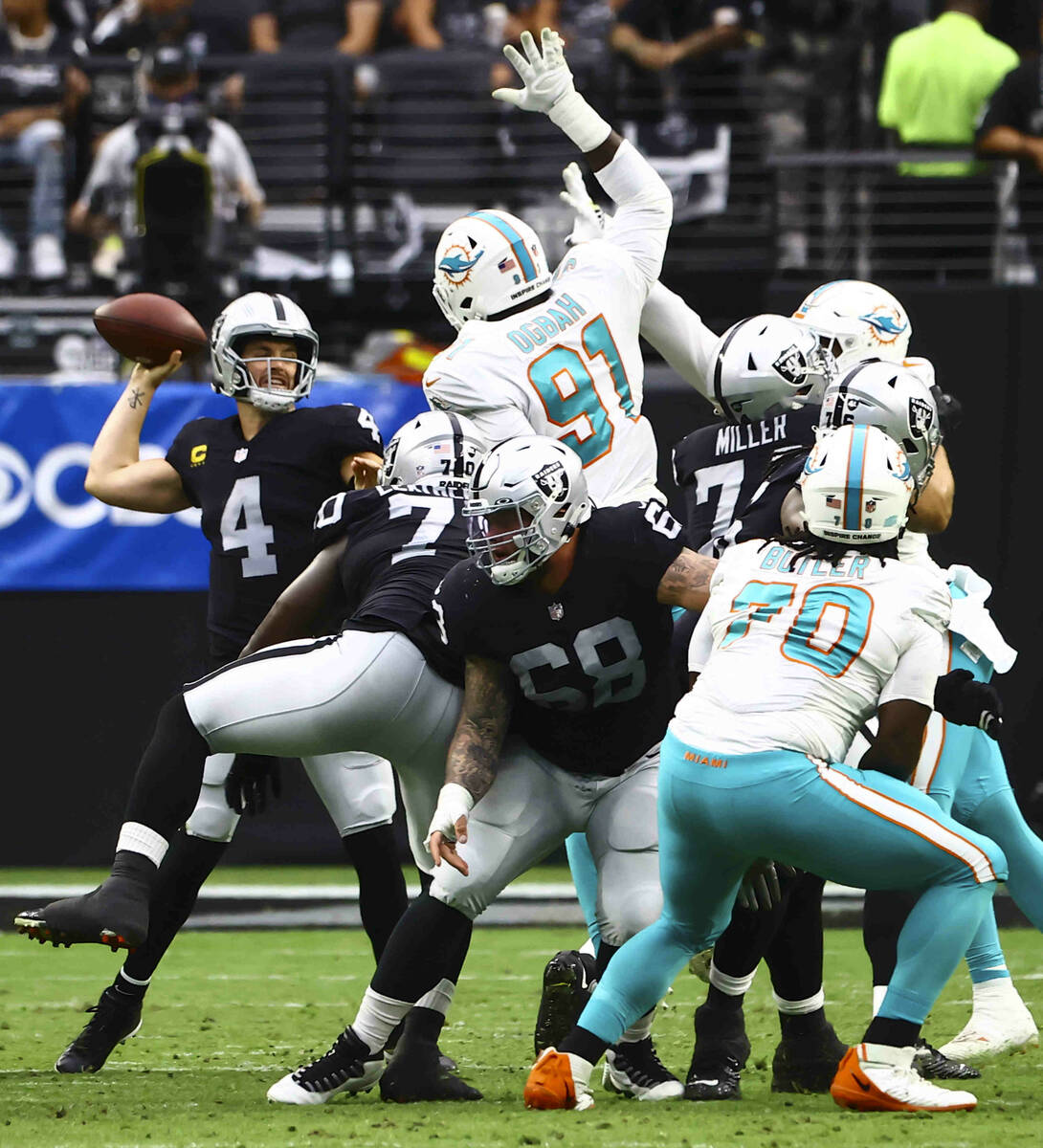 Raiders quarterback Derek Carr (4) looks to throw a pass under pressure from the Miami Dolphins during the first half of NFL game at Allegiant Stadium in Las Vegas on Sunday, Sept. 26, 2021. (Chase Stevens/Las Vegas Review-Journal) @csstevensphoto 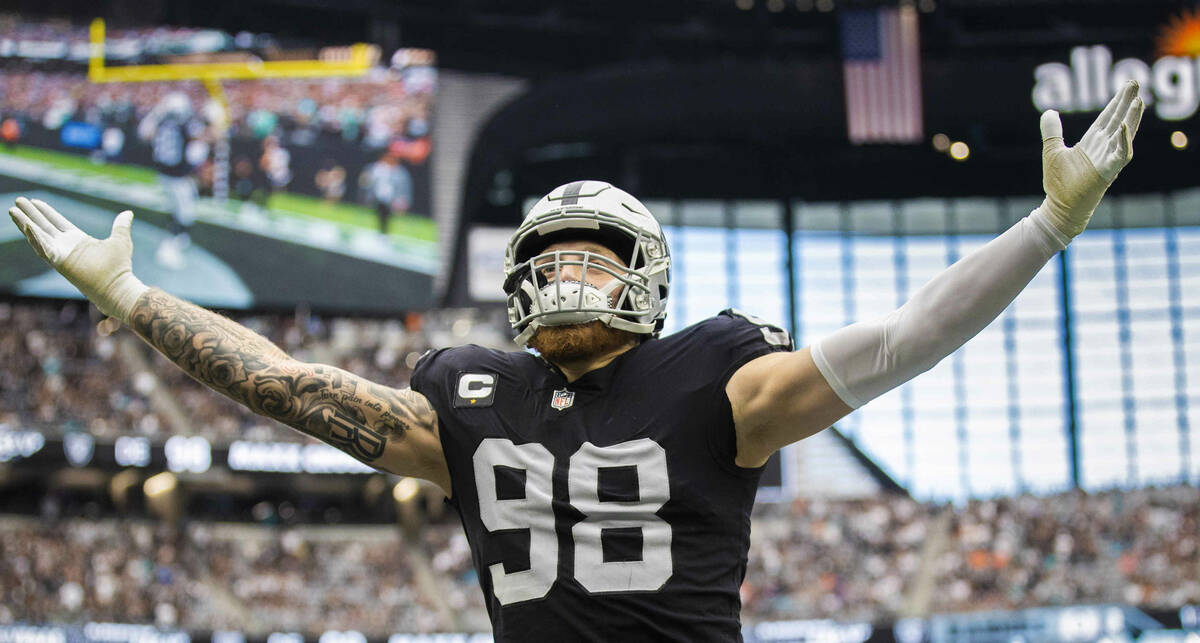 Three takeaways from the Raiders’ 31-28 overtime victory over the Miami Dolphins on Sunday at Allegiant Stadium.

This was the second in three games that have gone to overtime, and the Raiders won both by finding ways to make key plays.

Against the Baltimore Ravens in the opener, it was a forced fumble and touchdown pass. Then against the Dolphins, the Raiders made enough plays to move into field goal range and then stepped up defensively to hold Miami to a field goal.

The biggest play was Johnathan Abram’s breakup of a pass into the end zone that saved the game for the Raiders.

The Raiders survived in overtime, but the game never should have reached that point.

Daniel Carlson missed an extra point that later allowed Miami to get within a possession at 25-17. That miss came back to bite the Raiders when the Dolphins scored a touchdown and two-point conversion with two seconds left to force overtime.

With the Raiders still holding an eight-point lead, they appeared to get the Dolphins off the field with a three-and-out, but defensive end Maxx Crosby gave Miami extra time by roughing the quarterback. The Raiders wound up stopping the Dolphins on downs, but it was more drama than necessary.

The Dolphins, like the Pittsburgh Steelers the week before, did all they could to take Raiders tight end Darren Waller out of the game.

He still produced, as did his teammates to keep the offense moving. Six players were each targeted at least five times as Carr repeatedly found the right player.

That was especially evident in the third quarter when on second-and-19, he found Hunter Renfrow for 10 yards and then a 12-yard touchdown pass to put the Raiders in front 19-14. It was their first lead of the game.