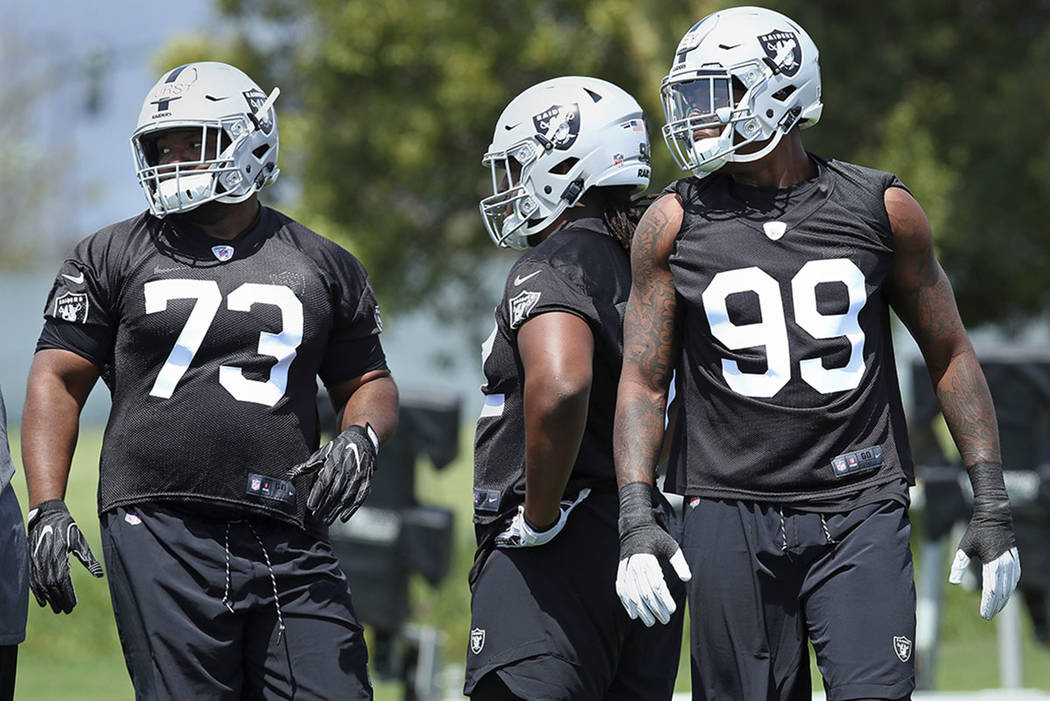 Khalil Mack’s presence was felt Sunday, even if his bullrush wasn’t.

The team held its first padded practice of training camp. At one point, it featured a pass-rush drill that typically is catered to those on defense. The Raiders’ offensive linemen, however, held their own, center Rodney Hudson in particular putting on a clinic with multiple pancake blocks.

From the bleachers, a season ticket holder chimed in.

Sunday was the Raiders defensive end’s third straight missed practice. He is holding out for a new contract.

Arden Key is just as impressive in pads.

The defensive end and rookie third-round pick continues to flash this offseason. The aforementioned drill showcased some slippery inside-rush ability. He also has demonstrated a knack for bending the edge with burst when working against offensive tackles.

“He’s doing a good job of playing the runs how we want him to play the runs,” defensive coordinator Paul Guenther said. “We know he can rush. He’s special that way. Obviously, we came out here in pads today, he showed the same thing he did in shorts. It’s exciting to have him out there.”

Key fell to the third round, in part, because of character and shoulder concerns. His production at Louisiana State also fell off in 2017.

The Raiders kicker was errant on his first field-goal attempt, but he made six of his other seven. The lone miss clanged off the right upright. The final two occurred in simulated game-winning situations with teammates standing near him, their proximity intended to elevate the pressure.

On Friday, Tavecchio was 3-for-6 on field goals to start camp.