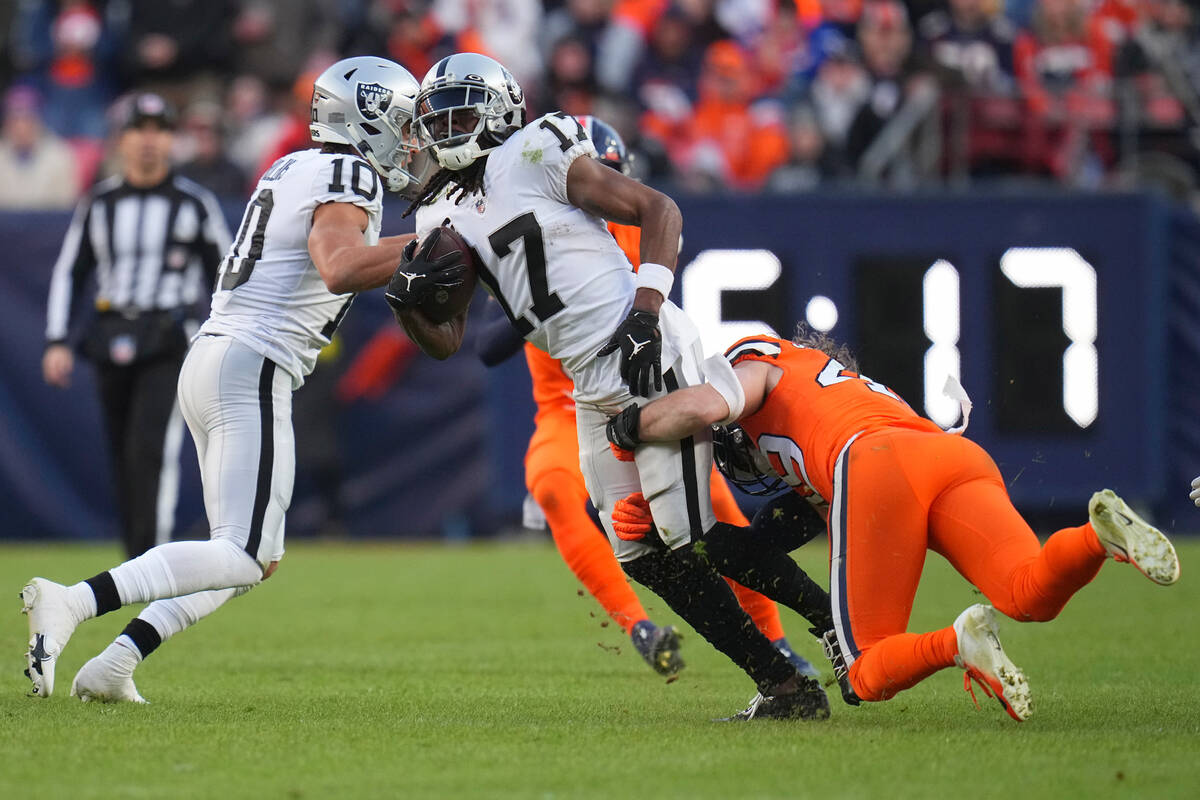 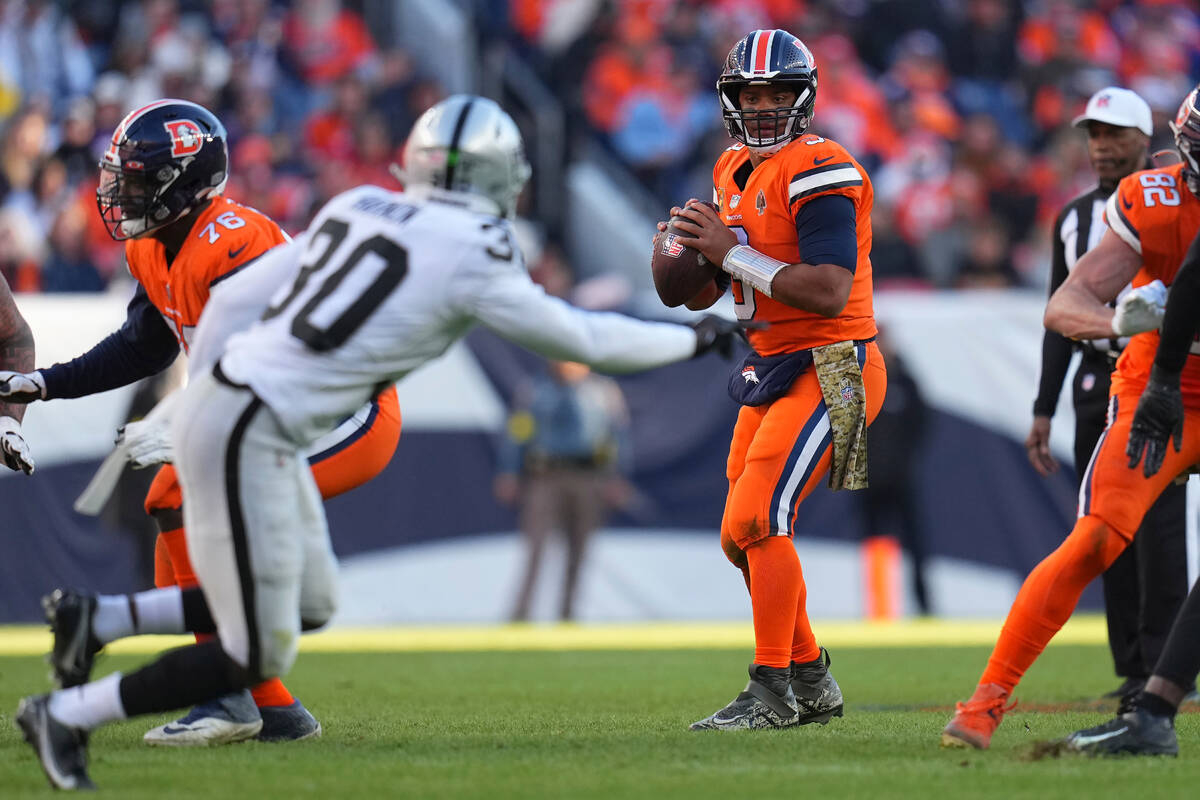 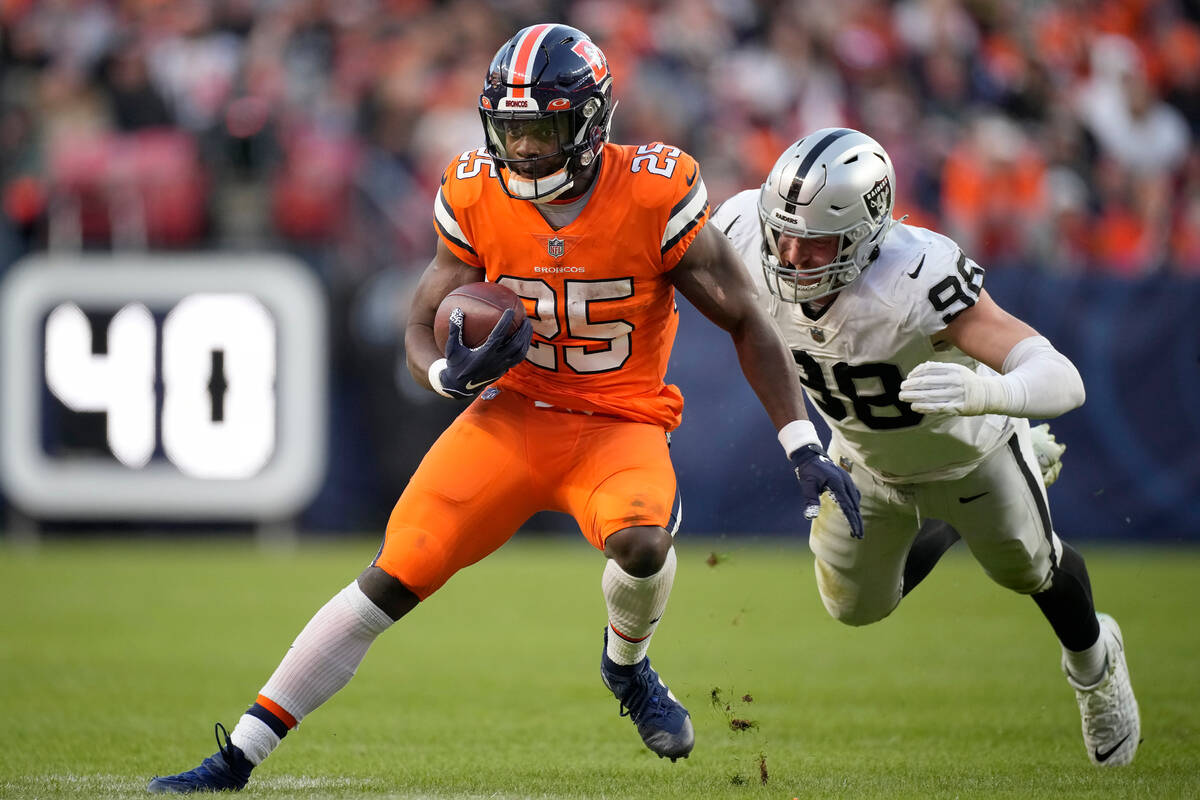 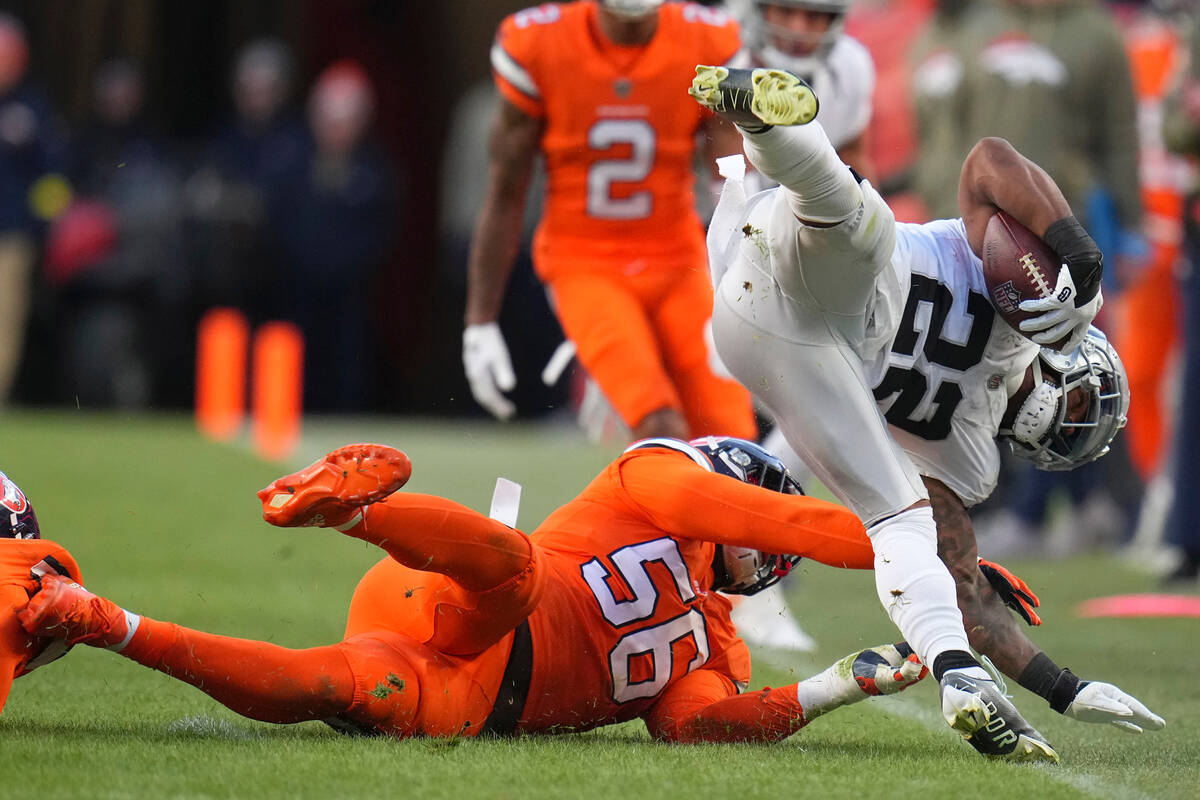 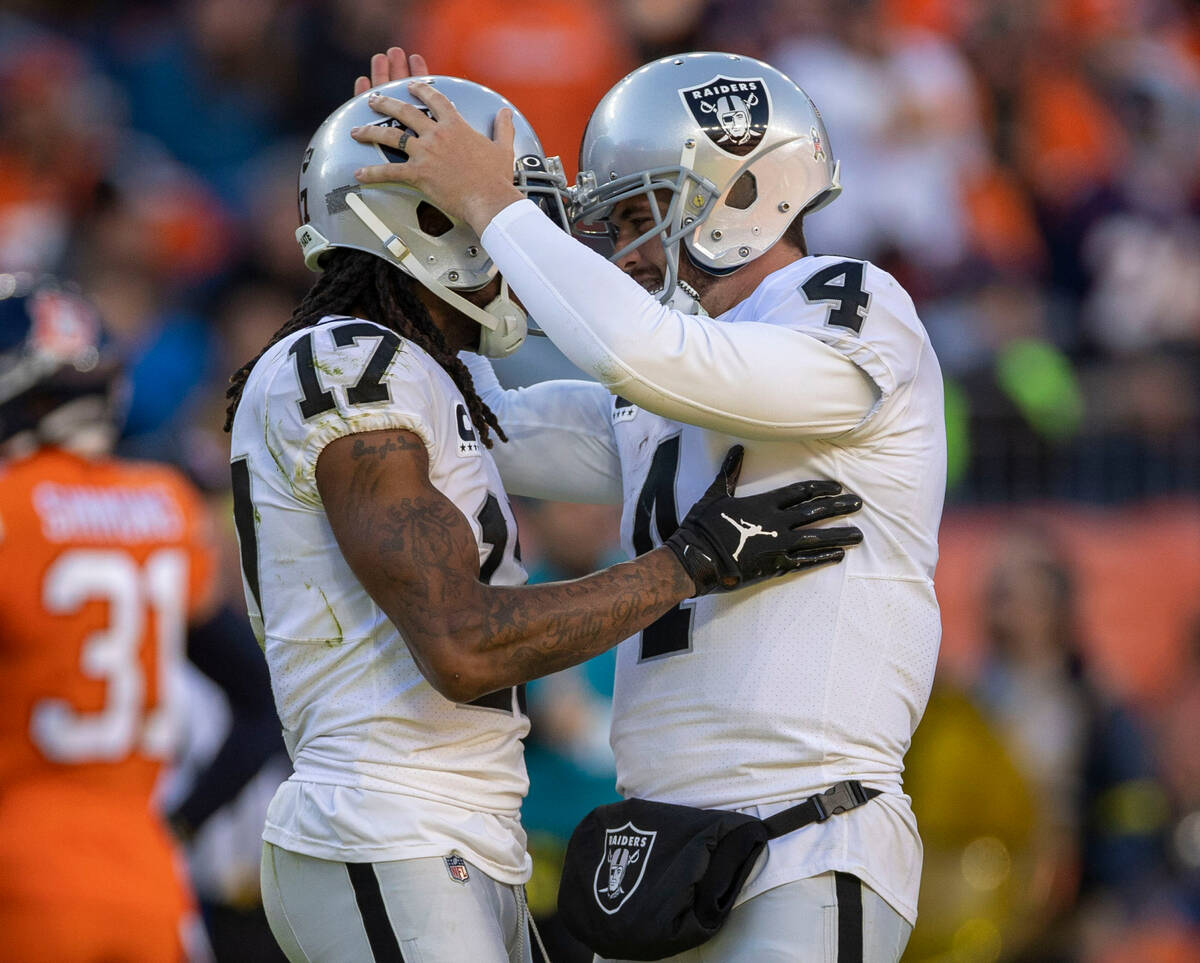 Raiders quarterback Derek Carr (4) congratulates wide receiver Davante Adams (17) after throwing him a touchdown during the first half of an NFL game against the Denver Broncos at Empower Field at Mile High Stadium on Sunday, Nov. 20, 2022, in Denver. (Heidi Fang/Las Vegas Review-Journal) @HeidiFang 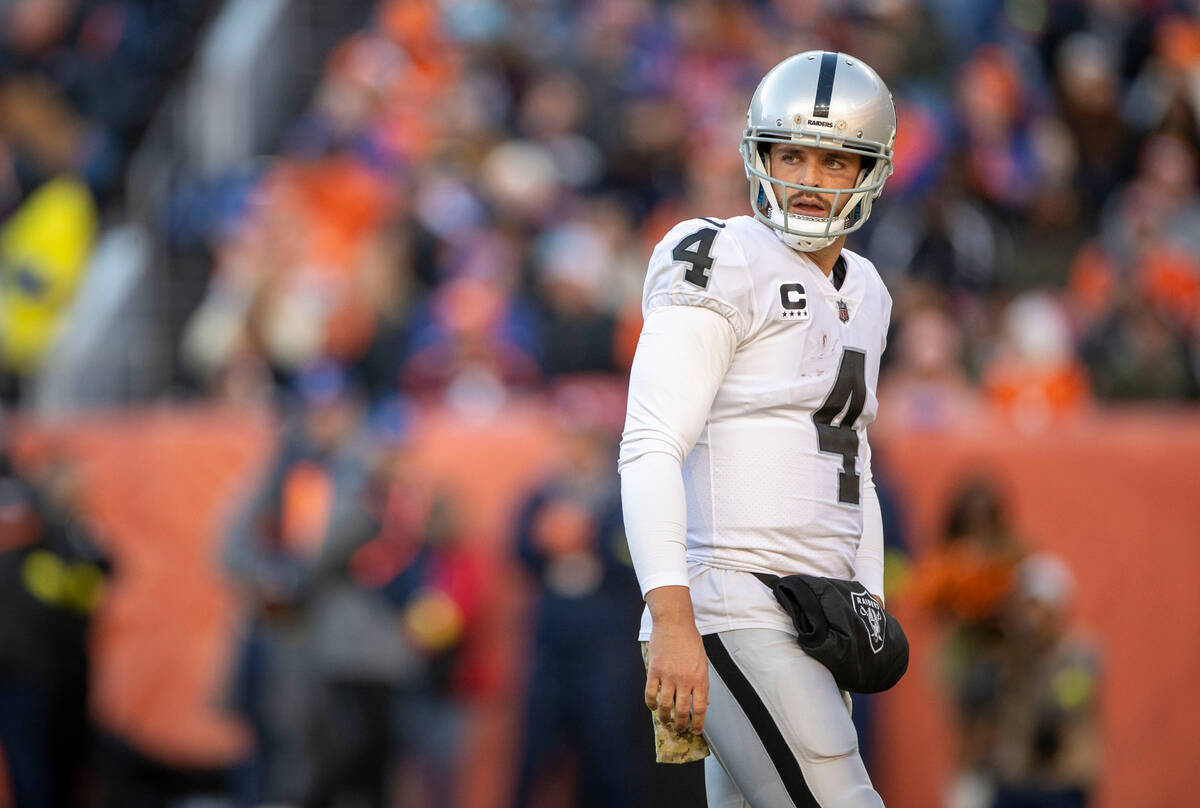 Raiders quarterback Derek Carr (4) walks the field during the first half of an NFL game against the Denver Broncos at Empower Field at Mile High Stadium on Sunday, Nov. 20, 2022, in Denver. (Heidi Fang/Las Vegas Review-Journal) @HeidiFang 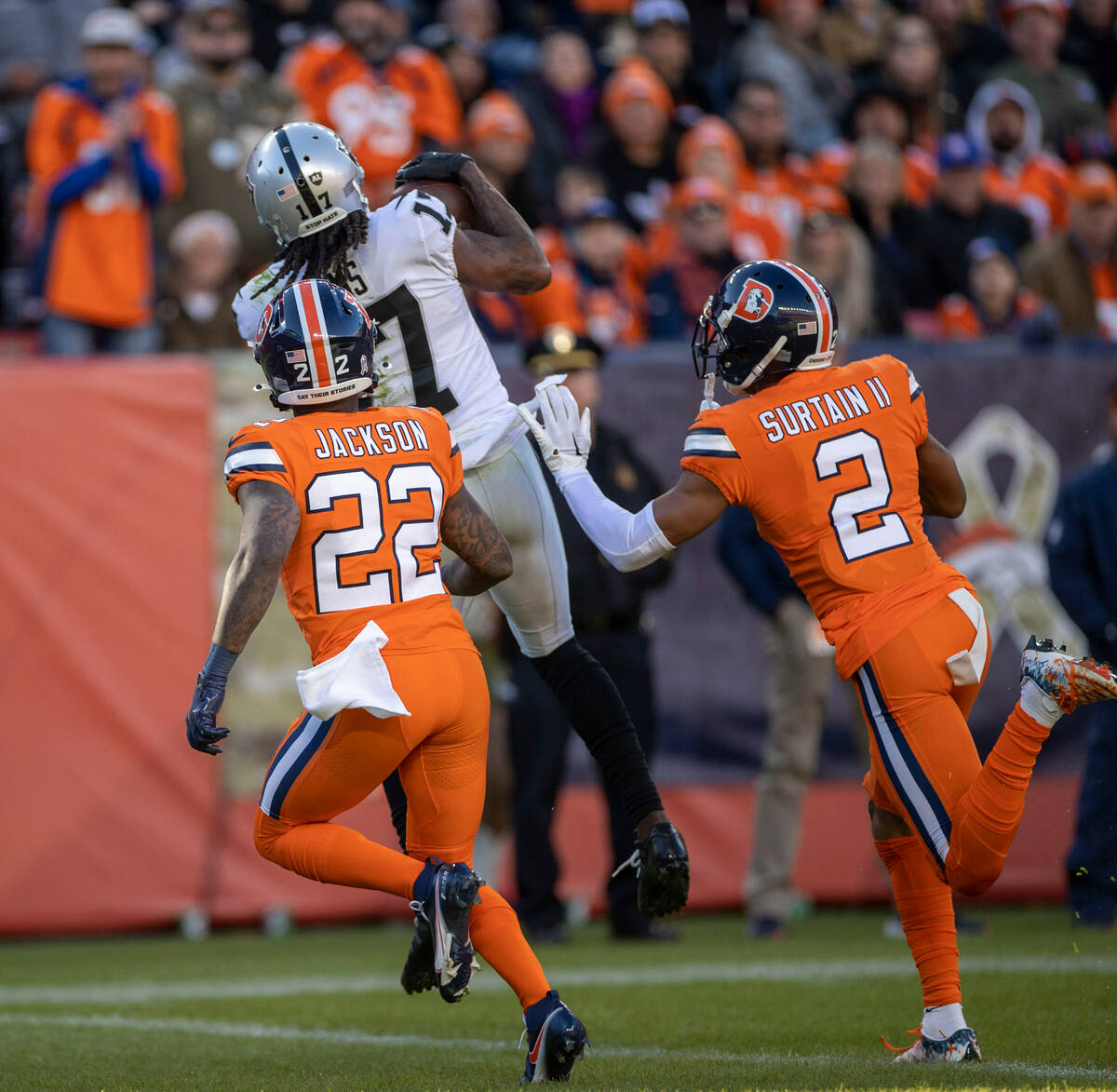 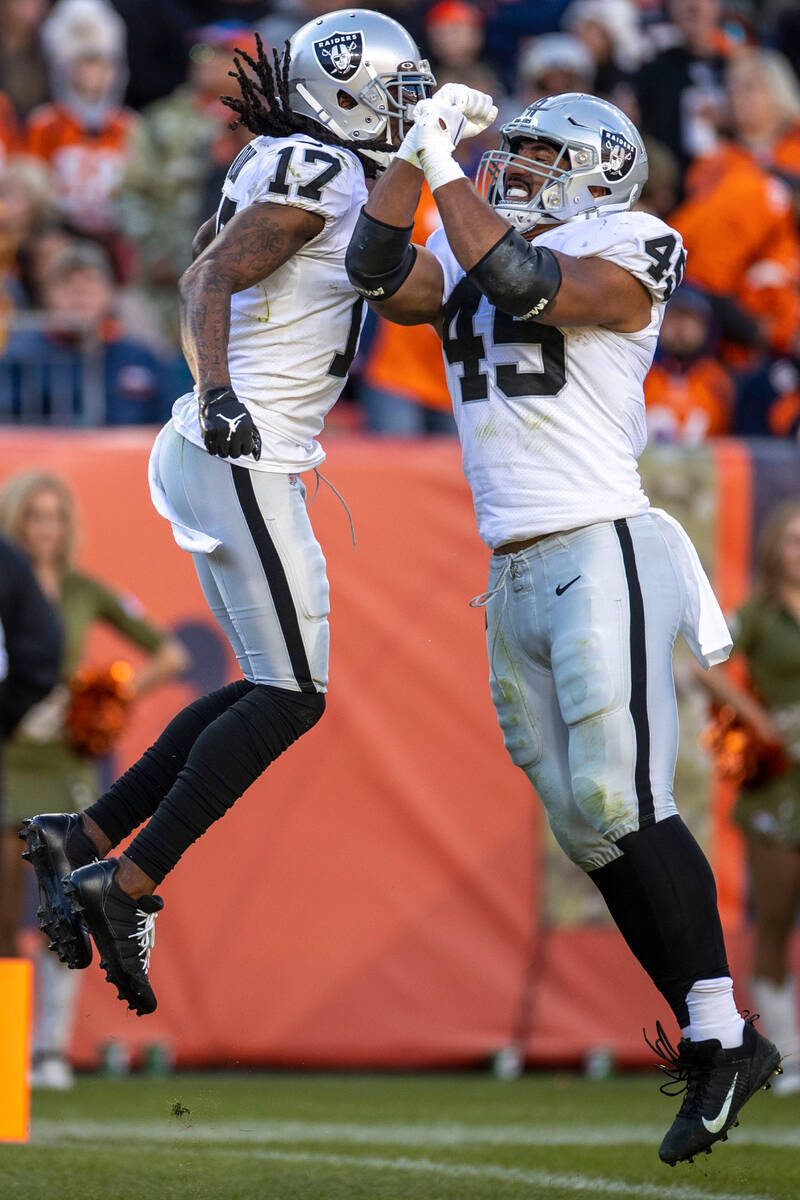 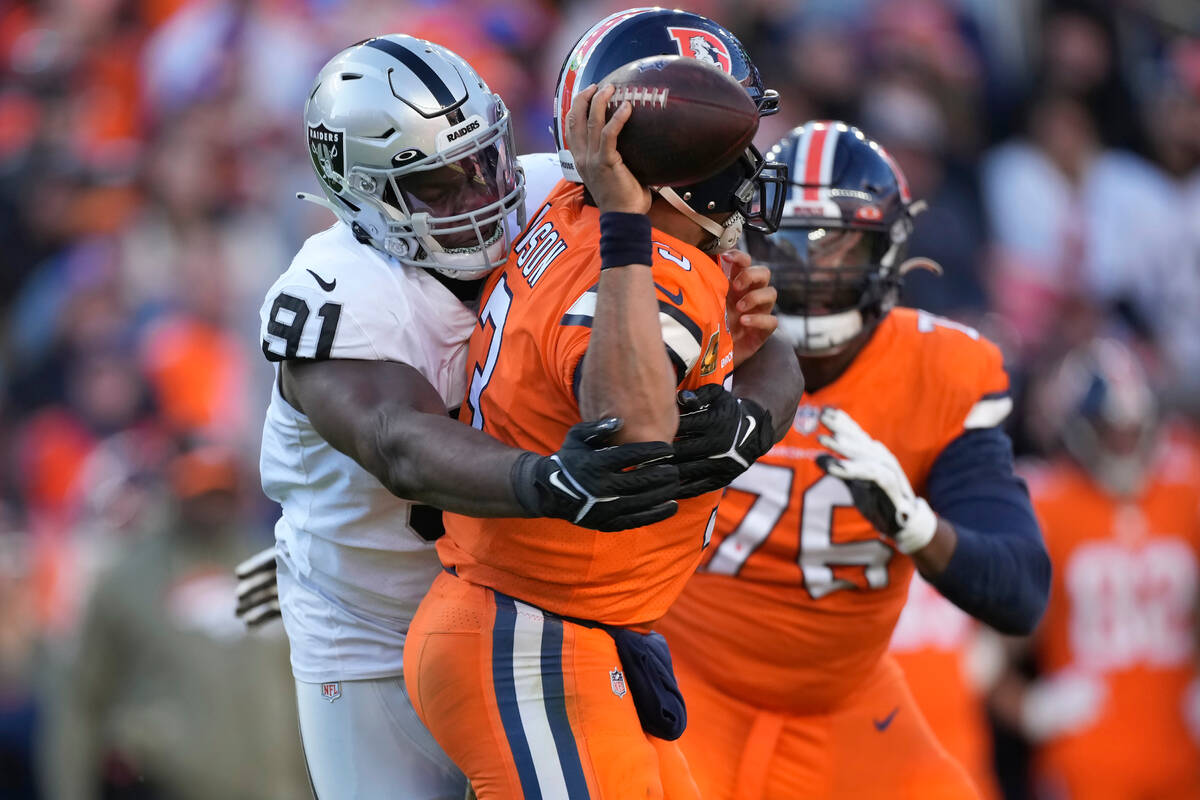 DENVER — Three takeaways from the Raiders’ 22-16 overtime victory over the Broncos on Sunday at Empower Field at Mile High:

The Raiders (3-7) snapped a three-game losing streak and finally won a close game.

Derek Carr found a wide-open Davante Adams for a 35-yard touchdown on the first drive of overtime, one play after a 33-yard catch by Foster Moreau moved the Raiders down the field.

In all but one of the Raiders’ seven losses, they had the ball with a chance to tie or take the lead with time running out.

They finally came through with a clutch drive, going 78 yards for a game-tying field-goal drive in the final seconds before the big strikes in overtime.

The Raiders have won six straight over the Broncos.

Josh Jacobs, who rushed for 110 yards, came up with a pivotal 43-yard reception to set up the tying field goal in regulation.

The Raiders are 1-6 in one-score games.

Crosby had nine of the team’s 12 sacks this season until Tyler Hall, elevated from the practice squad Saturday, recorded the Raiders’ 13th sack of the season in the fourth quarter.

Crosby contributed in other ways Sunday, too.

He forced a fumble late in the second quarter that forced the Broncos to try a short field goal just before halftime, which he blocked at the line of scrimmage.

Crosby also blocked two kicks against the Broncos in Week 17 of the 2020 season, which were the last two blocks for the Raiders in any game.

He is the first Raiders player with a sack, forced fumble and blocked field goal in the same game since 2000 and became the third player in franchise history with at least 30 sacks and 200 tackles in their first four seasons.

Raiders place-kicker Daniel Carlson was wide right on a 46-yard field goal attempt in the second quarter, ending his streak of consecutive field goals made at 41.

Carlson was three short of the NFL record held by Adam Vinatieri, whose run stretched over the 2015 and 2016 seasons.

Carlson’s last miss before Sunday came in a loss to the Giants last November.

He certainly didn’t let the miss bother him.

In the third quarter, Carlson bounced back with a 52-yard field goal that tied the game, then tied the score again with a 57-yarder with 7:06 to play. The second one was a career long.

Carlson then tied the game in the closing seconds to force overtime.

He is 20-for-23 on attempts of at least 50 yards in his career, the best percentage of any kicker in NFL history with at least 20 attempts.

The Raiders turned down the opportunity to give Carlson a shot from 56 yards on the first drive of the game, instead opting for a punt from the Broncos’ 38-yard line.