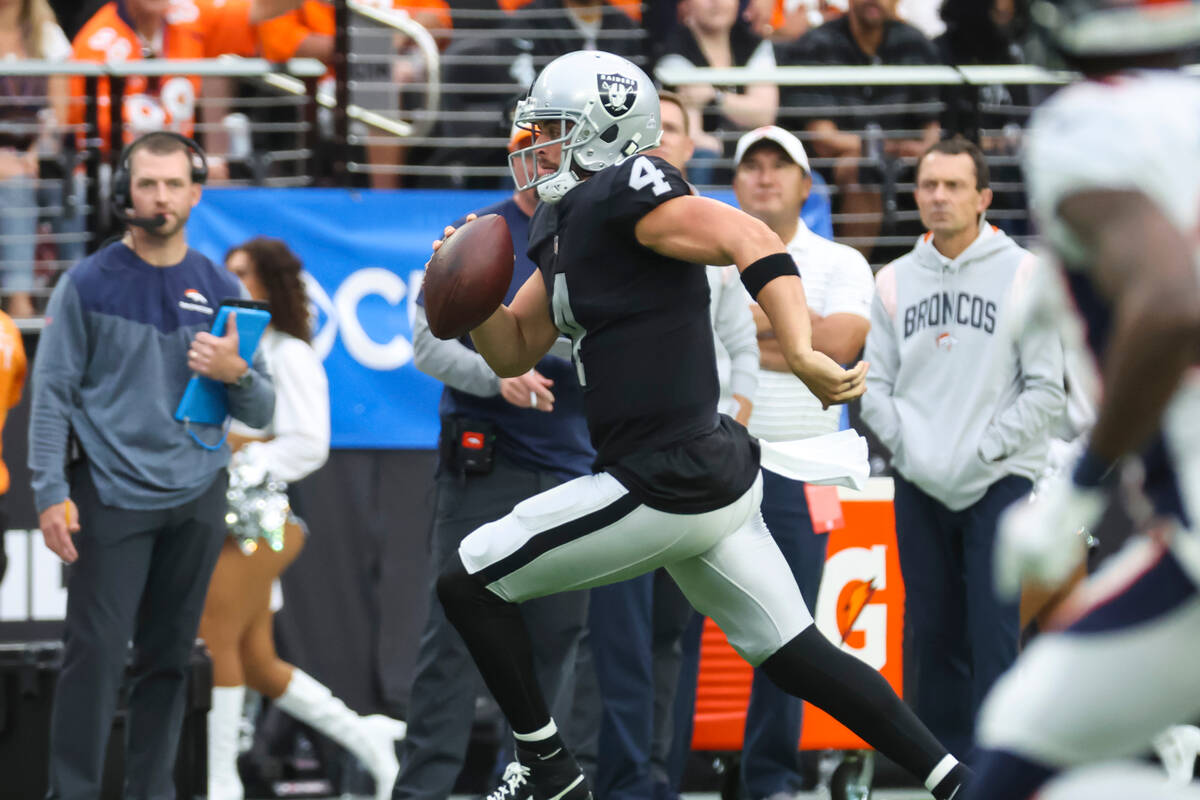 Raiders quarterback Derek Carr (4) runs the ball against the Denver Broncos during the first half of an NFL game at Allegiant Stadium on Sunday, Oct. 2, 2022, in Las Vegas. (Chase Stevens/Las Vegas Review-Journal) @csstevensphoto 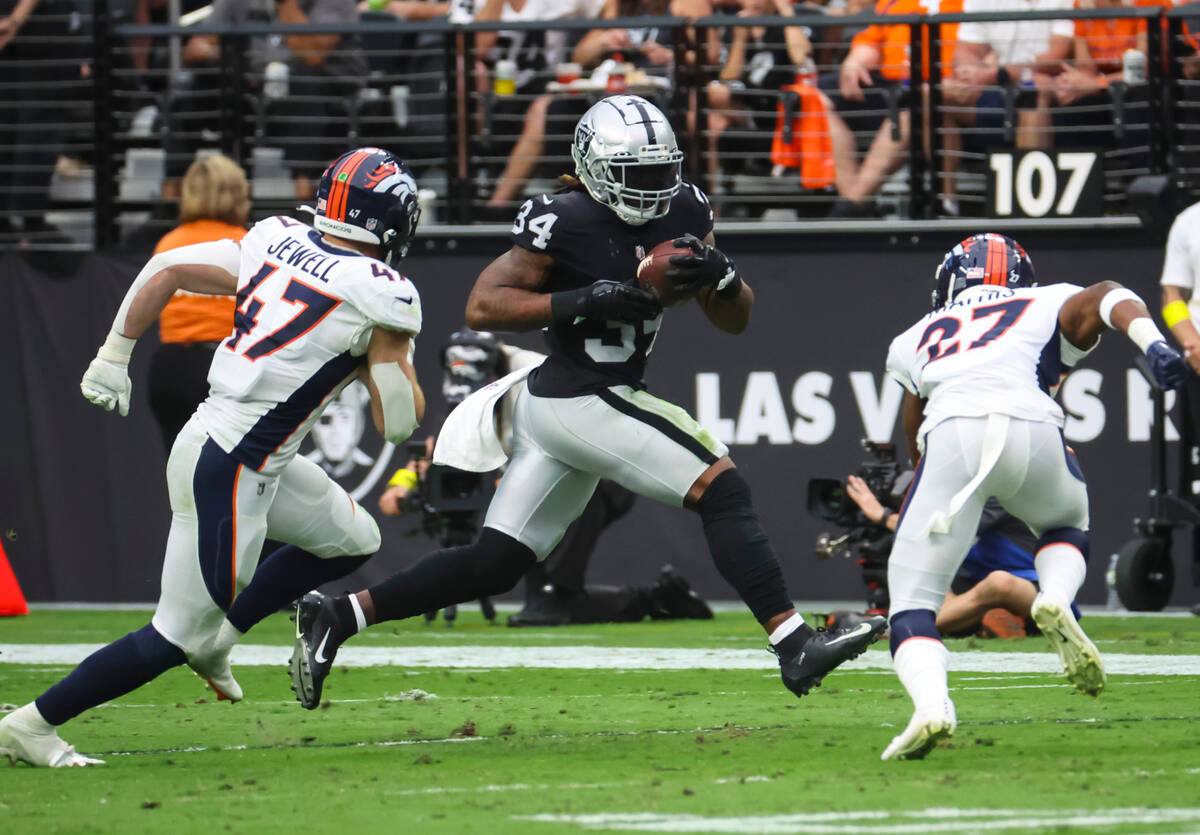 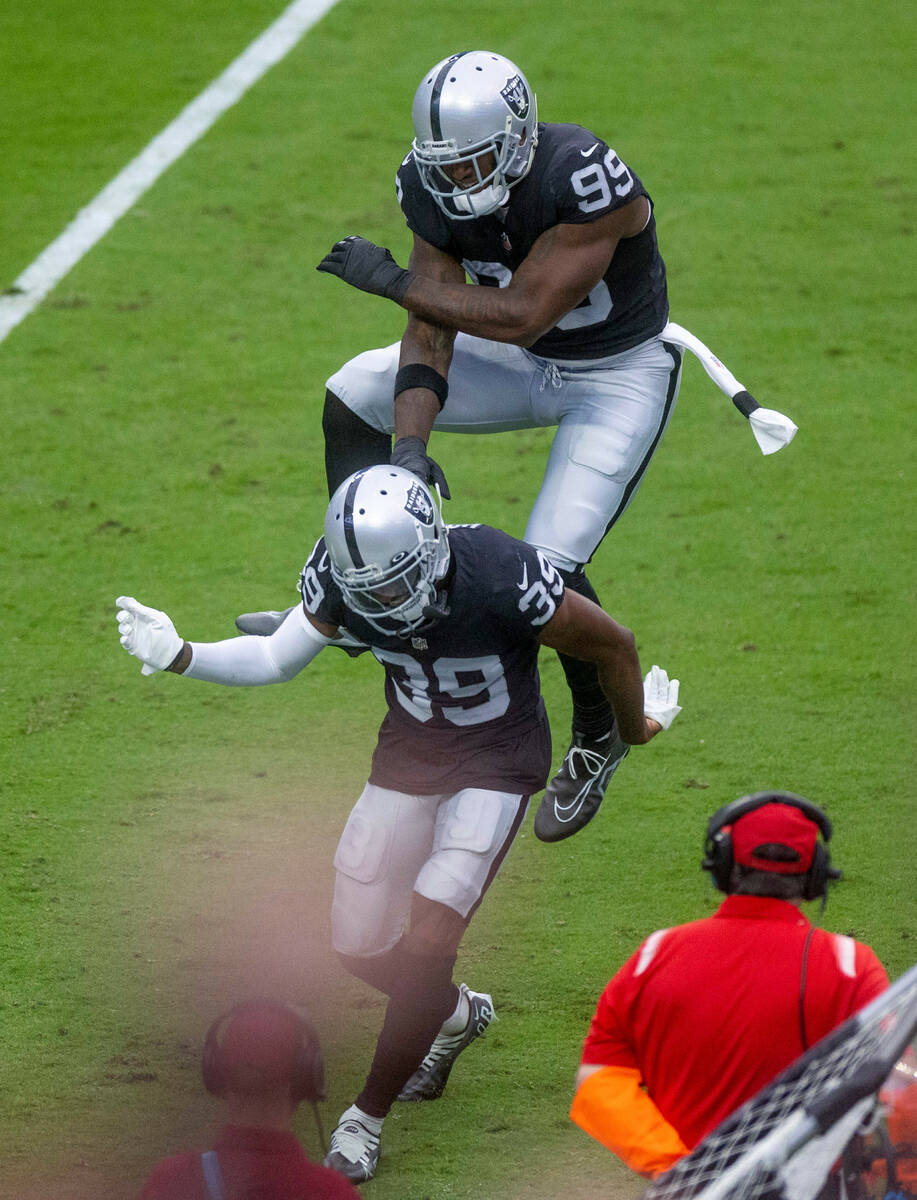 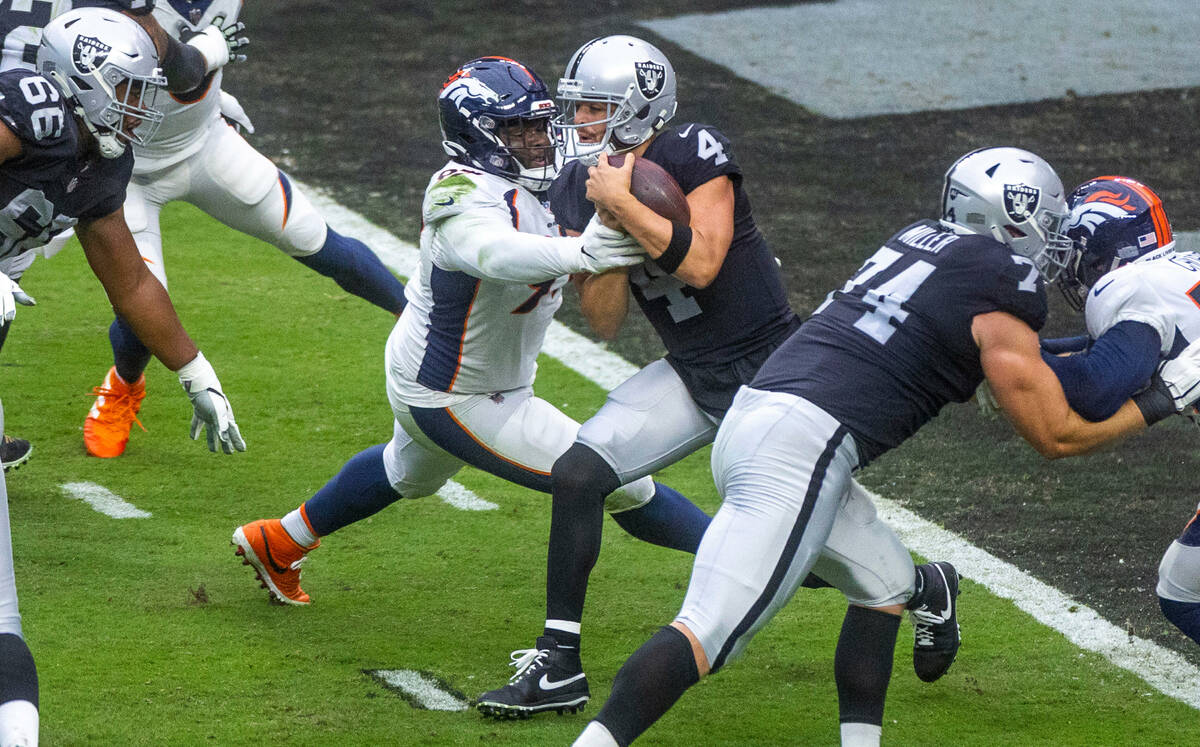 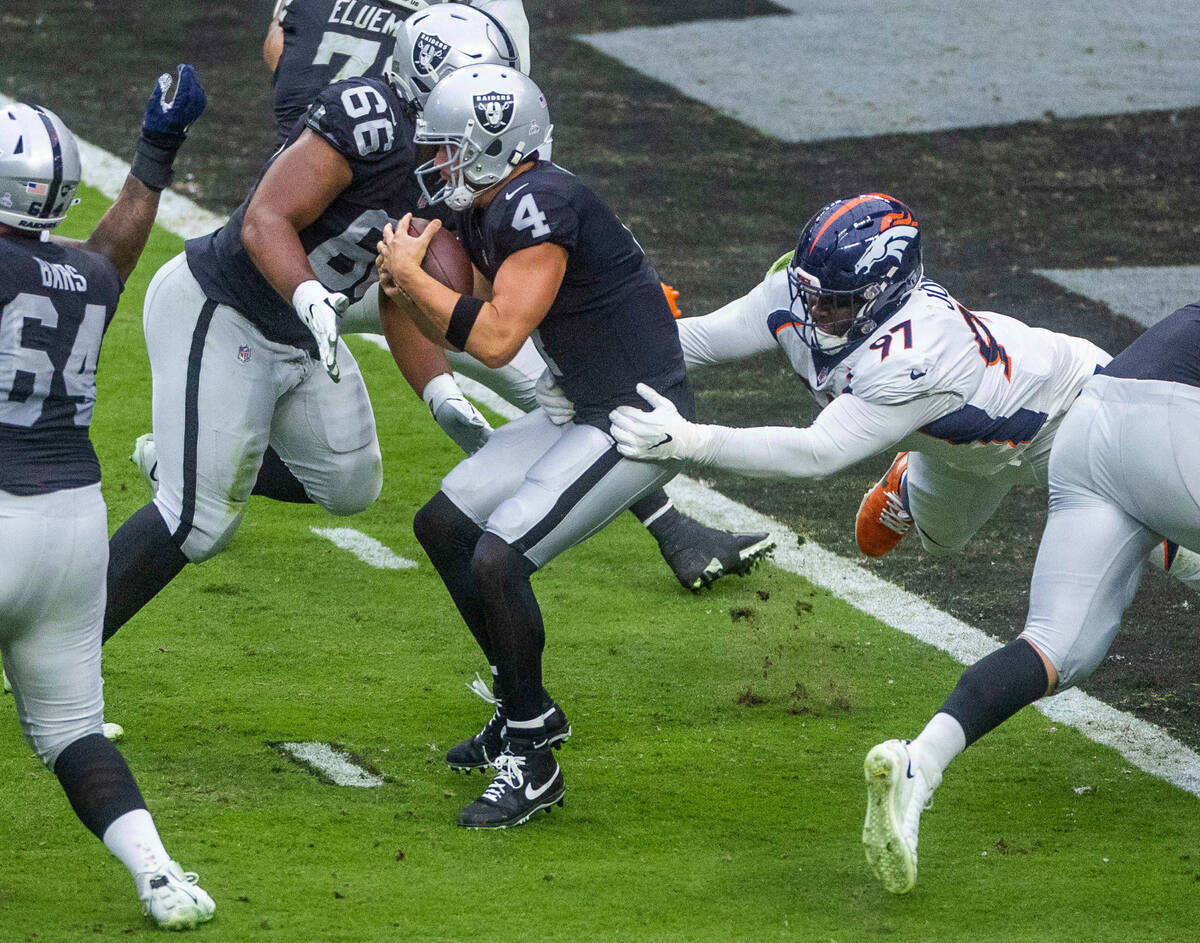 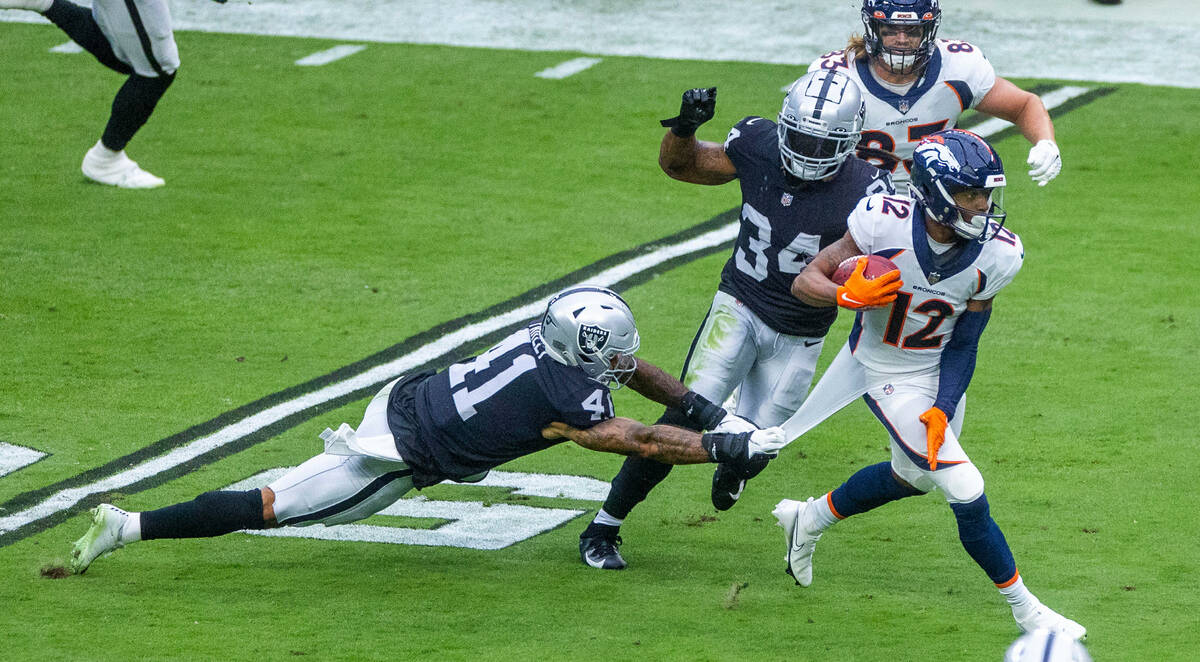 Raiders safety Matthias Farley (41) attempts to tackle Denver Broncos wide receiver Montrell Washington (12) by his t-shirt on a run back during the first half of their NFL game at Allegiant Stadium on Sunday, Oct. 2, 2022, in Las Vegas. (L.E. Baskow/Las Vegas Review-Journal) @Left_Eye_Images 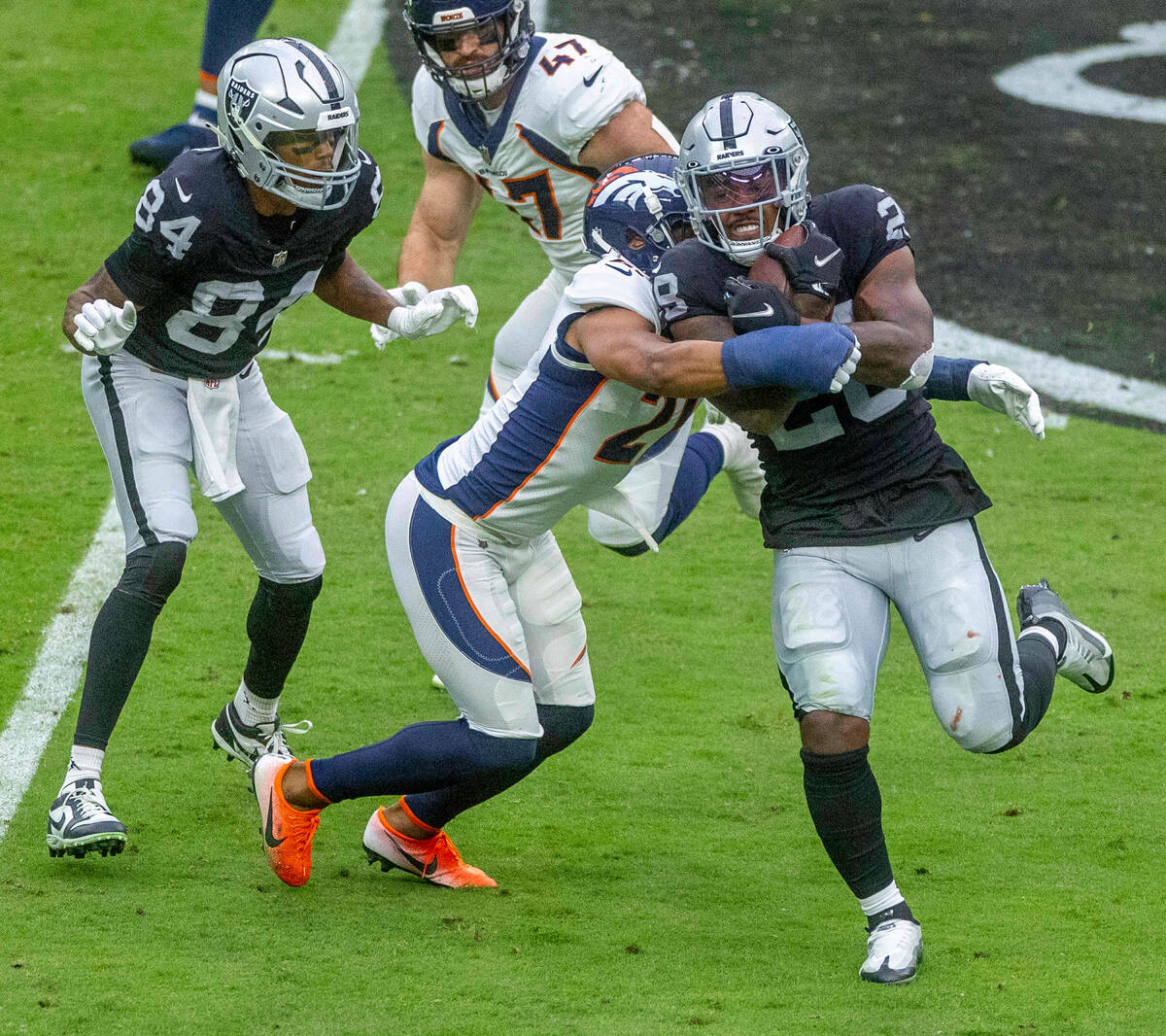 Raiders running back Josh Jacobs (28) takes on contract by Denver Broncos cornerback K'Waun Williams (21) on a run during the first half of their NFL game at Allegiant Stadium on Sunday, Oct. 2, 2022, in Las Vegas. (L.E. Baskow/Las Vegas Review-Journal) @Left_Eye_Images 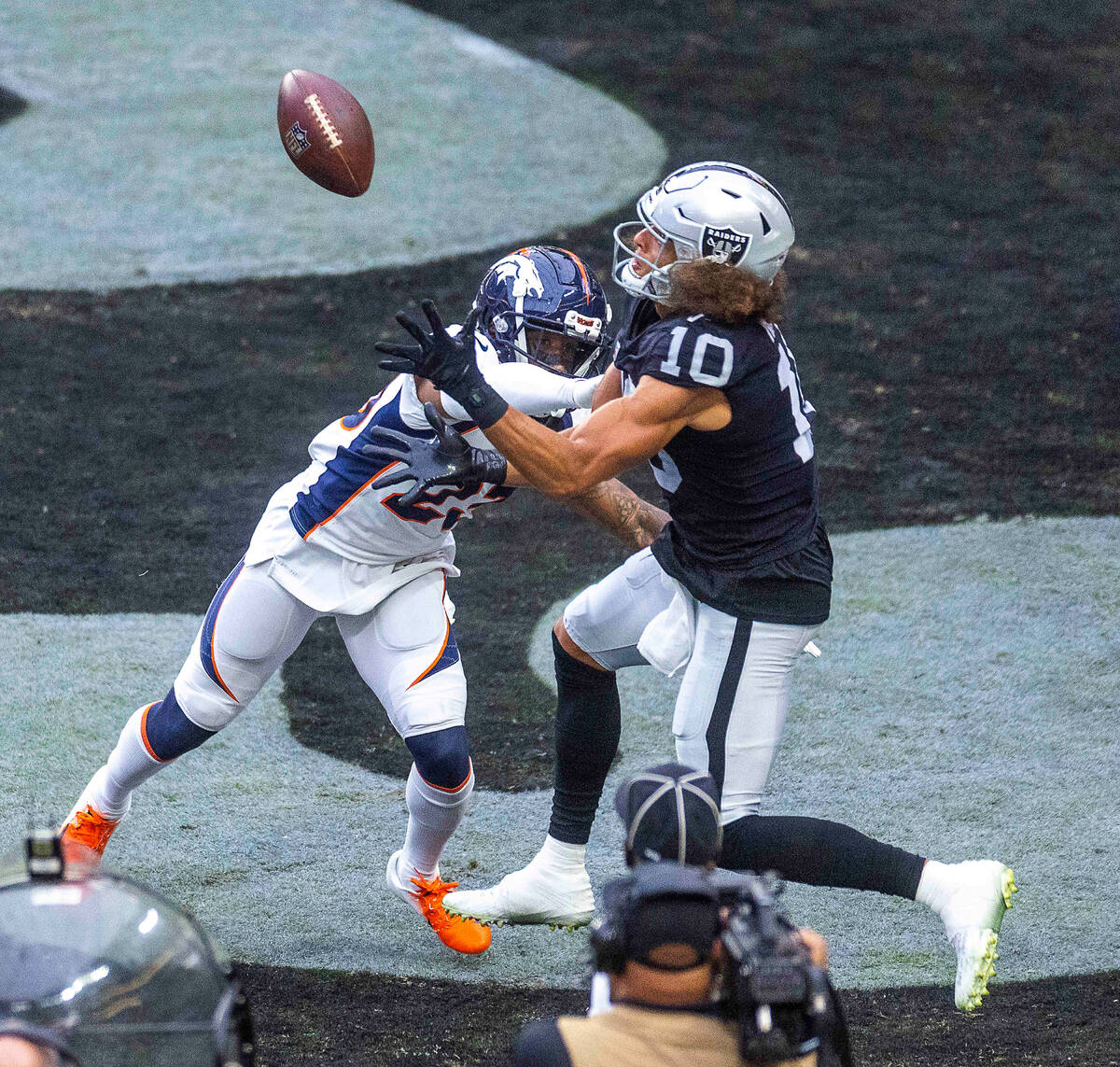 Three takeaways from the Raiders’ 32-23 win over the Broncos on Sunday at Allegiant Stadium:

The Raiders didn’t care about style points Sunday; they just needed a victory.

They got a little bit of both. All three phases made big plays as part of their first victory this season.

A team that has been unable to finish possessions or games in the first three weeks did both with a 10-play drive in the fourth quarter capped by a 7-yard touchdown run by Josh Jacobs to essentially cement the victory.

Any win would have done, but finding a way to stop the bleeding against a divisional opponent and rival made it all the more special for the Raiders (1-3).

Another divisional showdown is on deck next week on the road against the Chiefs on “Monday Night Football.”

One of the words most uttered around the team facility all week was balance.

There was a belief the Raiders were allowing opponents to take away the run game either through effective defense or putting them in disadvantageous game scripts.

Coach Josh McDaniels committed to pounding the rock Sunday, and it paid dividends.

Josh Jacobs ran for a career-high 144 yards and two scores, becoming the sixth player in franchise history to exceed the century mark 10 times in his career.

Jacobs is also tied for the seventh-most 100-yard games in the NFL since he entered the league in 2019.

Derek Carr also got in on the fun, doing damage with his legs on a field-goal drive just before halftime and picking up a key third-and-long on a scramble in the fourth quarter. He ran for five first downs on the day.

They did the damage behind the fourth different starting lineup the Raiders have deployed on the offensive line.

Andre James was back to play center after missing two games with a concussion. Alex Bars got his second start at left guard, and Dylan Parham moved to right guard after filling in for James the past two weeks.

The Raiders also deployed Justin Herron on several occasions as a tackle-eligible, serving a blocking role in the absence of injured tight end Foster Moreau.

Crosby recorded two sacks and harassed Russell Wilson all day, and Hobbs did his usual great work in coverage despite suffering a concussion in last week’s loss at Tennessee. Hobbs also had a sack on a corner blitz in the first half.

But a big blow was authored by Duron Harmon and Amik Robertson, who picked up a Melvin Gordon fumble caused by Harmon and raced 68 yards for a score.

It was the first defensive touchdown for the Raiders since Week 10 of 2019 against the Chargers. The Raiders and Lions had been the only teams with no defensive scores since the start of the 2020 season.