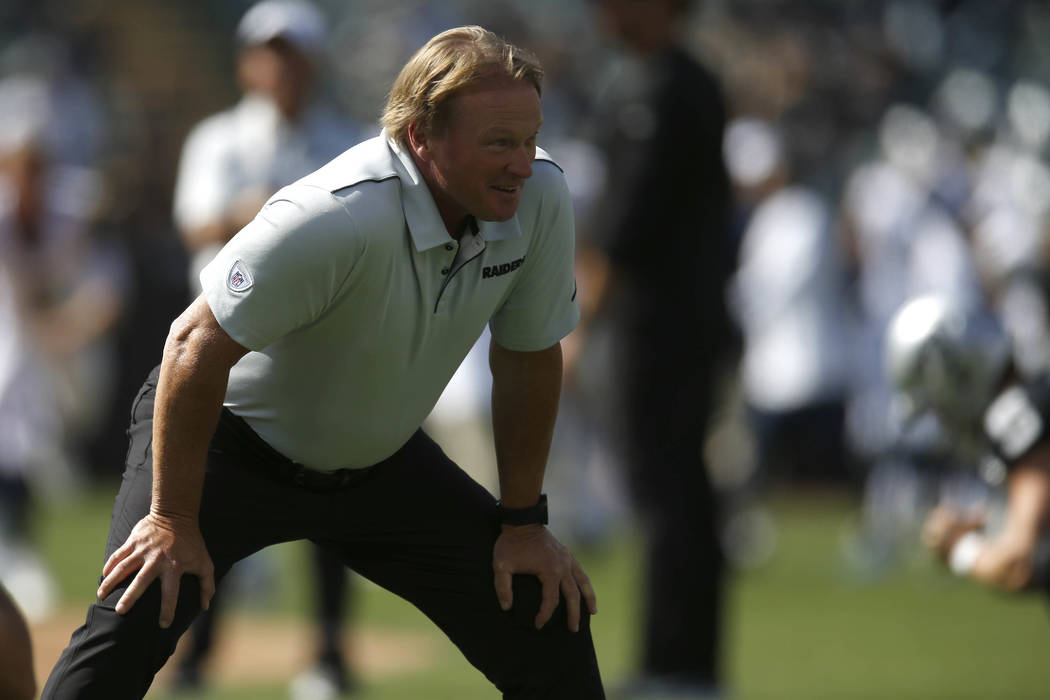 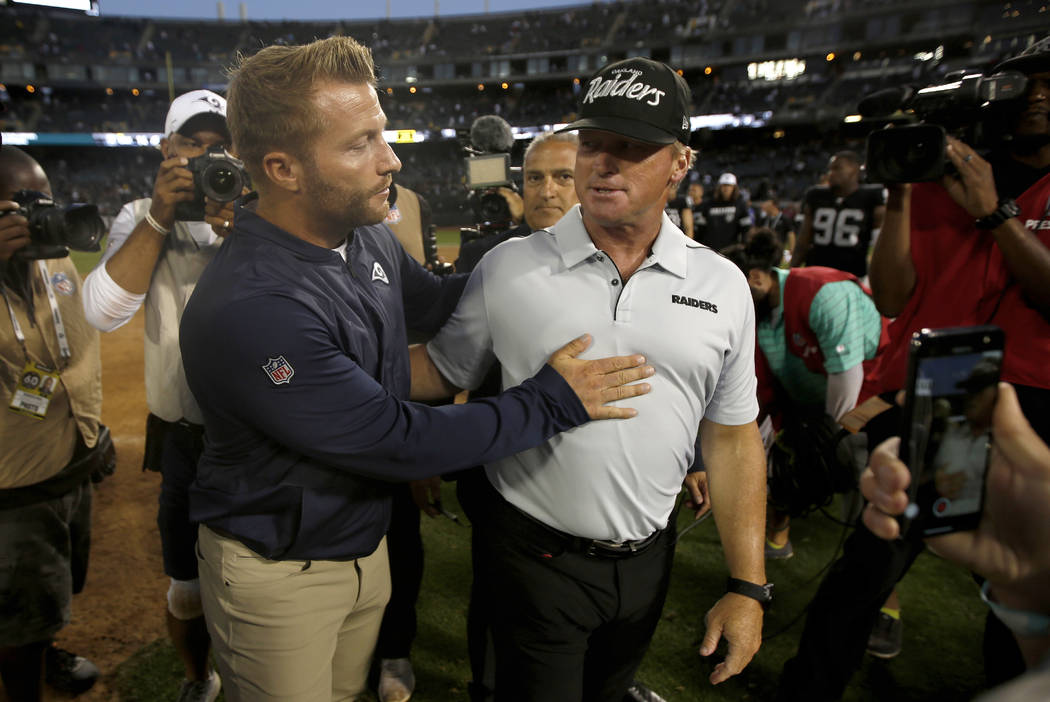 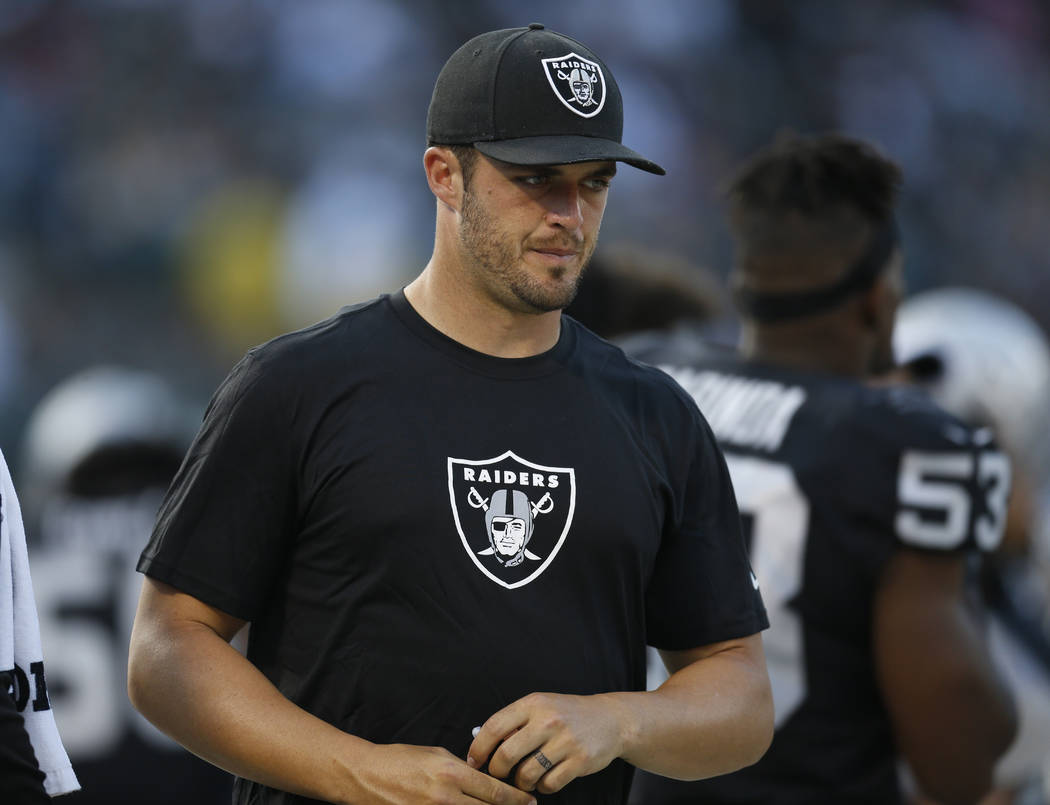 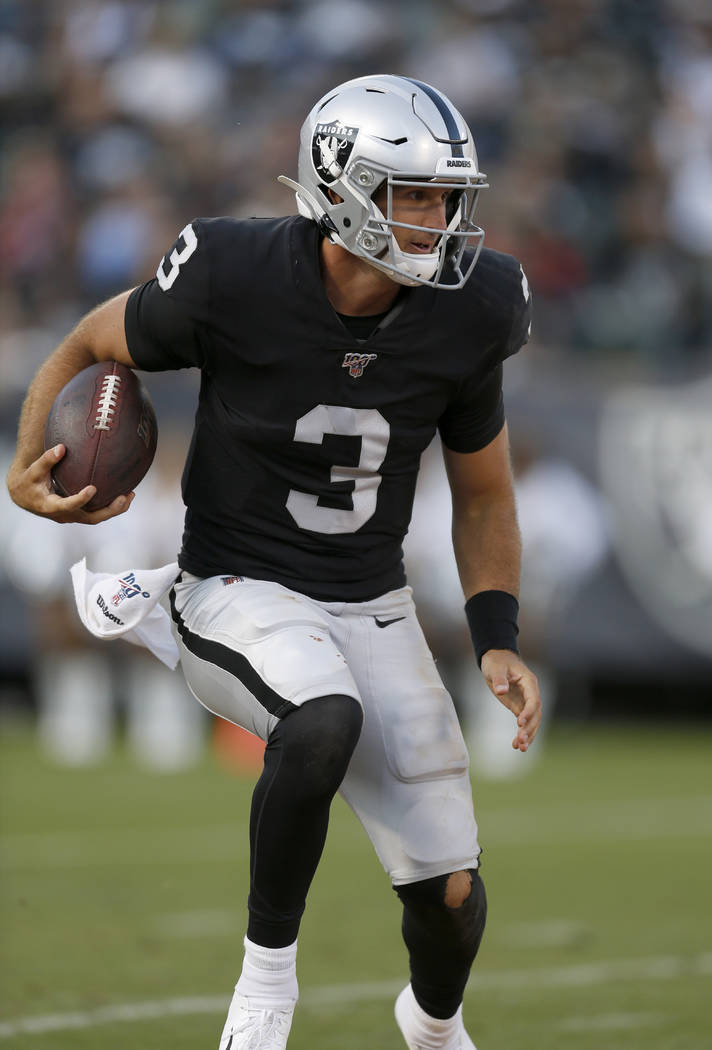 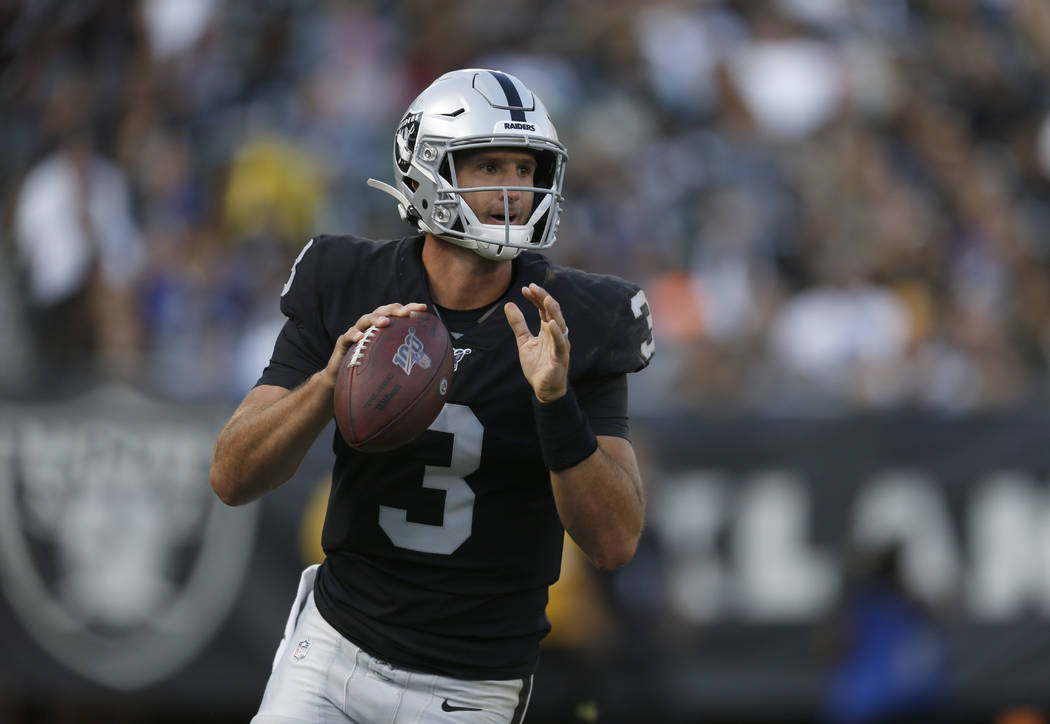 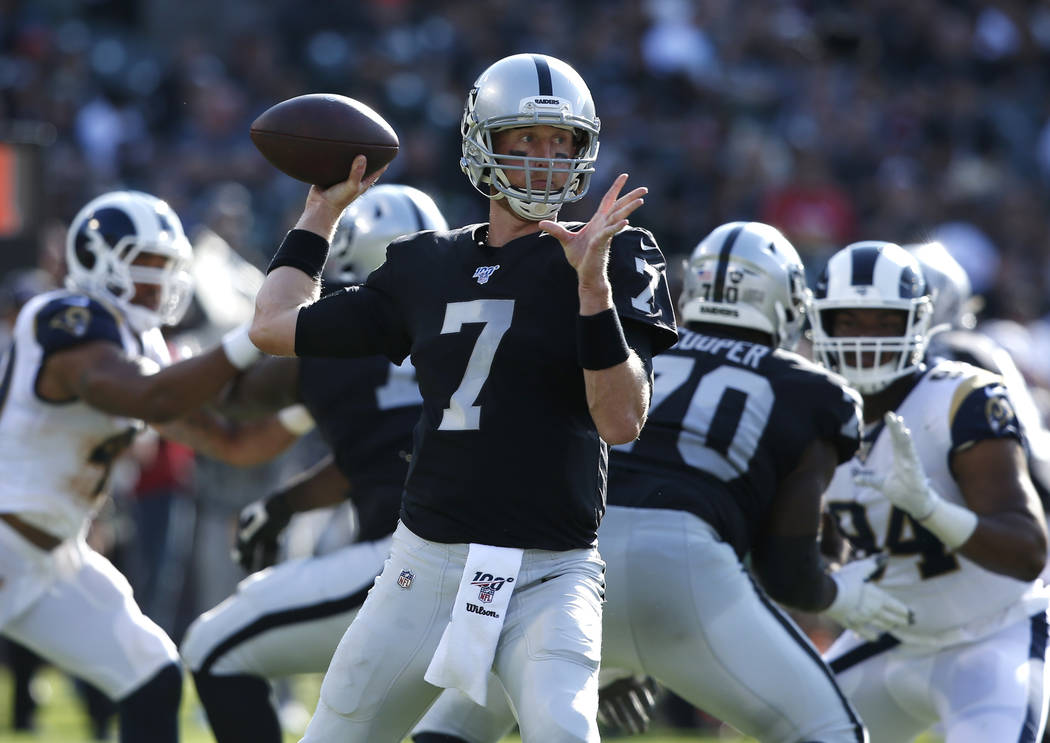 Oakland Raiders' Mike Glennon looks to pass against the Los Angeles Rams during the first half of a preseason NFL football game Saturday, Aug. 10, 2019, in Oakland, Calif. (AP Photo/Rich Pedroncelli) 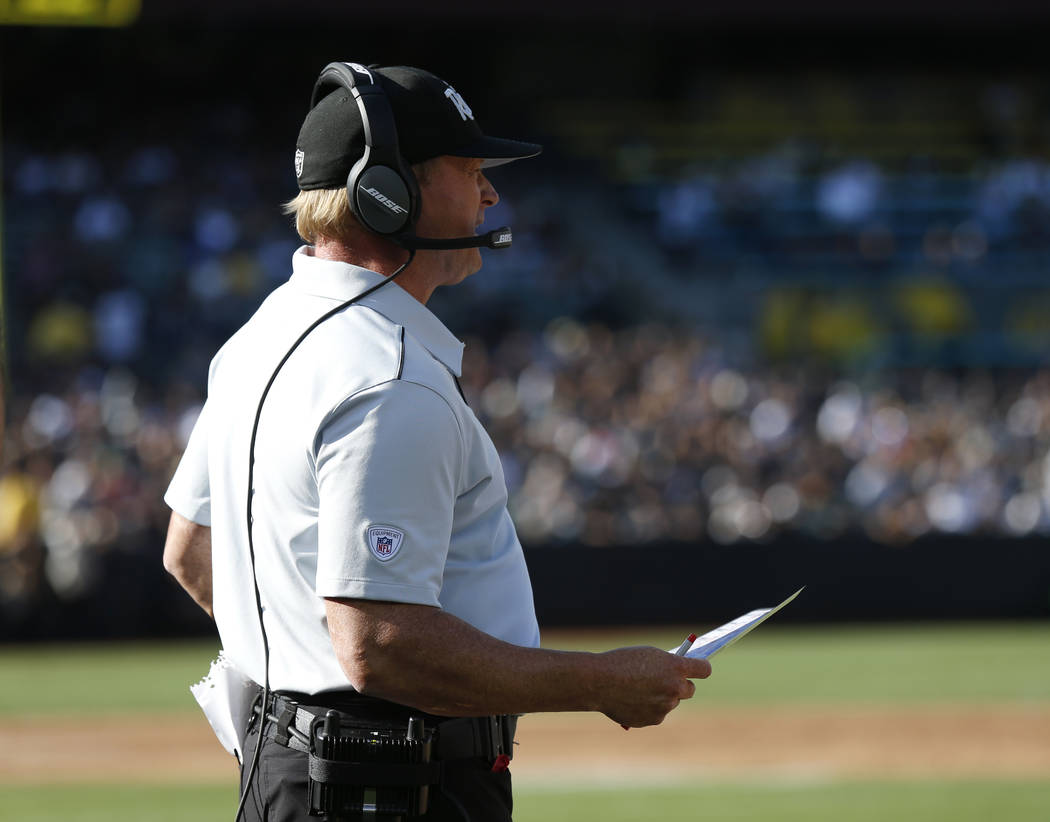 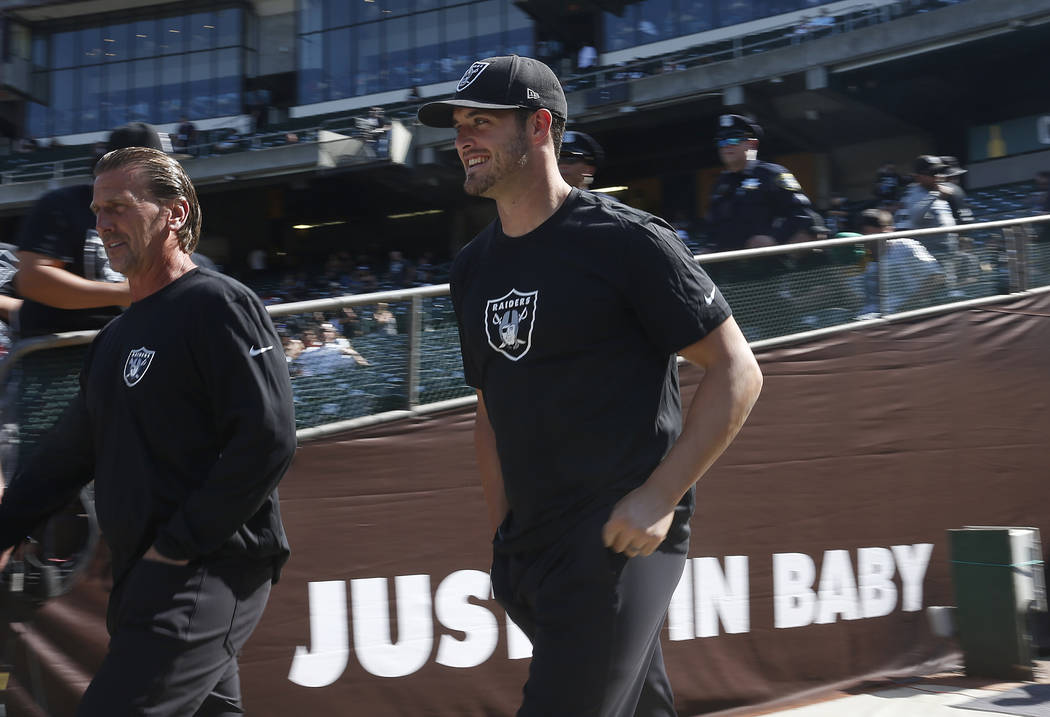 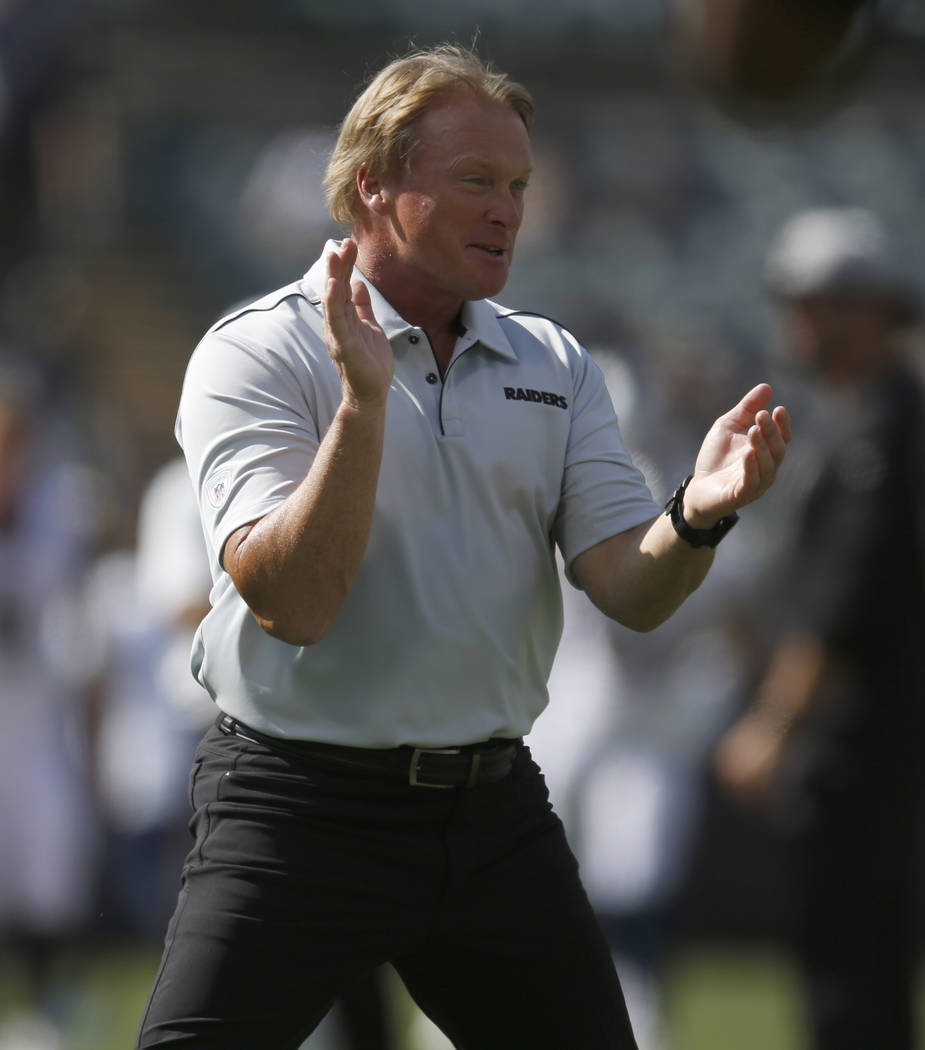 GLENDALE, Ariz. — The Raiders will hit the road for the first time this preseason when they meet the Arizona Cardinals on Thursday.

Raiders coach Jon Gruden is expected to put some of his more recognizable names on the field after about 25 regulars got the night off and watched the opening win over the Los Angeles Rams in street clothes.

Starting quarterback Derek Carr will be under center and probably get a few possessions with most of the first unit, but star receiver Antonio Brown is still sidelined.

Here are five things to watch:

1. How long will the starters go?

Regulars rarely play much in the first preseason game, but the Rams and Raiders rested almost everyone Saturday after the first units got in a lot of work against each other in two joint practices leading up to the game.

Gruden has said he wants to get his starting units some work this week. Because of the Raiders’ schedule, they might get even more action than would be typical in a second preseason game. That’s because they will play the Green Bay Packers in Winnipeg, Manitoba, next week in what usually would be considered the dress rehearsal game for NFL teams.

That could change the Raiders’ approach this week.

“We’re going to try to get a couple of the starters some work in Arizona,” Gruden said Tuesday after the team practiced at its training camp in Napa, California. “We’re still in the process of thinking things through on the Canada trip.”

2. Another chance for Carr’s backups

Mike Glennon and Nathan Peterman each got to play a full half last week, as Carr took a seat on the bench and took in the battle to be his backup.

Neither player was truly able to separate himself.

Glennon and Peterman each led the offense to a touchdown on their first drive, but neither could put points on the board on any other possession.

Peterman busted off a 50-yard run, but didn’t make any plays downfield in the passing game.

If Glennon entered the game ahead in the competition, Peterman might have closed the distance. But this competition is far from over.

3. Cut down on the errors

Gruden certainly wasn’t happy with Glennon’s turnovers, but it wasn’t the only flaw that stood out from his team’s performance last week.

The Raiders committed 11 penalties for 127 yards.

“Obviously, the interceptions and penalties have to be eliminated,” Gruden said after the game. “Too many penalties. Special teams penalties in particular really hurt us on field position.”

There is an interesting roster battle shaping up on the defensive line, particularly on the interior.

While several tackles are unavailable due to injury, others have seized the opportunity and are making a push to make the team.

Anthony Rush, a free agent from Alabama-Birmingham, is certainly a name that has stood out.

The rookie, signed by the club this month, stood out in the preseason opener. His work jumped off the film even more, drawing rave reviews from scouts around the league.

“Anthony Rush is a 340-pound guy that really took advantage of his snaps,” Gruden said. “He’s only been here eight or nine days, but he caused some tackles for loss, made a couple plays and pushed the pocket pretty good. We like him, and we’re going to try to keep working him into great shape.”

Brown’s absence has been a major storyline, but it also has quietly given the rest of the receiving corps more opportunities.

The Raiders almost certainly can’t keep them all. With Brown, Tyrell Williams and Hunter Renfrow looking like the starters and Dwayne Harris probably getting a roster spot because of his special teams abilities, the depth chart is filling up.

Marcell Ateman isn’t far behind, and the Raiders probably will keep six at the position.