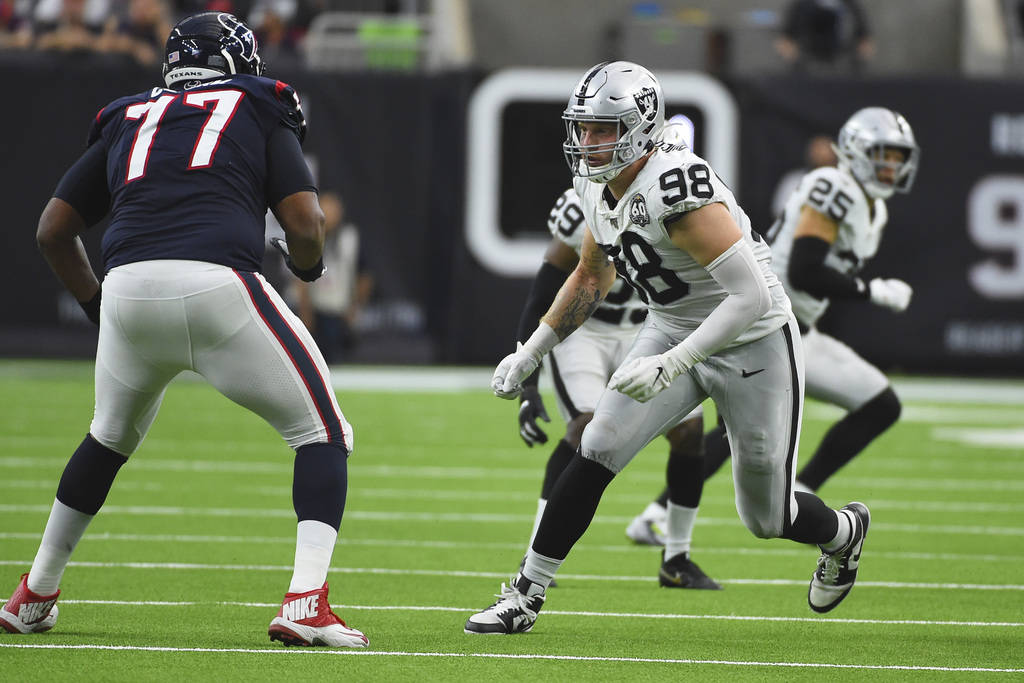 By not investing any draft capital in their defensive line last week, the Raiders sent a strong message that they feel good about that unit. Last season those players accounted for 32 sacks and have been strengthened by the addition of a new starter and two depth players during free agency.

The Raiders’ comfort level is largely the result of the highly productive rookie season of defensive end Maxx Crosby, a fourth-round pick in 2019 who defied his draft status to register a team-high 10 sacks.

In some ways Crosby overshadowed fellow defensive end Clelin Ferrell, who was drafted fourth overall in 2018 but did not perform to that level, recording only 4½ sacks. Still, the Raiders said all along that they envisioned Ferrell as a three-down edge-setting defensive end rather than a set-and-fire pass rush specialist. In doing so, they advised against judging him strictly on his sack totals.

The goal, they insist, is building a multi-dimensional defensive lineman capable of fulfilling his obligations in their 4-3 defensive scheme. And they believe Ferrell is on track to being the player they imagined upon investing such a high pick on him.

To his credit, Ferrell promised to work hard in the offseason to put himself in position to take a huge step forward in his second season.

If that mission is accomplished, the Raiders could have a young, dynamic defensive end tandem in place. The pair combined for 46 quarterback pressures last season and should be in line to produce more in 2020. But it’s on Crosby and Ferrell to ensure that is the case.

The coaching change wasn’t so much a reflection of Buckner as it was an appreciation for Marinelli, who has a way of nurturing young defensive linemen.

Given the draft capital invested in Ferrell and the upside in Crosby, it made sense to add a coach with a proven track record of getting the most out of his players. Whatever the ceilings are for Ferrell and Crosby, you figure they’ll get there with Marinelli as their coach.

To supplement their young cornerstones, the Raiders added 27-year-old defensive end Carl Nassib, who has 15½ sacks, 65 tackles, 29 tackles for loss and 33 quarterback hits over his last 45 games. Nassib will add experience and production in relief of both Ferrell and Crosby. Nassib may also play alongside Ferrell in known passing situations, with Ferrell sliding inside to create a pass rush advantage across the entire line.

Nassib could also serve as a motivating force for Arden Key, who has yet to live up to his potential in his first two seasons

Key missed eight games last year with a broken foot, and there is still time for him to be a dependable role player. But with Nassib on board, Key will have to fight for a role. The competition could benefit him, if he handles it the right way.

The Raiders also added interior lineman Maliek Collins, who played under Marinelli with the Dallas Cowboys. Collins has produced 14½ sacks, 84 tackles, 20 tackles for loss and 40 quarterback hits over his 55-game career. His ability to create interior pass rush pressure and occupy blockers will benefit his linemates by creating more favorable one-on-one matchups.

Collins’ arrival also means a competition for the job next to him. Johnathan Hankins, P.J. Hall and Maurice Hurst all have starting experience. The Raiders also added Daniel Ross, who played for Marinelli in Dallas, for depth.