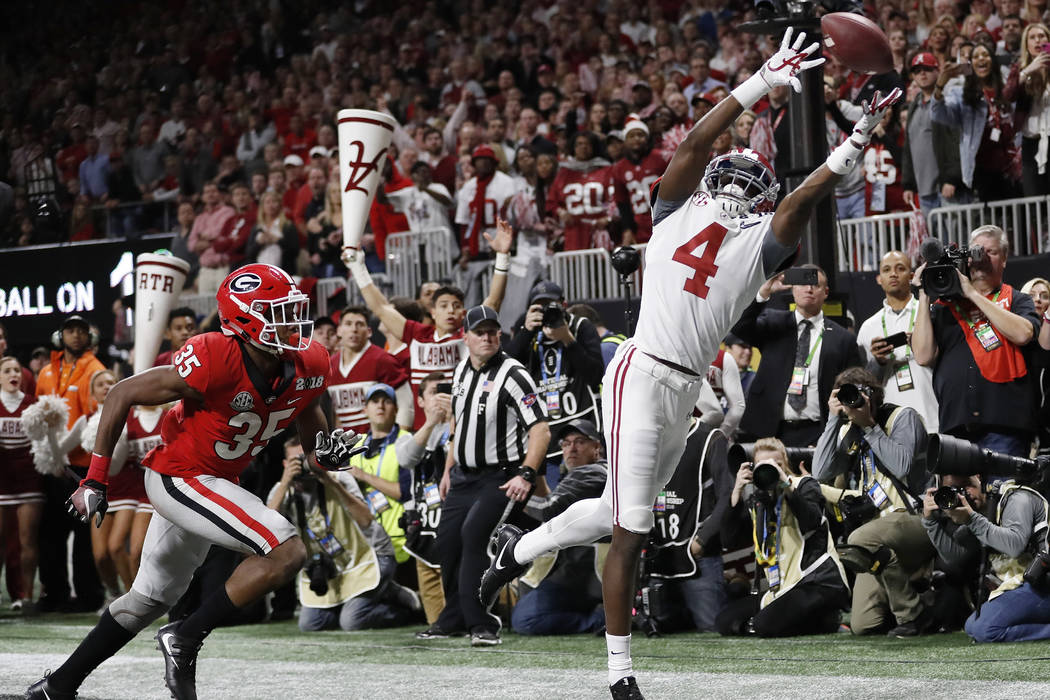 Alabama's Jerry Jeudy can't catch a pass in the end zone during the second half of the NCAA college football playoff championship game against Georgia Monday, Jan. 8, 2018, in Atlanta. (AP Photo/David Goldman)

It’s officially the offseason for the Raiders, and all eyes are on them as they prepare for the move to Las Vegas.

With a loss to the Broncos on Sunday, the Raiders will select at No. 12 and No. 19 in the opening round of the draft.

Here’s a look at some early projections for the Raiders’ first pick:

Dan Schmelzer says: “This may seem like a bit of a reach for Henry Ruggs III, but once this guy puts on a show at the NFL Scouting Combine, his value is going to skyrocket. Ruggs is the fastest and most explosive player in college football. His speed on the outside is unrivaled and he gets to full speed in the blink of an eye. Ruggs is also an incredibly quick and elusive athlete who can be extremely slippery in the open field.

“While his game is built on speed, Ruggs is more than just a guy who can run fast. He runs crisp routes that create consistent separation, has soft hands and knows how to create after the catch. The Las Vegas Raiders need a field stretcher on the outside and Ruggs just might be the best one in the entire 2020 NFL draft class.”

Nick Klopsis says: “It’s been a while since the Raiders had a stalwart middle linebacker. Perhaps it’s time to change that. Simmons, a converted safety, is a perfect fit for today’s NFL as a “moneybacker” — that is, a safety/linebacker hybrid. At 6-foot-4, 225 pounds, he has the athleticism and sideline-to-sideline range to cover tight ends as well as the instincts and tackling ability to stop the run.”

Matt Miller says: “It’s going to take some time to get used to seeing ‘Las Vegas Raiders’ up there.

“As the team moves east, head coach Jon Gruden and general manager Mike Mayock will look to hit another home run with their second draft class together. The formula followed in 2019’s draft was to look at high performers from major colleges who brought work ethic and discipline to the league.

“If you’re looking for a wide receiver, start at Clemson. The pipeline since Dabo Swinney took over as head coach has been fantastic with Sammy Watkins, DeAndre Hopkins and Mike Williams all going as first-rounders. Tee Higgins is next.

“Higgins’ 6-4, 215-pound frame allows him to win over the top or deep down the field. His body control and athleticism will remind you of A.J. Green. That’s exactly the type of playmaker Derek Carr needs as the Raiders offense looks to take the next step.”

Vinnie Iyer says: “After the Antonio Brown debacle, the Raiders can go for their true long-term No. 1 receiver to pair with former Clemson slot receiver Hunter Renfrow. Jeudy fits the profile as a No. 1 receiver; a classic intermediate-to-deep playmaker and drive-finisher at 6-1, 198 pounds.”

Kyle Crabbs says: “The Oakland Raiders have to be tickled to find Alabama’s Jerry Jeudy still on the board here. The Raiders’ hopes for an overhauled wide receiver group went up in smoke when Antonio Brown finessed his way out of Oakland right before the start of the season. Jeudy doesn’t quite carry the same luster as he did early in the season, but it’s by no fault of his own. He is still a dynamic threat and a terrific route runner to all levels of the field. He can serve as the new alpha in Jon Gruden’s offense.”

Michael Renner says: “Simmons has lined up all over the place in his three seasons at Clemson, yet he’s still earned a 92.0 coverage grade for his career. That will fit in nicely in a Raiders defense that could use almost any position that can cover.”