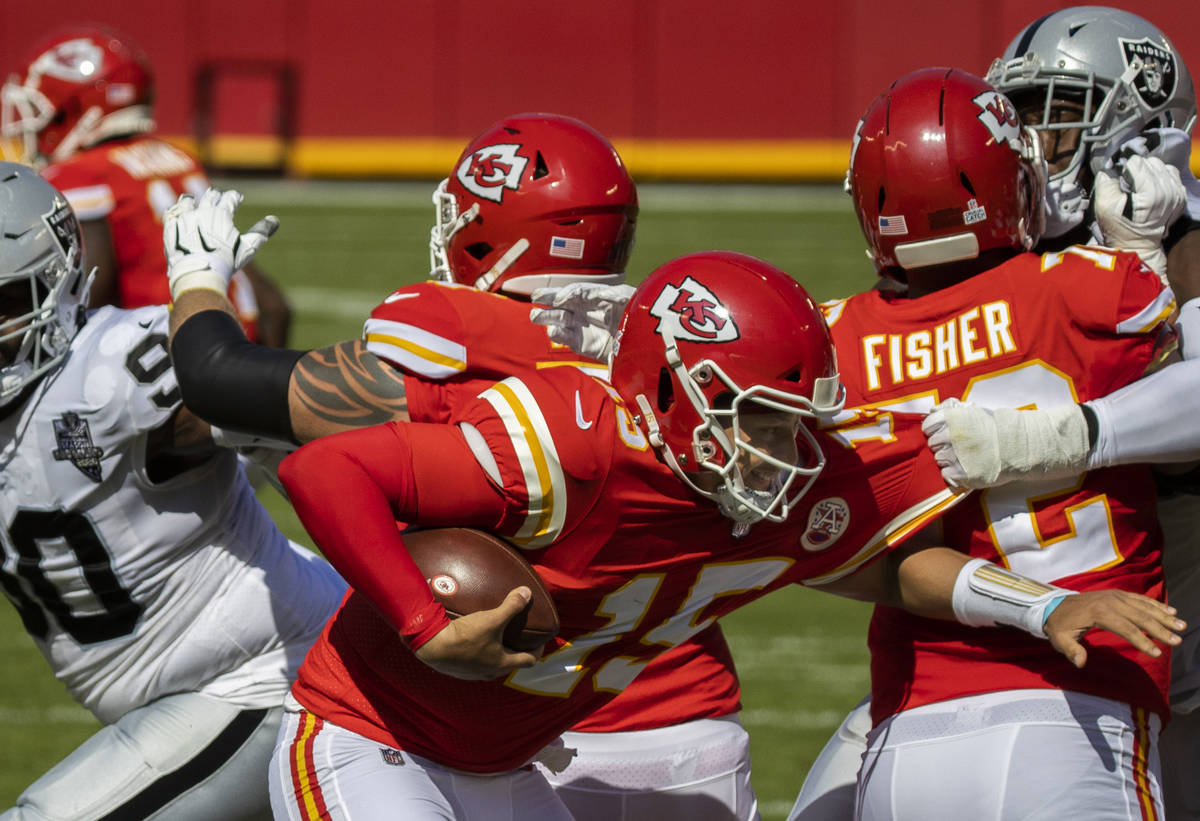 Chiefs quarterback Patrick Mahomes has had more individual success against the Raiders than any other team during his short, distinguished NFL career.

Save for that one Sunday afternoon last month at Arrowhead Stadium.

“They came out and won the football game,” Mahomes told reporters Wednesday morning, referring to the Raiders’ 40-32 upset victory. “So we’ll have to do a better job this time, know that we’re playing against a good opponent, and know that we’re going to have to give our best shot if we want to come out with a win.”

Mahomes spoke before the Raiders put seven defensive players on COVID-19 reserve list Wednesday afternoon after contact tracing revealed they had been exposed to defensive end Clelin Ferrell, who has tested positive for the virus. A ninth defender, slot cornerback Lamarcus Joyner, had been placed on the list on Tuesday. A 10th defender, linebacker Cory Littleton, was placed on the list last week.

Whether any or all of those players will be able to play on Sunday won’t be known until later in the week.

Mahomes has torched the Raiders since taking over as Kansas City’s starter, throwing 13 TDs, two interceptions and twice throwing four TDs in a game. He sports a 106.3 passer rating against the Raiders, the best against any of the Chiefs’ three AFC West opponents.

Mahomes and Kansas City will be looking to avenge their lone loss of the season Sunday night at Allegiant Stadium. A victory would strengthen the 8-1 Chiefs’ stranglehold on the AFC West and help them keep pace with the unbeaten Pittsburgh Steelers, who hold the conference’s top seed and play the Jacksonville Jaguars.

A strong outing would give Mahomes even more success versus the team against which he’s thrown the most touchdowns since 2018.

“We know that we’re going to need all of our attention there,” said Mahomes, who is third in the NFL with 25 touchdown passes and second with a 115.9 passer rating. “We don’t like losing to teams twice, so we’ll have the right mindset coming out.”

Mahomes hadn’t lost to the Raiders until Oct. 11. In that game, the Raiders pressured him on a season-high 44 percent of dropbacks and coaxed him into his one and only interception this season. He’s eager to avenge the loss, as are the Chiefs, who haven’t been swept by the Raiders since 2012.

“The intensity is going to be there,” Chiefs running back Clyde Edwards-Helaire said.

Broncos quarterback Drew Lock sustained a bruise near his ribs Sunday in a 37-12 loss to the Raiders and did not practice Wednesday ahead of a game with the Miami Dolphins. Lock was sacked twice and hit another seven times en route to a season-high four interceptions.

“He’s made good progress since Monday morning till Wednesday morning,” Denver coach Vic Fangio said. “We’ll see how much (progress) he continues to make … and see how it goes.”

On to New York

The Chargers are one of three teams this season to not lose a game by more than one score. The other two are the unbeaten Steelers and the Chiefs.

Los Angeles on Sunday plays host to the winless New York Jets, and Chargers coach Anthony Lynn said he believes the Jets will win a game at some point before the season is over

“We’ve just got to make sure it’s not this week,” the coach said.