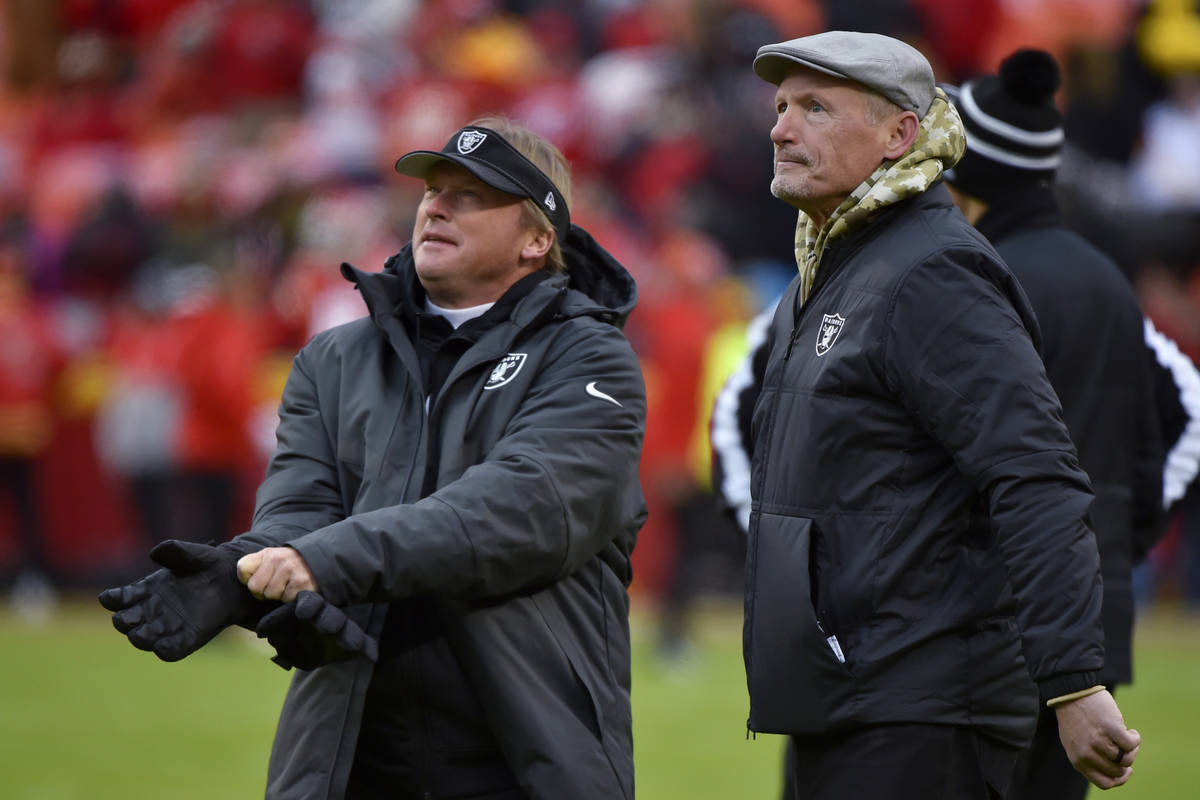 FILE - In this Dec. 1, 2019, file photo, Oakland Raiders general manager Mike Mayock stands with coach Jon Gruden before the team's NFL football game against the Kansas City Chiefs in Kansas City, Mo. Mayock's first rookie class as general manager of the Raiders was an extremely productive one. Whether this year's class can perform in similar fashion could help determine whether the Raiders can be a playoff contender in the AFC in their first season in Las Vegas. (AP Photo/Ed Zurga, File) 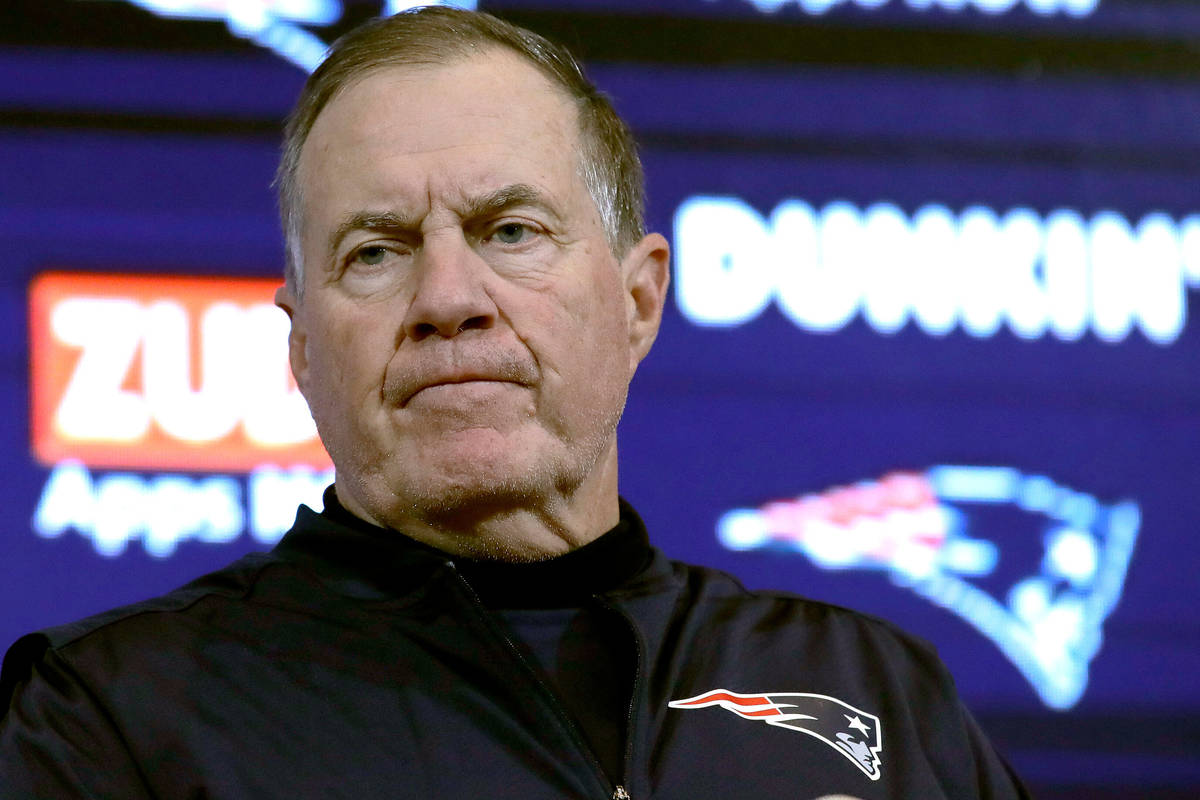 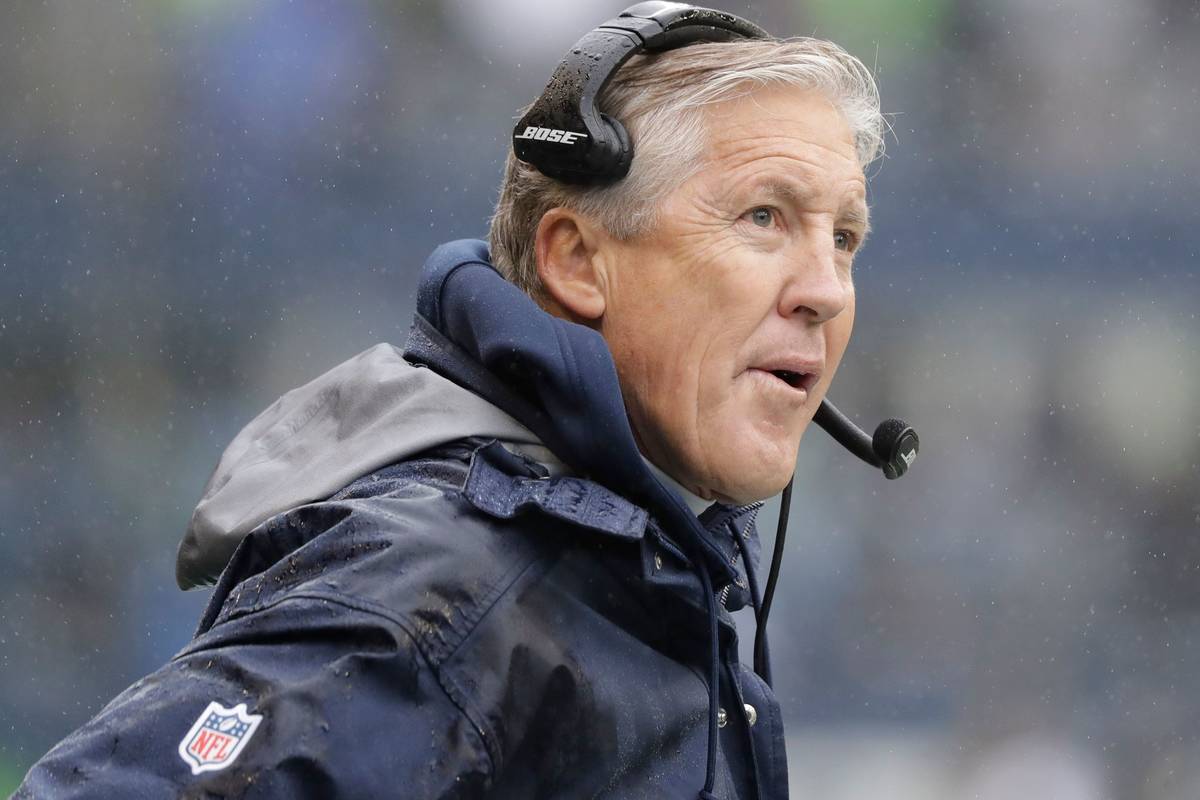 Seattle Seahawks head coach Pete Carroll watches from the sideline during the first half of an NFL football game against the Baltimore Ravens, Sunday, Oct. 20, 2019, in Seattle. (AP Photo/Elaine Thompson) 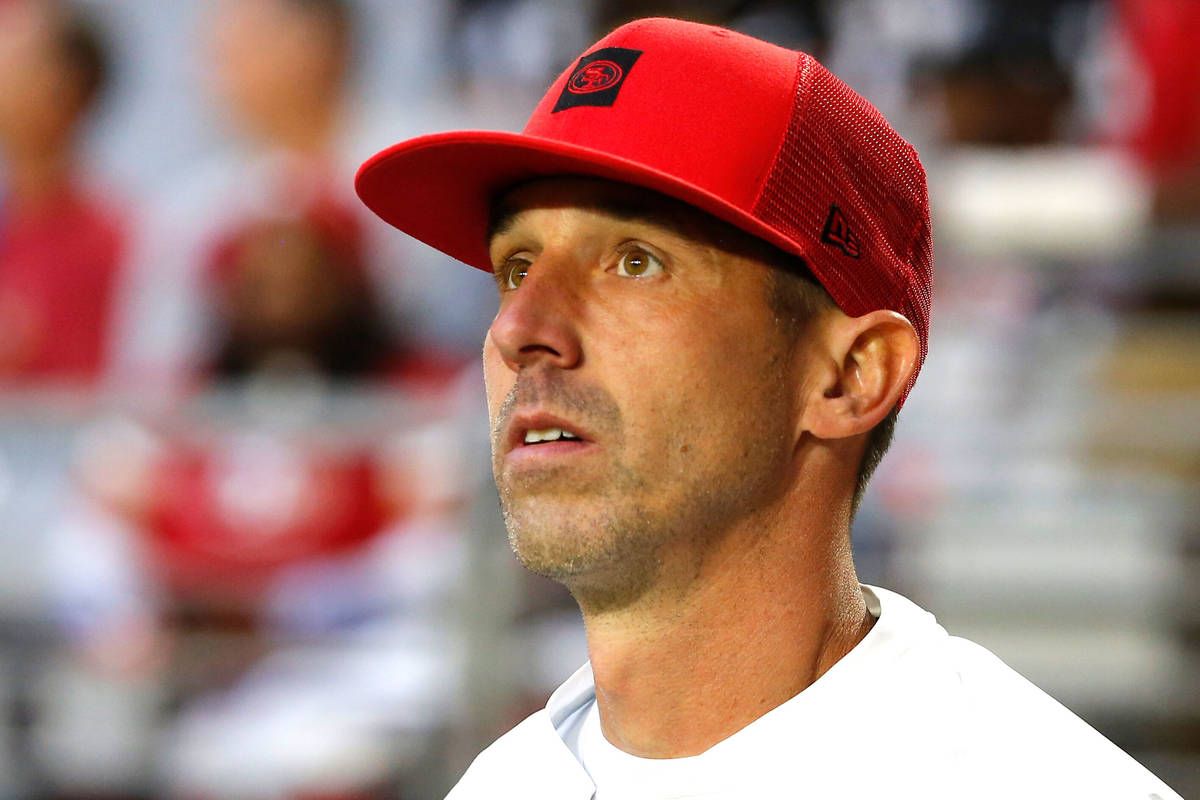 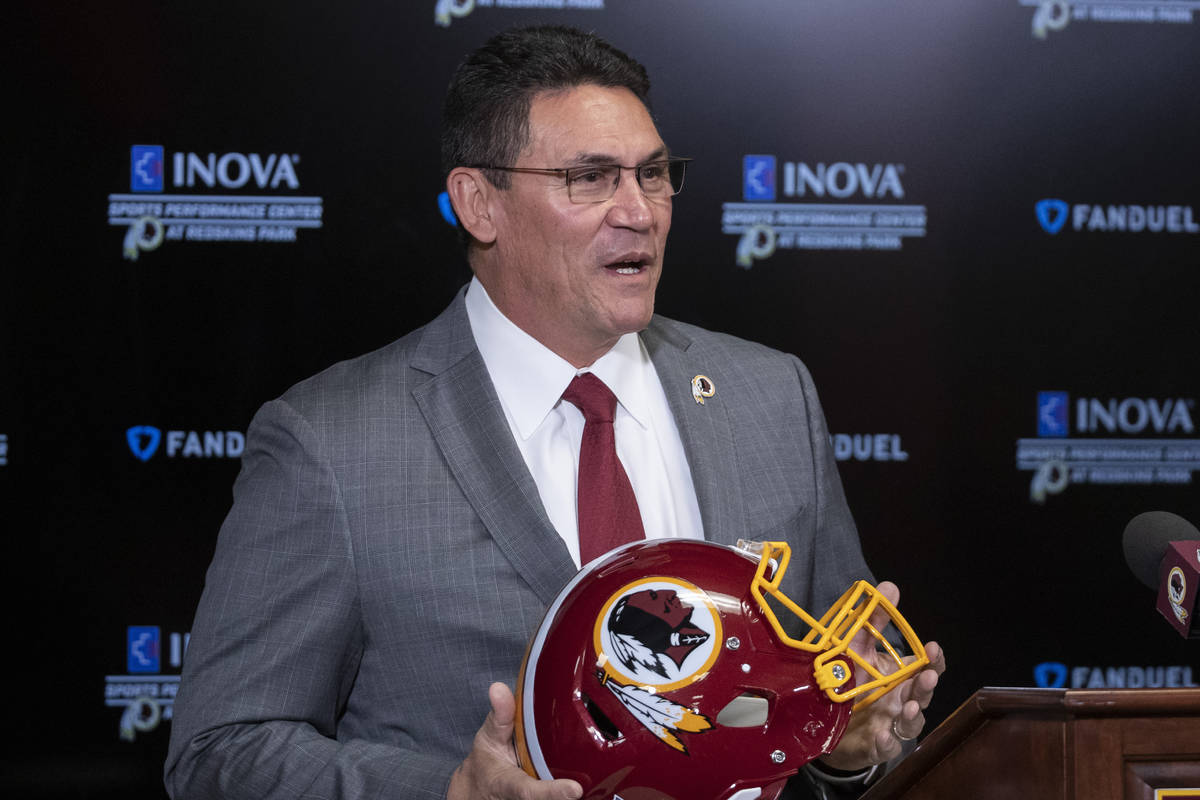 FILE - In this Jan. 2, 2020, file photo, Washington Redskins head coach Ron Rivera holds up a helmet during a news conference at the team's NFL football training facility in Ashburn, Va. A new name must still be selected for the Washington Redskins football team, one of the oldest and most storied teams in the National Football League, and it was unclear how soon that will happen. But for now, arguably the most polarizing name in North American professional sports is gone at a time of reckoning over racial injustice, iconography and racism in the U.S. (AP Photo/Alex Brandon, File) 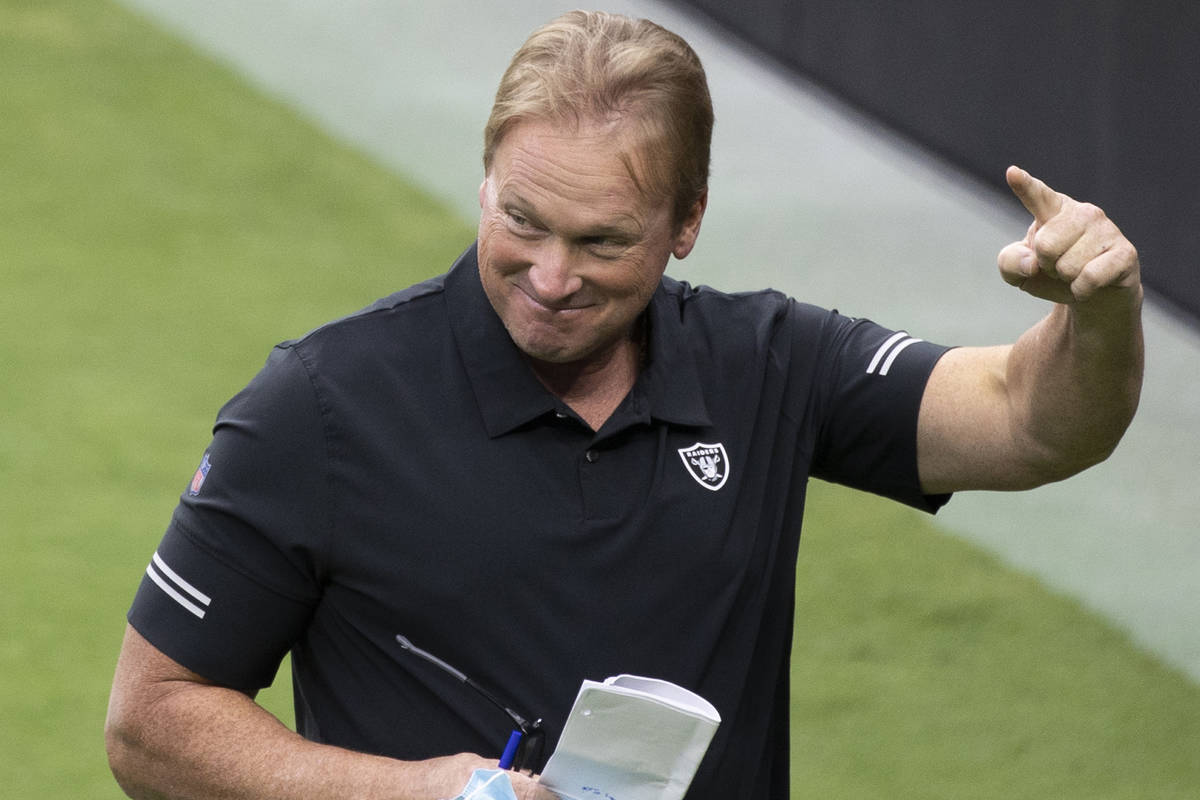 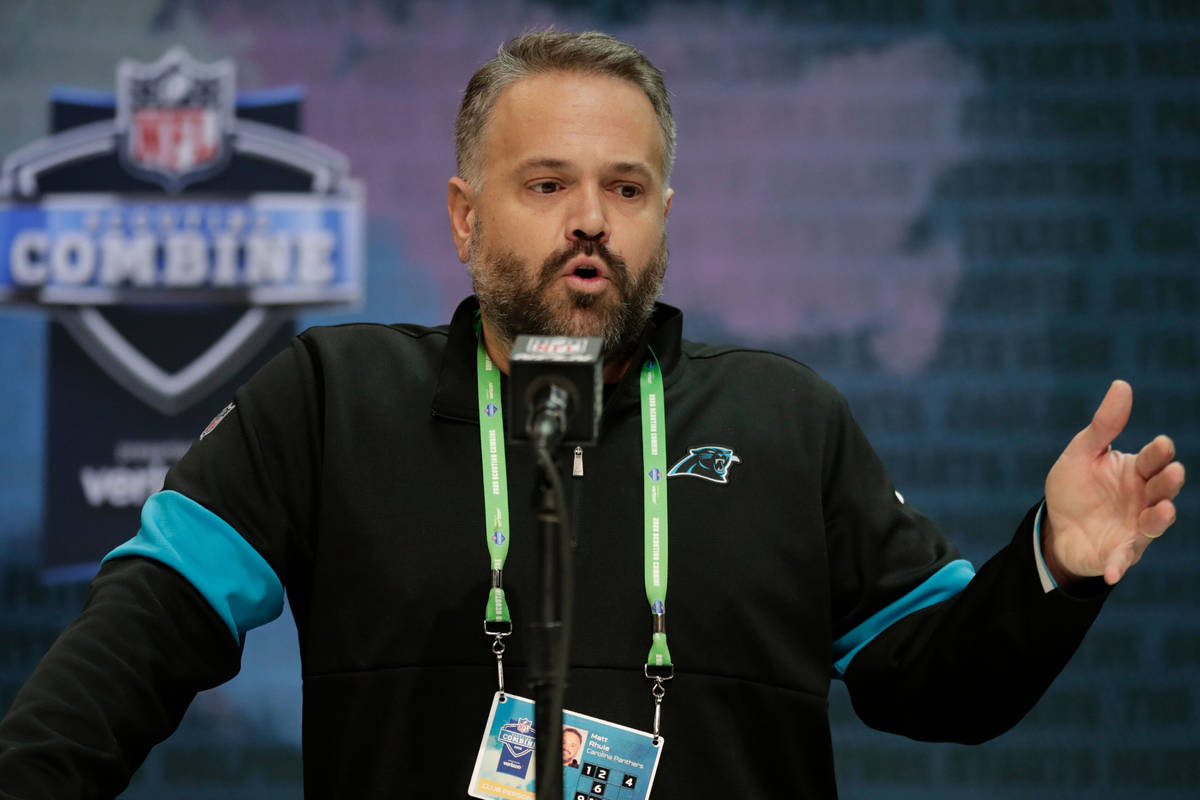 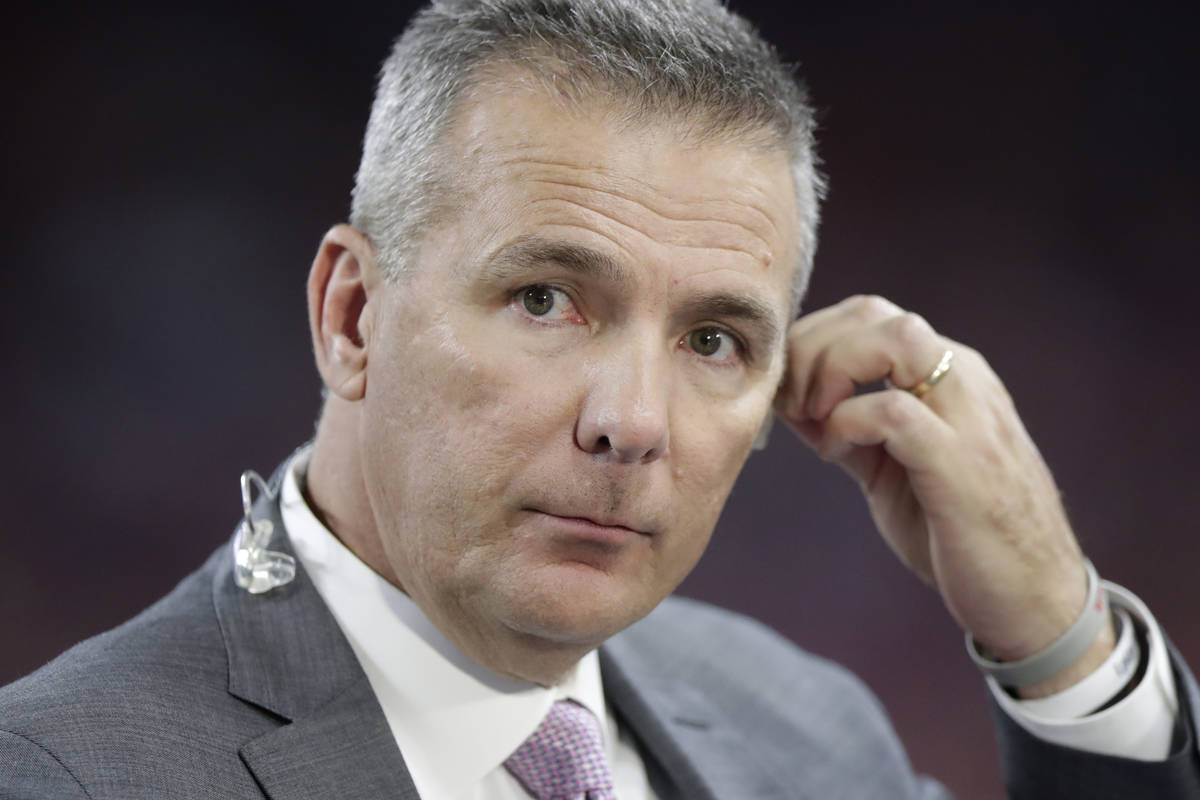 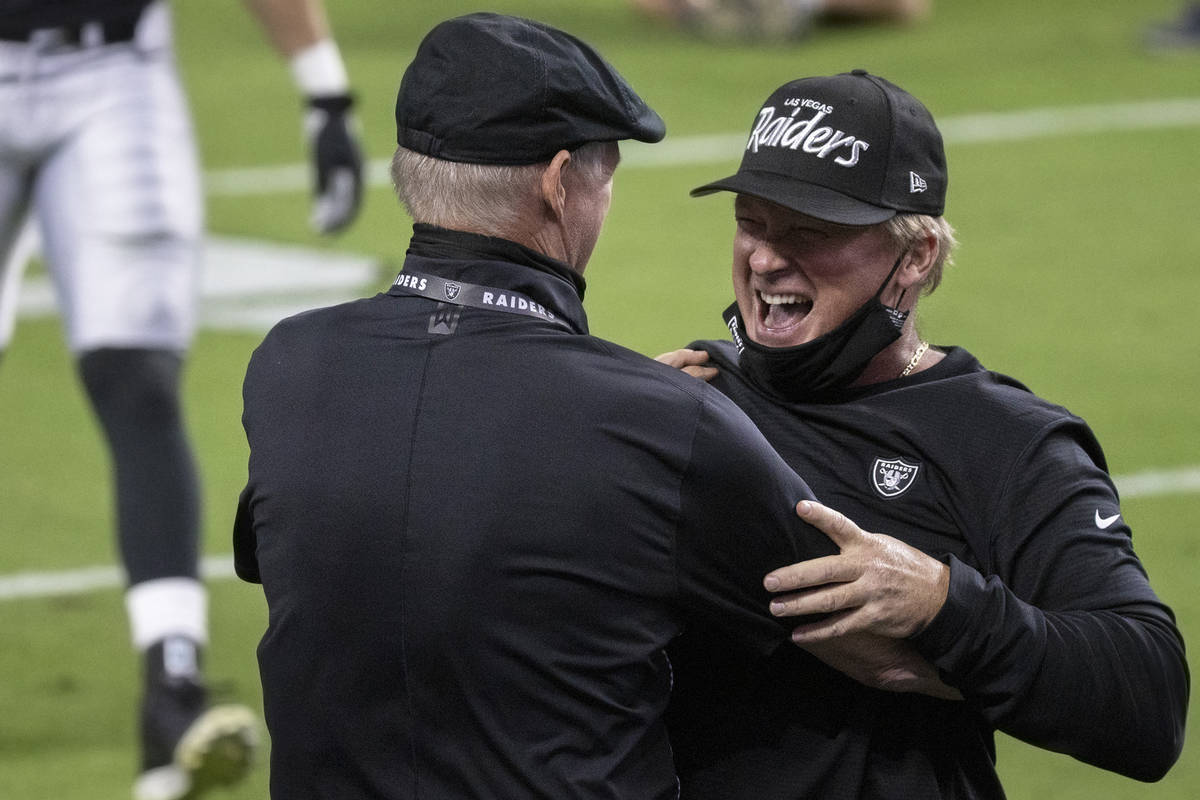 On draft night, months of preparation and back-and-forth discussions between head coach Jon Gruden and general manager Mike Mayock will cease and the Raiders will decide what to do with their 17th pick in the first round.

At that moment, one of the most powerful head coaches in the NFL will make an official call on who the Raiders will select. As the team’s ultimate football authority, Gruden, not Mayock, has final say on every important personnel decision, including the draft, free agency and the makeup of the 53-man roster.

In a league in which the chain of command is not always clear, Gruden is one of seven head coaches in the NFL who are generally acknowledged to have that kind of authority. It came with the 10-year, $100 million contract owner Mark Davis used three years ago to lure Gruden back to coaching from ESPN.

As Year 4 of his return begins, Gruden needs to speed up the incremental progress of his first three seasons, which saw the team go from 4 to 7 to 8 wins. A playoff berth is the obvious next step.

He also needs to fare better in free agency and the draft than he did in his first three in charge. While Kolton Miller, Gruden’s first draft pick in 2018, and the selections of Darren Waller, Josh Jacobs and Hunter Renfrow have turned out well, the jury is still out on draft picks Cle Ferrell, Damon Arnette, Henry Ruggs and Johnathan Abram.

Full autonomy for a head coach is not new. At various times in NFL history, that has been the case. Hall of Famers Vince Lombardi, Bill Parcells, Paul Brown and Mike Holmgren all had the final say.

On other NFL teams, the general manager or head of football operations holds the ultimate power.

Handing the reins to the head coach has had mixed results.

Bill Belichick has won six Super Bowls in charge of the Patriots. Pete Carroll and the Seahawks have won one Super Bowl and been to another during his time in Seattle. Kyle Shanahan has already guided the 49ers to a Super Bowl appearance.

On the other hand, Chip Kelly bombed as the ultimate football authority with the Philadelphia Eagles, as did Nick Saban during his short tenure with the Miami Dolphins.

The jury remains out on the three other head coaches who currently have final say: Ron Rivera of the Washington Football Team, Urban Meyer of the Jaguars and Matt Rhule of the Panthers.

“It doesn’t matter who it is or what the power structure is,” said Super Bowl-winning head coach Brian Billick, now an analyst with the NFL Network. “If you’ve got the wrong guy pulling the trigger, you’ve got a problem.”

So do the Raiders have the right guy at the controls?

Former NFL executive Mike Lombardi has been less than complimentary of Gruden, having worked for him with the Raiders from 1998 to 2001. In a recent podcast, Lombardi blasted Gruden, citing his impulsiveness and preference for veterans over young players.

“Mike Mayock is in a really hard situation,” Lombardi said on The Pat McAfee Show. “He’s working for a coach that is really not the best personnel guy. He’s impatient. He wants vets. He falls in love and out of love quickly.”

Lombardi declined when asked last week to elaborate on those comments.

Mayock and Gruden don’t have much to say about their relationship either, at least not publicly.

Mayock declined to respond when asked about the outside perception that he and Gruden have a strained working relationship.

“All I can tell you on my relationship with Jon is the two things I love about Jon Gruden and respect the most is he has an incredible passion for the game of football and a work ethic like I’ve never seen,” Mayock said. “Those two things I respect as much as I can respect anything. I just try to match his passion and work ethic.”

Gruden hired Mayock to replace Reggie McKenzie as general manager after the 2018 season.

Shortly after being hired, Mayock conceded that he reported to Gruden. “In all honesty, Jon’s got final say, if it ever comes to that, and I’ve got zero problems with that,” he said.

When asked Thursday about his relationship with Mayock and how important it was for him to have the final say in personnel matters, Gruden would only say “I just want to win games.”

Regardless, given the security Gruden has with his long-term contract, if a change is made, it figures to be Mayock, not Gruden, who will be looking for work.

There is, however, an inherent danger in giving the head coach the final say, according to two people who have worked under such an arrangement. The coach’s vantage point often is more short term compared to the longer-range lens of a general manager.

Former general manager Mike Tannenbaum, now an analyst with ESPN, has operated in several power structures. During part of his tenure with the New York Jets, it was Parcells, the head coach, who had final say. In Miami, Tannenbaum was the primary decision maker.

The head coach model, according to Tannenbaum, can work provided the necessary infrastructure is in place and, more importantly, a coach is open to collaboration and can articulate his vision to the support staff.

“You want to have checks and balances the best you can,” Tannenbaum said. “With coach Parcells, it worked great because we all knew what he wanted. Our job was to go execute that vision as best we could.”

No matter the scenario, the process of finalizing a key decision involves input and insight from a wide range of voices, from scouts to assistant coaches to the medical staff. There can never be too much information. In the best organizations, every opinion is valued and measured.

When he was in New York, Tannenbaum brought with him a slogan that captured that sentiment. “In God we trust. For everybody else we need data” is how he put it.

“Whatever decision is made, it has to be an organizational decision. … You’re either all in or you’re all out. To operate any other way, you’re just waiting for the organization to fail.”

“That was very clearly stated,” Billick said. “But Ozzie is the most collaborative people, one of the best listeners, I’ve ever been around.”

Tannenbaum has had similar power to Newsome. But he was always cognizant of the needs and wishes of the coach. “I certainly wasn’t going to do anything that the head coach wasn’t comfortable with,” Tannenbaum said.

That said, when it comes time to make a decision, whether it’s the general manager or the head coach, the entire organization must be aware and respectful of where the ultimate power rests. “Everyone has to know who the final voice is,” Ross said.

Said Billick: “It’s like play-calling, you want everybody to have a say … But at the end of the day, someone has to make the call and that structure has to be clear cut.”

Without a clear chain of command, there is chaos.

“That’s when there was … a lot of in-fighting and people going to the owner,” Ross said. “You just had so many people involved in it.”

The ability to listen

In spite of Belichick’s image as a dominant and unbending authoritarian, people who work with him describe him in completely different terms. In fact, Belichick encourages opposing views and dissenting ideas.

It’s worth noting that even head-strong personalities like Gruden can evolve and mature over time. Plus, given his contract, it’s clear the Raiders are committed to Gruden for the long term.

With that comes the understanding that remaking the organization as a viable, consistent power requires time and patience. And there is evidence that security has changed Gruden’s preference for the quick fix provided by older players.

After starting eight first- or second-year players last year, the Raiders are trending even younger in 2021 after the recent trades of veteran offensive linemen Gabe Jackson, Rodney Hudson and Trent Brown.

Meanwhile, for all the talk that Gruden would immediately jettison quarterback Derek Carr in favor of his own hand-picked quarterback, Carr is among the only players to survive the massive Gruden overhaul.

As Carr and Gruden head into their fourth season together, there is speculation Gruden will extend Carr’s contract.

“That security will make you look at things a little differently,” Ross said.

5
Raiders schedule has plenty of challenges on back end