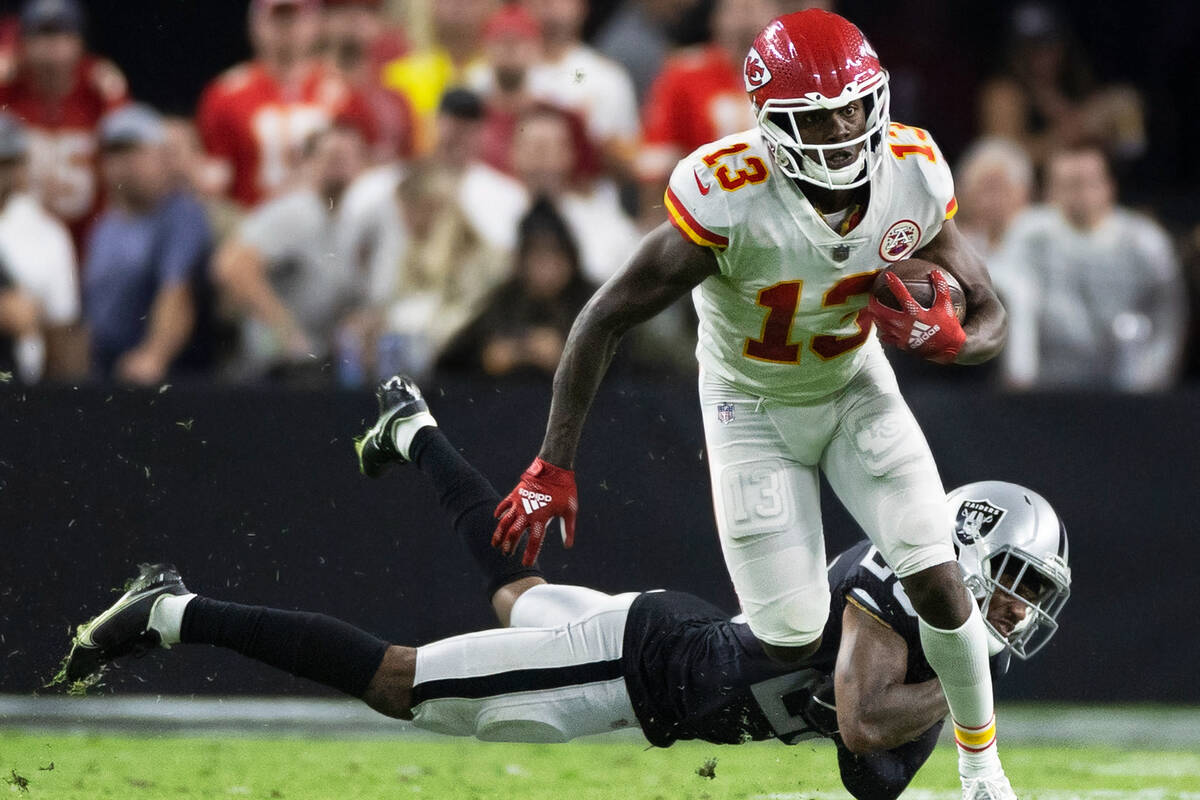 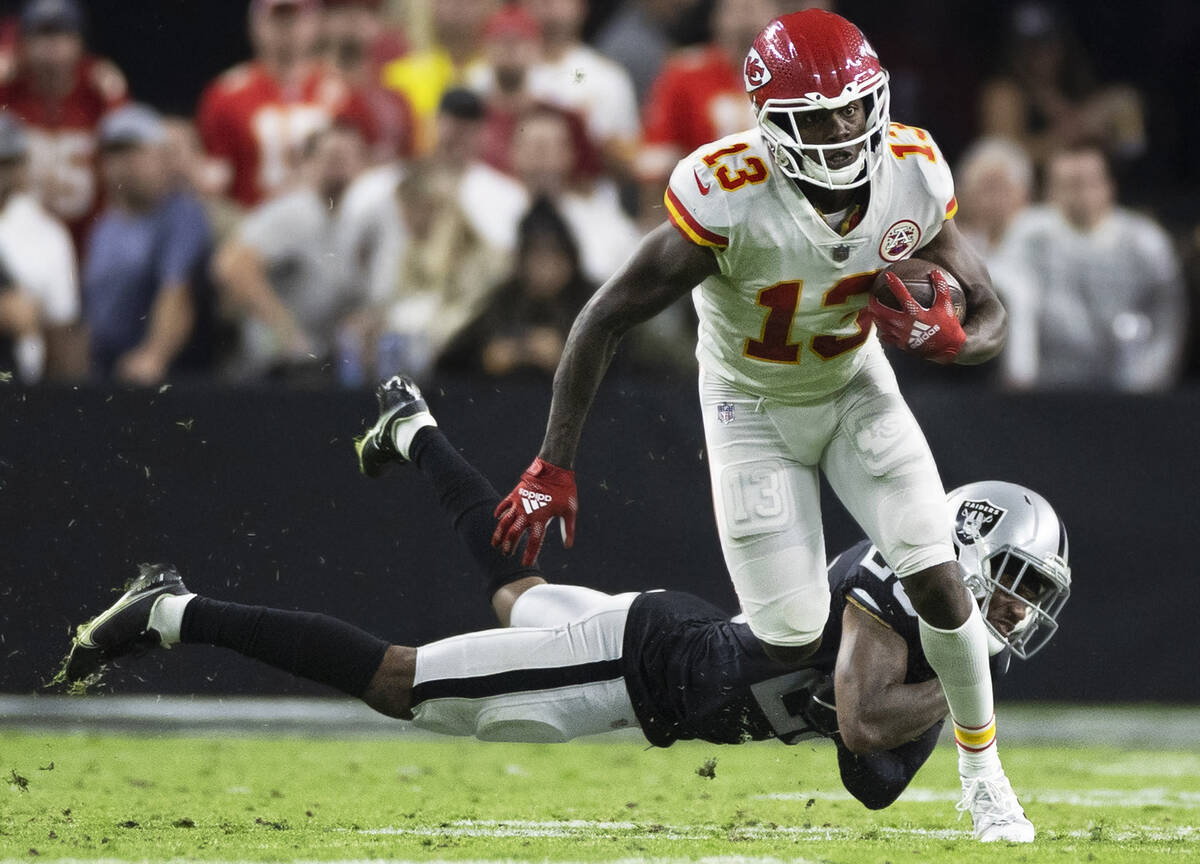 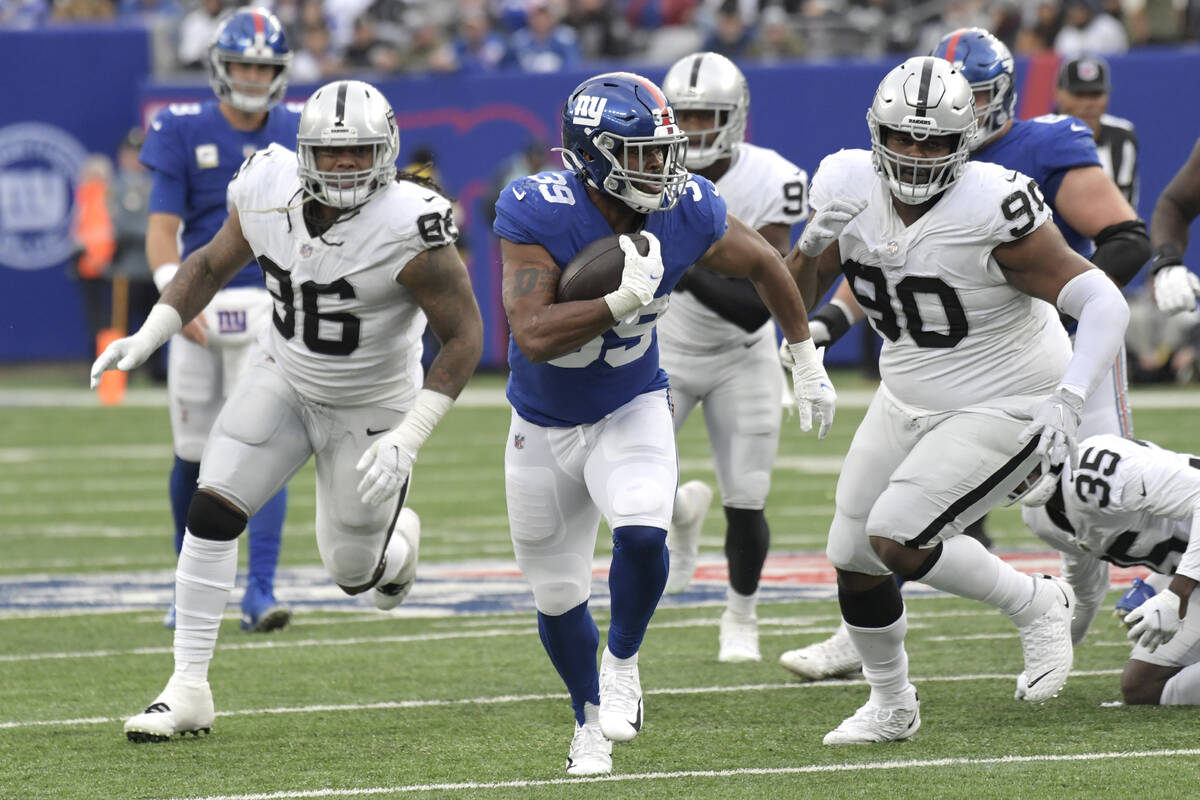 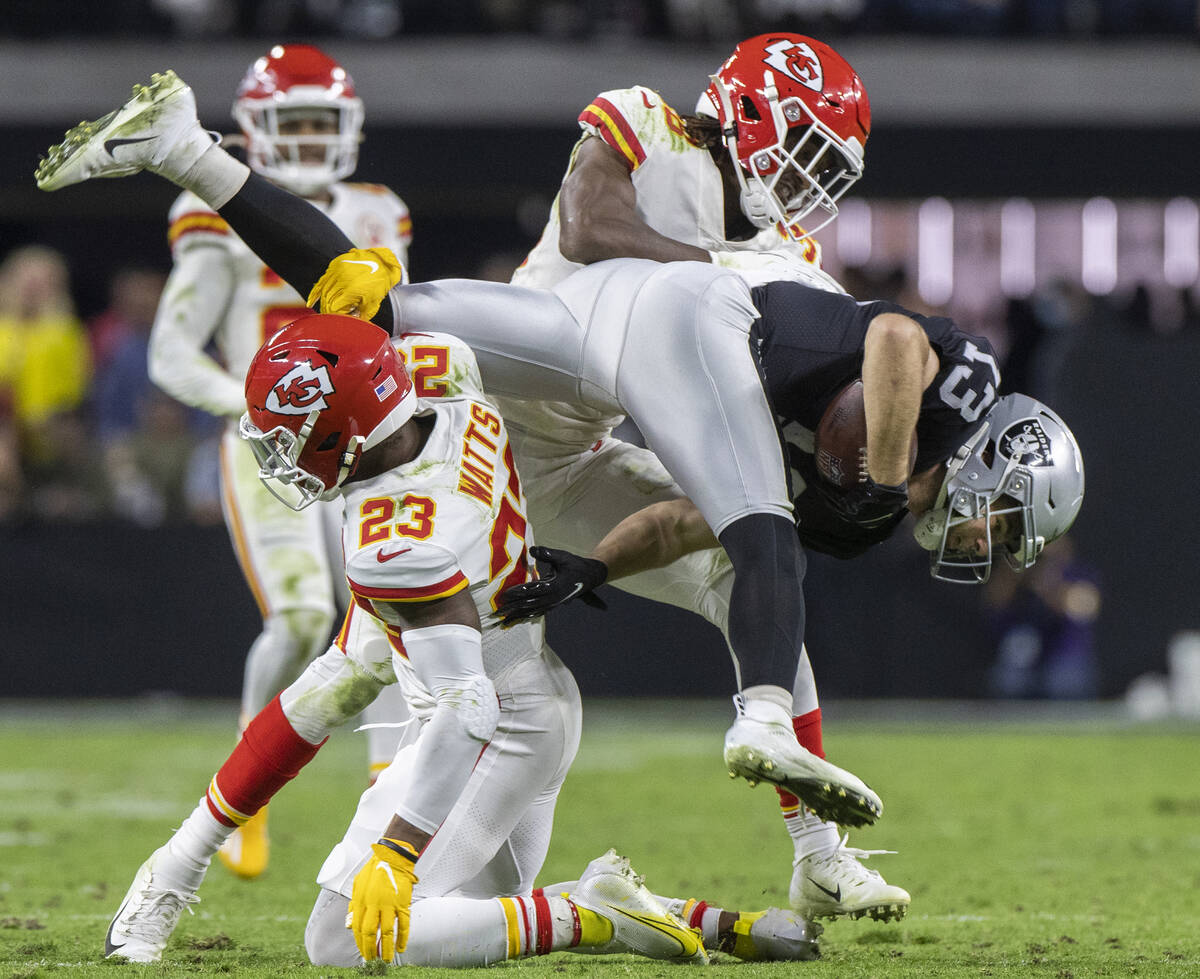 Raiders wide receiver Hunter Renfrow (13) is up ended by Kansas City Chiefs defensive back Armani Watts (23) in the second half of an NFL football game on Sunday, Nov. 14, 2021, at Allegiant Stadium, in Las Vegas. (Benjamin Hager/Las Vegas Review-Journal) @benjaminhphoto 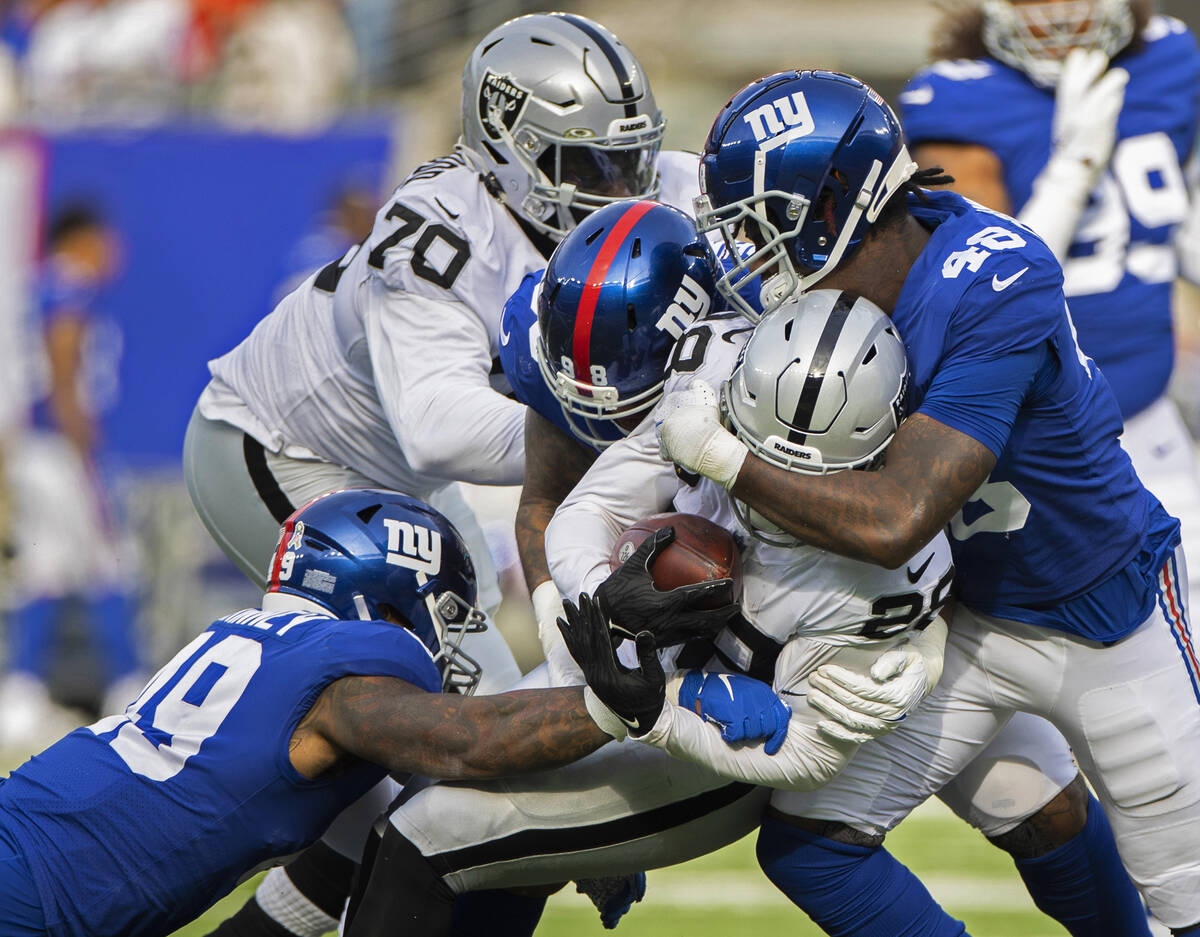 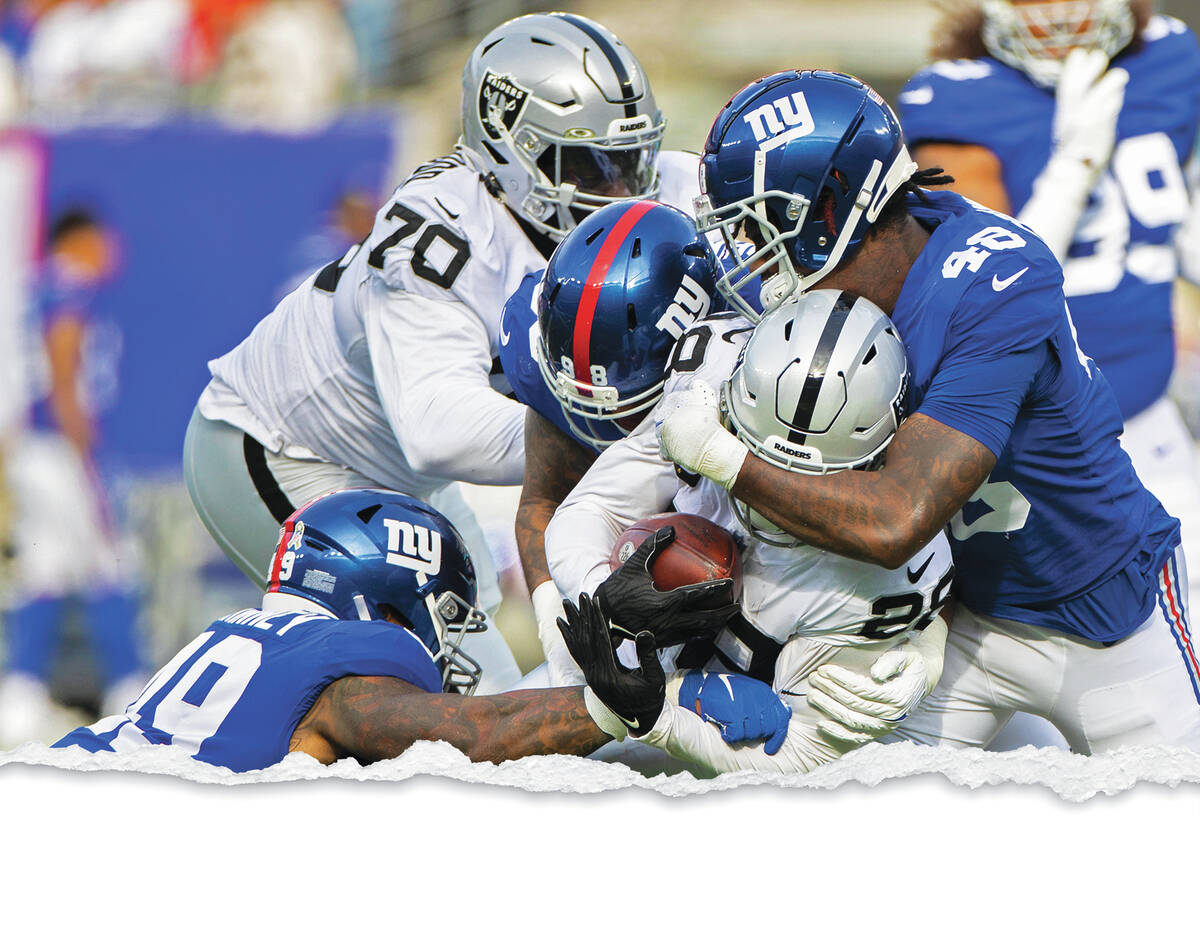 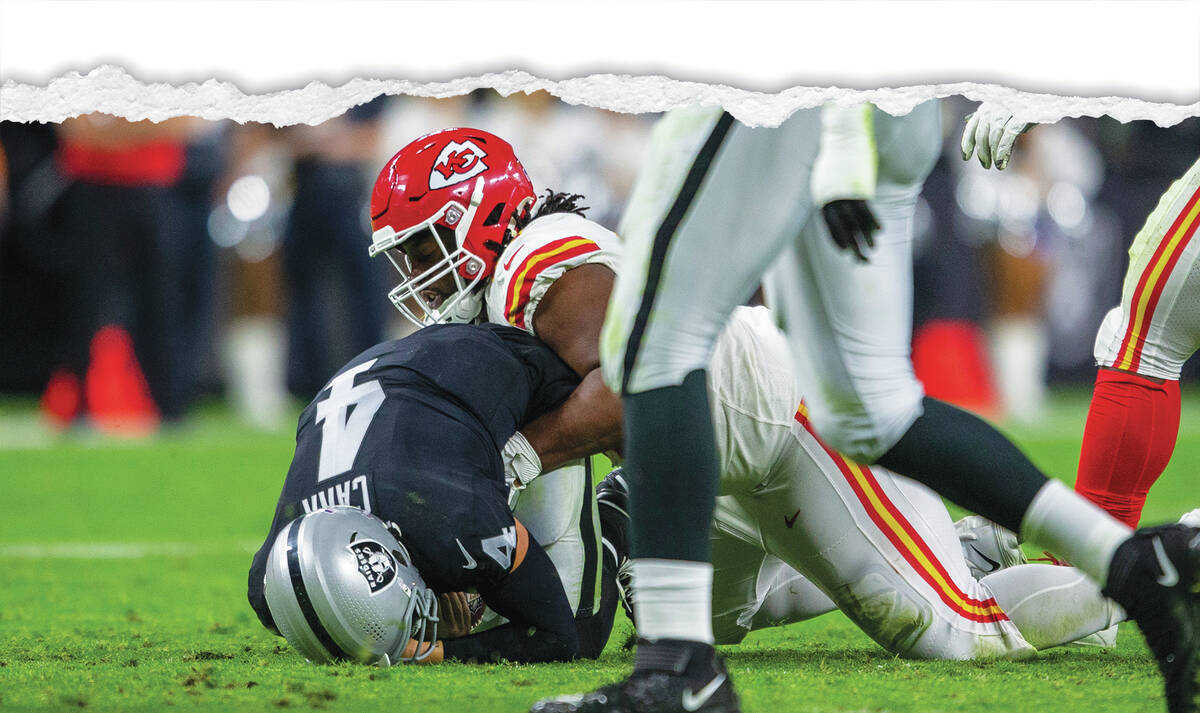 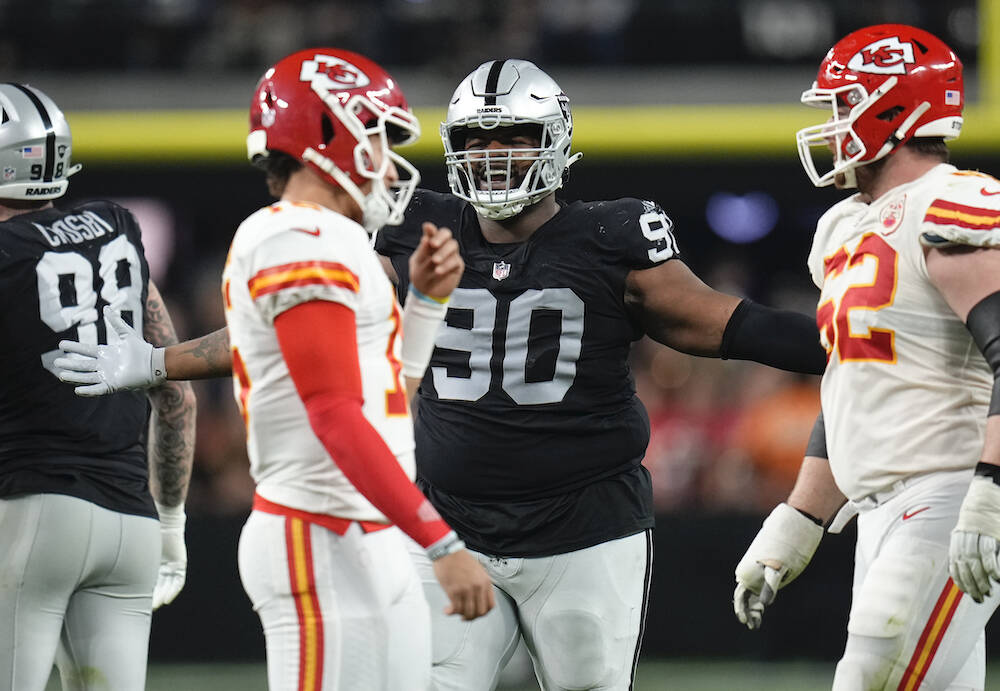 It’s difficult to pinpoint what the issues are that have led to the recent losses that dropped the Raiders from 5-2 to 5-4.

But it’s easy to grow concerned, given how the team has been rocked by one off-the-field calamity after another and has faltered badly down the stretch the last two seasons.

Every team has bad games. But while the Raiders’ problems over the last two weeks were different, the results were the same: a pair of defeats.

There were obvious red-zone issues two weeks ago in the 23-16 loss to the Giants. The Raiders moved the ball up and down the field only to score just one touchdown on six trips inside the 20-yard line.

Last Sunday in a demoralizing 41-14 loss to the Chiefs, Gus Bradley’s defense, which has been steady much of the year, started to show signs of decline. The unit was completely gashed as the combination of poor communication in coverage and shaky tackling that was a problem last season reared its ugly head again.

Even the normally dependable special teams had a protection breakdown during the loss against the Chiefs.

Throughout both games, inconsistency on the offensive line was a problem, particularly all the penalties, but that’s been a theme all season.

And the running game has been nonexistent at times, which hasn’t been helped by consistently falling behind with bad starts. The Raiders have a minus-31 point differential in the first quarter this season, third worst in the NFL.

But Eric Eager, from his perch above the fray as the Vice President of Research and Development for Pro Football Focus, a website that focuses on thorough analysis of the NFL, said this week he doesn’t see a reason for the Raiders to push the panic button, at least not yet.

“I think they’re fixable,” he said of the Raiders’ issues. “I still have them with like a 44 percent chance to make the playoffs, so that’s reasonable. Derek Carr is still leading the league in our highest-graded throws, but they do have our sixth-hardest remaining schedule, which is a problem.”

PFF’s Sam Monson, the site’s lead NFL analyst, said on his podcast there has to be some concern after two consecutive subpar performances. He didn’t excuse either side of the ball.

“It’s one of those things where one game you could throw out or ignore or park to the side for awhile,” he said. “When it happens two games in a row, it’s like, ‘OK, we have to start thinking about this.’”

After the loss to the Chiefs, Monson said all the talk was about how the Raiders defense “came in with this game plan that had no correlation to how teams have been slowing down the Chiefs and got gashed because of it.”

He added, “The flip side is Kansas City’s defense absolutely murdered the Raiders offense.”

It’s also possible the real Raiders team is the one that has shown up in these last two games and the start of season was just a bit of fool’s gold.

FootballOutsiders.com has the Raiders as the 23rd best team in the league. Aaron Schatz, the founder and editor-in-chief of the site, said that’s not much of a change from when they were 5-2.

“Even when they were winning, we only had them around No. 20,” Schatz said. “They haven’t been very good in our numbers all year, so it’s not like I’d say they declined. It’s just more like their luck has turned.”

Schatz cited two of their first three wins coming in overtime, including one against a Dolphins team that isn’t as good as was perceived at the time.

He believes their biggest issues are the running game and depth in the secondary, evidenced by their No. 29 schedule-adjusted ranking in covering tight ends.

“Their running game is poor and their blocking is poor,” he said. “They’re 27th in rushing by our numbers.”

Still, there’s hope. Schatz and Eager both believe newly acquired wide receiver DeSean Jackson will start to stretch defenses just through his presence — in the way Henry Ruggs did — once he’s more acclimated to the offense.

And a win Sunday would be an elixir to start making everyone look at the Raiders’ situation a bit differently.

Monson believes that will happen against the Bengals.

A loss, however, would be devastating. “This is a game where if they can’t get right, it’s time to start writing off the season,” Monson said.

“Without getting into detail, I mean, you watch the tape the last two weeks and we see, OK, this is what we need to do. Boom, that and that,” Carr said. “You see it and you try to rep it; you try and replicate it in practice. … So the message to the team is simple … we got to keep doing what we do. It’s won us five games.”

The Raiders still believe they are a good team that is just in need of a couple of tweaks.

“It’s very easily-fixable things,” running back Josh Jacobs said. “But to be making the same mistakes this late in the season …”

He said it’s both frustrating and encouraging to feel like the team is so close to playing well. “Little simple things like jumping offsides, not lining up on the ball, holding penalties. Things that are preventable just by being more disciplined. Those are the biggest things.”

It would also help to execute on third down.

One of the downfalls against the Chiefs was too many drives halted early that led to Kansas City controlling the ball and the game.

The Raiders were 1-for-9 on third down and are now converting just 29.3 percent in the four games since Jon Gruden resigned, 31st in the league over that span. They had been 13th best at 41.4 percent at that time.

It’s been that kind of an up-and-down season for the Raiders. Interim coach Rich Bisaccia said managing those highs and lows will help to determine the direction his team heads down the stretch.

“Anytime you ride the roller coaster of wins and losses, it’s a challenge to all of us, coaches and players and fans,” he said. “You can’t get too high off of a win because then that lasts too long and ends up getting stuck to you. And if you stay down too long after a loss, then that does multiply into more and more and more losses.”

The challenge, Bisaccia said, is maintaining an even keel.