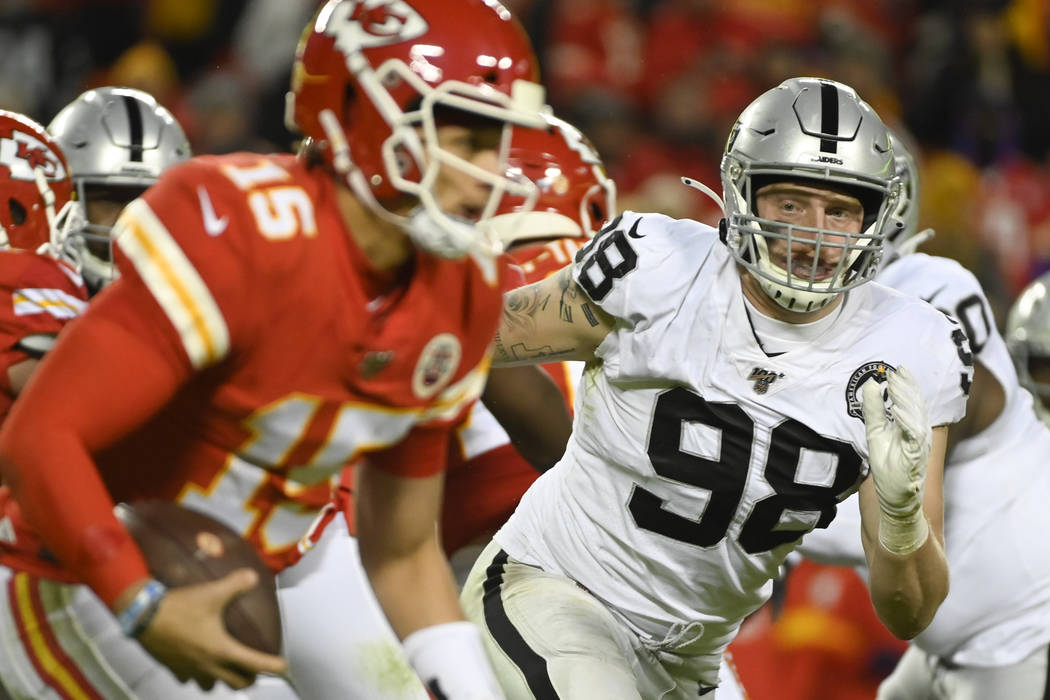 In many ways, the defensive performance by the Raiders in Sunday’s 24-17 victory over the Chargers was one of its best of the season.

Certainly the run defense, which allowed the Chargers just 5 yards on 13 carries in the first half, forced them to become one-dimensional and that’s always easier to defend. And a 21-7 advantage plays right into a defense’s hands as well.

And while not everything was perfect — Clellin Ferrell still has issues in the run game, especially on the goal line, and Nevin Lawson seems to give up as many plays as he makes — that was a needed feel-good game for defensive coordinator Paul Guenther and most of his troops.

But there is one growing worry: rookie end Maxx Crosby, who has been a breath of fresh air most of this season, has seemed to hit the rookie wall in the past three games.

The rookie wall is used to describe when a first-year player, who is used to playing a shorter (12 games, spaced out) schedule in college, starts to become fatigued toward the end of their first NFL campaign. Many of these players have largely been going non-stop for a full calendar year.

Draft-eligible players almost immediately start draft workouts after their college season ends and those run right up until the draft, with pro days and private team workouts mixed in. Once drafted or signed, the players immediately are put into team rookie mini-camps and offseason practices. Most continue to work out for the off month before training camp, then it’s non-stop until the season ends.

That’s a huge adjustment — football is, however, a full-time job now — and most rookies have problems dealing with it at some point.

For much of the season, Crosby looked like he was going to run through the rookie wall. Of the 42 quarterback pressures he has posted on the season, 30 came in weeks 8-13. He was, in a word, spectacular. While he had some issues being disciplined in the run game — like Ferrell, Crosby loves to just get up field, often leaving huge holes to run in behind him — Crosby was largely a wrecking ball to the opposing offense.

When he wasn’t harassing the quarterback, he was chasing down ballcarriers from behind. As a two-way defensive end who is expected to rush the passer and play the run, Crosby was the most impressive rookie I’ve seen since J.J. Watt of the Texans and, at times, you’d swear Crosby was a young Watt.

In the 42-21 home loss to the Titans on Dec. 8, Crosby was nowhere to be found as Tennessee did whatever it wanted to on offense — 552 total yards, 5.0 yards per carry and a 140.4 passer rating for Ryan Tannehill. A win in that game would have the Raiders as the AFC sixth seed, needing just a win against Denver to qualify for the postseason. The Titans have a good offensive line and a pair of excellent tackles in Taylor Lewan and Jack Conklin, but it had to be disappointing to not have Crosby register a single quarterback pressure.

Now, this isn’t to say Crosby has played poorly during his recent slump; he hasn’t. Actually, against the Chargers, Crosby played well with two pressures and two stuffed runs (1 yard or fewer outside of short yardage), and he was disciplined in what he did. But Raiders need him to be impactful to make this defense work against better offensive teams than the Chargers, and he hasn’t been.

Considering Crosby has gained 35 pounds from the end of his junior season at Eastern Michigan, it’s understandable why Crosby might be feeling a bit worn down.

Overall, with the Raiders all but eliminated from the postseason, Crosby’s recent slump isn’t a huge deal. Hopefully, lessons will be learned and applied next season because the Raiders will need a full, impactful 16 games — possibly more — from him if they expect to be in the playoffs in their first Las Vegas season.

Even as a fourth-round pick, Crosby has become that important to this team.