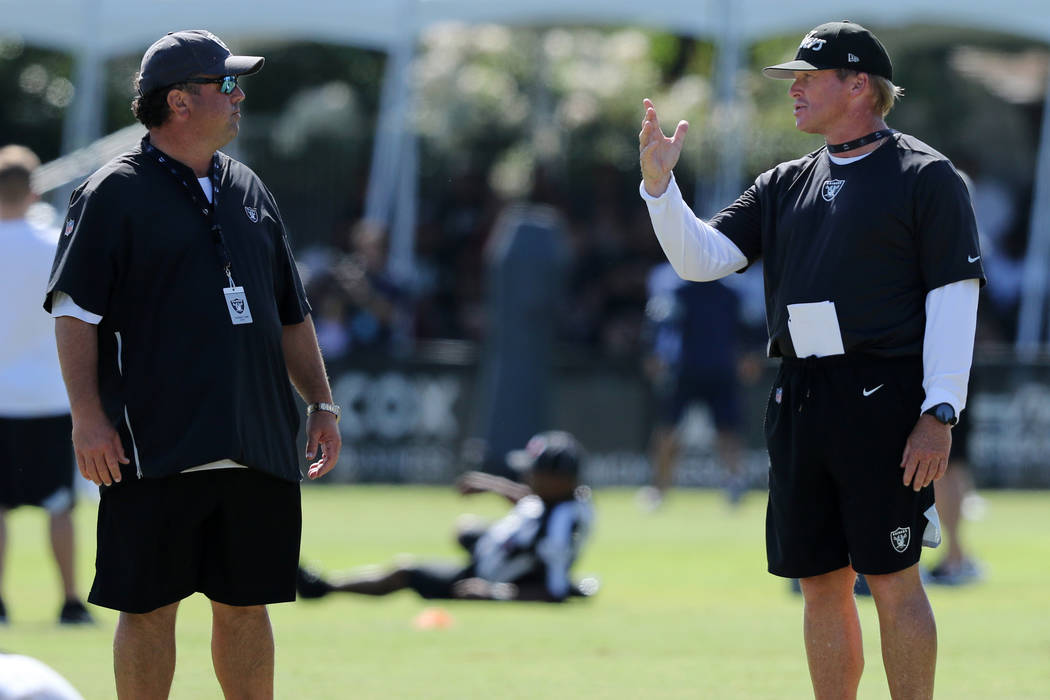 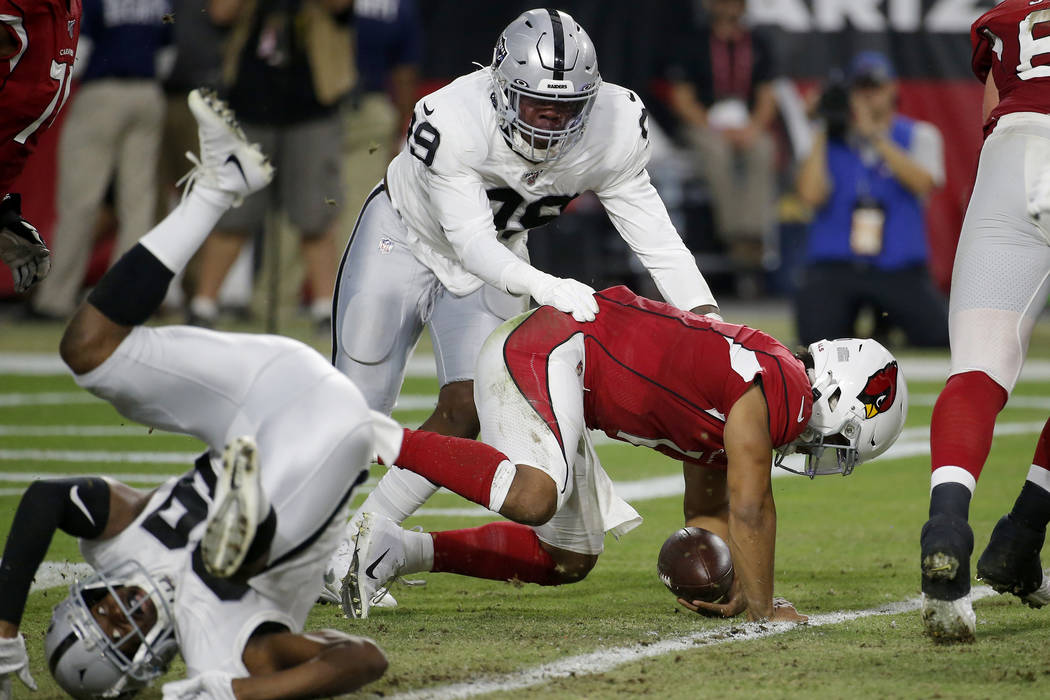 Arizona Cardinals quarterback Kyler Murray (1) is tackled in the end zone for a safety by by Oakland Raiders free safety Lamarcus Joyner, left, as defensive end Arden Key (99) pursues during the first half of an an NFL football game, Thursday, Aug. 15, 2019, in Glendale, Ariz. (AP Photo/Rick Scuteri)

NAPA, Calif. — After finishing the 2018 season last in a number of key defensive metrics — including points allowed and sacks — the Raiders set out to improve the unit with a number of culture-changing players.

Defensive coordinator Paul Guenther had a better name for them on Sunday, terming the acquisitions his “new toys.”

Guenther got his first chance to show off those offseason presents in the Raiders’ 33-26 preseason victory over the Arizona Cardinals on Thursday, and the first-team defense impressed in its debut.

In four possessions against Cardinals No. 1 overall pick quarterback Kyler Murray, the Raiders defense held Arizona to just 12 total yards. Factoring in penalties, the Cardinals had a net minus-13 yards when the Raiders’ starters exited after forcing three punts and recording a safety.

“It was fun. There was a lot more speed on the field. We’ve got guys who can cover, guys who can blitz, play the run,” Guenther said. “I told the players, you kind of know what it’s supposed to look like when it’s right, and we had some glimpses of that the other night.”

The starters played only 20 snaps, but in that time the Raiders sent Murray steady pressure — which is a little unusual for a preseason game. At times, the unit seemed to confuse the young quarterback, who finished his second preseason game completing just 3 of 8 passes for 12 yards and adding four more on the ground.

“I want to see those guys have to communicate and have to do different things instead of playing one or two coverages,” Guenther said.

While some of the blitzes may have appeared exotic at first glance, Guenther said he kept the scheme vanilla for this preseason matchup by playing just three or four coverages.

Linebacker Vontaze Burfict, who played the first six seasons of his career under Guenther with the Cincinnati Bengals, said Sunday that sending so much pressure wasn’t out of the ordinary for the veteran coordinator.

“I think that’s just the way we run defense,” Burfict said. “It’s been like that since I’ve been with ‘Pauly G,’ so nothing new to me.”

Burfict calls the defensive signals as the club’s middle linebacker, and noted that communication is paramount for sending pressure — which is why it’s important for the team that recorded a league-low 13 sacks in 2018 to practice it now.

“I mean, blitzes are obviously a key part of football because you’re going to run them in a down-and-distance that’s key in the game,” Burfict said. “So, I think it’s great that we got it on film and get to coach it when we get in film study.”

Coming over from Cincinnati in the offseason, Burfict is one of the players the Raiders are depending on to help change the defensive culture. He’s been suspended in each of the past three seasons — the first two for repeated violations of player safety rules, and last year for violating the league’s policy on performance-enhancing drugs. But given his strong history with Guenther, there’s reason to believe Burfict’s presence can elevate the Raiders’ defense to a competitive level in 2019.

“I kind of raised him since he was a puppy, and he’s just so smart,” Guenther said. “He knows it all. We can get in and out of different defenses at the line of scrimmage. So it’s like having your quarterback you coached for years running your system on the field.”

If the Raiders continue to get results like they did on Thursday, Guenther, Burfict and the rest of the defense might vastly improve in 2019.

“Hopefully we can continue to get better and understand the details of everything we’re doing,” Guenther said.

— No. 4 overall pick Clelin Ferrell was on the field for 21 plays Thursday, and Guenther said he was “a lot better” than in his preseason debut against the Rams. While Ferrell was flagged for a pair of illegal use of hands penalties, Guenther called that an easy fix.