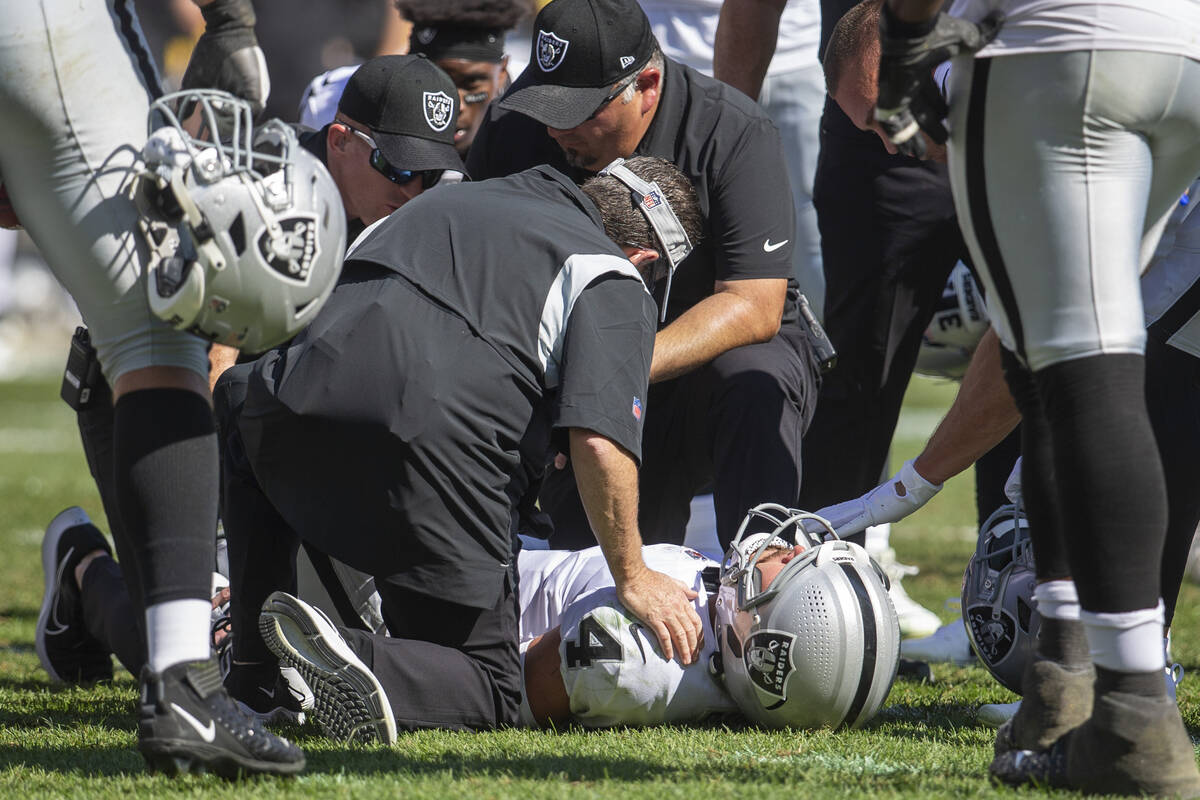 Raiders quarterback Derek Carr (4) remains down after getting hit as he threw a touchdown pass to Foster Moreau, not pictured, during the third quarter of an NFL football game on Sunday, Sept. 19, 2021, at Heinz Field in Pittsburgh. (Heidi Fang/Las Vegas Review-Journal) @Heidi Fang

The first meeting between Jon Gruden and Derek Carr was, as they say, a tone-setter.

“You’re not allowed to get hurt,” Gruden, the new Raiders head coach at the time, told his quarterback. “If you get hurt, I’m going back to Florida.”

Not that Carr needed the added incentive to make sure he was available every Sunday — physical ailments or not. Aside from the back injury he suffered in 2017 that sidelined him one game or the broken leg that ended his season with one game left to play in 2016, Carr just doesn’t miss football games.

Nevertheless, the challenge Gruden threw down back in 2018 has helped create a mindset that has stayed with Carr to this day.

Without even knowing what his ankle would look like the following morning, let alone a week later, Carr told himself, Gruden and anyone else who asked, “Yes, I’m playing.”

Call it mind over matter, but Carr has learned over the years that attitude and conviction generally determine ultimate outcomes.

“Any injury you have, the first thing your coach ever asks is, ‘You going to be ready on Sunday? And your first response to that is where you set your mind,” Carr said. Hence the immediate response of “Absolutely, I’m playing.”

“Whereas if you’re up in the air, you’ve already lost the battle in your mind,” Carr explained. “So anything that happens now, it’s ‘Oh, it’s a setback.’ No, I’m just getting it flushed out. It’s a different mindset.”

Obviously, it is much more than merely playing mind tricks with himself. As Carr explained, almost from the moment he was injured — and decided he would play against the Dolphins the following week — he set in motion a detailed process designed to successfully deal with the injury.

It is part and parcel of the game plan he normally follows to get his mind and body right to play on a week-to-week basis. The added element is dealing with a specific injury.

“There’s a process of things I go through for my body when I have an injury,” Carr said. “There’s kind of a 24-hour kind of thing where it doesn’t stop. My day, while I’m awake, is super busy, whether I’m in active recovery or it’s something I’m pushing or going after. Even when I’m going to sleep, I got something going on.”

By Wednesday morning, Carr was a full participant during the Raiders’ walk-through practice. He is expected to be available when they go through a full practice on Thursday. Gruden told the media his quarterback is “good to go” for the Dolphins. At this point, only a major setback would alter that status.

It sounds like Carr isn’t about to alter his mindset or objective. Which has been his M.O. for a while.

Keep in mind that the three broken bones he suffered in Week Four of the 2017 season sidelined him just the following game. He returned two weeks later and played out the remainder of the season.

Last year, a groin injury knocked him out of a game against the Chargers, but he returned the following week against the Dolphins. He also played through a broken finger in 2016.

“It’s definitely a mentality, to know that no matter what it is — a groin or a back or a thumb or whatever I’ve had. An ankle, all of those things. A knee. The first response is: ‘Absolutely I’m playing.’ And now every decision I make in rehab and on the field is to make sure I’m ready to play on Sunday.”