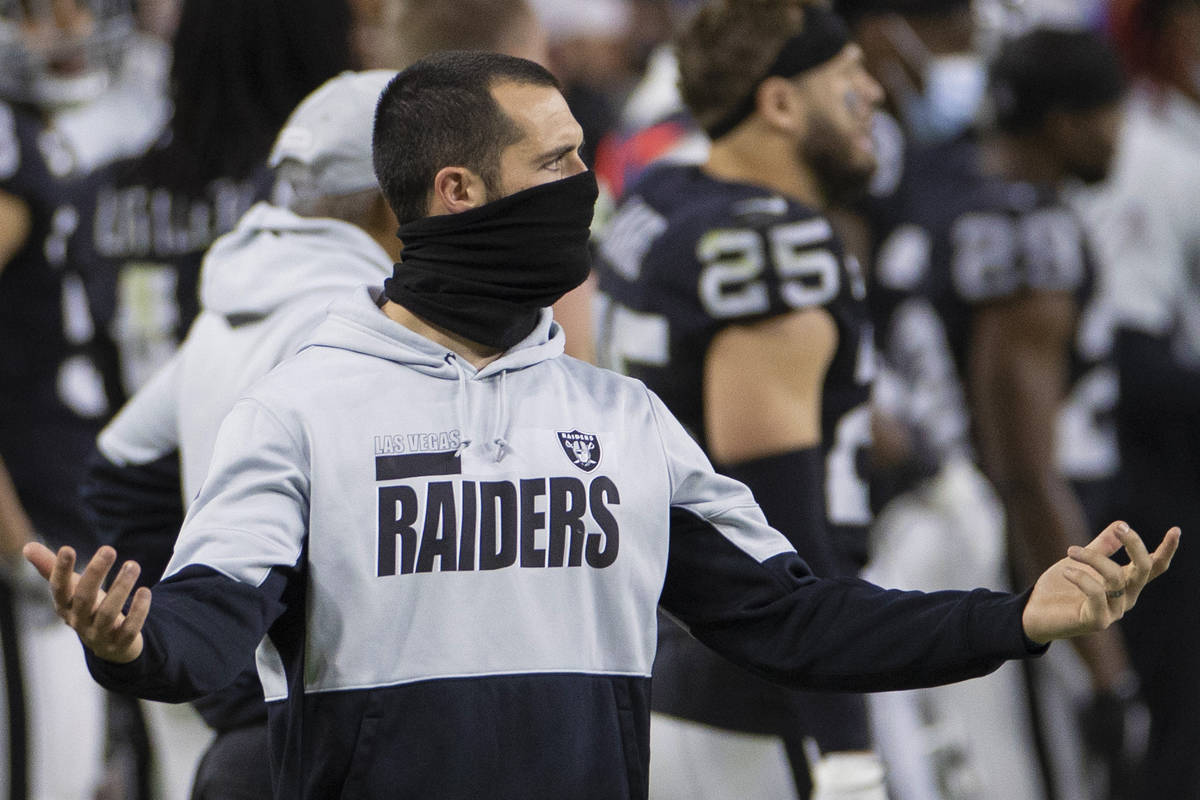 Raiders quarterback Derek Carr puts his hands up in frustration in the fourth quarter during an NFL football game against the San Diego Chargers on Thursday, Dec. 17, 2020, at Allegiant Stadium, in Las Vegas. (Benjamin Hager/Las Vegas Review-Journal) @benjaminhphoto

If Derek Carr has his way, he’ll be the starting quarterback on Saturday when the Raiders play host to the Miami Dolphins.

That’s despite injuring his groin in Thursday’s 30-27 loss to the Los Angeles Chargers that all but eliminated the 7-7 Raiders from the playoffs.

Carr was injured while legging out a third-down scramble late in the first quarter. He immediately left the game and was unable to return. On Friday, coach Jon Gruden pegged Carr’s availability for Saturday’s game against the Dolphins at “50/50.”

Carr, though, is a known gamer who has missed just two regular-season games in his seven-year career and figures to fight as hard as possible to play on Saturday.

A particular motivation for Carr, who has not spoken to the media since his injury, is the importance of the Raiders finishing the season strong. Even if they are not able punch a ticket to the postseason, he knows it’s important to build momentum heading into next season.

Given all the upheaval caused by COVID-19 and the slew of injuries that have struck the Raiders, a 9-7 record would be considered an achievement and a building block.

To get there, the Raiders need to sweep their last two games against the Dolphins and Denver Broncos.

While it is Gruden’s job to protect his quarterback, Carr will make a big push to be on the field with his teammates when they return to practice on Tuesday. His goal will be to convince the coaching staff that he is physically able to perform come Saturday.

If he can’t play, the Raiders will turn to Marcus Mariota, who played well in relief of Carr against the Chargers, completing 17 of 28 passes for 226 yards and rushing for 88 on nine carries.

Carr has had one of his best seasons, throwing for 3,396 yards. He has completed 68 percent of his pass attempts while throwing 24 TD passes and only seven interceptions. He also has scrambled effectively, rushing for 141 yards and two touchdowns.

Carr has fought through injuries in the past.

In his rookie season in 2014, he injured his knee against the Dolphins in London but was able to play two weeks later after the Raiders returned from their bye week. In 2017, Carr missed just one game after suffering a back injury against the Denver Broncos.

The only significant time Carr has missed in his career was when he broke his leg in the second-to-last regular-season game of the 2016 season and could not play in the regular-season finale or the wild-card playoff game. The Raiders lost both.

Carr’s determination to finish the season strong is shared by Gruden.

“We’re going to continue to fight, continue to develop and continue to work hard and try and get our eighth victory and see if somehow we can get a winning season, which would be a great accomplishment,” Gruden said.

Doing so would halt the frustrating late-season swoon that has seen the Raiders lose four of their last five games.