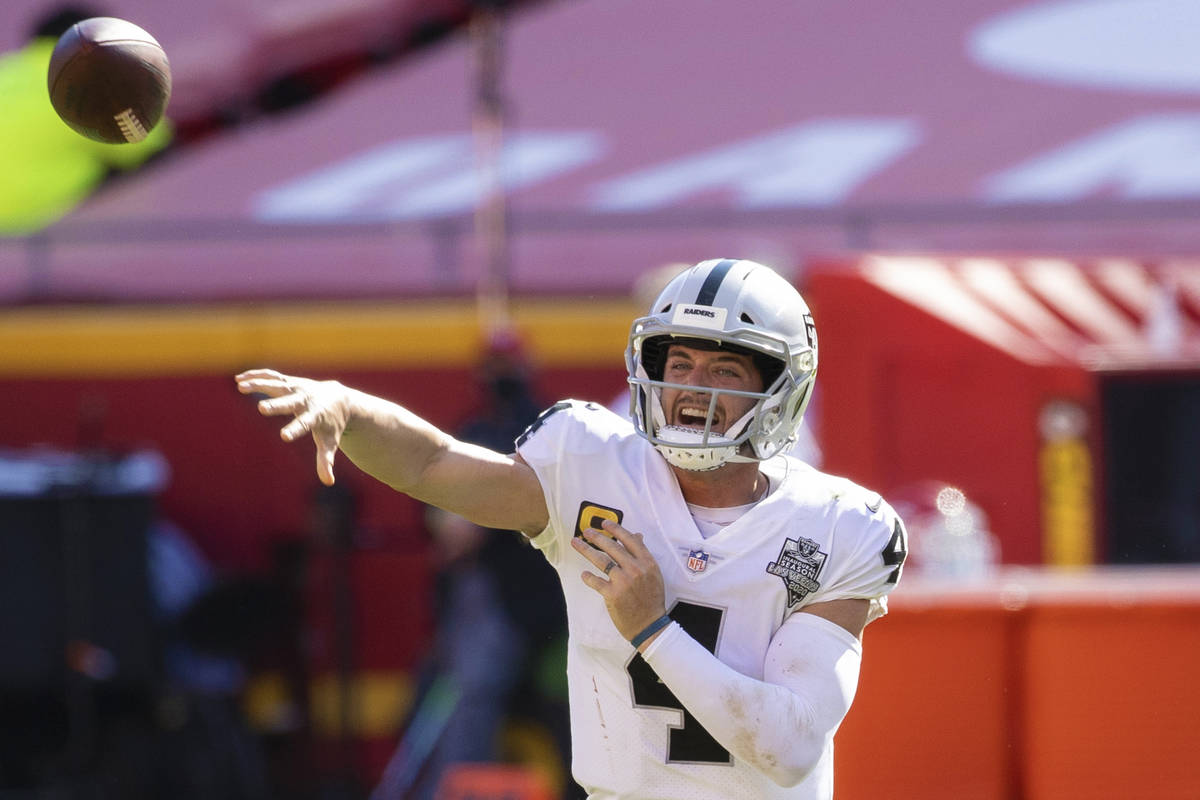 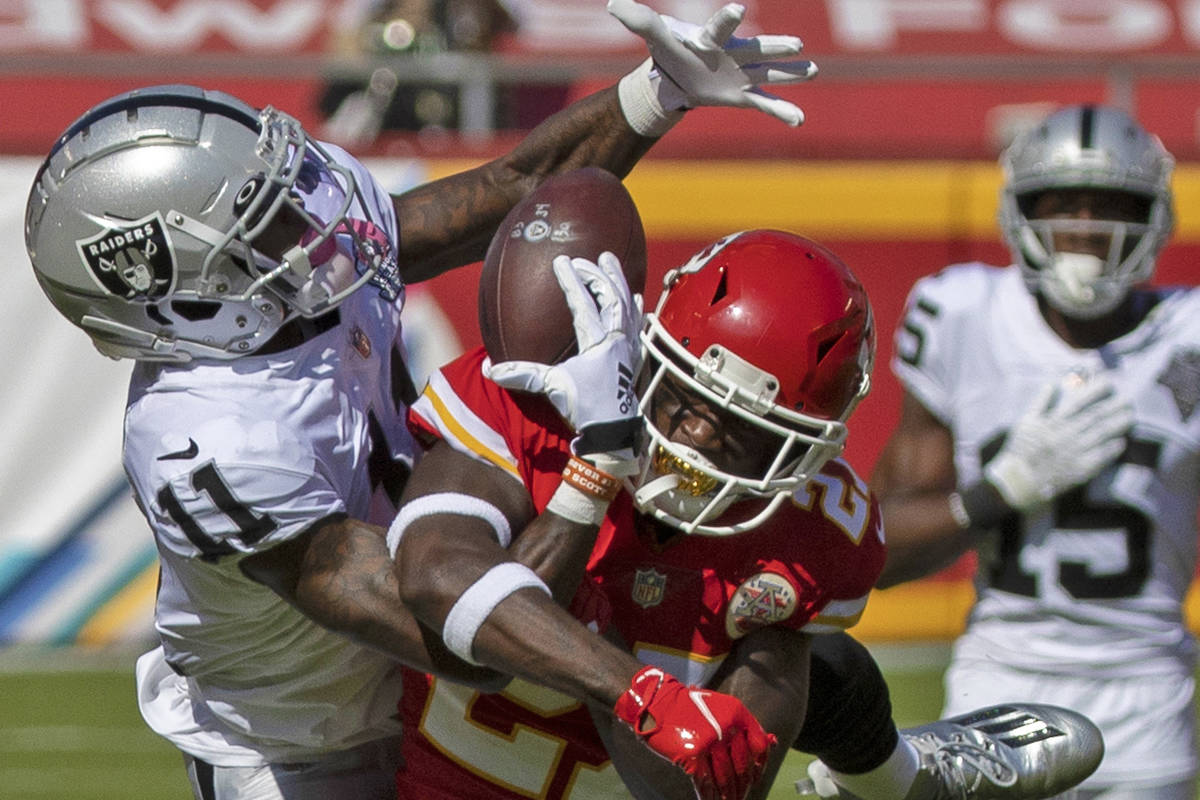 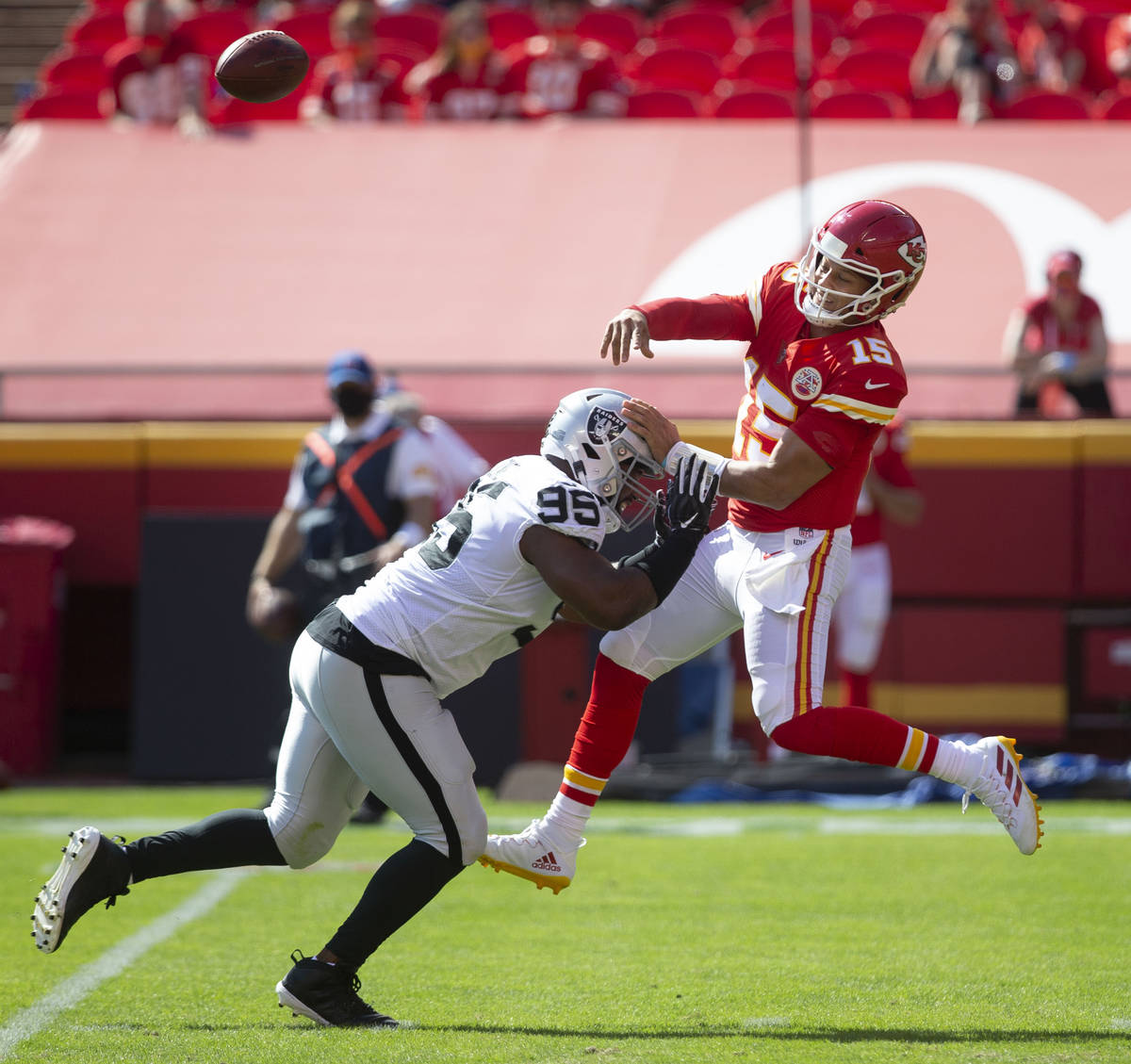 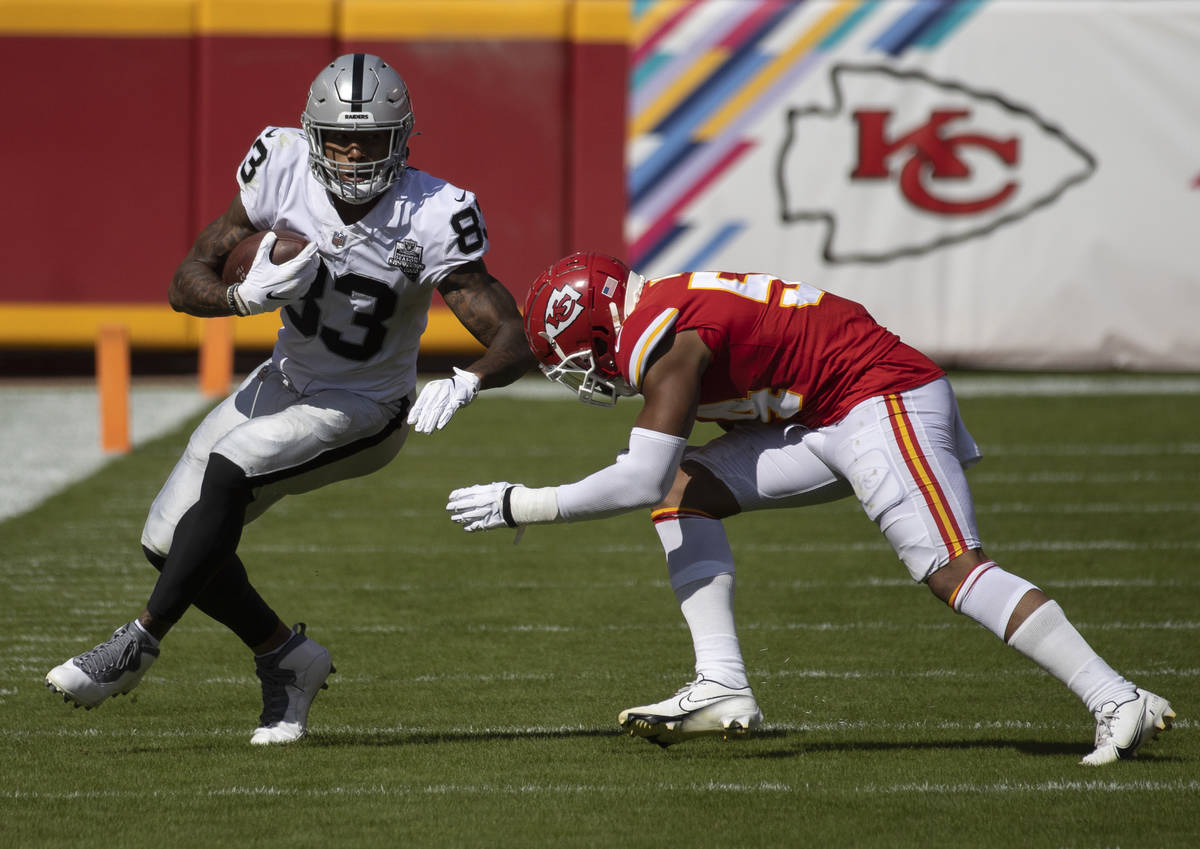 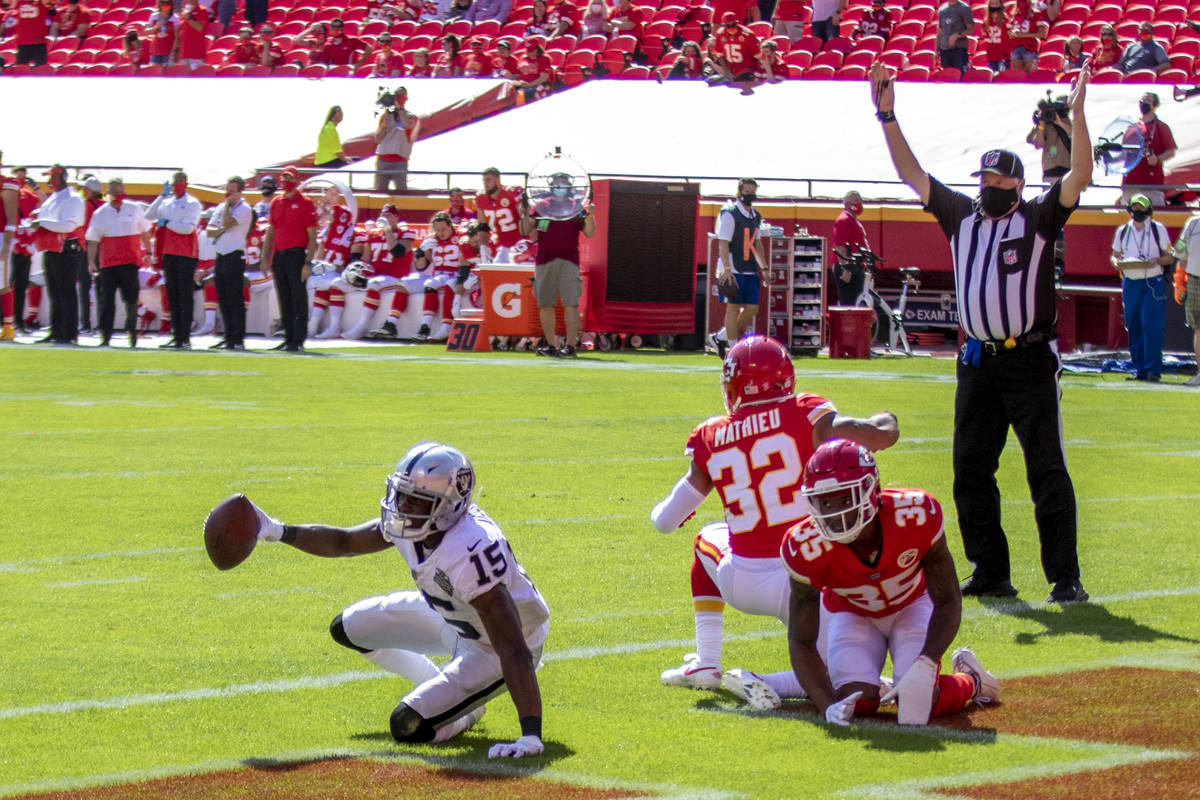 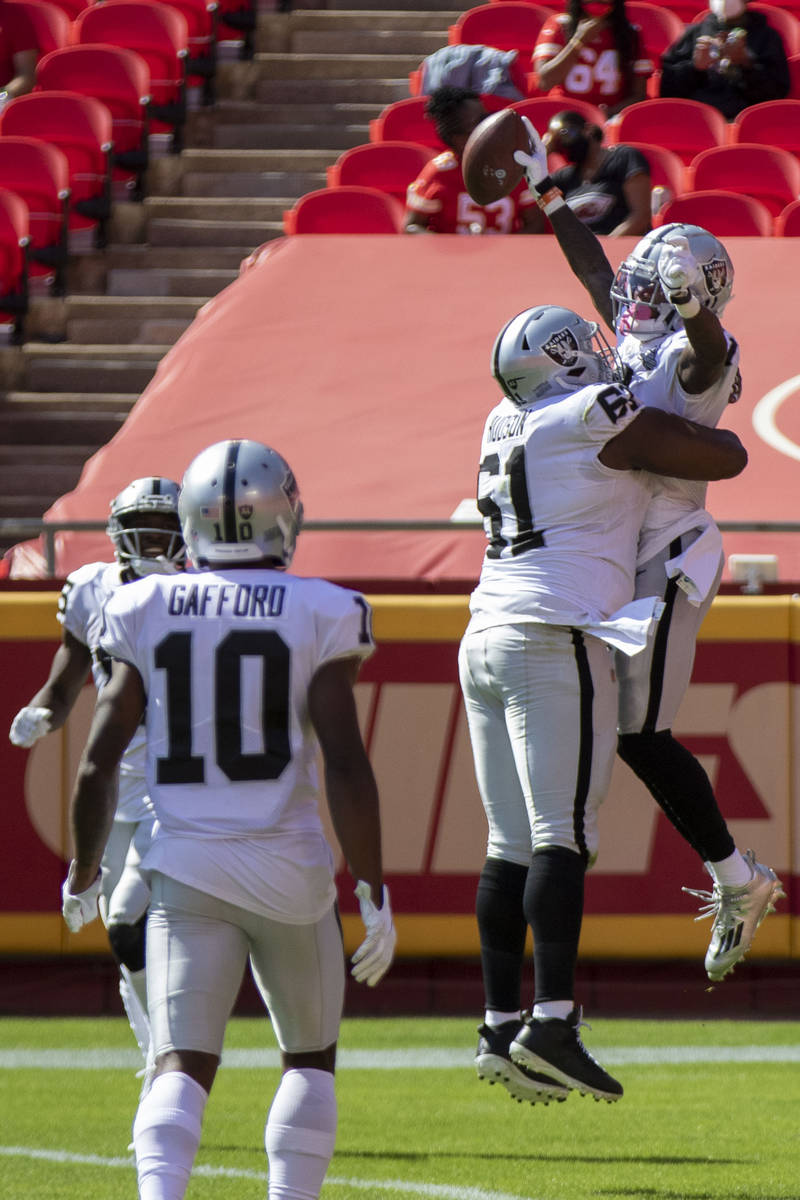 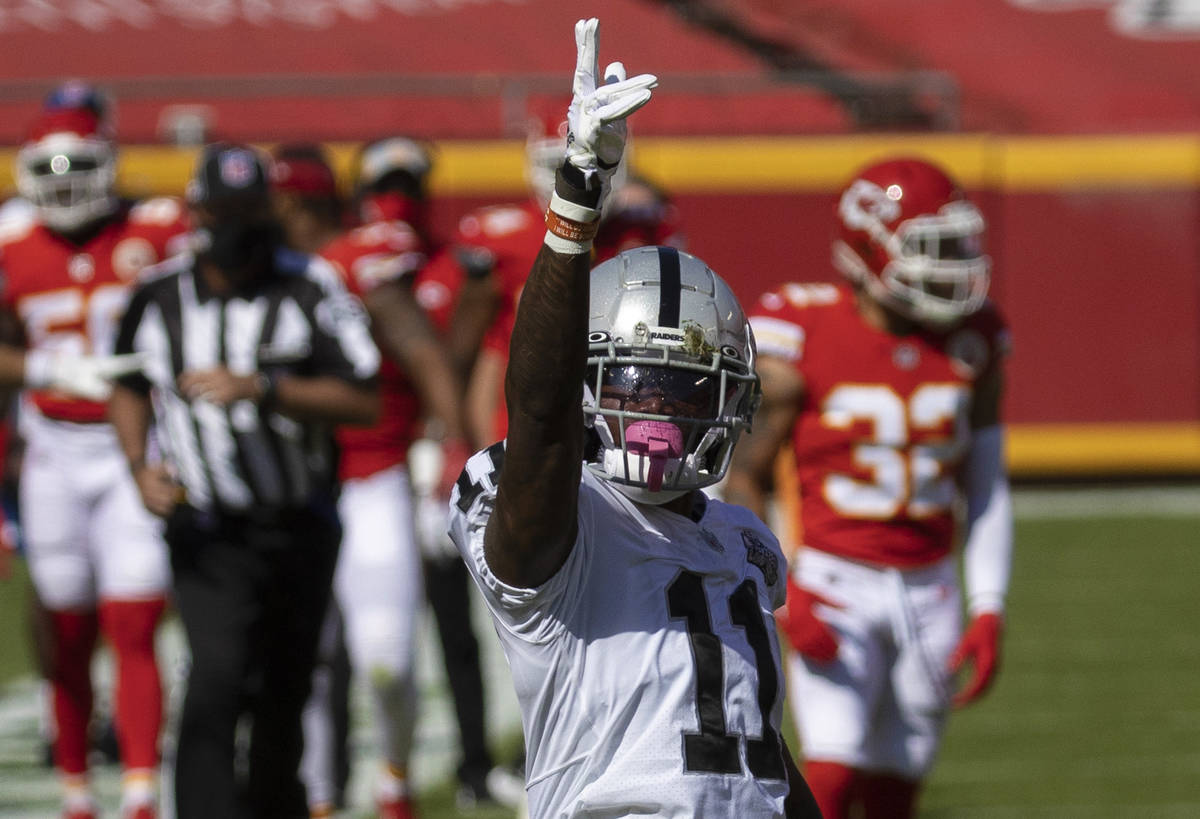 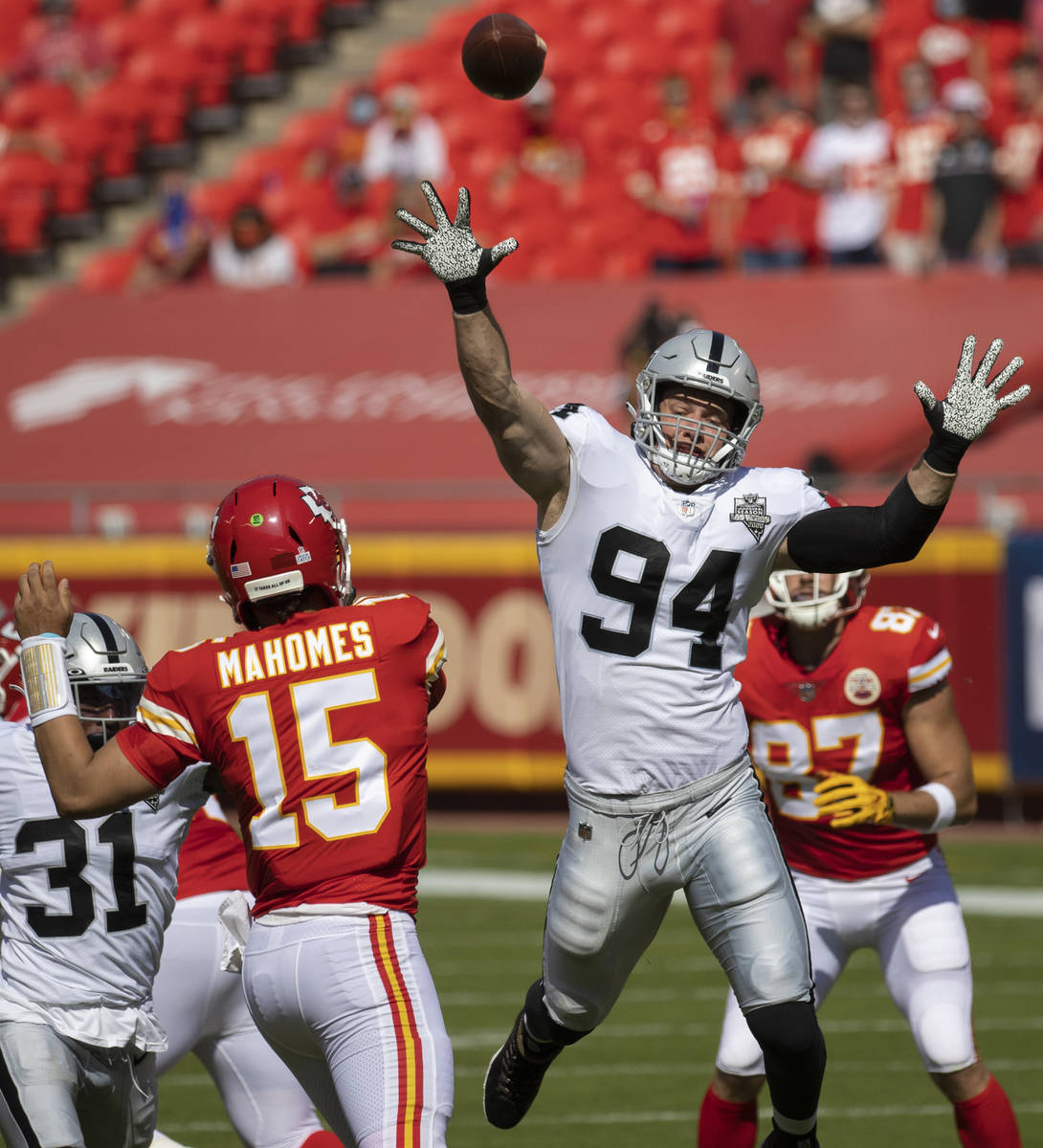 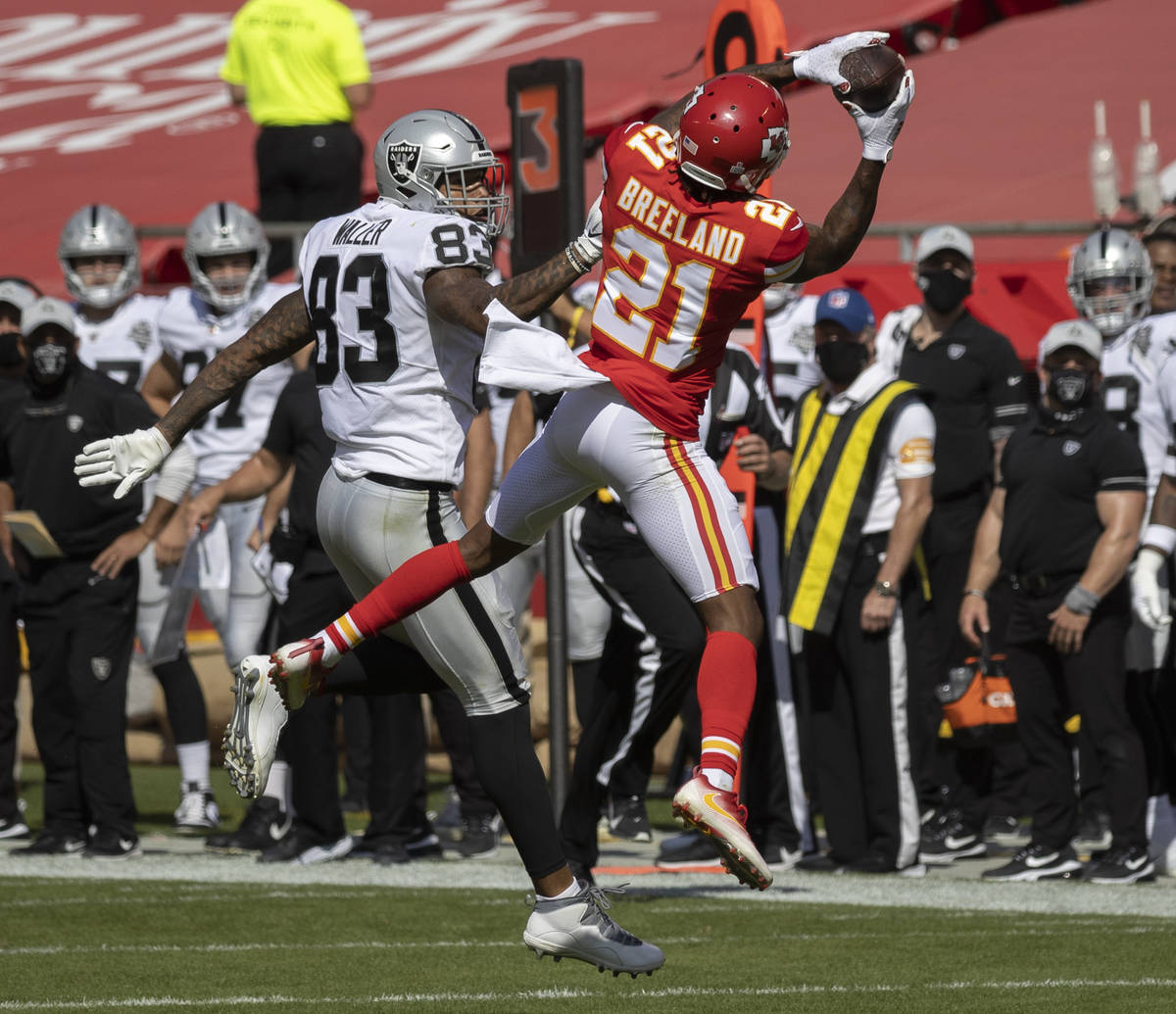 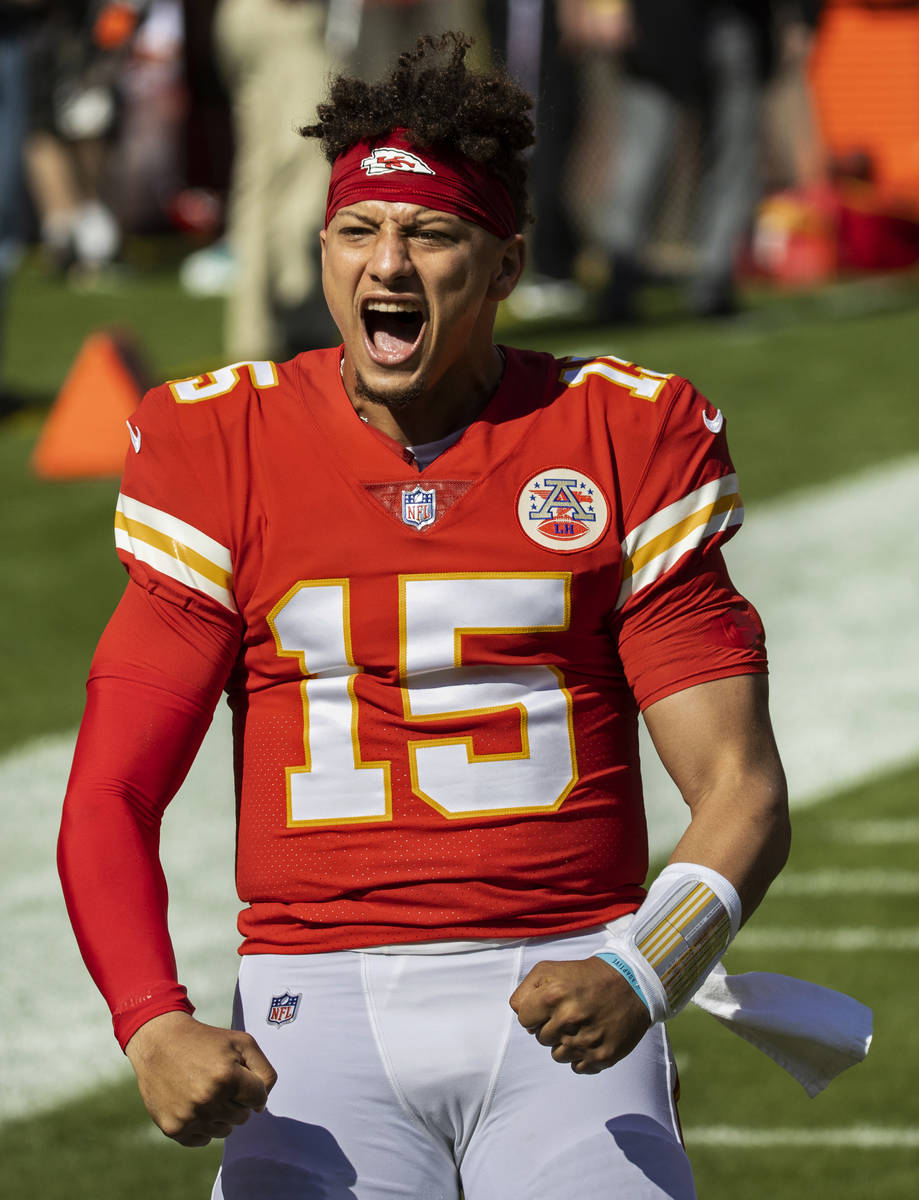 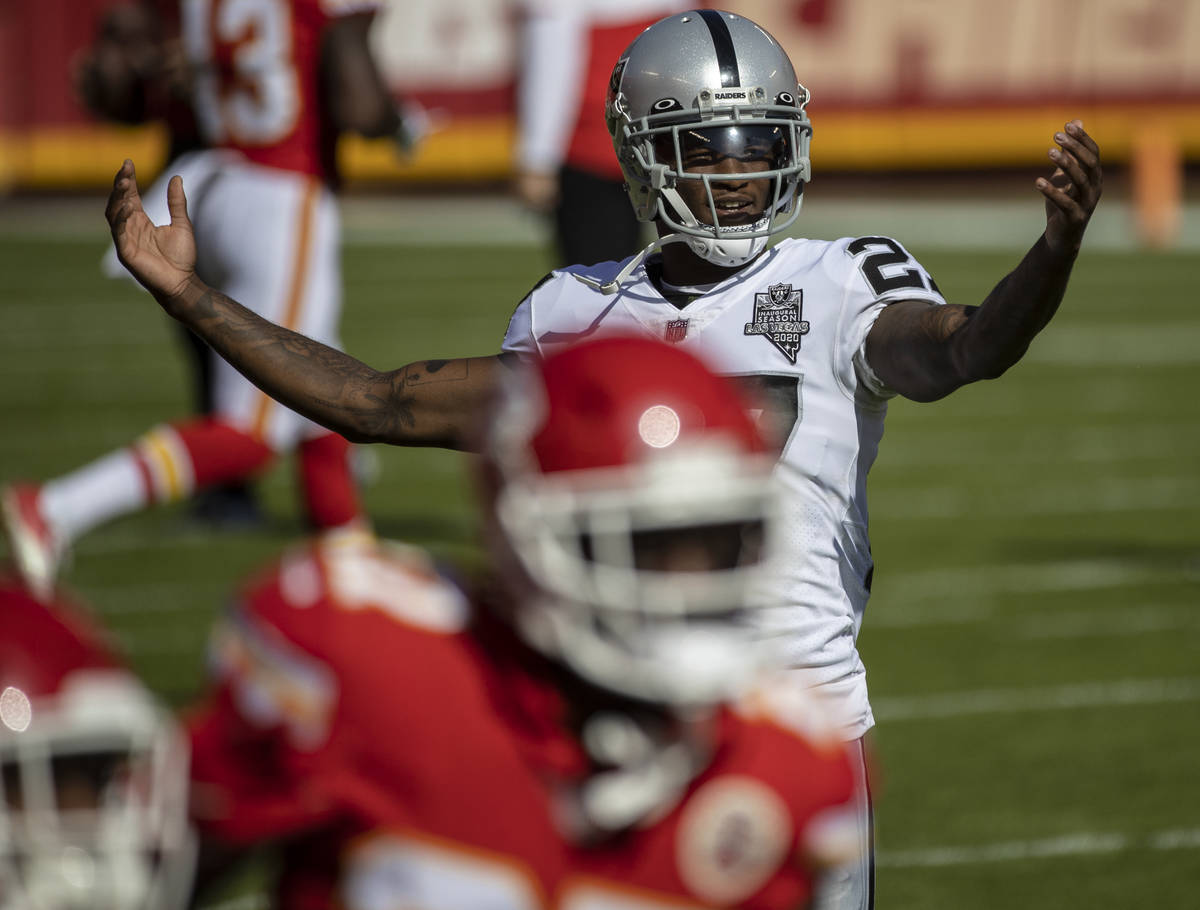 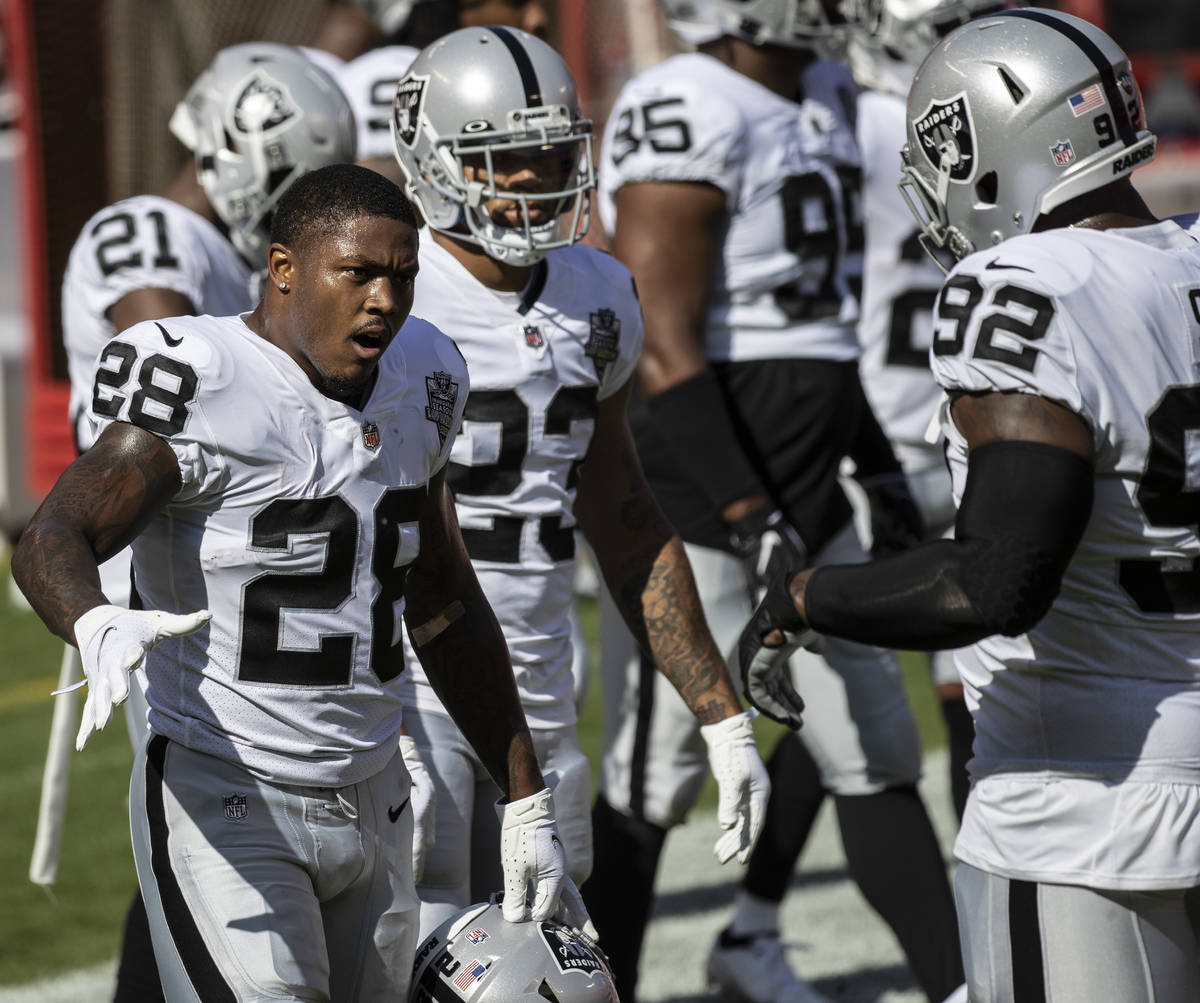 Las Vegas Raiders running back Josh Jacobs (28) fires up his team during warm ups before the start of an NFL football game with the Kansas City Chiefs on Sunday, Oct. 11, 2020, at Arrowhead Stadium, in Kansas City, Mo. (Benjamin Hager/Las Vegas Review-Journal) @benjaminhphoto 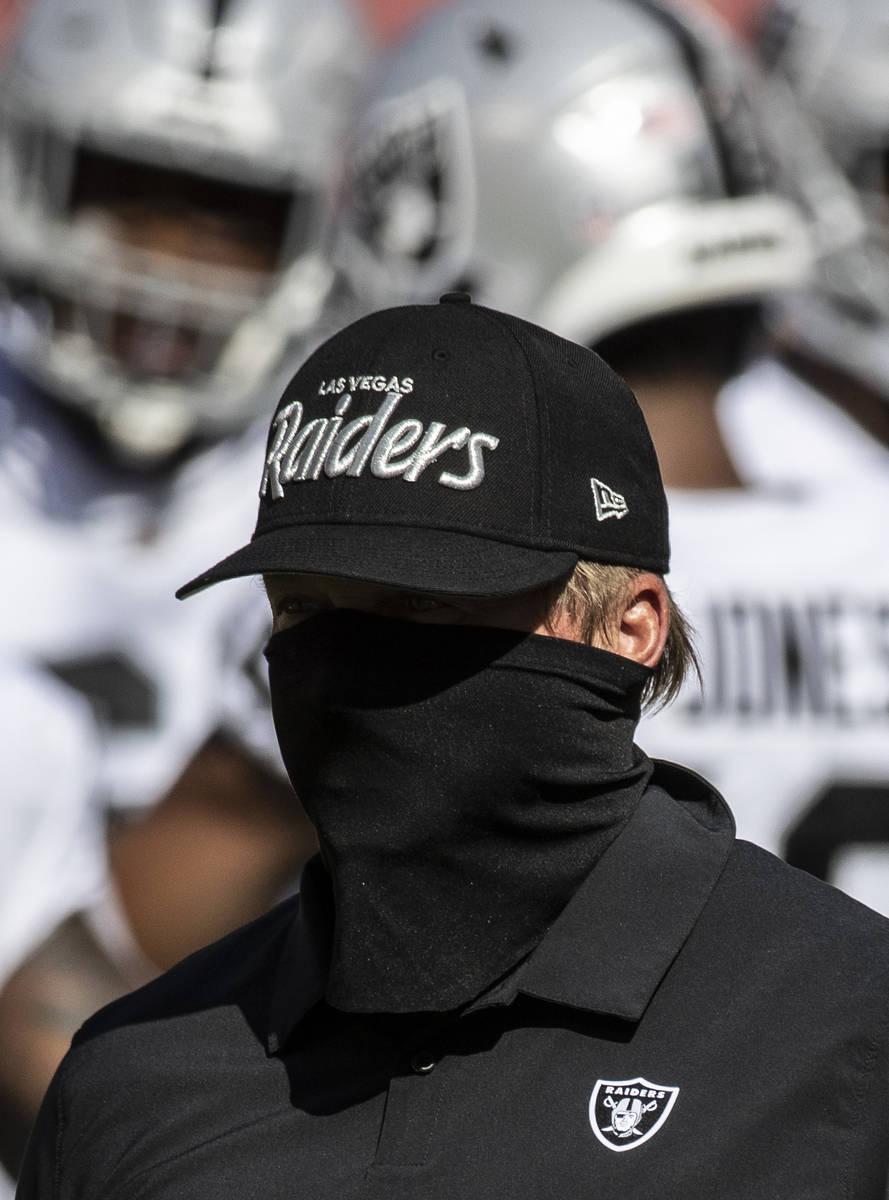 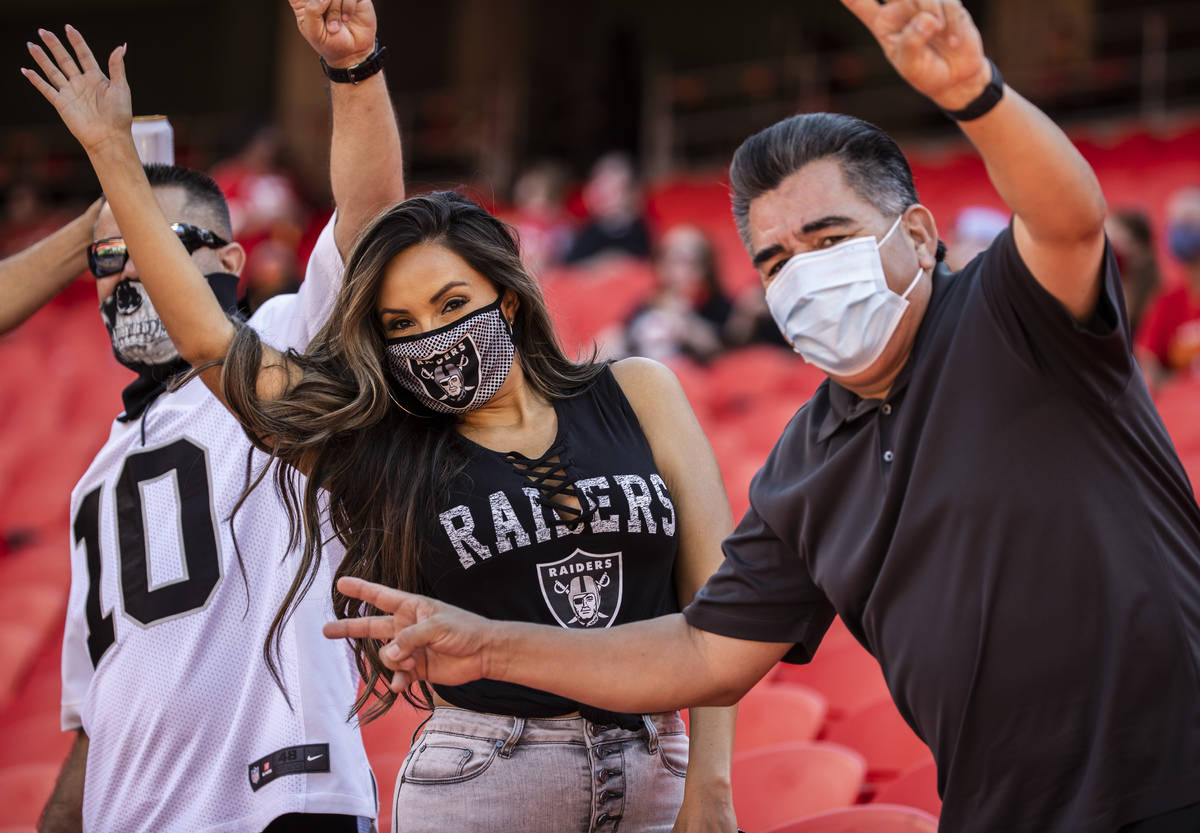 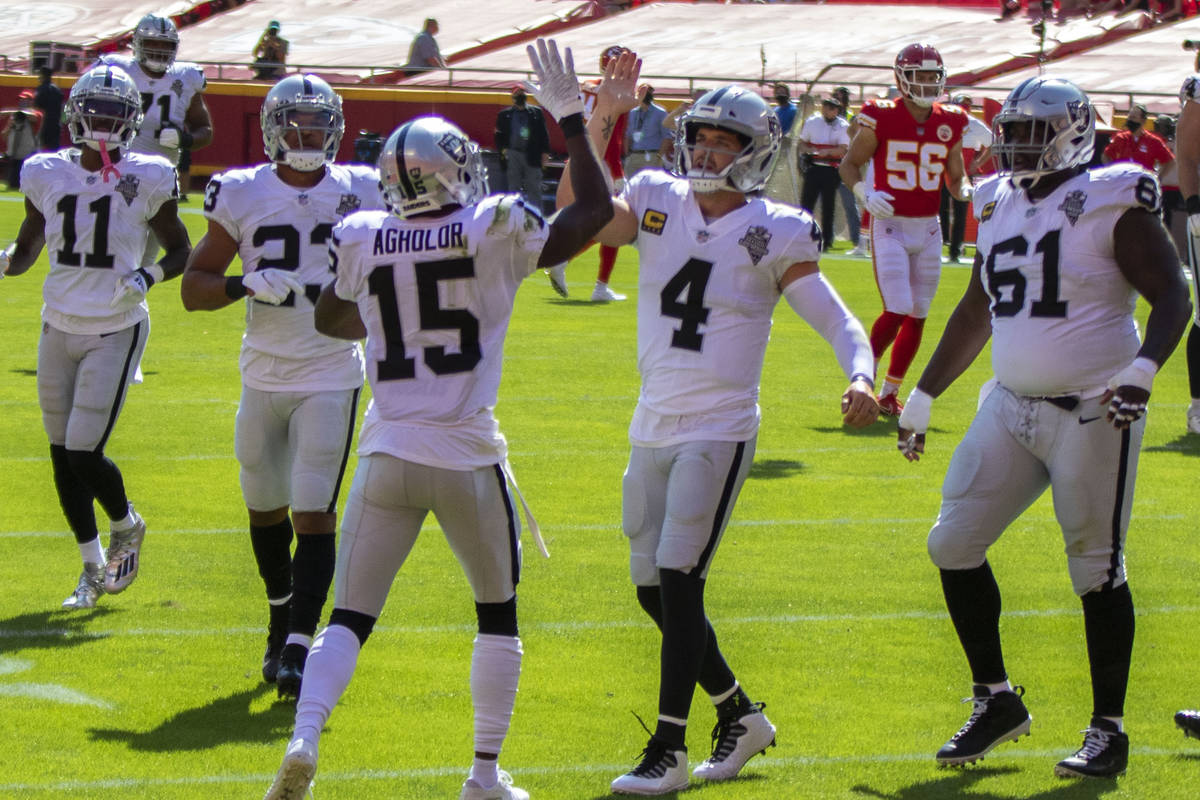 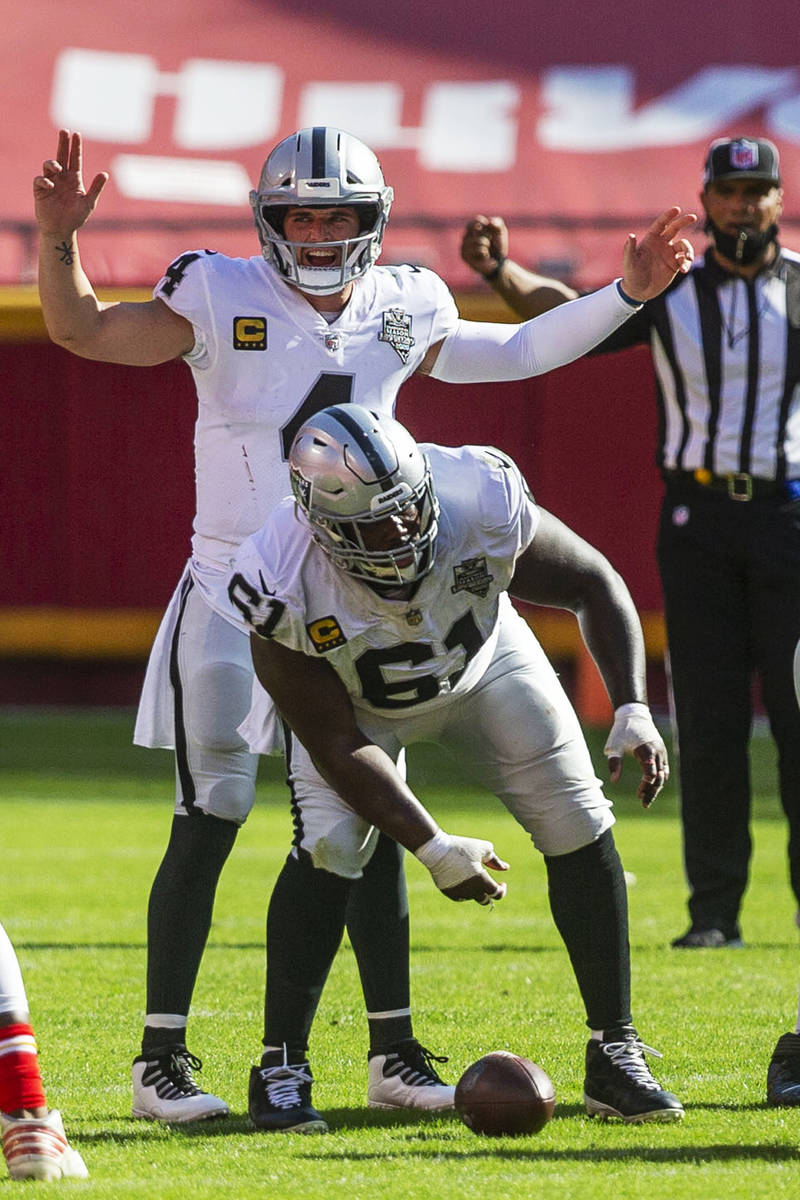 KANSAS CITY, Mo. — Needing one inch against the Kansas City Chiefs to finally exorcise major Arrowhead Stadium demons, the Raiders put it in the hands of Derek Carr on Sunday.

Given their quarterback’s well-chronicled struggles here, it was only fitting he’d get the call on the critical fourth down they faced at the Kansas City 44.

Carr responded by pushing the pile forward just far enough to convert the must-have first down and secure a 40-32 win over the defending Super Bowl champions.

While it was an early-season win, it sure seemed much more meaningful than that.

In six previous visits to Arrowhead Stadium, Carr had never won. To say many of those losses were of the ugly variety would be an understatement. This has been a house of horrors for him.

In fact, it had been seven long years since the Raiders won here, a painful reminder of how far their heated rivals had surged ahead of them in the hierarchy of the AFC West.

Given that the Raiders entered the game with a two-game losing streak while the Chiefs were on a 13-game winning streak, you would have been hard-pressed to find anyone who thought Sunday would be the day the Raiders finally took down their nemesis.

“I don’t think anybody really thought we were going to go out there and win,” said Maxx Crosby, who notched his fourth sack of the season.

But that is exactly what happened when Carr pushed forward for the first down. That quarterback sneak completed a memorable win that saw the Raiders came back from a 14-3 deficit because of Carr’s 347 yards passing and three touchdowns, the 118-yard, one-touchdown coming out party of rookie Henry Ruggs and a defense that rallied in the second half to hold Patrick Mahomes and the Chiefs to just a single fourth-quarter touchdown.

For a young team still grappling to find an identity and a winning edge, it doesn’t just send them soaring into the bye week with a stable 3-2 record. It is proof of what is possible by avoiding the costly penalties and mistakes that plagued them the past two weeks.

“This is the first time I feel like all year that we played a complete game together,” said Josh Jacobs, who had 77 yards rushing and two touchdowns on 23 carries. “It was a huge win for us.”

Because that wasn’t just any team the Raiders went toe-to-toe with and came out on top.

Carr was front and center throughout, providing a much-needed calming presence through critical moments but also the swift kick when the Raiders needed it.

The Ruggs touchdown throw was one of a handful of big plays Carr delivered. Among the others was a third-and-four toss to Darren Waller late in the third quarter that went for 23 yards to set up the Raiders at the Chiefs 25, and a fourth-and-one sneak a few players later to give the Raiders a first down at the Kansas City 14.

The first down sneak set up a seven-yard touchdown run by Jacobs to put the Raiders up 30-24.

The biggest, perhaps, was when the Raiders faced third and 18 at their own 22-yard-line clinging to a six-point lead with just over 10 minutes left. The game was ripe for a takeover by Mahomes, who was lurking on the other sideline. Instead, Carr found Hunter Renfrow for 42 yards to the Chiefs 36-yard line to set up Daniel Carlson’s 43-yard field goal to put the Raiders up 33-24.

Three plays later, Raiders safety Jeff Heath intercepted a fourth-down heave by Mahomes and took it to the Chiefs 2-yard line. Jacobs took it in from there, and the Raiders led 40-24.

In a stadium for which only crushing memories exist, Carr rose to the challenge and carried his young teammates to a big win.

“I give Derek a lot of credit, he’s been through a lot here as a Raider,” Raiders coach Jon Gruden said. “This is certainly a big win for him,”

As Carr left the field, he thought about all those long lonely walks he’s made back to the locker room at Arrowhead Stadium after a defeat.

“But not this time,” Carr said with a smile.