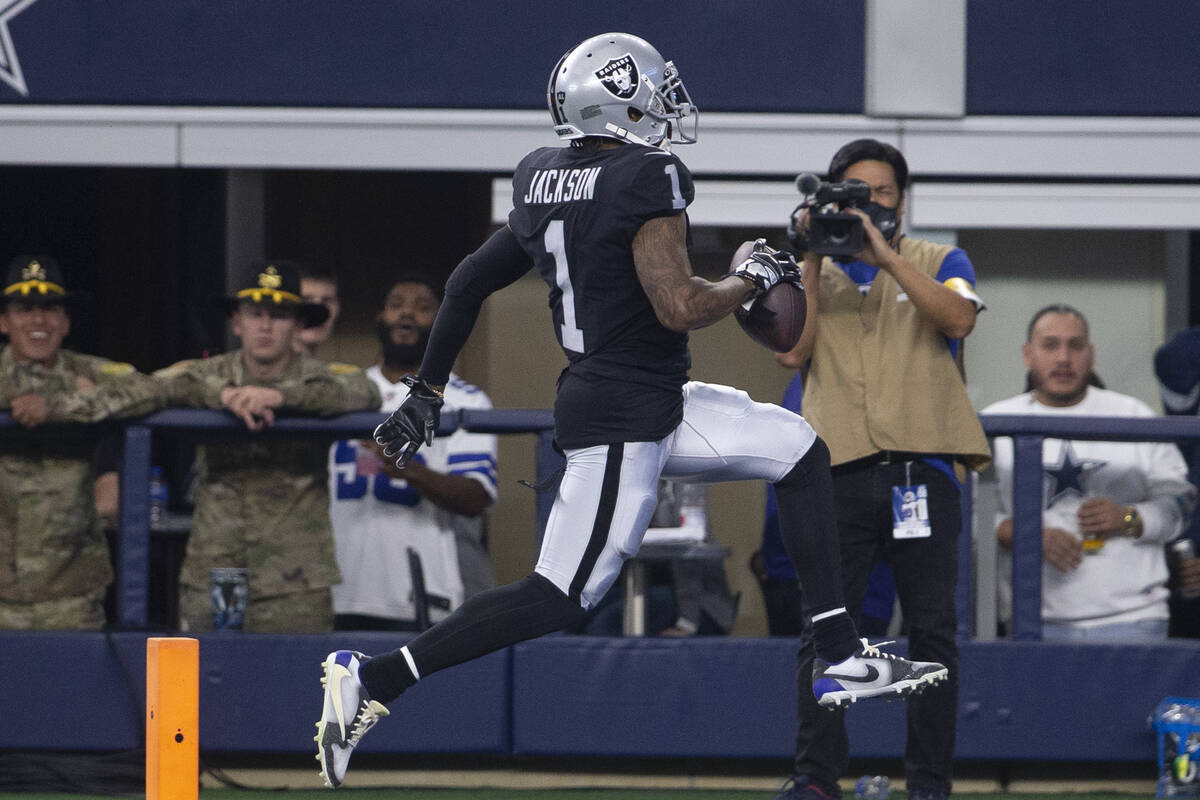 Raiders wide receiver DeSean Jackson (1) runs in for a touchdown during the first quarter of an NFL football game against the Dallas Cowboys on Thursday, Nov. 25, 2021, at AT&T Stadium in Arlington, Texas. (Heidi Fang/Las Vegas Review-Journal) @HeidiFang 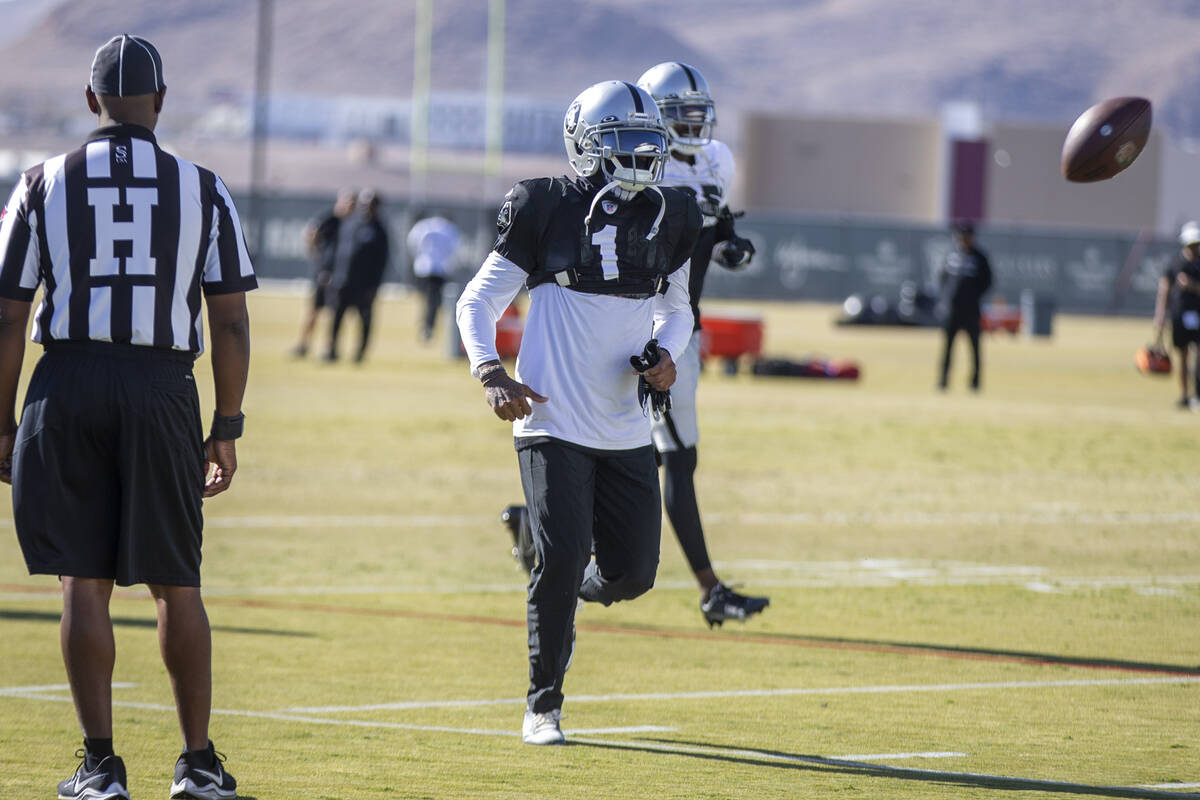 During a walk-through ahead of the Raiders’ Thanksgiving Day game against the Dallas Cowboys, Derek Carr pulled wide receiver DeSean Jackson aside for a bit of a skull session.

Three weeks into his Raiders career, Jackson’s command of a new playbook was growing. And there was an emerging sense that the route concept work he was doing behind the scenes with wide receiver coach Edgar Bennett and offensive coordinator Greg Olson had created a chemistry breakthrough between Jackson and Carr.

“Where Derek knew that he could be there when he was supposed to be there,” said Raiders interim head coach Rich Bisaccia.

Hence, Carr pulled Jackson aside to make sure he and the 35-year-old speedster were on the same page on how to attack a defensive look they fully expected to see from the Cowboys.

Sure enough, on the game’s third play, the Cowboys flashed the look that Carr and Jackson had discussed.

What happened next reflects how comfortable Jackson is feeling in Las Vegas and the confidence Carr now has in him.

Carr almost had to fight himself not to call for the snap too quickly. It was obvious as he got his footwork in order upon receiving the snap where he was going with the ball. The key, of course, is Jackson saw what Carr did and executed his assignment perfectly.

Just as Carr knew he would.

“You saw me, I stepped up and everyone was like he was throwing it to him the whole way,” Carr said. “I was like, yeah, because we got the look, and it’s exactly what I wanted, and I knew he was going to do exactly what I asked.”

The result was a 56-yard touchdown throw in which Jackson blew past the Cowboys’ defense before dancing up the sideline into the end zone.

It was more than just a scoring play, though, especially for a couple of veterans who have a combined 247 touchdowns throughout their careers.

It was an icebreaker of sorts for a Raiders team that couldn’t get out of its own way during a three-game losing streak in which they continually shot themselves in the foot with careless penalties and sloppy execution.

“When you connect on one, it just gives confidence to the whole team that, OK, here we go. We’re executing again,” Carr said.

The Raiders ended up beating the Cowboys 36-33 in overtime to snap the three-game losing streak and vault themselves back into the playoff race. More importantly, their offense got back on track by rolling up 509 yards, including 373 yards through the air behind Jackson’s three catches for 102 yards and Hunter Renfrow’s eight catches for 134 yards.

Jackson’s emergence was the key to it all, as it re-introduced the long ball to the Raiders’ arsenal after they struggled in that area after the loss of speedy wide receiver Henry Ruggs.

Jackson was signed a week after the release of Ruggs and had just one catch for 38 yards in his first two games. The lack of production was twofold. First, he only played 25 snaps in the two contests while working to get acclimated to his new surroundings.

Second, while he was the designated target on a handful of the plays, the NFL isn’t back-yard football where the quarterback just chucks it up to someone. It’s a bit more nuanced than all that.

Jackson’s 41 snap counts against the Cowboys were nearly double that of his first two games with the Raiders. As a result, there were many more chances for the Raiders to get the right looks on plays in which Jackson was the primary target.

“He was on the field more. He had more opportunities,” Carr said. “When his number was called, and they were playing a certain coverage it was, OK, well, yeah. that’s where the ball is gonna go.”