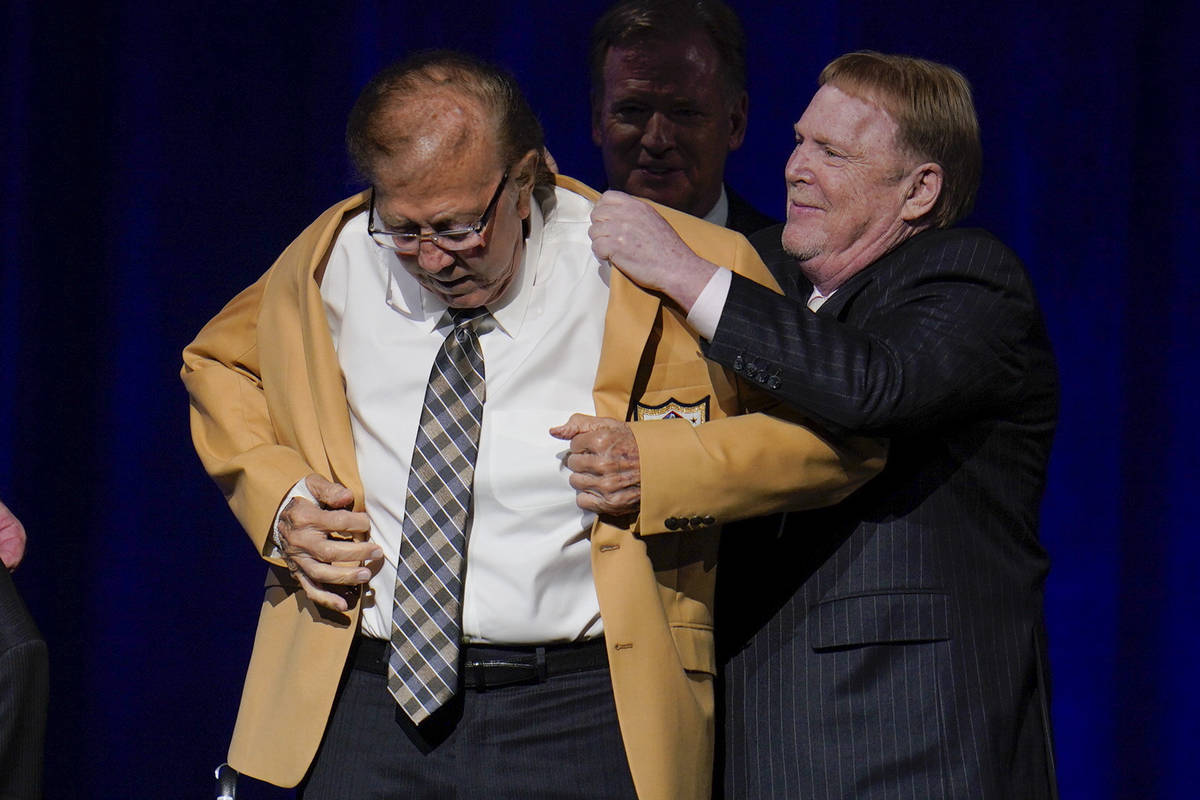 Before being named a member of the 2021 Pro Football Hall of Fame class, former Raiders coach Tom Flores already occupied a special place in the history of the NFL.

Flores, the longtime player, coach and front-office executive, will be inducted into the hall on Sunday in Canton, Ohio. With him will be his family and members of the Raiders, including Mark Davis, whose father, Al Davis, hired Flores to be the Raiders coach in 1979.

That hire made Flores the NFL’s first Hispanic head coach, a distinction that will remain an important part of his legacy. While Flores is aware of the groundbreaking nature of his NFL career — he was also the league’s first Hispanic quarterback — it is the work itself that has always taken precedence with him.

Going all the way back to Sanger Union High School in central California to Fresno City College to the University of Pacific all the way to the top of his profession in the NFL, it was the work that always drove him.

Even as he carried a torch for minorities across the country.

It is a message he continues to spread.

“It doesn’t matter what color you are, you’ve got to be ready to perform. And you’ve got to be able to win. Otherwise, you’re going to be an unemployed,” Flores said. “Fortunately, I was lucky enough, worthy enough and good enough, I guess, to win enough and establish myself.”

Nevertheless, it took someone with the courage to buck conventional wisdom to hire Flores as a head coach. That man was Al Davis, who was seeking a new leader upon John Madden’s retirement after the 1978 season.

“That’s Tom Flores in a Hall of Fame jacket!!”

For Flores, who was a Raiders assistant coach the previous seven years, it was an opportunity he’d been waiting nearly a decade to pursue. It was an ambition that he often shared with Raiders offensive lineman Art Shell.

The relationship between Flores and Davis dated all the way back to their time together in the AFL. After a whirlwind hiring process in which Davis would interview Flores five times, Davis ultimately tabbed him to replace Madden.

Flores’ familiarity with Davis — and Davis’ with Flores — would be one of the keys to their success together. The quiet, introspective Flores was the complete opposite of the combustible and demonstrative Madden. Initially, Flores worried their differences could be an issue.

“I am what I am,” Flores said. “I was that way as a player. As a person, I was quiet, under control. I remember talking to Al Davis and I said: “I’m not John, as far as the emotional part. And he said “I know. But I hired you to win.’”

In turn, Flores knew Davis so well he was able to always focus on the essence of him rather than the perception.

“He was tough. He was demanding. He was fearless,” Flores said. “You had to know him. And I got to know him pretty well. And once you knew him, you knew the good things and the bad things, and he had so many good things to offer.”

After going 9-7 in his first year at the helm, Flores and the Raiders soared to an 11-5 record in 1980 and a Super Bowl championship. Three years later, with the team now in Los Angeles, the Raiders won Super Bowl XVIII.

“His time came, he took the mantle and he ran with it,” Shell said. “So that was great.”

Flores ultimately ran all the way to the Pro Football Hall of Fame. And on Sunday, his bust will join the immortals of his profession.