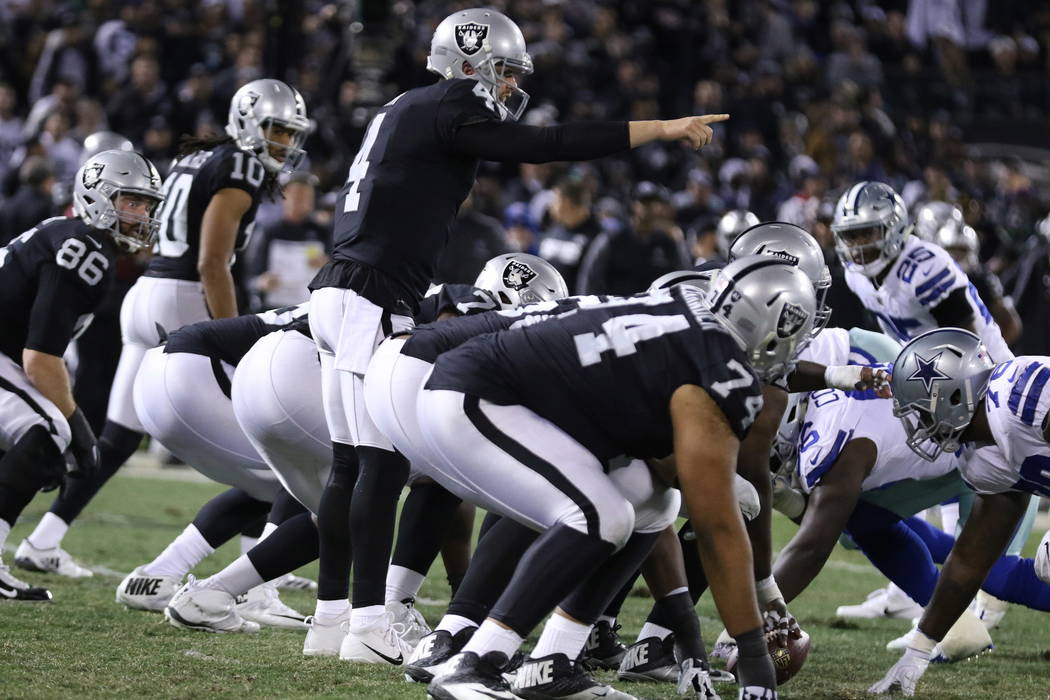 Oakland Raiders quarterback Derek Carr (4) calls a play at the line of scrimmage during the first half of a NFL game against the Dallas Cowboys in Oakland, Calif., Sunday, Dec. 17, 2017. Heidi Fang Las Vegas Review-Journal @HeidiFang

How the Raiders performed in a 20-17 loss to the Dallas Cowboys.

It’s true that quarterback Derek Carr rallied the Raiders to the point of being a play away from winning, but you can’t wait until the second quarter to gain a first down and get shut out in the first half and deserve any higher mark. Carr threw two second-half scores to Michael Crabtree, but his fumble out of the end zone resulted in a touchback and ended the game. He again missed open receivers early, was fortunate one attempt wasn’t intercepted and yet also made key plays with his feet (four carries for 47 yards with a long of 32). Jared Cook took a bad offensive pass interference call while the tight end was grabbing a would-be score.

The Raiders might have been gashed between tackles early and often, but the halftime deficit of 10-0 could have been much worse. Sean Smith had two interceptions — the first stalling Dallas’ opening drive deep in Raiders territory and the other leading to a Raiders field goal and a 10-10 score. Khalil Mack had five tackles, one for loss, and two sacks. But miscues also led to Dallas points, specifically when Smith was called for pass interference that gave the Cowboys first-and-goal from the 1. TJ Carrie also dropped a sure interception.

We’re not going full F because of the effort by Cordarrelle Patterson on kick returns, but his teammates didn’t hold up their end. One of the game’s biggest plays came on a fake punt by the Cowboys at their own 24 with under five minutes left in the third quarter. It extended a drive that finished with a Dallas touchdown and 17-10 lead. Patterson returned the second-half kickoff 100 yards for a score, but that was nullified on a hold by Xavier Woodson-Lester. The Raiders could have grabbed some momentum entering halftime, but placekicker Giorgio Tavecchio was wide left from 39 yards.

I’m not sure the Raiders followed head coach Jack Del Rio’s mantra this week of letting things rip — they certainly didn’t over the first half. And while they might have gone boldly into the night with their second-half effort, they also did so making far too many mistakes in all phases. Del Rio has already fired his defensive coordinator this season. It’s impossible to believe he won’t make more changes, no matter where the final record stands.