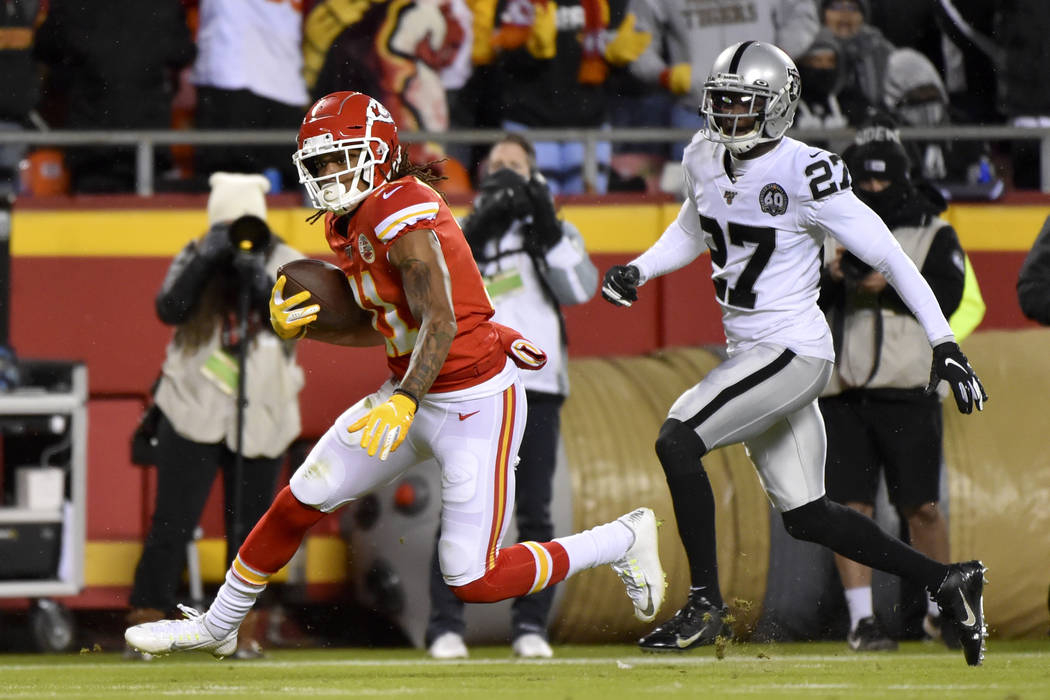 ALAMEDA, Calif. — Penalties and turnovers have plagued the Raiders this season — but never more than the last two games.

In Sunday’s 40-9 loss to Kansas City, Oakland was assessed 12 penalties for 99 yards and finished minus-3 in turnover margin. The Raiders weren’t flagged as many times against the Jets the week before, but they still finished with a pair of turnovers.

Head coach Jon Gruden shouldered the blame for the penalties and turnovers in his Monday press conference.

“I’ve got to do a much better job,” Gruden said.

The Raiders have continued to address the penalty issues, with Gruden saying the club went over it again on Monday. More than the fouls that occur between the whistles, Gruden emphasized that the Raiders must do better to get rid of the presnap and dead-ball penalties.

Of the Raiders 12 penalties for 99 yards — the Chiefs had no accepted penalties in the game — half were either before the snap or after the whistle. The Raiders had three neutral-zone infraction or offsides penalties, plus one false start on offense. Then there were a pair of unnecessary roughness penalties.

But even penalties within the confines of the play were significant. Cornerback Nevin Lawson committed a defensive holding foul on third-and-11 that gave the Chiefs a first down, extending a drive that finished in a touchdown a couple plays later. Rookie Trayvon Mullen had what initially looked like an interception overturned when officials determined he committed pass interference upon reviewing the play.

Those are mistakes the Raiders must eliminate because they allow opponents more opportunities to score.

“The hidden yardage — that’s a huge statistic,” Gruden said. “And it’s one that we’re not good enough to overcome.”

Offensive penalties have also knocked the Raiders off course — like tight end Darren Waller’s offensive pass interference foul put Oakland behind the chains at first-and-20. Based on how the Raiders are constructed offensively, that’s hard for the club to overcome, as evidenced by the team not scoring a touchdown against the Chiefs until there were just 39 seconds on the clock.

“We’ve said it time and time again, for us to be good on offense right now, we’re going to have to stay on schedule and be balanced,” Gruden said. “The penalties, the turnovers, dropped passes, miscues have hurt us. And it’s been a big factor, I think, in the last couple weeks. But, again, that’s something I’ve got to do a much better job of. I’m the man calling the plays.”

As the final quarter of the 2019 regular season begins, the Raiders are 6-6 and still in the hunt for a playoff spot. But Gruden said on Monday that the Raiders aren’t focused on the proverbial “P” word. Instead, he said they will worry about what they can control.

“We’re going to focus on the Titans. We can’t control what’s going on in the league — who’s playing who and what the scores are in other places,” he said of Sunday’s opponent at Oakland-Alameda Coliseum. “We’ve got to control the things we can control, and that’s minimizing presnap penalties, eliminating after-the-whistle penalties and winning the turnover battle.”

“We’d love to make the playoffs, would love to win a championship — but that’s out of our control right now,” Gruden added.

This Raiders team faced a pair of big losses earlier this season and responded well. Gruden said he’s confident the team is primed to do the same with just four games remaining.

“I have no doubt we’re going to respond,” Gruden said. “We have some really good veteran leadership, some emerging young players. We’ve just got to collectively play together as a team — and that falls on me.”