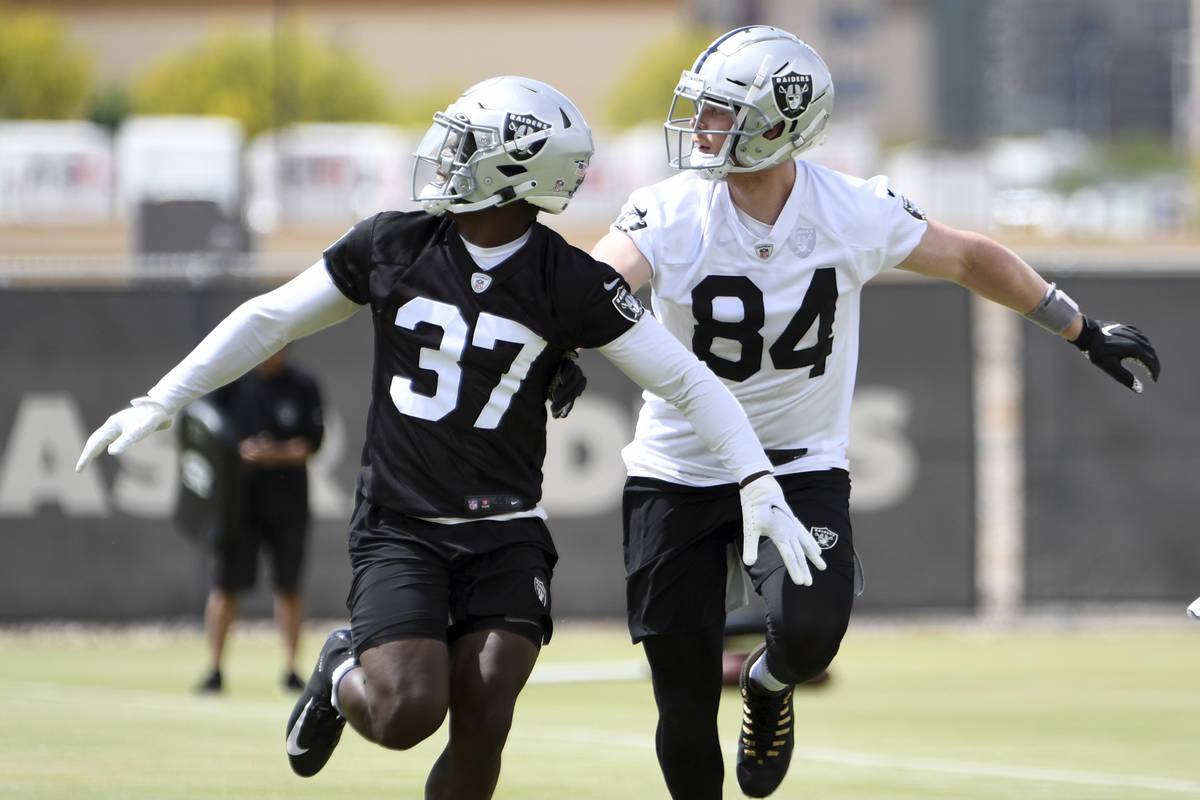 The Raiders wrapped up the first week of organized team activities Thursday. After taking the weekend off, they will return to Henderson for another slew of workouts at the club’s practice facility.

As the offseason program continues to unfold and training camp creeps closer, fans have plenty of questions about the Raiders’ development.

Here is a sampling of this week’s mailbag:

elliot edelstein (@elliot_elraid66): How does the tandem of Henry Ruggs and Bryan Edwards look?

Vincent Bonsignore: Obviously, it’s very, very early. But both looked to be in great shape. Ruggs was noticeably bigger in a good way. The Raiders stressed nutrition and weight room work for Ruggs this offseason, and he clearly took it to heart.

The next step is making the necessary refinements to enhance his route running, coming down cleanly with the ball — including getting both feet down — and playing with more confidence and explosiveness.

Edwards has looked the part of an NFL receiver from day one of training camp last year, and he looked polished and effective throughout his first camp. An ankle injury in Week 3 last season set him back, but he finished the season strong. He looked good last week during OTAs.

The Raiders would like nothing more than for both young wide receivers to earn bigger roles.

Jesus Jimenez (@86Chuy68): If Johnathan Abram doesn’t take the next step, do you see any of the recent drafts picks pushing him out?

VB: This is a big season for the third-year safety for several reasons. As a first-round pick in 2019, his fifth-year option season is closer than you think. The Raiders need assurances he is worthy of picking up that option. Delivering a big season this year would go a long way toward creating that comfort level.

The Raiders, cognizant of that looming decision, added safeties Trevon Moehrig and Tyler Gillespie via the draft. Moehrig is expected to be the starter at free safety, with Abram playing the box safety position in new defensive coordinator Gus Bradley’s system. So Moehrig actually complements Abram rather than threatens him.

On the other hand, Gillespie projects as a box safety as well. While the initial plan will be to slowly bring him along in the hope he can contribute situationally, it isn’t far-fetched to assume he could be the replacement for Abram.

Ideally, Abram takes a decisive step forward and solidifies his long-range spot on the team, and Gillespie, Moehrig, and veteran Karl Joseph complete a deep and versatile safety room.

But first and foremost, Abram has to show he can be counted on.

Zud (@LLAMA12345666): If you could pick one of our young players to break out and be a Pro Bowler this season, who would it be?

VB: This is a great question. Predicting a Pro Bowl candidate is tough because so much of that vote is predicated on reputation. Aside from Darren Waller, Derek Carr and Josh Jacobs, the recent resumes of all other current players don’t rise to that level.

More pertinently, the Raiders just need some of these young guys to show they can be counted on as reliable, consistent players.

Abram will be given every chance to tap into his skills in his new position as a physical presence operating in much smaller spaces while also getting dialed up in blitz packages. That could add up to the type of big plays the Raiders need.

Cory Littleton isn’t so much a breakout candidate as he is a candidate to get back on track and be the player he was with the Rams. If so, he’ll garner plenty of attention from voters.

VB: Definitely looks and acts the part of a highly touted prospect. Looking forward to seeing him when the lights get turned on a little brighter during the preseason.

TheRealOliverBeans (@oliver_beans): Is there going to be a concerted effort to get Henry Ruggs involved this year? His involvement last year was very disappointing and concerning.

VB: Yes, although it’s a two-way street. No doubt Jon Gruden and his staff need to figure out more ways to get him involved. He’s too good an athlete not to put the ball in his hands seven to 10 times per game, if not more.

However, he has some responsibility in showing Gruden and Derek Carr that he can deliver when called upon. The more he delivers, the more confidence the coaches and Carr will have in him.