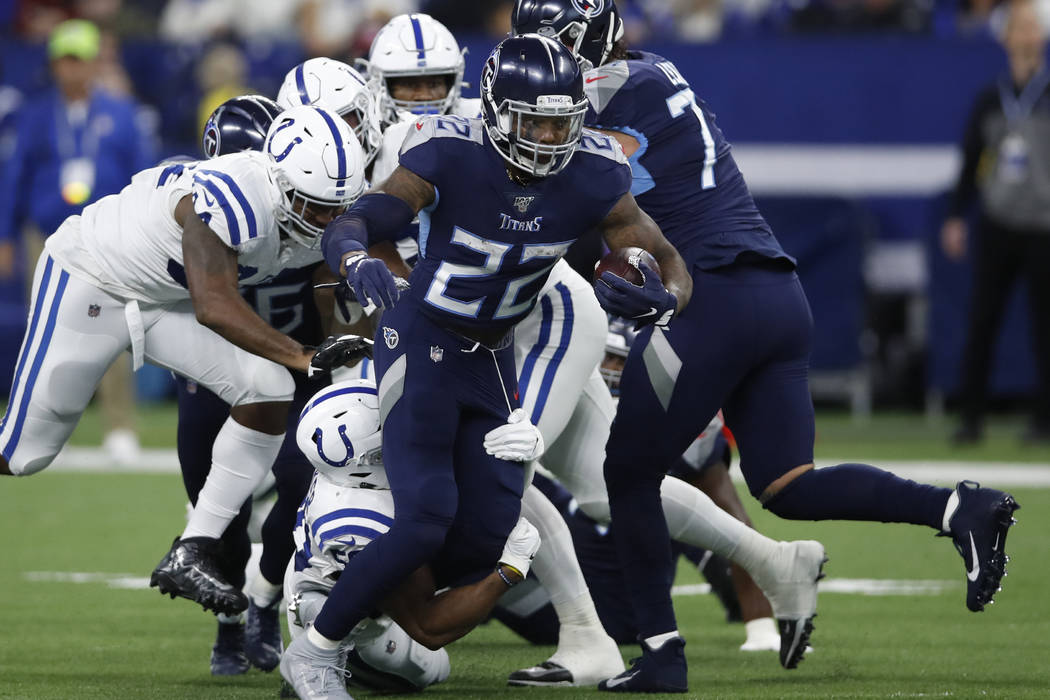 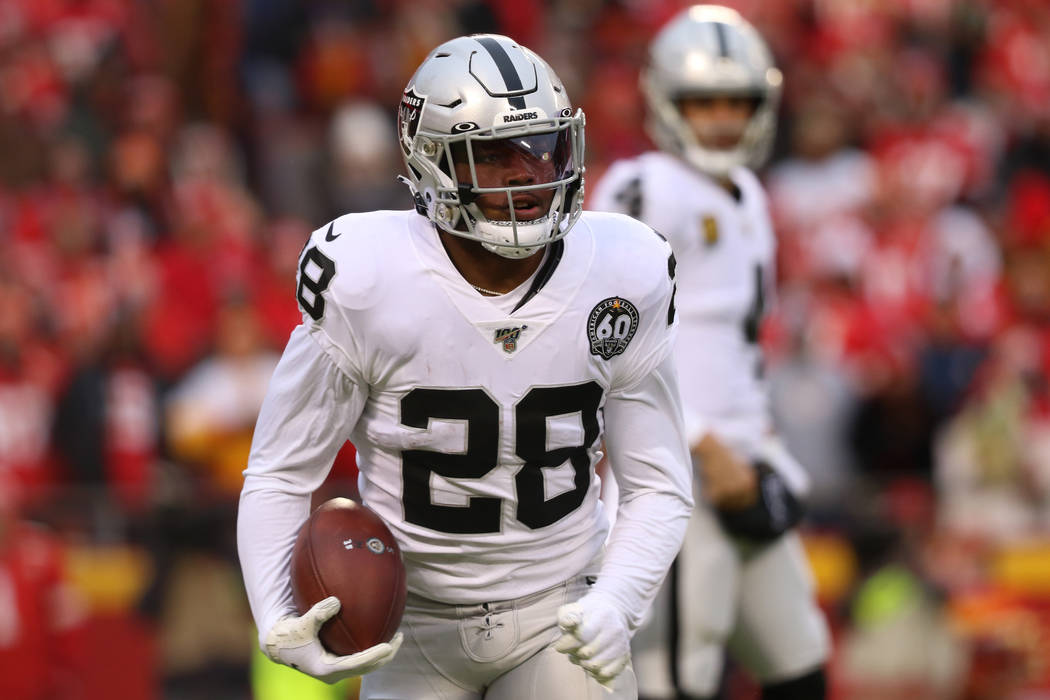 Oakland Raiders running back Josh Jacobs (28) holds on to the football after a run during the first half of an NFL game against the Kansas City Chiefs at Arrowhead Stadium in Kansas City, Mo., Sunday, Dec. 1, 2019. (Heidi Fang /Las Vegas Review-Journal) @HeidiFang

ALAMEDA, Calif. — Two of the NFL’s best running backs will be on display when the Titans visit the Raiders on Sunday.

Tennessee’s Derrick Henry is No. 3 with 1,140 yards rushing. Raiders rookie Josh Jacobs is No. 4 at 1,061. Both entered the league after starring at Alabama. Henry left the Crimson Tide after the 2015 season, and Jacobs arrived at Alabama in 2016.

Both have excelled despite nagging injuries.Henry has been nursing a hamstring injury for the last couple weeks — though it hasn’t seemed to hinder his performance. Jacobs has been playing with a shoulder injury since the Week 7 loss at Green Bay, which he revealed on social media this week has been “broken” since that game.

“The fact that he keeps suiting up and going out there and running — not only running, but running with the style that he runs with, I don’t think enough can be said about that guy,” Raiders quarterback Derek Carr said.

Jacobs didn’t practice Wednesday or Thursday, with offensive coordinator Greg Olson saying that the Raiders do have to manage his workload during the week to maximize his ability on game day.

“He’s been honest with us in terms of the injury,” Olson said. “And our training staff has done a great job, really, of making sure he’s ready to go on Sundays.”

While the Raiders (6-6) have lost their last two games, Henry has been a significant part of the Titans’ resurgence over their last six games. While quarterback Ryan Tannehill has provided a lift, Henry has rushed for 496 yards and five touchdowns over Tennessee’s last three games — an average of 165 yards per game. His last three totals have been 188, 159 and 149.

Henry has shown a tendency to get stronger as the season wears on, last year rushing for 238 and 170 yards in consecutive games in December. Raiders coach Jon Gruden said this week that the big back — listed at 6-foot-3 and 247 pounds — improves as he receives more carries.

“I think the secret sauce in Henry is … he does not get tired. He’s a machine, man,” Gruden said. “It’s an impressive human being.”

To successfully defend Henry, Raiders defensive coordinator Paul Guenther said, “first and foremost, you’ve got to be in the right position, play the blocks, and then when he gets through there, you’ve got to have 11 guys to the ball. He does a good job of trying to get extra yards, so we’ve got to get hats on him — wherever it is on his body — as he’s trying to get those extra yards.”

Jacobs, on the other hand, has rushed for at least 100 yards in a game five times, but the Raiders are 3-2 in those games. Last week, Jacobs ran 17 times for 104 yards but only three of those handoffs came in the second half, when the Raiders were so far behind in the 40-9 loss.

Still, Titans coach Mike Vrabel has been impressed with what he’s seen from Jacobs.