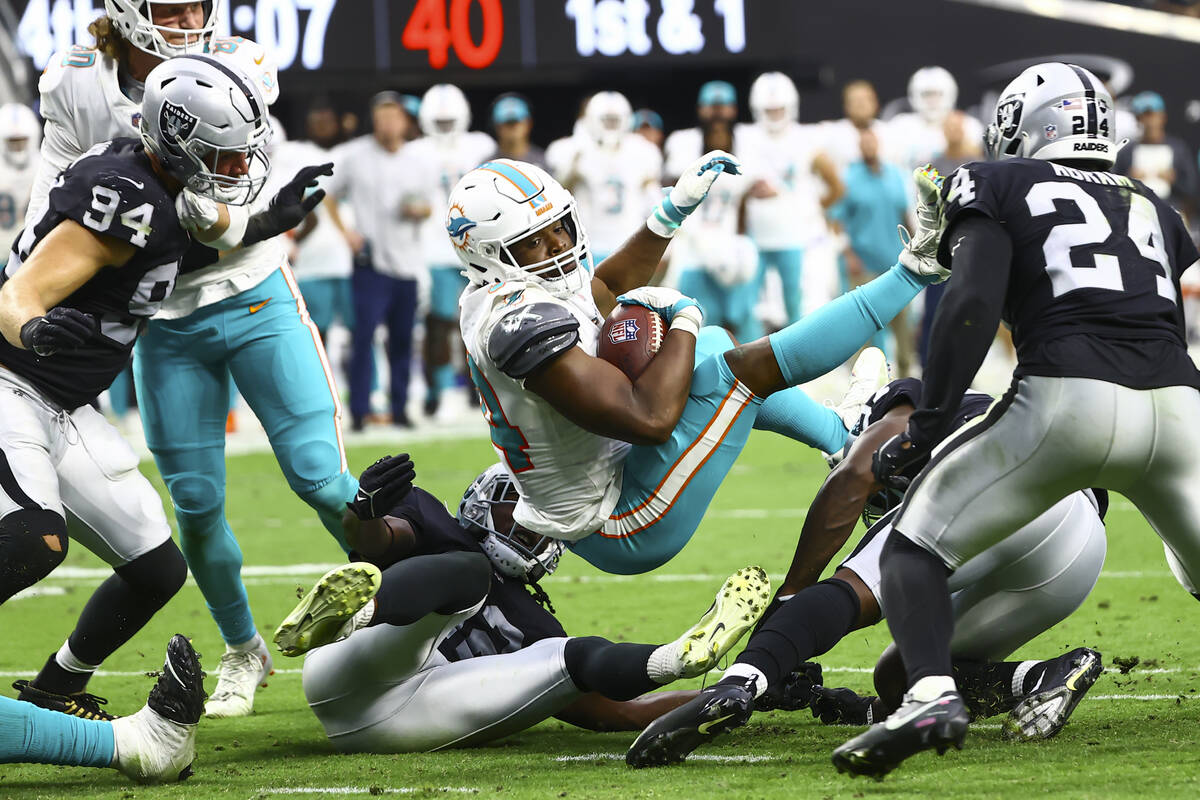 Miami Dolphins quarterback Jacoby Brissett (14) is stopped short at the end zone by the Raiders during the second half of an NFL game at Allegiant Stadium in Las Vegas on Sunday, Sept. 26, 2021. (Chase Stevens/Las Vegas Review-Journal) @csstevensphoto

Miami Dolphins quarterback Jacoby Brissett flashed a shy, modest smile after a 31-28 overtime loss to the Raiders on Sunday at Allegiant Stadium. He knew his pass to Jaylen Waddle in his own end zone was egregious — and he owned it.

“It just wasn’t a good play. It’s a dumb decision on my part,” Brissett said of the throw, which resulted in a safety late in the first quarter. “It’s a great learning experience in that situation.”

The 28-year-old proved a quick study.

Brissett atoned for his early mistake by rallying the Dolphins from an 11-point deficit in the fourth quarter of his first start this season. He extended plays with his legs so he could make plays with his arm, finishing with 215 passing yards, a rushing touchdown and three key fourth-down conversions.

One extended the drive on which Miami tied the game to force overtime. Another was the game-tying touchdown. The third and final fourth-down conversion covered 27 yards, turning an improbable fourth-and-20 into a positive play that preceded the game-tying field goal in overtime.

But Brissett lamented his mistakes rather than celebrate his success.

“We had our chances, obviously, and hats off to the (Raiders). They capitalized on some of our mistakes,” he said. “We took a step forward and got better. A lot of guys came up and made a lot of plays. We prepared well. Some of it showed. We obviously left a couple plays out there. I know I did personally.”

Brissett came off the bench last week, replacing Tua Tagovailoa, who was placed on injured reserve during the week with fractured ribs. He’s among the NFL’s most accomplished backup quarterbacks, having started 32 games in his first five seasons.

And he found a rhythm late after slogging through a slow start.

Miami’s defense helped spot Brissett a 14-0 lead before he fired the ill-advised pass to Waddle in the end zone. The Dolphins didn’t score on their next four drives, and a 14-0 lead turned into a 25-14 deficit with 6:05 to play.

But Brissett wouldn’t waver, powering an 11-play, 47-yard drive with a 19-yard scramble that set up a field goal. His next drive covered 82 yards in 13 plays, including a 15-yard strike to a slanting DeVante Parker on fourth-and-8 and a 1-yard touchdown run during which he juked Raiders linebacker Denzel Perryman.

Brissett then fired a dime to Will Fuller on the 2-point conversion to tie the game and force overtime.

“There was definitely a lull there in the middle of the game, second and third quarters,” Miami coach Brian Flores said. “And then he got a lot more comfortable as the game went on.”

The drive stalled after two errant deep incompletions, resulting in a tying field goal instead of a winning touchdown.

Gesicki praised his quarterback’s play, noting that “he did a great job fighting” down the stretch. And so did the man who tackled Waddle in the end zone.

“He’s a guy that can throw the ball. He’s a guy that has veteran presence,” Raiders cornerback Casey Hayward said. “I think early on, we had him rattled a little bit. But in the fourth quarter, he kind of settled in.”