Raiders defensive coordinator Paul Guenther and defensive tackle Maurice Hurst said Friday that they have to be ready on all levels to face the Saints and their potent offense in Week 2 on Monday Night Football. (Heidi Fang/Las Vegas Review-Journal) 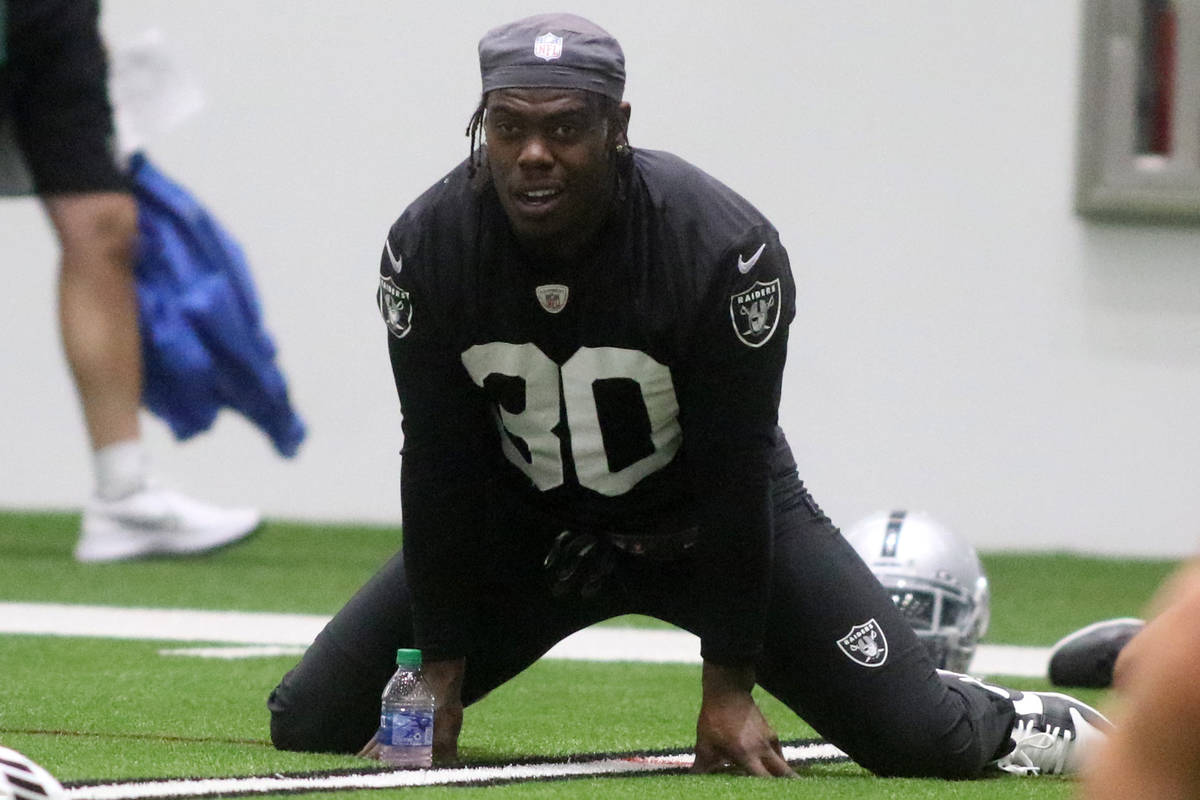 He received a handoff from quarterback Derek Carr during his pro debut on Sept. 11, 2016, wiggled through a crease at the line of scrimmage and sprinted 75 yards into the end zone against the New Orleans Saints, whom he’ll play again Monday at Allegiant Stadium.

“I wrote my name in the record books when I did that…but that’s all the way in the past,” Richard said. “They’re a great team. A team that’s been playing together for a while. … We definitely feel like a win here would give us the confidence and the jump-start we need to continue our mission to make it to the Super Bowl.”

Richard is one of four Raiders who played against the Saints in 2016, joining Carr and offensive linemen Rodney Hudson and Gabe Jackson. The 26-year-old plays a secondary role to Josh Jacobs, but is grateful nonetheless to be with the team and face New Orleans again.

“It just allows me to not take this for granted,” Richard said. “I’ve just been blessed to be on this team for five years. … I enjoy what I do. I come in every day and just work. I know the other four guys, they do the same.”

Richard, 26, signed with the Raiders in 2016 as an undrafted free agent out of Southern Mississippi and has played in all 16 games the last four years. He embraces his role as scat back and has proven to be a reliable pass catcher, logging 161 receptions for 1,395 yards — including 68 catches for 607 yards in 2018.

Jacobs said this summer that he wanted to catch at least 60 passes this season and has been working with Richard to learn the nuances of the option routes that running backs are often asked to run.

Richard is more than willing to mentor the franchise’s feature back.

“Josh is a bell cow. Josh is the guy, and he can do everything,” said Richard, who also has 1,170 career rushing yards on 5.0 yards per carry.

“We went back actually and looked at (that game tape). Very similar system,” Guenther said. “They’re good at what they do. They play a fast tempo.”

The Bengals in that game limited Saints quarterback Drew Brees to 255 passing yards and one touchdown and held New Orleans to 65 rushing yards.

Raiders offensive coordinator Greg Olson coached Brees for three years at Purdue, where he was the quarterbacks coach while Brees played from 1997 to 2000.

Under Olson, Brees started three years and passed for 11,792 yards, 90 touchdowns and 45 interceptions. Olson said he knew Brees was going to be a special player “a week into the two-a-day training camp.”

“I saved an article from the West Lafayette Journal, ‘Brees climbs depth chart because of accuracy,’” Olson recalled. “His accuracy really jumped out at us.”

Brees has led the NFL six times in completion percentage, and his career mark of 67.6 percent is the best in league history.

Offensive tackles Trent Brown (calf) and Sam Young (groin), wide receiver Henry Ruggs (knee) and linebacker Nick Kwiatkoski (pectoral) did not practice Friday. Neither did cornerback Lamarcus Joyner, though he does not have an injury designation. Offensive guard Richie Incognito (Achilles) was a limited participant Friday after sitting out Thursday’s practice.