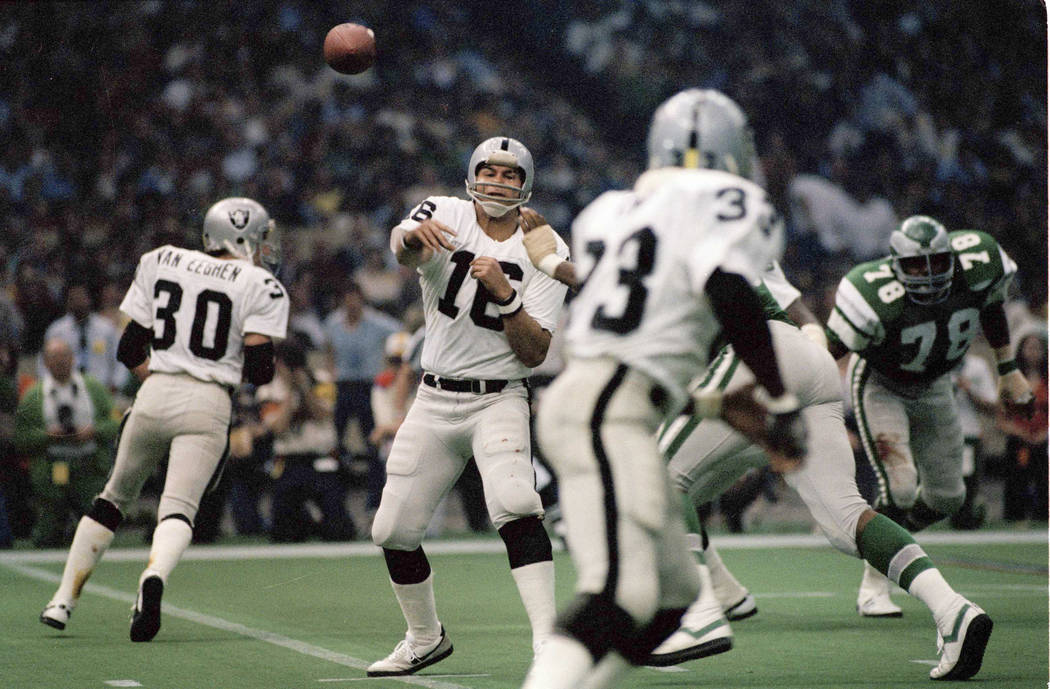 Jim Plunkett (16) quarterback for the Oakland Raiders in Super Bowl XV at the Louisiana Superdome in New Orleans against the Philadelphia Eagles, Jan. 25, 1981. The Raiders won 27-10. (AP Photo) 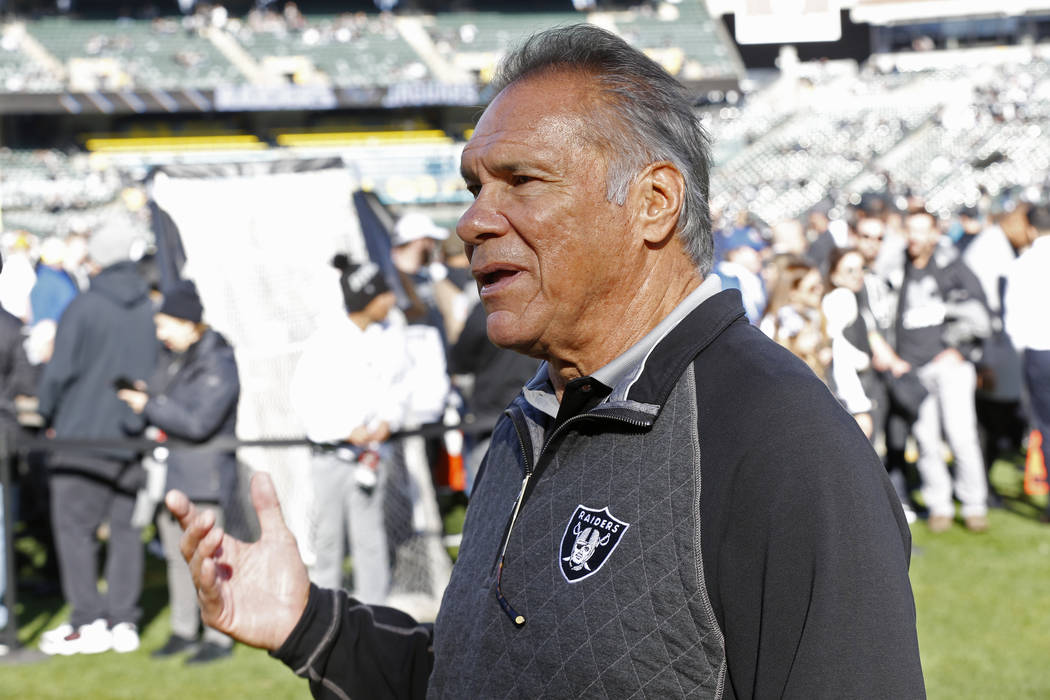 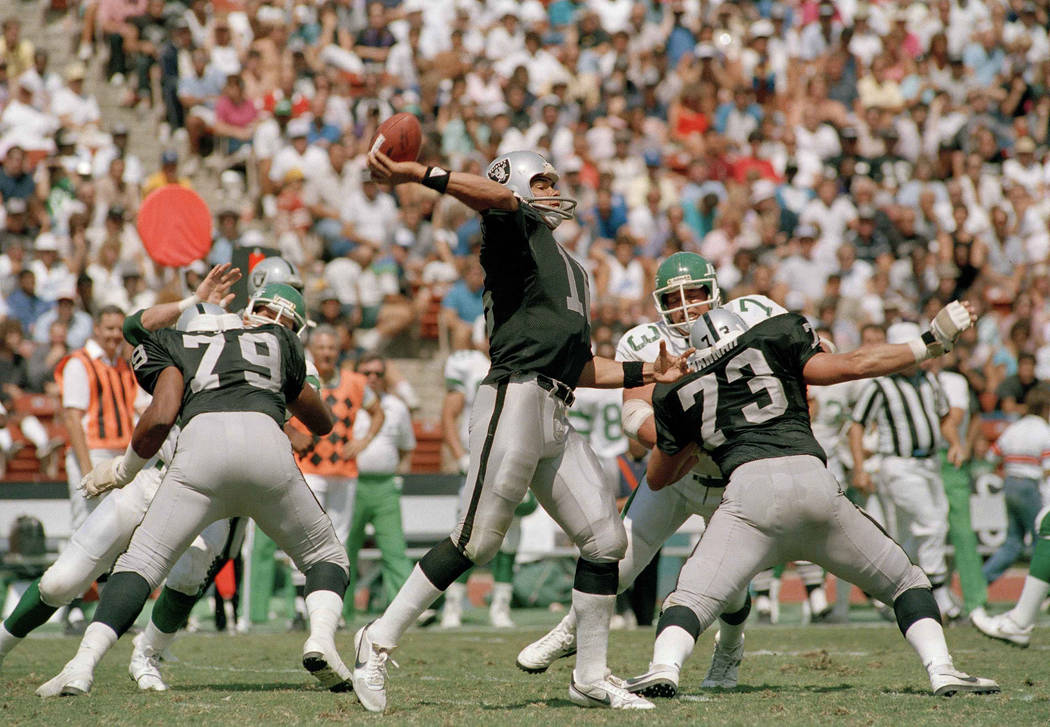 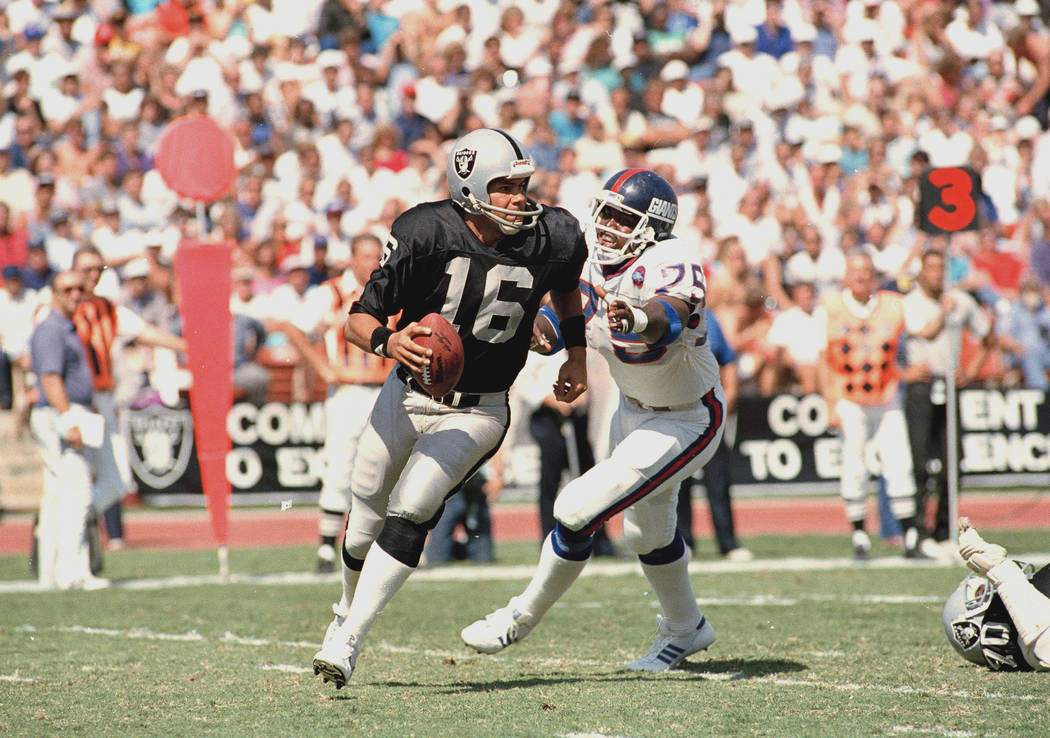 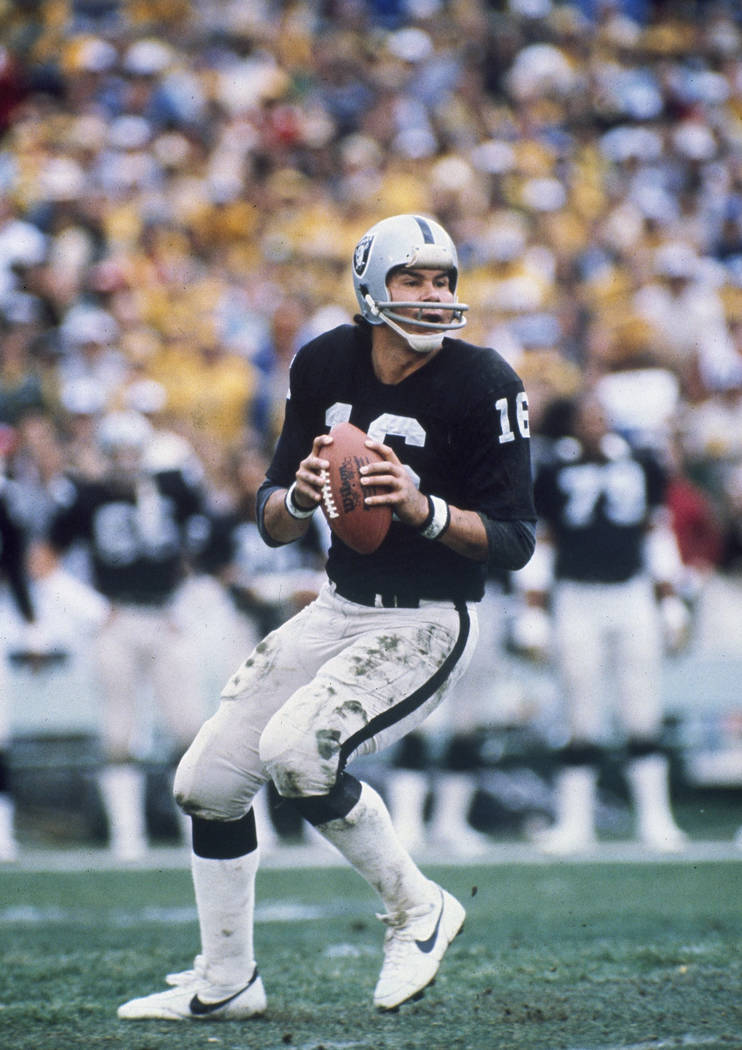 Oakland Raiders quarterback Jim Plunkett (16) prepares to throw the ball in a game against the San Diego Chargers in Oakland, Nov. 22, 1981. (AP Photo) 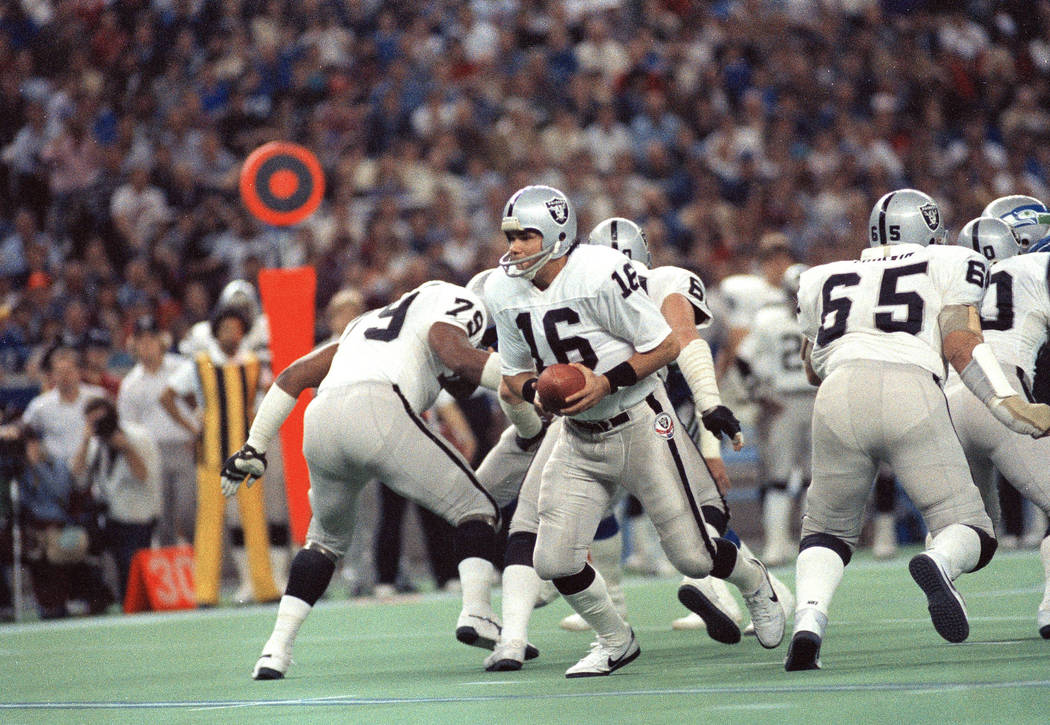 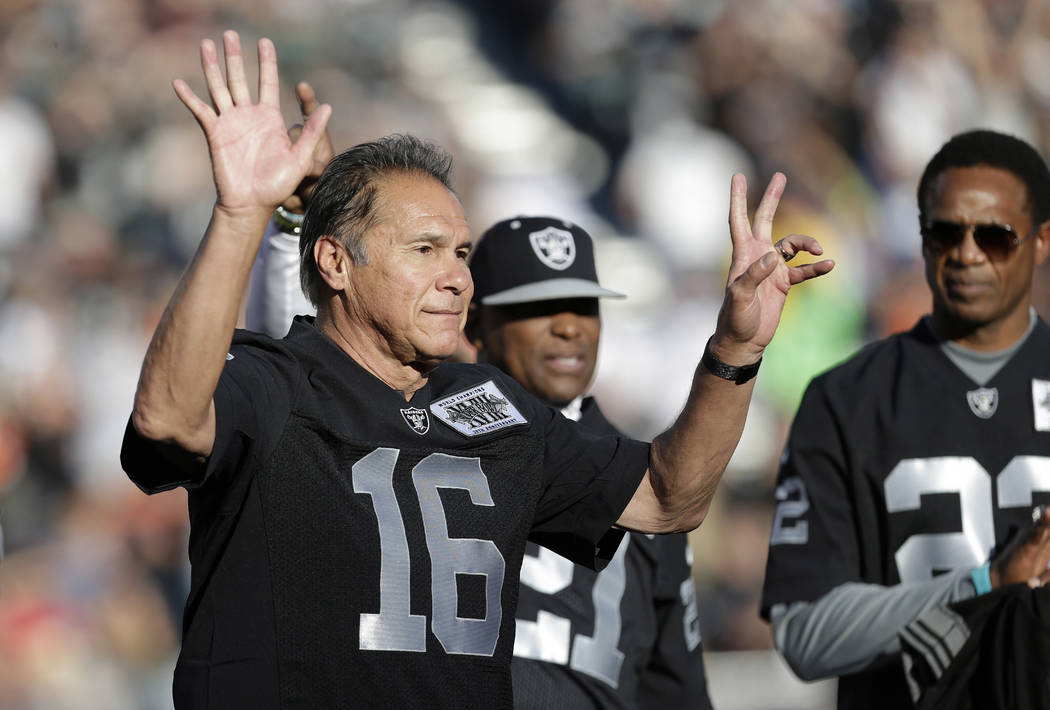 Former Oakland Raiders quarterback Jim Plunkett waves during a ceremony honoring the 1983 Los Angeles Raiders, which won the Super Bowl, during halftime of an NFL football game between the Oakland Raiders and the Denver Broncos in Oakland, Calif., Sunday, Dec. 29, 2013. (AP Photo/Tony Avelar) 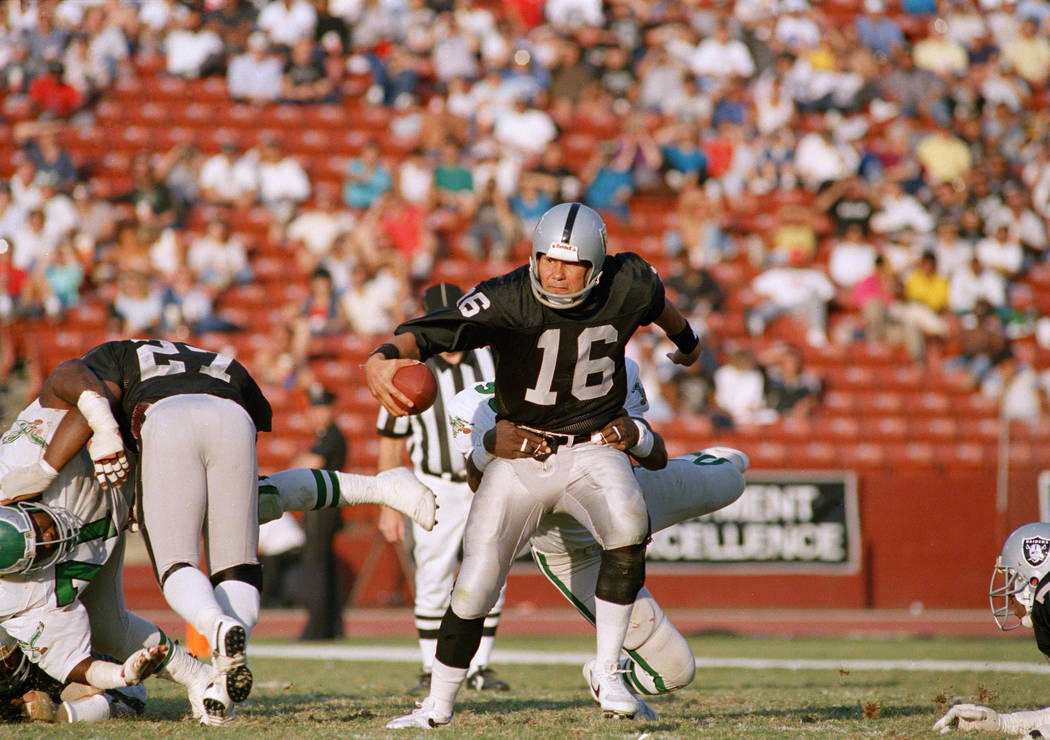 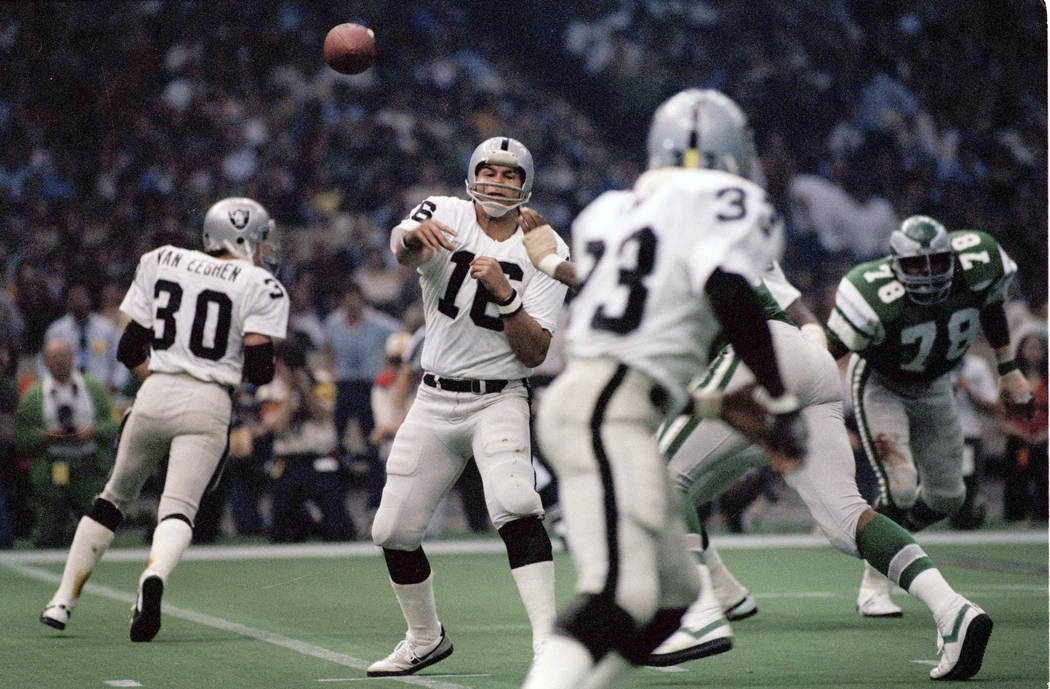 In this Jan. 25, 1981, Oakland Raiders quarterback Jim Plunkett (16) throws during NFL football's Super Bowl XV in New Orleans against the Philadelphia Eagles. The first wild-card team to win the Super Bowl, the Raiders spent most of the year as a mistake-prone offensive mess. Oakland turned it over 44 times and finished 16th in total yards. Plunkett completed just 51 percent of his passes and had 16 interceptions to go with 18 touchdown passes. (AP Photo)

Editor’s note: This is part of an occasional series on the history of the Raiders.

Jim Plunkett is one of the most consequential quarterbacks in Raiders history, having helped lead the team to a pair of Super Bowl victories.

And yet he’s the only eligible quarterback to have won two Super Bowls to not be enshrined in the Pro Football Hall of Fame.

Why? Frankly, aside from those two Super Bowl runs with the Raiders — one in Oakland in 1980, the other in Los Angeles in 1983 — Plunkett’s career was mediocre.

But while the football world as a whole may not necessarily see Plunkett as a Hall of Famer, there’s no doubt about his legendary status as a Raider.

Plunkett entered the league in 1971 as the No. 1 overall pick by the Patriots after winning the Heisman Trophy at Stanford — besting fellow future pro quarterbacks Joe Theismann of Notre Dame and Archie Manning of Ole Miss. Following five middling seasons with New England, the Patriots traded Plunkett to the 49ers. While Plunkett’s San Francisco career started with some success, he was 11-15 as a starter.

The 49ers released Plunkett prior to the start of the 1978 season, and the quarterback didn’t go far — signing with the Raiders as as backup.

While he didn’t throw a pass that year and appeared sparingly in 1979, Plunkett took over after quarterback Dan Pastorini broke his leg during a 31-17 loss to the Chiefs on Oct. 5, 1980. Plunkett entered in relief and completed 20 of 52 passes — a high number of attempts by today’s standards but astronomical for 1980 — with five interceptions.

But coach Tom Flores elected to stick with Plunkett rather than try to teach another quarterback the offense, and the gamble paid off. Plunkett led the team to a 9-2 record in his 11 starts in 1980, and the Raiders’ 11-5 record earned them a wild-card berth.

After victories over the Oilers and Browns, Plunkett and the Raiders defeated Hall of Fame QB Dan Fouts and the division-rival Chargers in the AFC Championship game to advance to Super Bowl XV against the Eagles. Plunkett excelled in the Super Bowl, throwing for 261 yards and three touchdowns en route to a 27-10 victory.

Plunkett’s Super Bowl MVP performance was historic. It was the first time a team quarterbacked by a minority — Plunkett is Hispanic — won the big game. He was only the second player to win a Heisman and Super Bowl MVP after the Cowboys quarterback Roger Staubach. Marcus Allen of the Raiders and Desmond Howard of the Packers would later accomplish the feat.

In 1983, Plunkett again came on in relief of an injured quarterback, this time Marc Wilson, and won the Super Bowl. He had arguably his best season that year, throwing for 2,935 yards with 20 touchdowns and 18 interceptions, leading the Raiders to a 10-3 record as a starter. That year, the Raiders rode Allen to their Super Bowl victory, with the running back amassing 466 yards and four touchdowns on the ground in the postseason. But Plunkett still completed 16 of 25 passes for 172 yards and a touchdown in a 38-9 rout of Washington in Super Bowl XVIII.

Plunkett may not ever be selected for the Pro Football Hall of fame, but winning two Super Bowls makes him one of the most important players in Raiders history.