Raiders head coach Jon Gruden talks about the team's game one performance against the Carolina Panthers and what needs to be improved. (Nathan Asselin/Las Vegas Review-Journal) 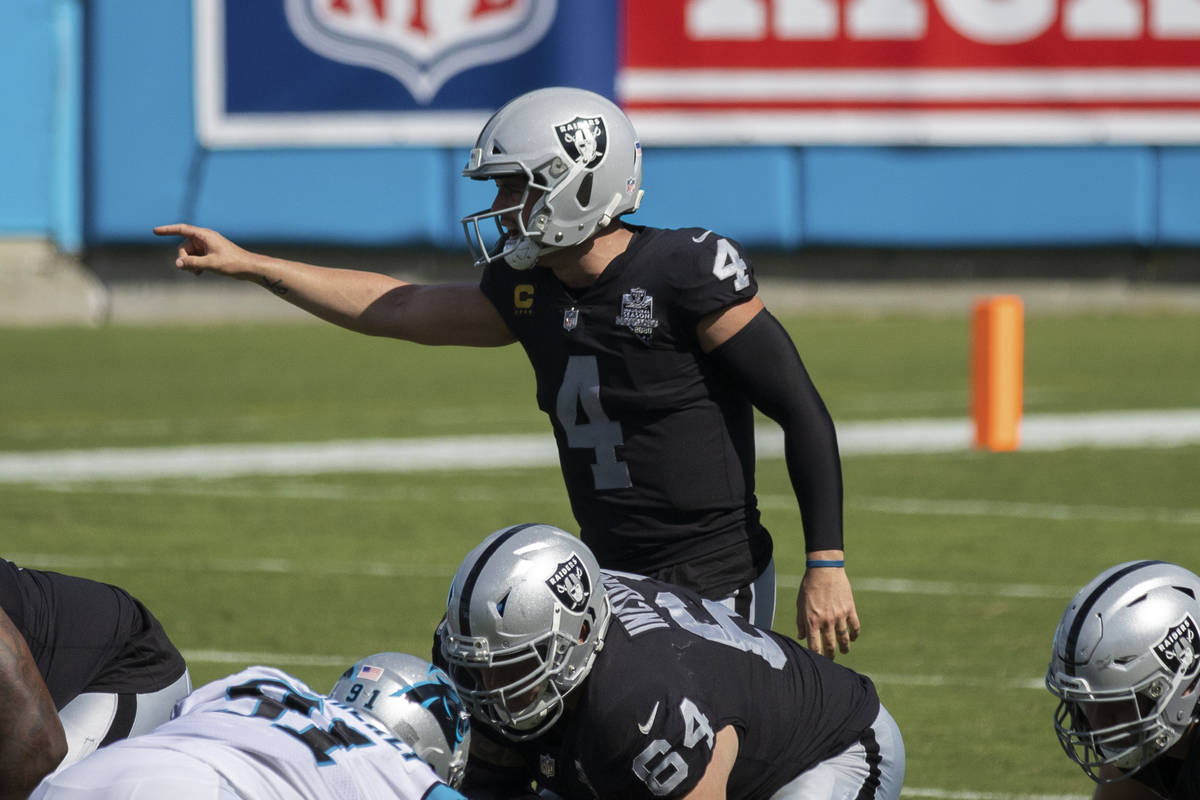 Las Vegas Raiders quarterback Derek Carr (4) calls an audible during the second half of an NFL football game with the Carolina Panthers on Sunday, Sept. 13, 2020, at Bank of America Stadium, in Charlotte, N.C. (Benjamin Hager/Las Vegas Review-Journal) @benjaminhphoto

One of the side effects of playing games in a stadium devoid of fans is how clearly the quarterback’s signals can be heard from the sidelines and even through the television microphones.

It was one particular audible that caught the attention of Raiders’ coach Jon Gruden.

“Cindy Gruden, Tiger Woods,” Derek Carr screamed to his teammates at the line of scrimmage in a call that was clear on the broadcast.

“Derek used my wife’s name on TV in one of his audibles, so it must not have been too loud in there,” Gruden joked Monday. “I’m still trying to figure out why Cindy Gruden’s name came up during the game. I’ve got to look into that.”

Carr was making calls at the line of scrimmage throughout the game, which Gruden said is normal for the Raiders’ offense. The only difference was how clearly everything could be heard.

“Unfortunately for me, I could never hear him until yesterday,” Gruden said with a smile. “So I don’t know what he’s been up to at the line of scrimmage, but he better keep my wife out of it from now on.”

There is a practical side to the silliness of hearing all the audibles.

Future opponents will now have plenty of information on everything teams are trying to call at the line of scrimmage, including the Raiders.

Former Raiders coach Tom Flores, a Hall of Fame nominee, will sit in with the Raiders radio crew for Monday night’s game against the Saints at Allegiant Stadium.

It will mark his first game in the booth since 2018 when his 21-year run as a broadcaster for the team ended.

“When (team president) Marc Badain called me to say he and (owner) Mark Davis would like me to come to the first game, I was thrilled,” Flores said in a news release. “I wanted to go to the game, knowing that it was going to be limited, and when they asked that I be in the radio booth I got excited — I was like a little kid for Christ’s sake.”

Flores will join the current radio team of Brent Musburger and Lincoln Kennedy. The game will air locally on KOMP-FM (92.3) and KRLV-AM (920).

Musburger was on the call for Flores’ first Super Bowl as a head coach at the end of the 1980 season when the Raiders beat the Eagles 27-10.

The Raiders got some good news on Monday as linebacker Nick Kwiatkoski didn’t suffer a tear of the pectoral muscle.

Kwiatkoski, who did not return to Sunday’s game after suffering the injury, could still miss some time, though avoiding surgery will enable him to return to action sooner than feared.

“We’re still waiting on the results from the trainer,” he said Monday. “We’ll update you when we know something.”

Brown left the game after just three plays with the injury. He also missed the vast majority of training camp.

“It’s obviously a concern,” Gruden said. “But I’m good at being concerned. I’m really good at it.”

Rookie cornerback Amik Robertson was active Sunday against the Panthers, but did not see a single defensive snap.

Johnathan Abram and Cory Littleton played all 67 snaps, with Erik Harris just behind at 65 of the 67.

Clelin Ferrell played 38 snaps at defensive end and 14 at defensive tackle. Pro Football Focus had him as the highest-graded defensive player for the Raiders on Sunday.

4
Graney: Derek Carr is where he should be for now — watching