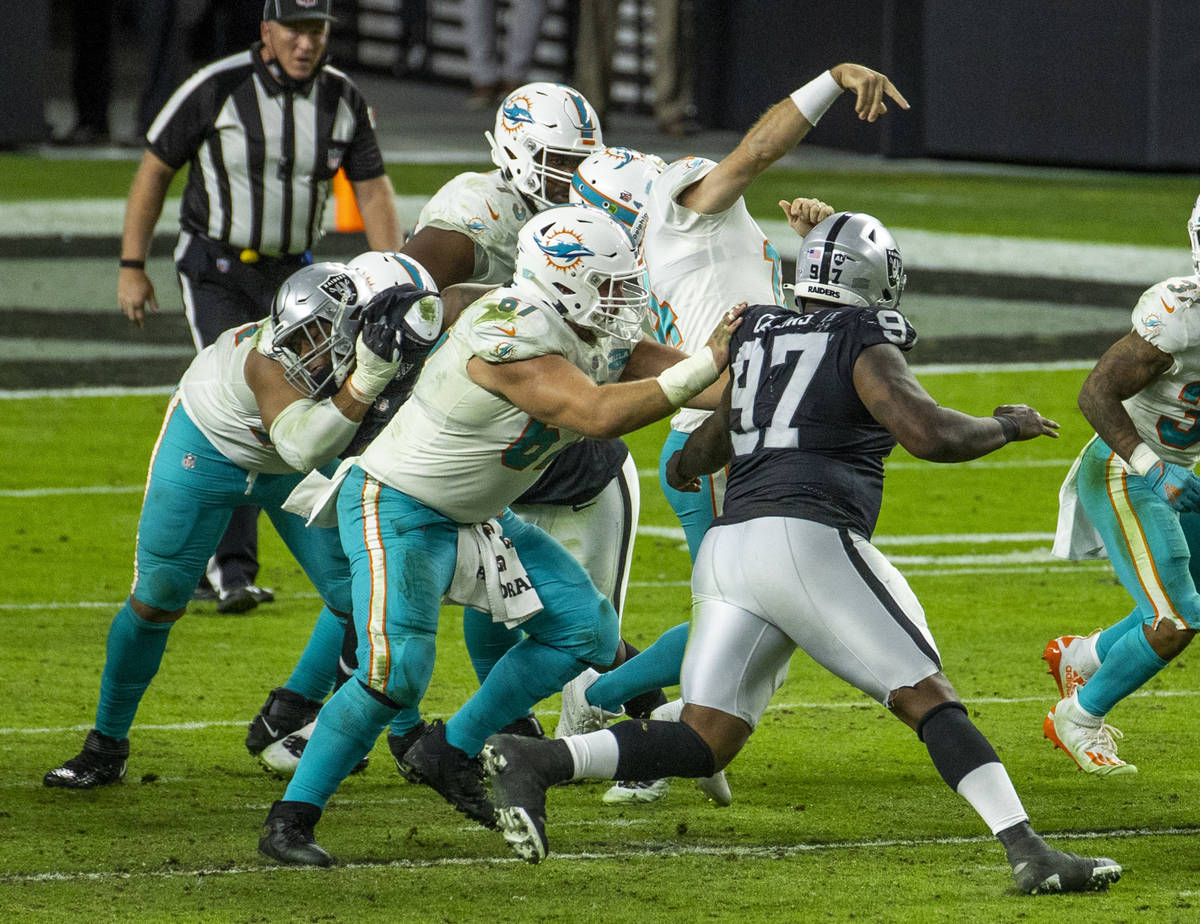 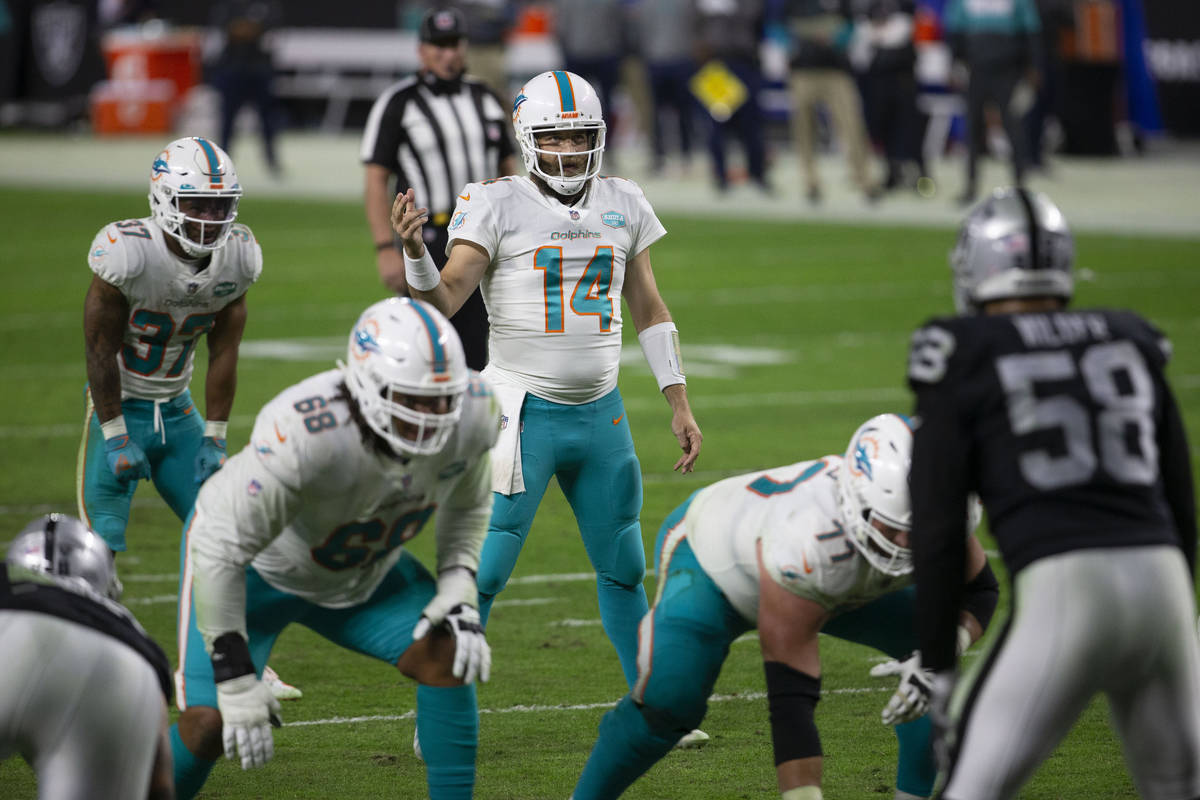 Miami Dolphins quarterback Ryan Fitzpatrick (14) calls a play at the line of scrimmage during the fourth quarter of an NFL football game against the Raiders on Saturday, Dec. 26, 2020, at Allegiant Stadium in Las Vegas. (Heidi Fang/Las Vegas Review-Journal) @Heidi Fang 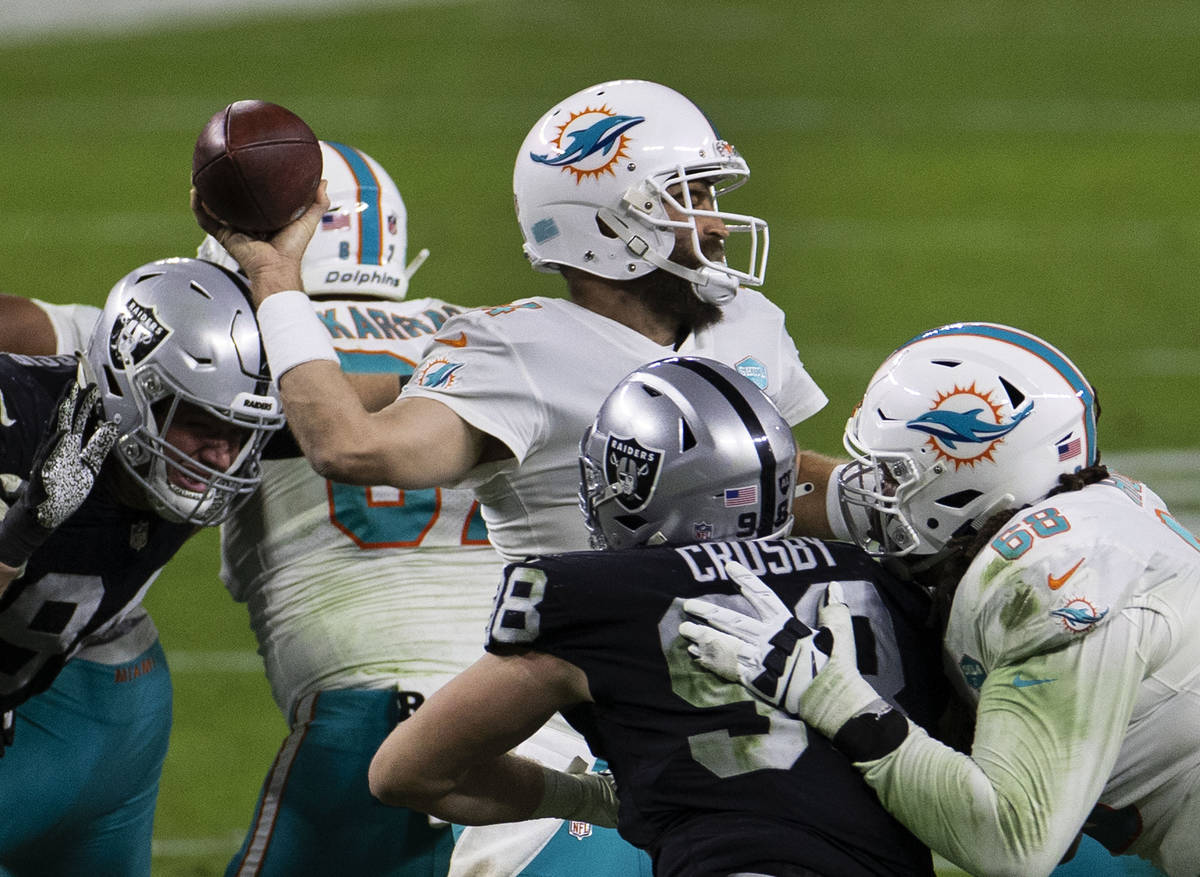 Jon Gruden had an extra day to prepare for his weekly Monday video conference with reporters this week because the Raiders played on Saturday.

It still wasn’t enough time for him to get over what happened at the end of that wild game.

“They have 19 seconds left with no timeouts at the minus-25-yard line,” Gruden said of the Dolphins. “For us to not get off the field with a victory, it’s a shame, it’s a disgrace and it’s a reflection on me only. We have to do a lot better job than that.”

Gruden is still comfortable with his decision to take a knee on third down inside the 1-yard line in order to run the clock down before the Dolphins had one final shot in the closing seconds.

The decision did make the Raiders an overwhelming favorite to win the game at the time, but a missed defensive assignment combined with a facemask penalty put the Dolphins in position to win the game on a field goal.

“I have a regret because we lost the game on the most horrific play I’ve ever been associated with,” Gruden said. “We study analytics. People think we don’t study analytics, but we study analytics. Analytics say that was a great move.” That’s way analytics don’t know anything either. But I’m just kidding.

Despite the late meltdown and the struggles adjusting once the Dolphins switched quarterbacks from Tua Tagovailoa to Ryan Fitzpatrick, Gruden did credit interim defensive coordinator Rod Marinelli for putting together a solid game plan in his first full week of preparation.

“I think everybody noticed (a difference on defense),” Gruden said. “We didn’t have a lot of errors. Guys were confident and sure of themselves. It wasn’t perfect and I don’t want to sound like I’m critiquing Paul Guenther either, but we didn’t do as much on defense. We played hard.

“The disappointing thing is we played well enough to win that football game. It goes down to one lousy play and it still sticks in my gut the wrong way right now.”

Gruden was pleased with how Derek Carr played Saturday despite the quarterback suffering a groin injury in the previous game.

There were no setbacks physically, so Gruden expects Carr to start in the finale against Denver on Sunday.

“I thought he responded to a lot of different things and threw the ball great,” Gruden said. “Threw the ball down the field accurately and had a great scramble bomb to (Nelson) Agholor to put us ahead. Then he brought us down the field again to win the game. Derek will start and finish the season just like we had anticipated he would.”

Gruden didn’t rule out putting in a few plays for backup quarterback Marcus Mariota, who played well two weeks ago in his only appearance of the season.

He said there are pros and cons to using a backup like Mariota in a variety of special packages throughout a game.

“You can keep the defense off balance,” he said. “But I think when we put Marcus in at quarterback, most coaches are pretty sharp. I think they know plays can be different.

“He’s not the only dual-threat quarterback playing in the NFL. I think it might apply a different defense. You might see some different looks. There’s a lot of things obviously, but those are the two main things.”

Defensive lineman Clelin Ferrell is not expected to play Sunday as he continues to deal with a shoulder injury.

Gruden stopped short of ruling him out, but admitted he would be surprised if Ferrell were able to get back on the field.

He hopes to have defensive backs Daryl Worley and Erik Harris back from the reserve/COVID-19 list, along with defensive backs coach Jim O’Neil and assistant Taver Johnson.

Linebackers Nick Kwiatkoski and Nicholas Morrow should be able to return late in the week and could play Sunday, provided they clear the protocols.