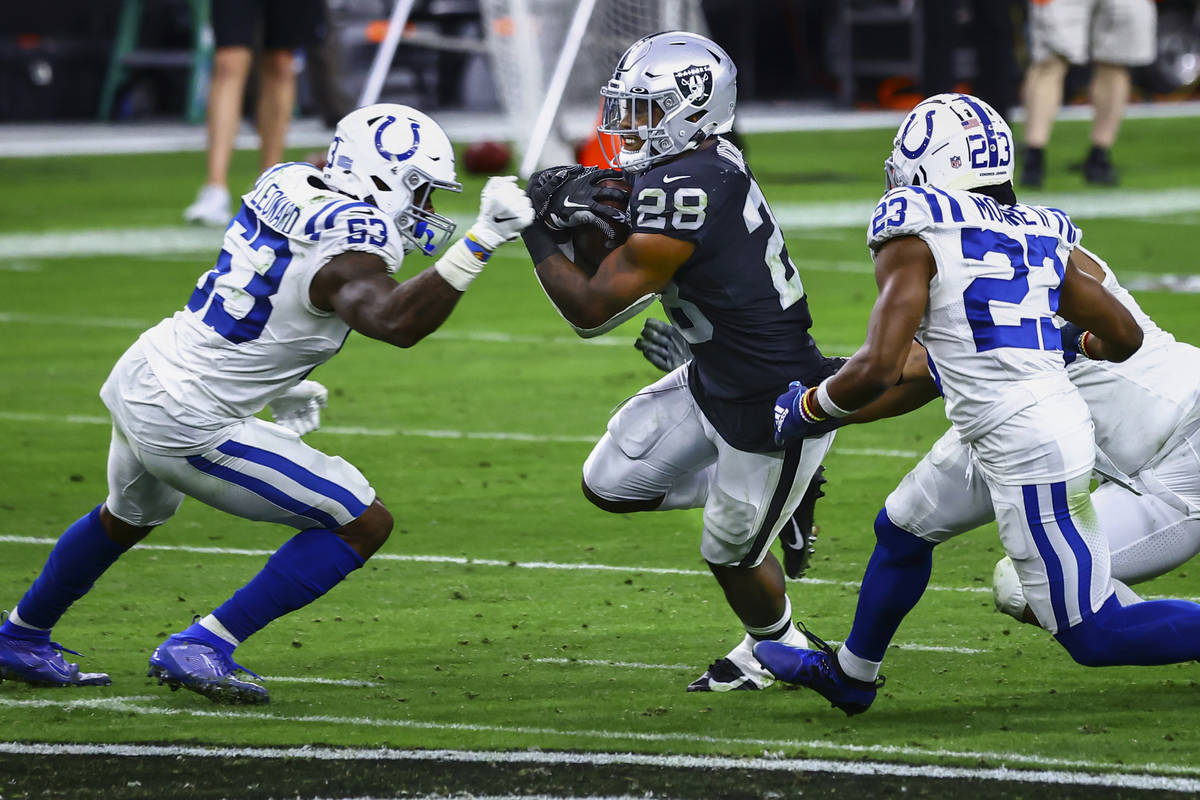 Raiders running back Josh Jacobs (28) tries to get past Indianapolis Colts defense, including outside linebacker Darius Leonard (53), in the third quarter during an NFL football game on Sunday, Dec. 13, 2020, at Allegiant Stadium, in Las Vegas. (Chase Stevens/Las Vegas Review-Journal) @csstevensphoto 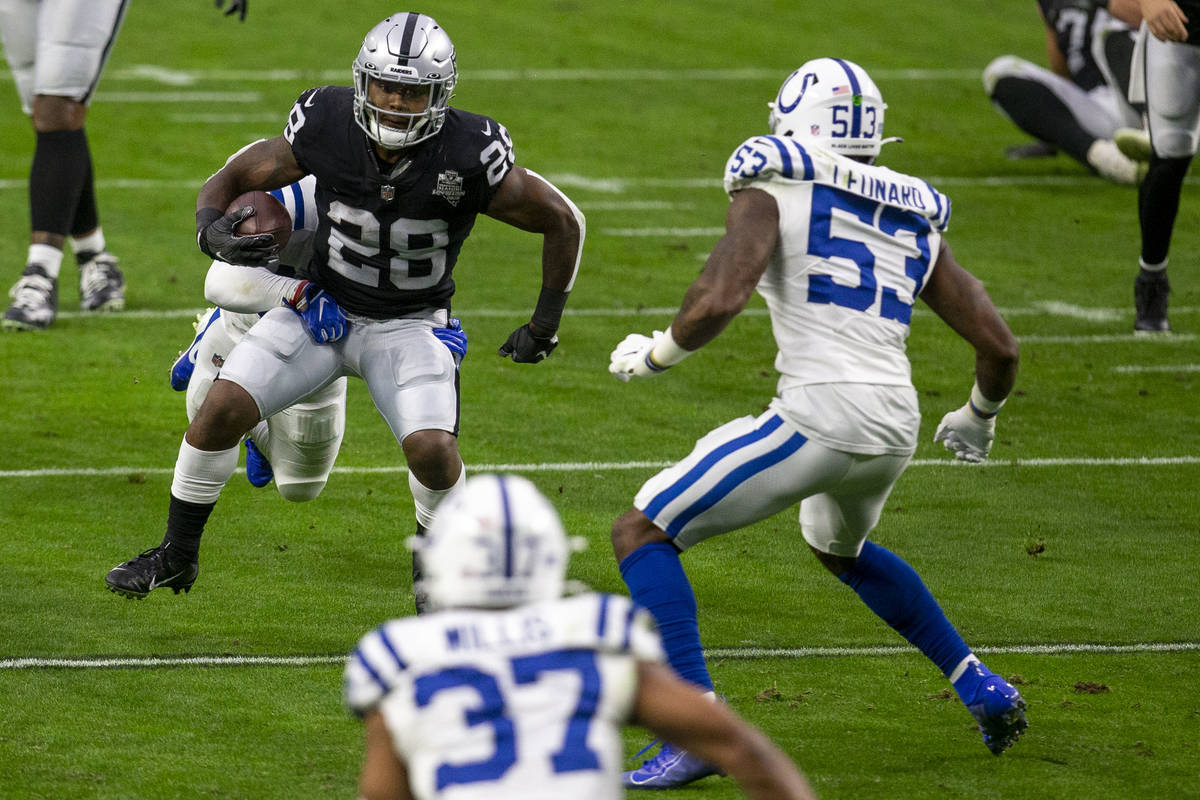 The star ball carrier didn’t have quite the same impact on the field later in the day.

Jacobs sparked controversy when he sent out two posts about two hours before the Raiders hosted the Indianapolis Colts in a pivotal game with major AFC playoff implications, insinuating he would not be able to play.

If he was joking, coach Jon Gruden wasn’t in on it.

“I don’t have social media, so I don’t really know what to say about that right now,” he said after a 44-27 loss at Allegiant Stadium. “I’ll answer any questions about the game, not the internet.”

Jacobs missed last week’s game with an ankle injury and was limited in practice throughout the week. He was listed as questionable for Sunday’s game.

Bettors and fantasy owners were scrambling all week for information on whether Jacobs would be able to play, and many believed he provided an answer on his verified account.

He added a message in tiny print, indicating how much he cared about fantasy football.

Jacobs was not made available to the media after the game.

It became clear he was going to play when the team made him active and announced Theo Riddick as a healthy scratch, but even that didn’t quell fears for many interested parties.

Social media searches and mentions of Jacobs soared in the 90 minutes before kickoff, only calming once the Raiders took the field and Jacobs had a carry on the team’s first offensive snap.

Even though he took on a fairly normal workload, Jacobs didn’t produce much offense.

He finished with 13 carries for 49 yards and caught three of his five targets for 25 yards. He hasn’t scored since Nov. 22 against the Kansas City Chiefs.

Gruden said he thinks Jacobs is close to being fully healthy.

“Josh is a difference maker for us running and receiving,” Gruden said. “I think he’s getting close to being the Jacobs we all know.”

The lack of production in the running game wasn’t limited to Jacobs. The Raiders had 79 yards on the ground and have failed to eclipse 100 yards in four consecutive games.

“That’s a top five defense,” said Gruden, citing superstars DeForest Buckner, Denico Autry and Darius Leonard. “We had some good runs. We just couldn’t stay with it. We were in a situation where we had to score a touchdown every time we had the ball, it seemed. It’s hard to establish the run in those circumstances.”

Jacobs wasn’t the only key piece of the run game to return. Starting right tackle Trent Brown, who had played in only one full game and three snaps of another this season, was in the lineup for the first time since Oct. 11 at Kansas City.

“I thought he was a difference maker,” Gruden said. “He played great. I thought the pocket was clean, and I thought we did a good job moving the ball.

Quarterback Derek Carr said he thinks one of the biggest problems with the running game has been defenses scheming to stop it.

“Teams are trying to make us throw,” he said. “That’s what the Jets did and some other teams have done early in the season. But I still feel like we averaged almost 4 yards. I felt like when Josh was in there, he was running pretty well. There were some creases in there.”

The Raiders hope to find a cure when they host the Chargers on Thursday. Las Vegas ran for 160 yards on a season-high 6.2 yards per carry in the first meeting last month in Los Angeles, a 31-26 victory.