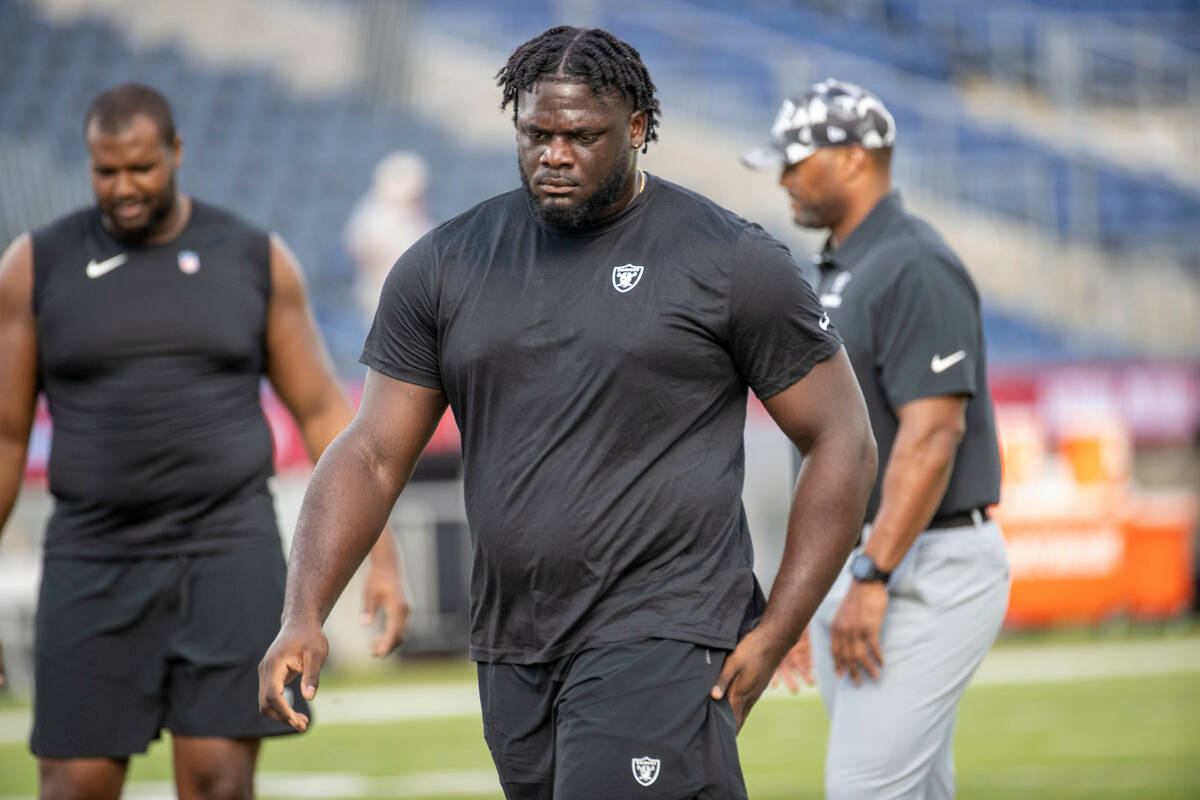 Raiders offensive tackle Alex Leatherwood warms up on the field before the NFL Hall of Fame game against the Jacksonville Jaguars at Tom Benson Hall of Fame Stadium on Thursday, Aug. 4, 2022, in Canton, Ohio. (Heidi Fang/Las Vegas Review-Journal) @HeidiFang 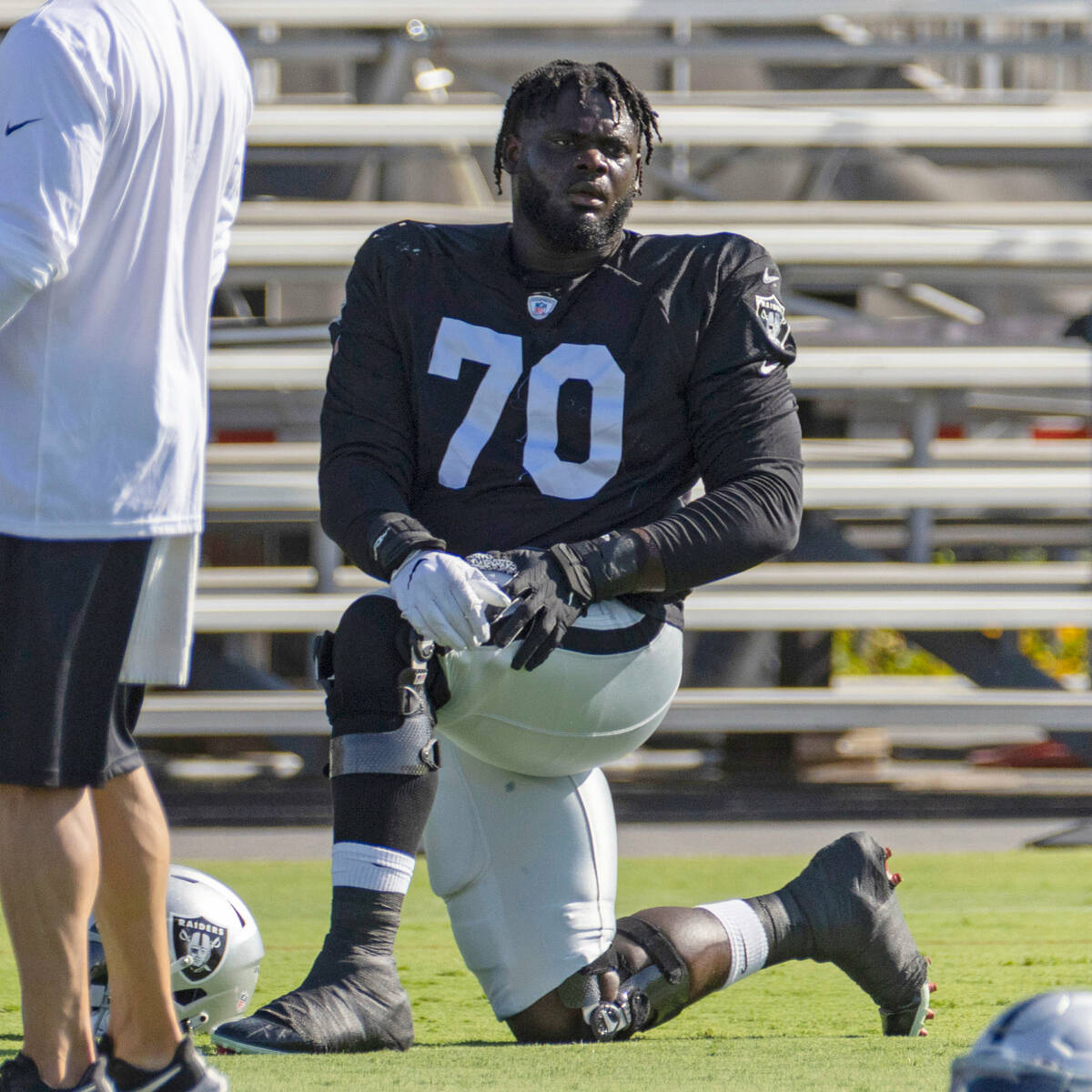 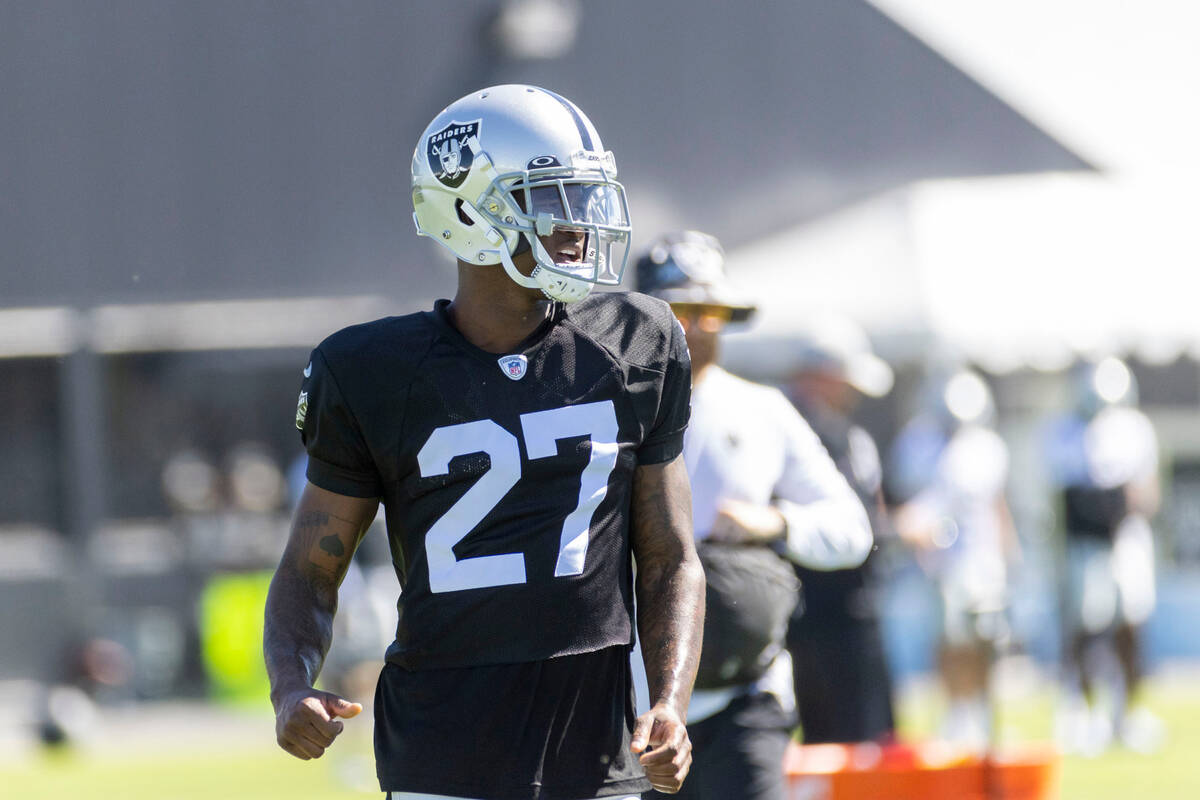 Going all the way back to the day they were hired last January, Raiders coach Josh McDaniels and general manager Dave Ziegler stressed their roster-building philosophy would be based on merit and fit rather than draft status, age or financial implications.

True to their word, the initial 53-man roster they set on cutdown day followed those principles. And they were felt just as much on who made the cut as who didn’t.

None more so than 2021 first-round pick Alex Leatherwood, the 17th overall selection last year and a player former coach Jon Gruden and Mike Mayock pegged as a potential foundational piece of the Raiders’ offensive line.

His stay with the Raiders was barely a year in duration. The club cut Leatherwood on Tuesday, opting to eat the remaining portion of his guaranteed contract — roughly $7 million — rather than keep a player that they had little hope would ever play a big role simply out of financial considerations.

The move was not done frivolously. Leatherwood, who struggled at right tackle and right guard as a rookie, got a clean slate this season from McDaniels and an opportunity to win the right tackle position or a spot on the roster. Leatherwood did not play well in camp or during the preseason, though, and fell so far behind in the competition that the Raiders opted to simply cut him.

As far as right tackle, the Raiders have high hopes for seventh-round rookie Thayer Munford, who is expected to insert himself into the competition for the starting job as soon as he is cleared to return to practice from an undisclosed injury. Until then, it appears Jermaine Eluemunor will hold down the starting job. For now, Jackson Barton begins the year as a swing tackle.

Leatherwood was not the only recent high draft pick parting ways with the Raiders on Tuesday, as 2019 second-round pick Trayvon Mullen, a two-year starter when healthy, was traded to the Cardinals in exchange for a conditional seventh-round pick that could become a sixth-rounder based on playing time.

The trade concluded a near complete overhaul of the cornerback position, with only Nate Hobbs and Amik Robertson returning from last year. Hobbs, who emerged as one of the best cornerbacks in the league as a rookie fifth-round pick last year, will be a cornerstone piece of the secondary along with newcomers Rock Ya-Sin, Anthony Averett and undrafted free agent Sam Webb.

Webb was one of four UDFA’s to make the team along with linebackers Luke Masterson and Darien Butler, as well as safety Isaiah Pola-Mao. In addition, running backs Zamir White and Brittain Brown, guard Dylan Parham, Munford and defensive linemen Matthew Butler and Neil Farrell also made the team as rookie draft picks.

The emergence of White and Brown, coupled with the play of Ameer Abdullah, ultimately pushed veteran Kenyan Drake off the roster last week. It was further proof of the manner in which McDaniels and Ziegler went about building their first Raiders roster.

Wide receiver is another position group where the Raiders made surprising cuts — parting ways with established veterans in favor of promising young players. The Raiders cut veteran Demarcus Robinson a week ago and followed that by cutting Keelan Cole on Tuesday. Both were considered shoo-ins to make the team. Instead, their spots went to youngsters Tyron Johnson and DJ Turner, both of whom offer speed, versatility and special teams prowess.

Cutdown day reaffirmed the new Raiders decision-makers are determined to remake this roster based on their principles.