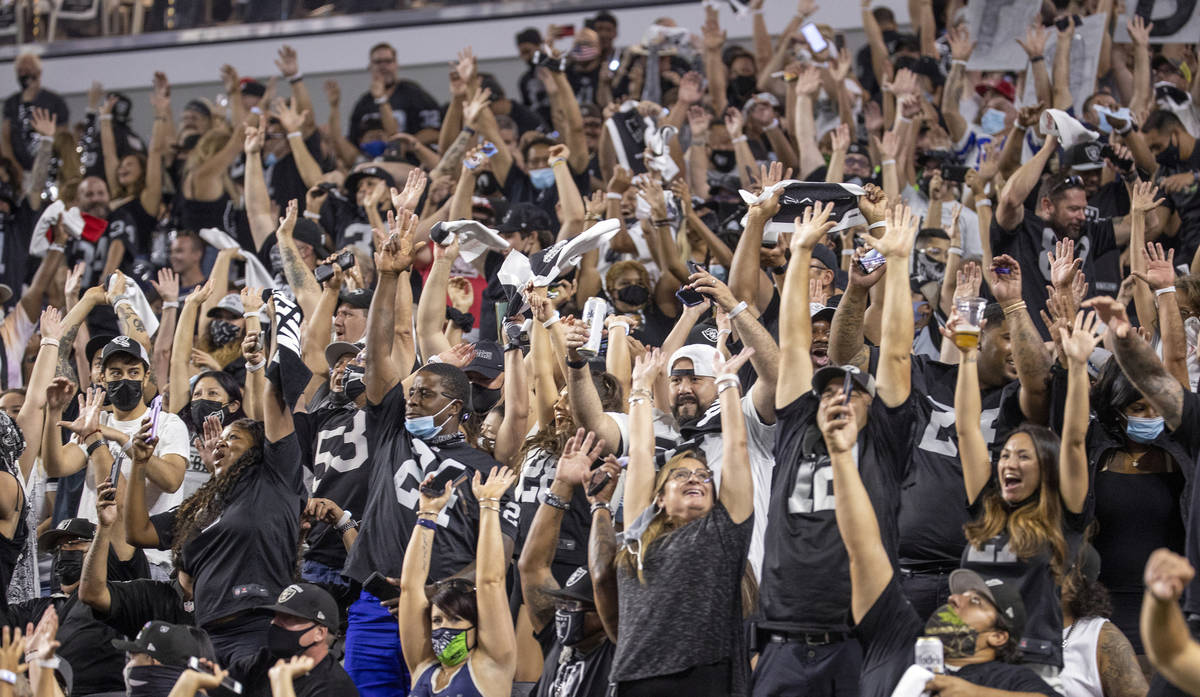 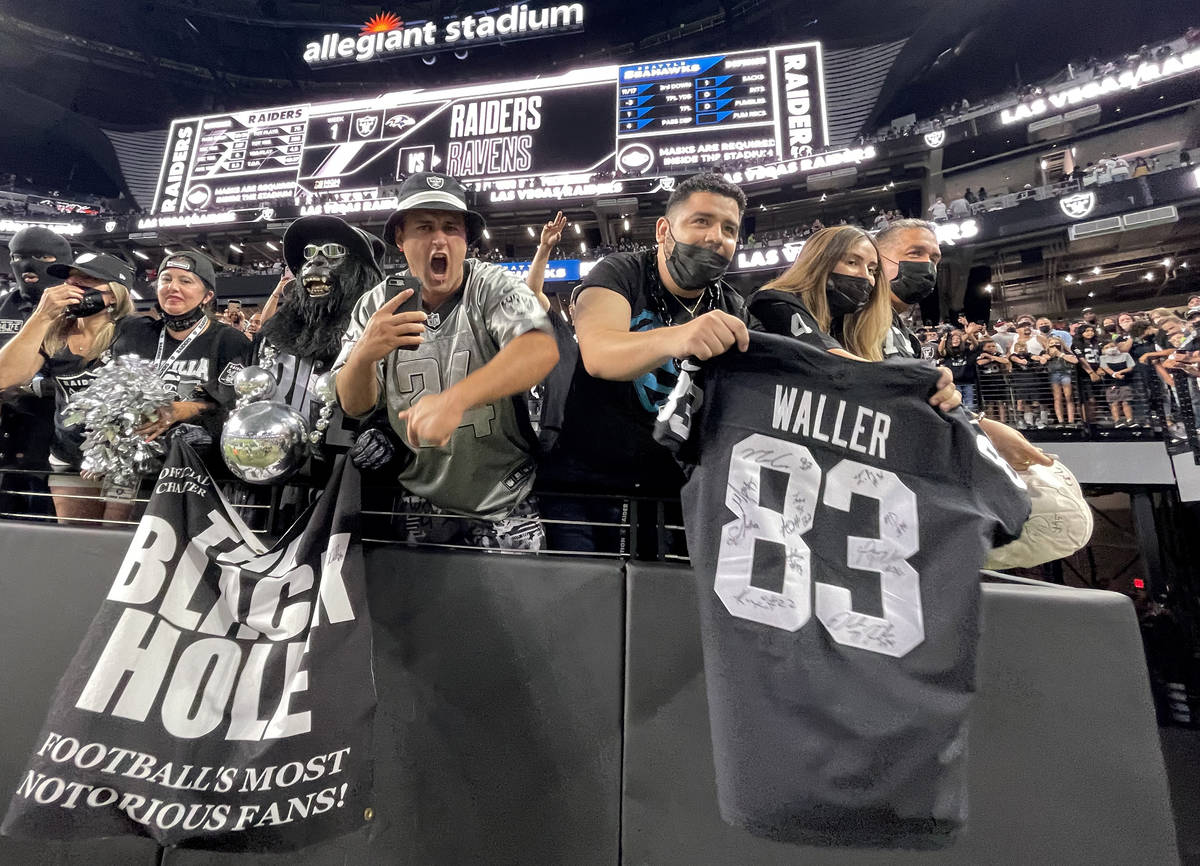 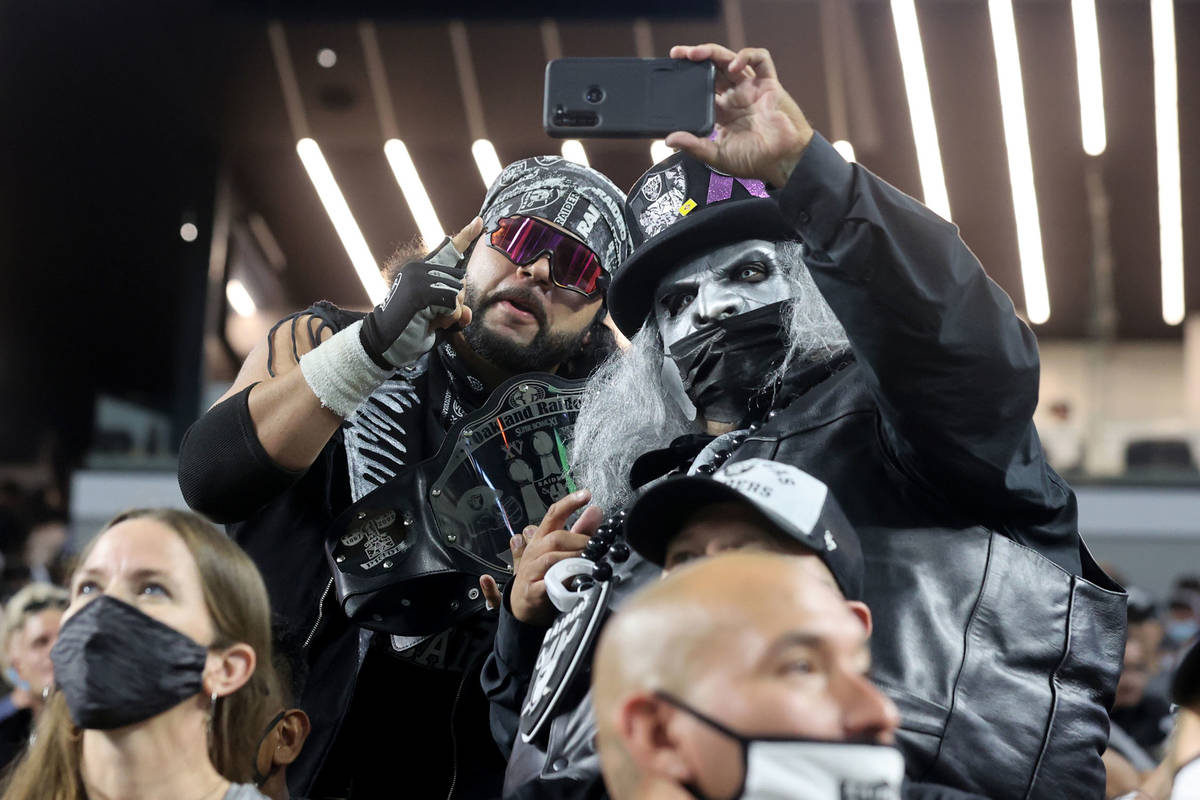 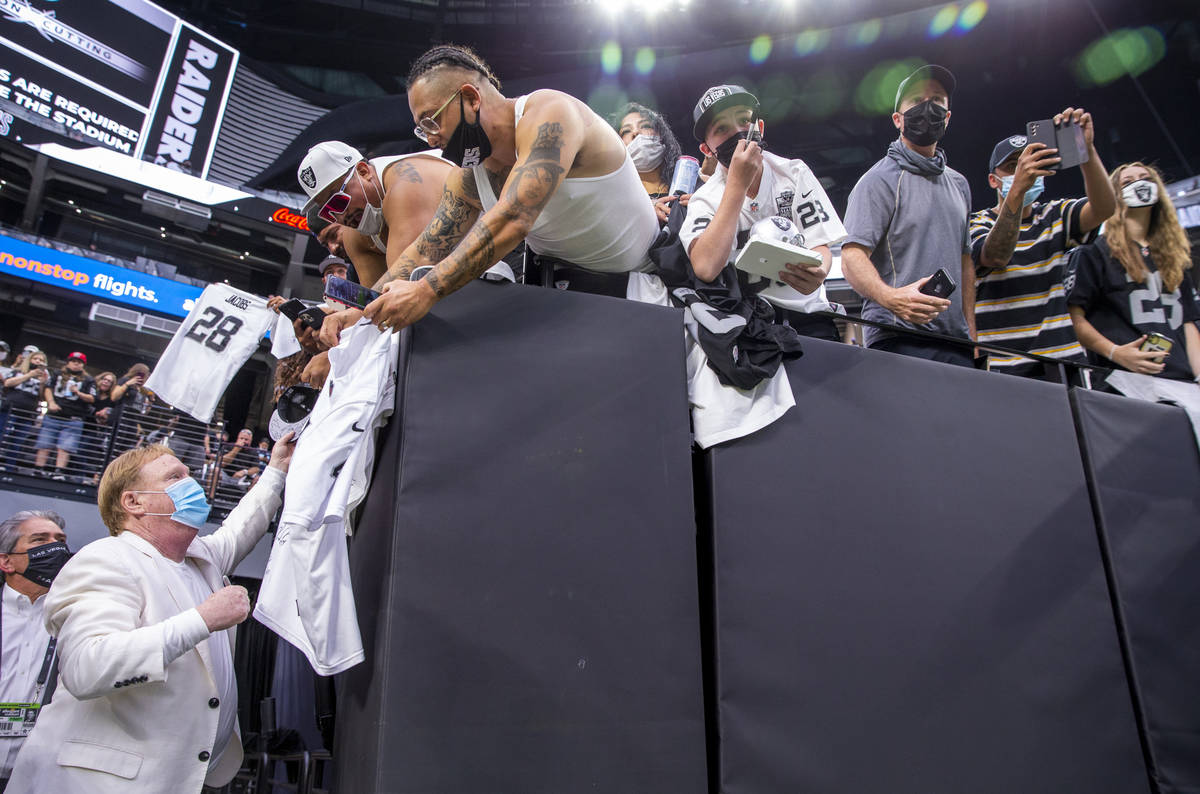 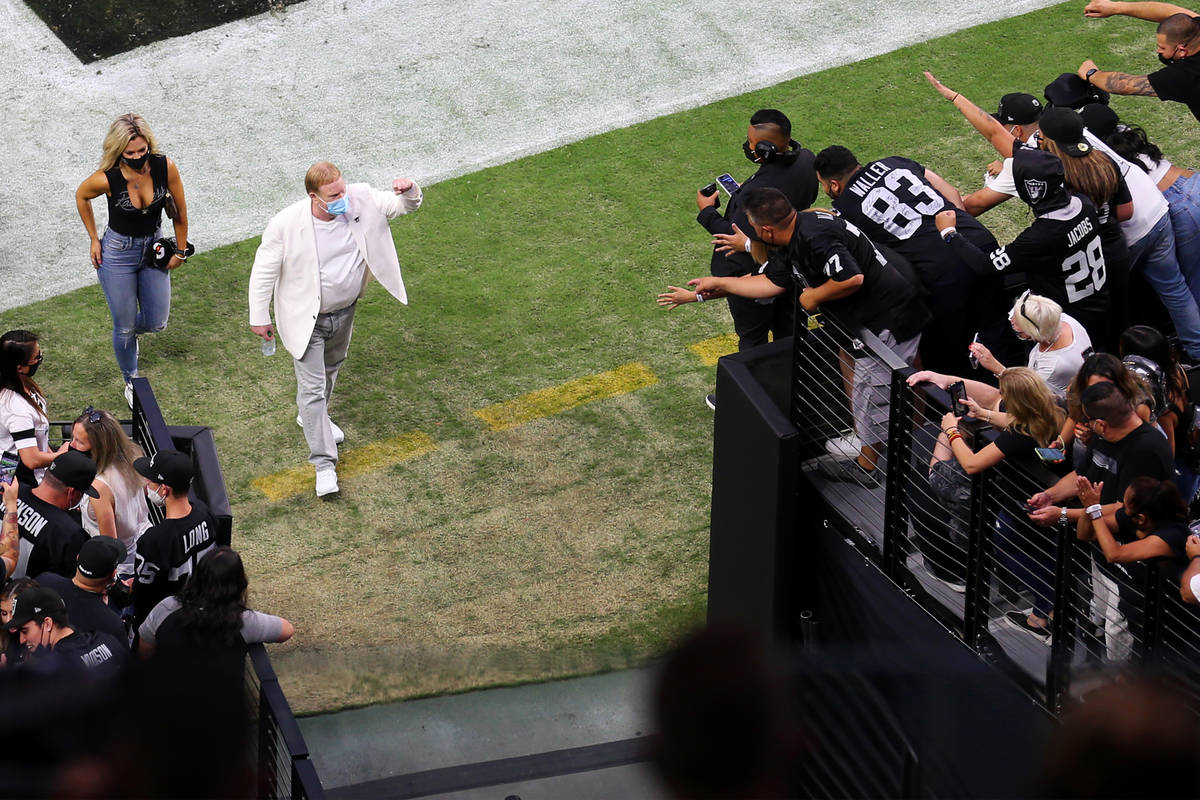 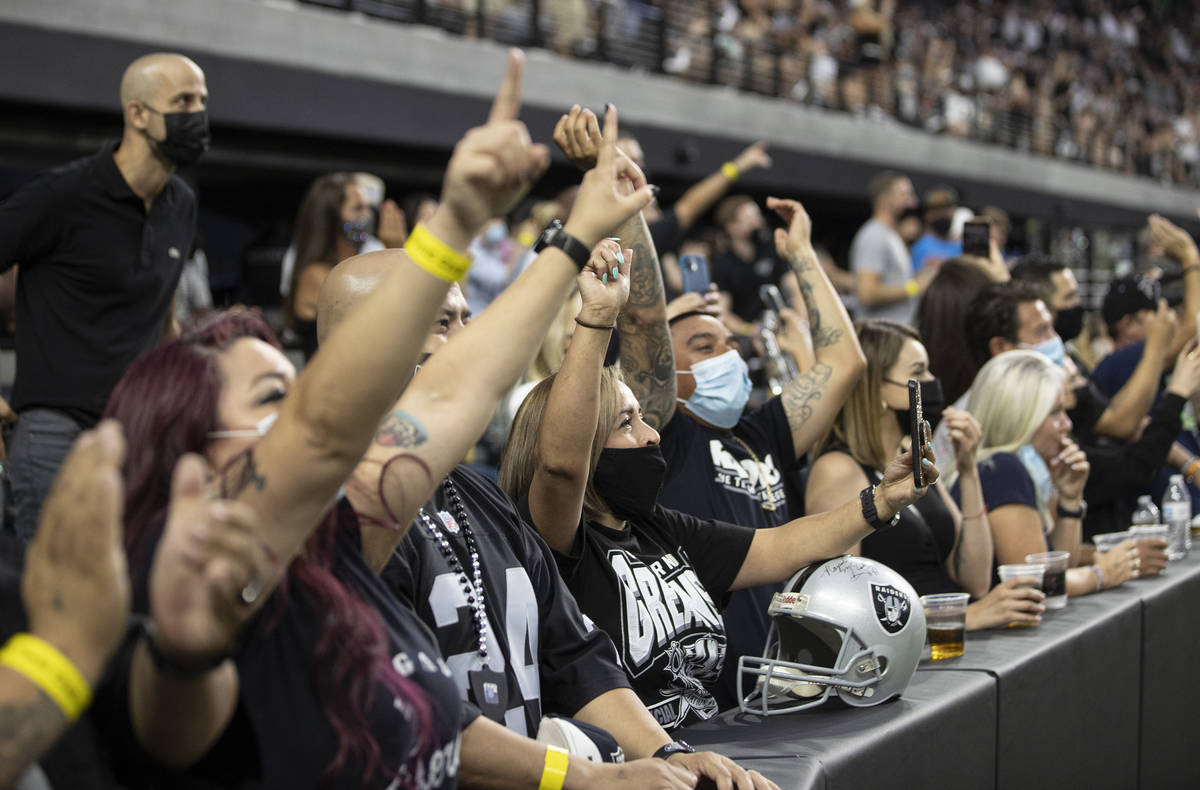 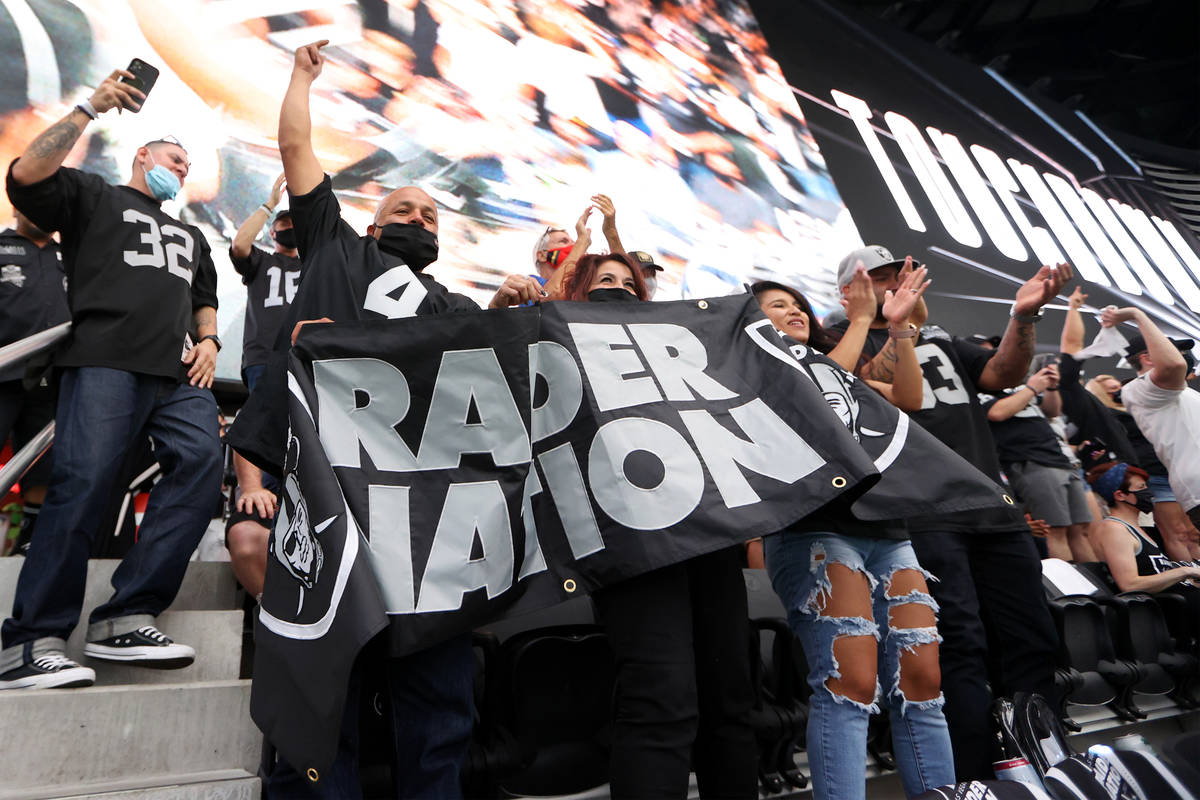 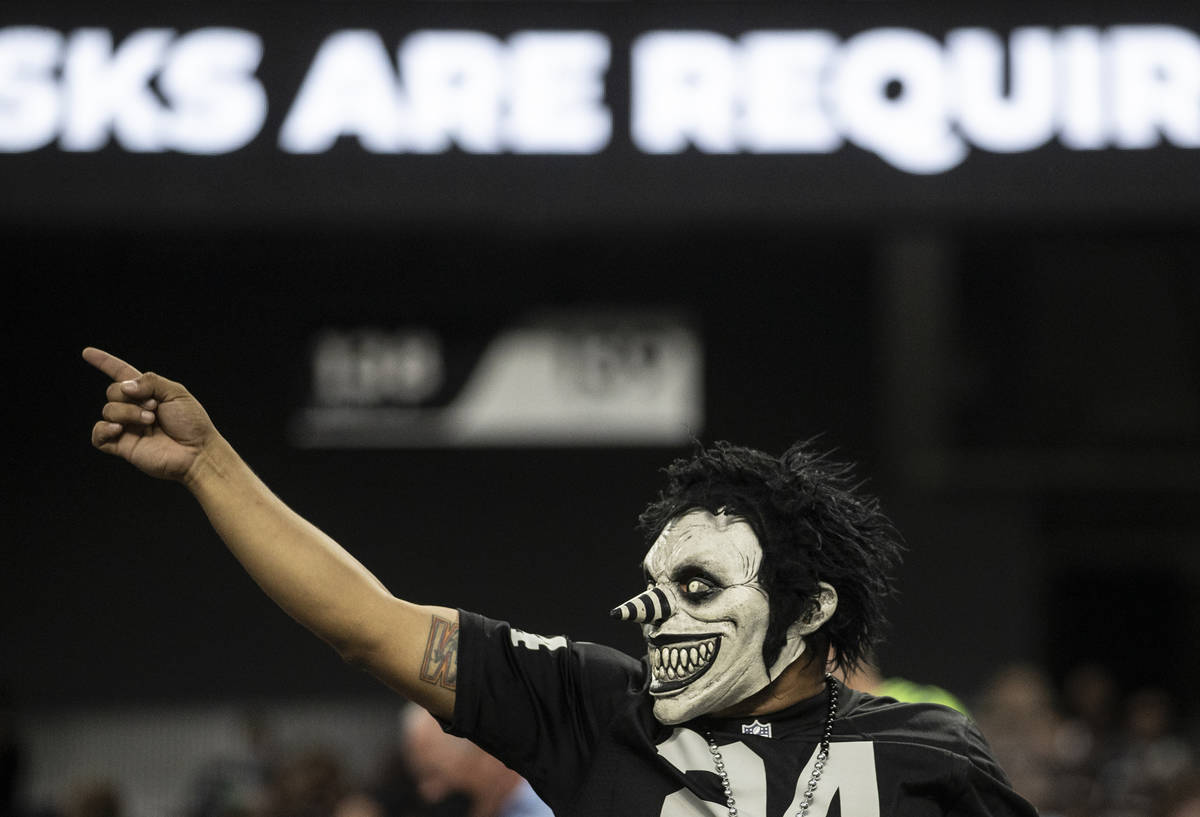 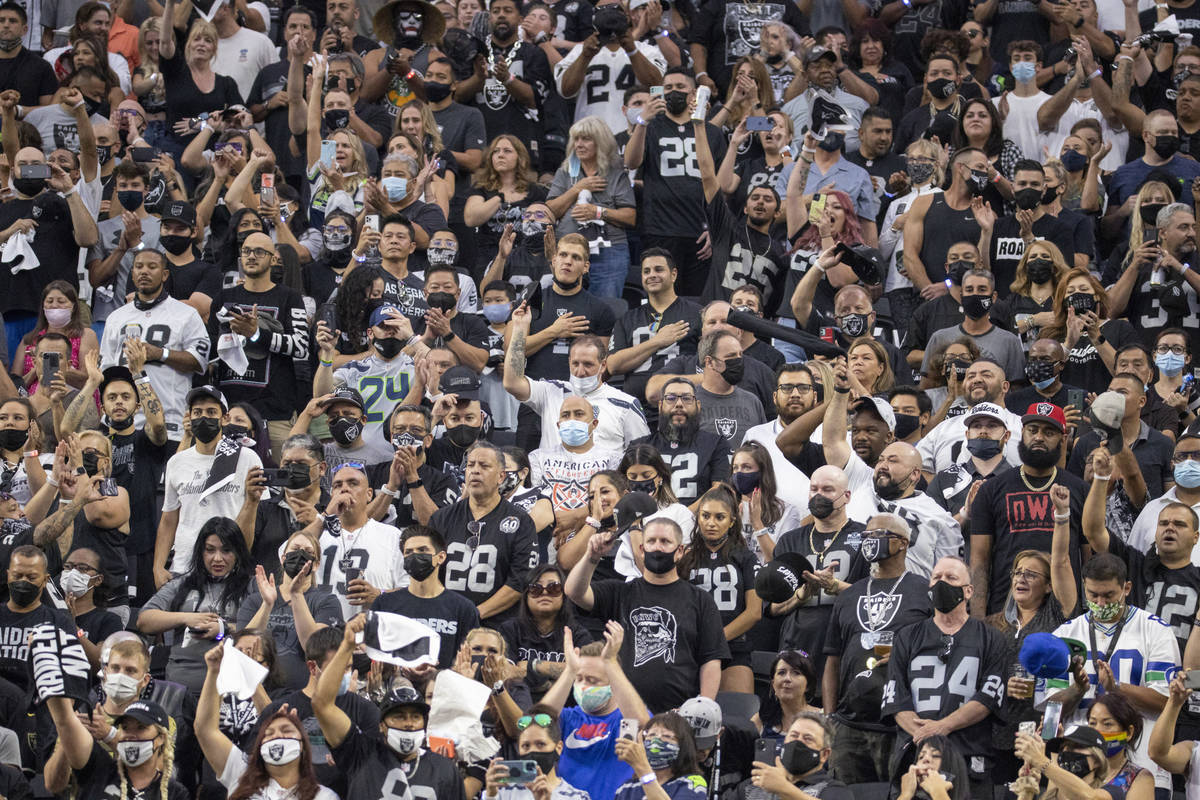 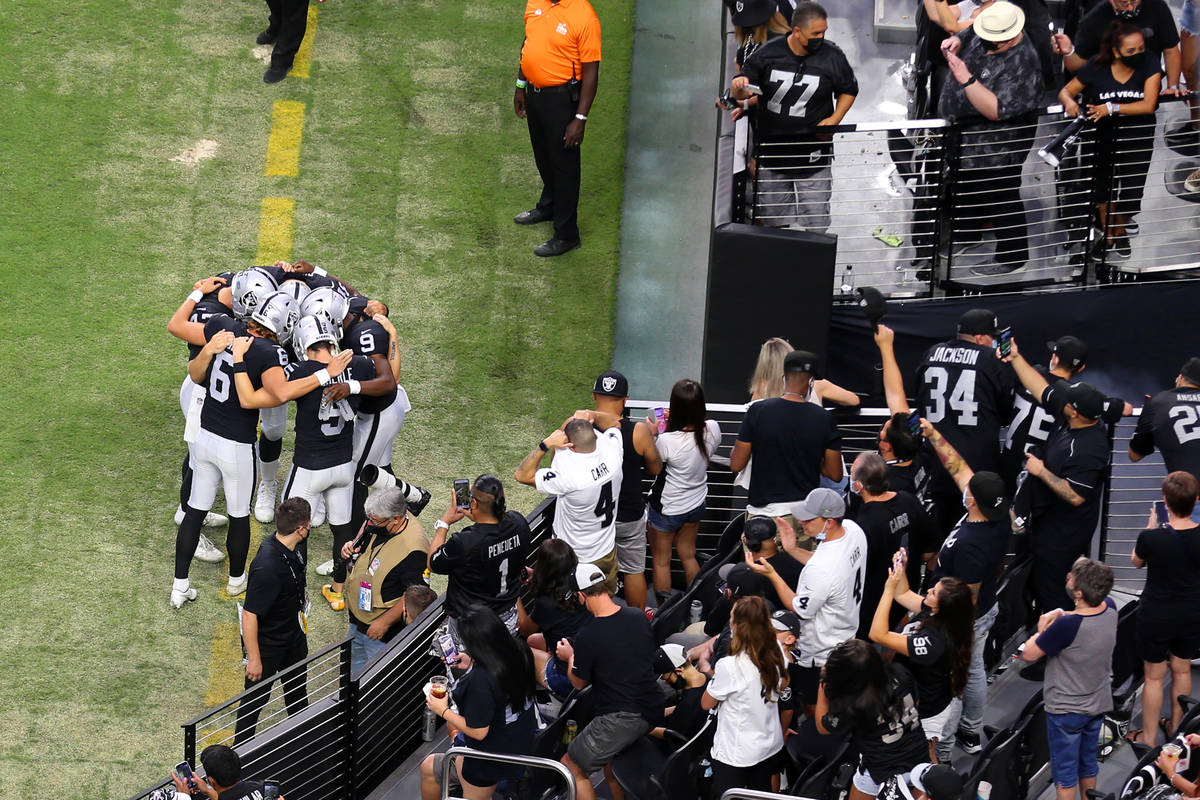 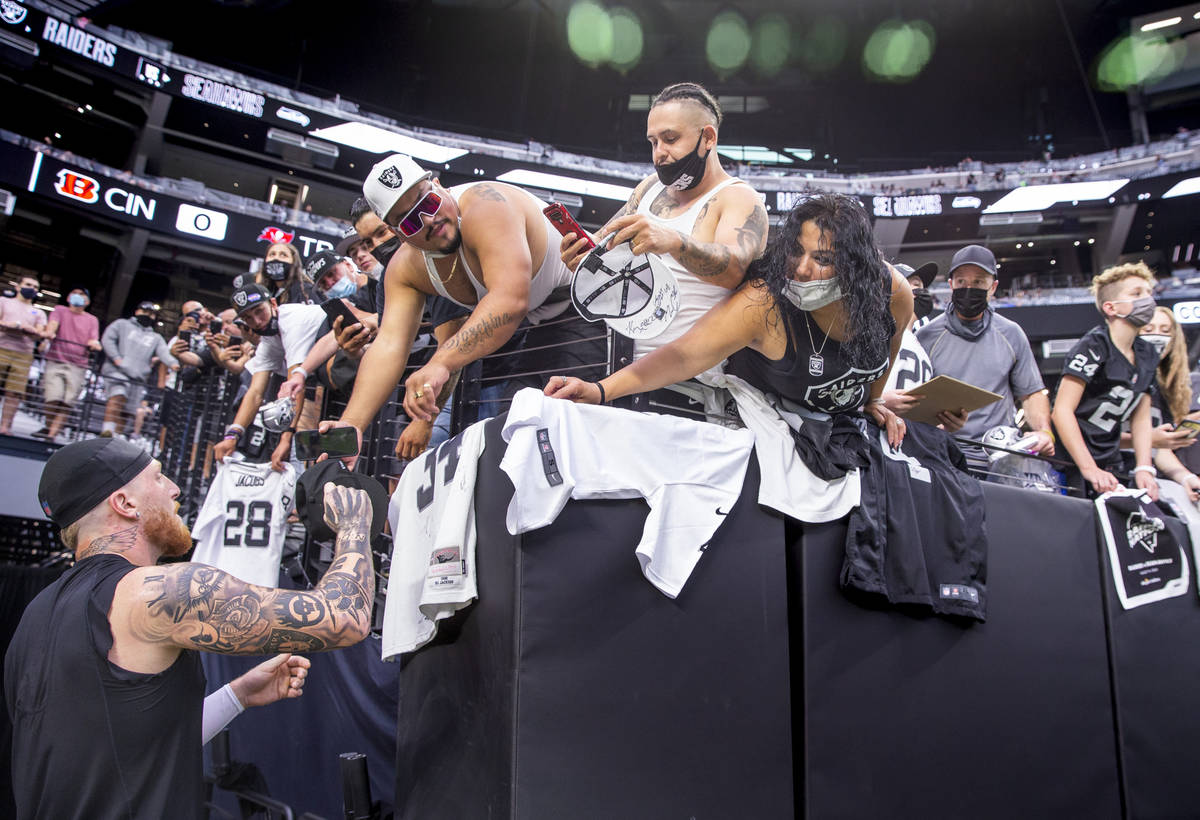 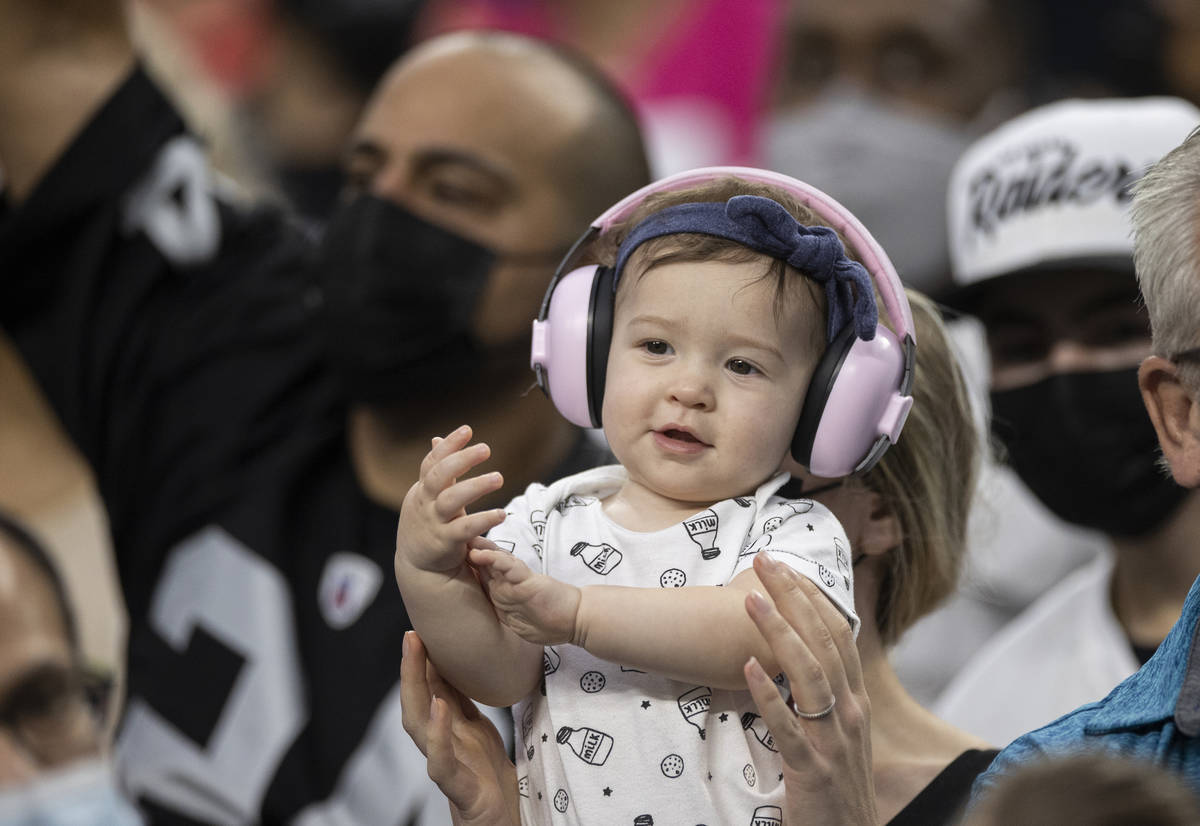 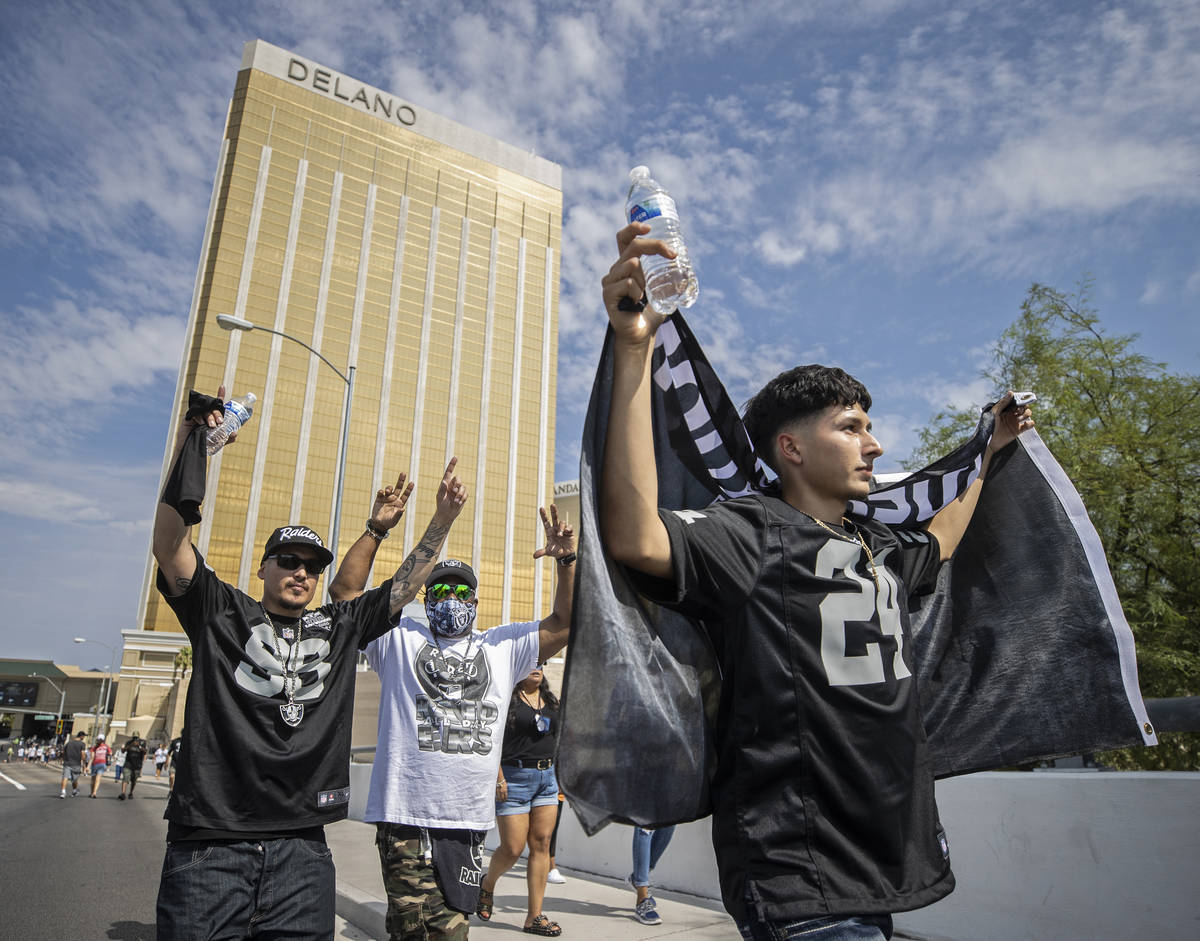 Raiders fans make their way to Allegiant Stadium before the start of an NFL preseason football game against the Seattle Seahawks on Saturday, Aug. 14, 2021, in Las Vegas. (Benjamin Hager/Las Vegas Review-Journal) @benjaminhphoto 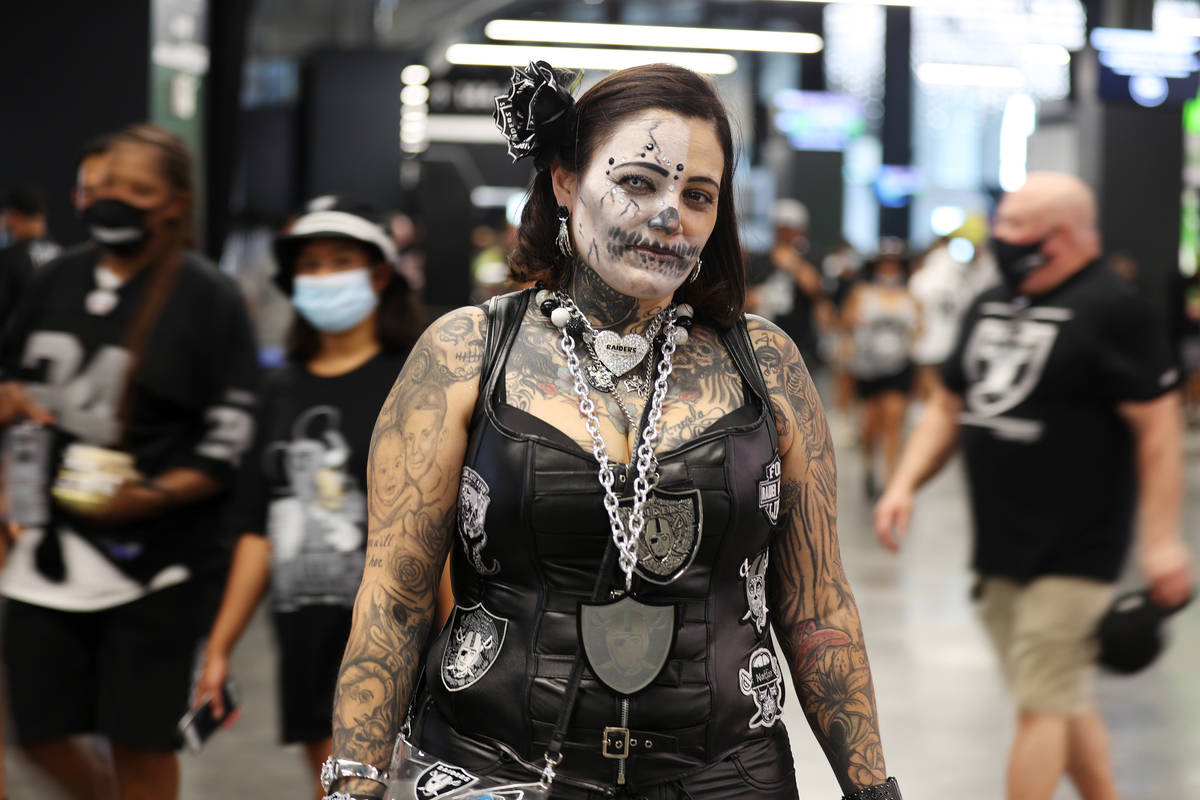 Angela Martinez, of Phoenix, poses for a photo in the concourse at Allegiant Stadium before the start of a NFL preseason game between the Las Vegas Raiders and Seattle Seahawks, in Las Vegas, Saturday, Aug. 14, 2021. (Erik Verduzco / Las Vegas Review-Journal) @Erik_Verduzco 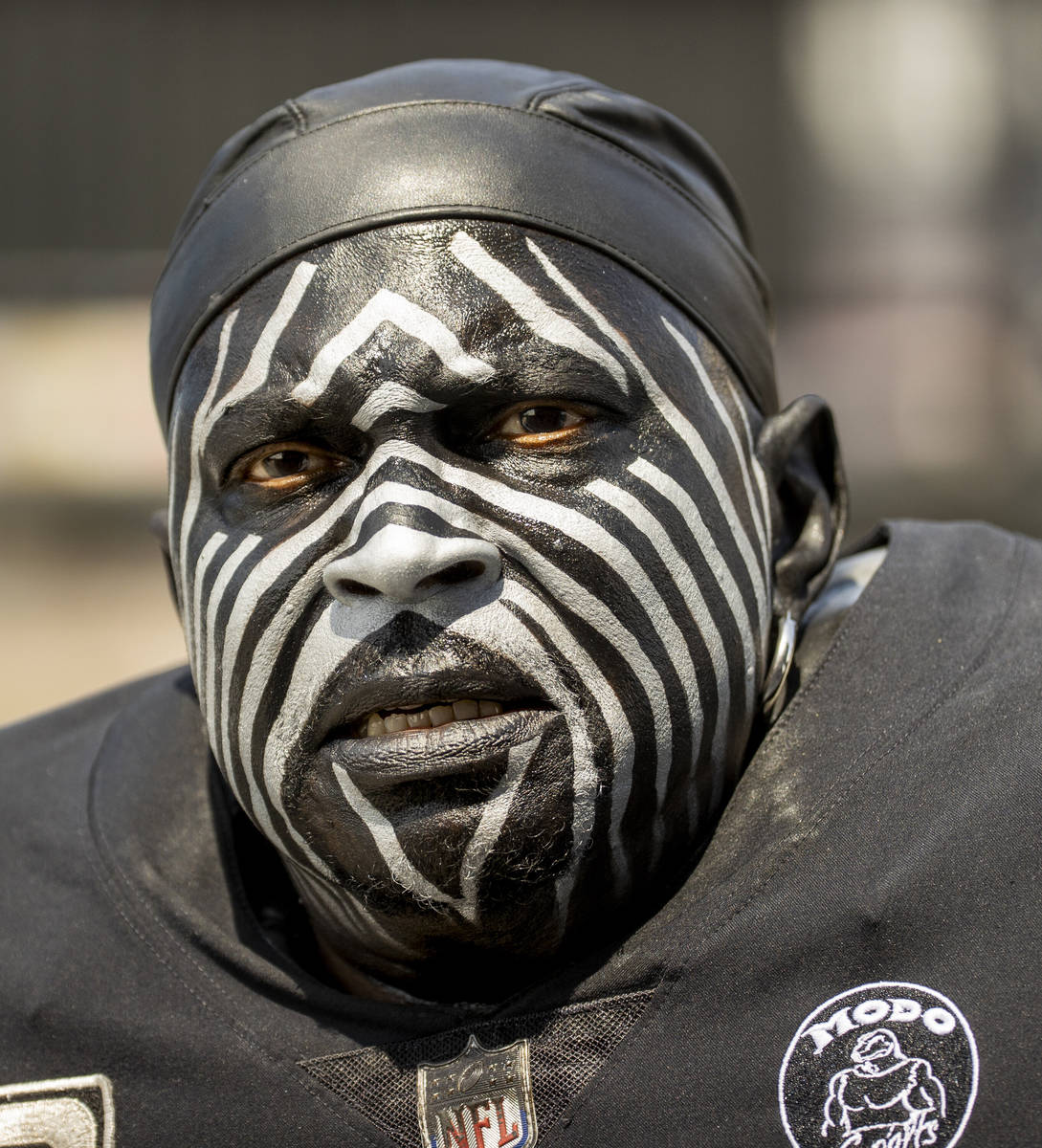 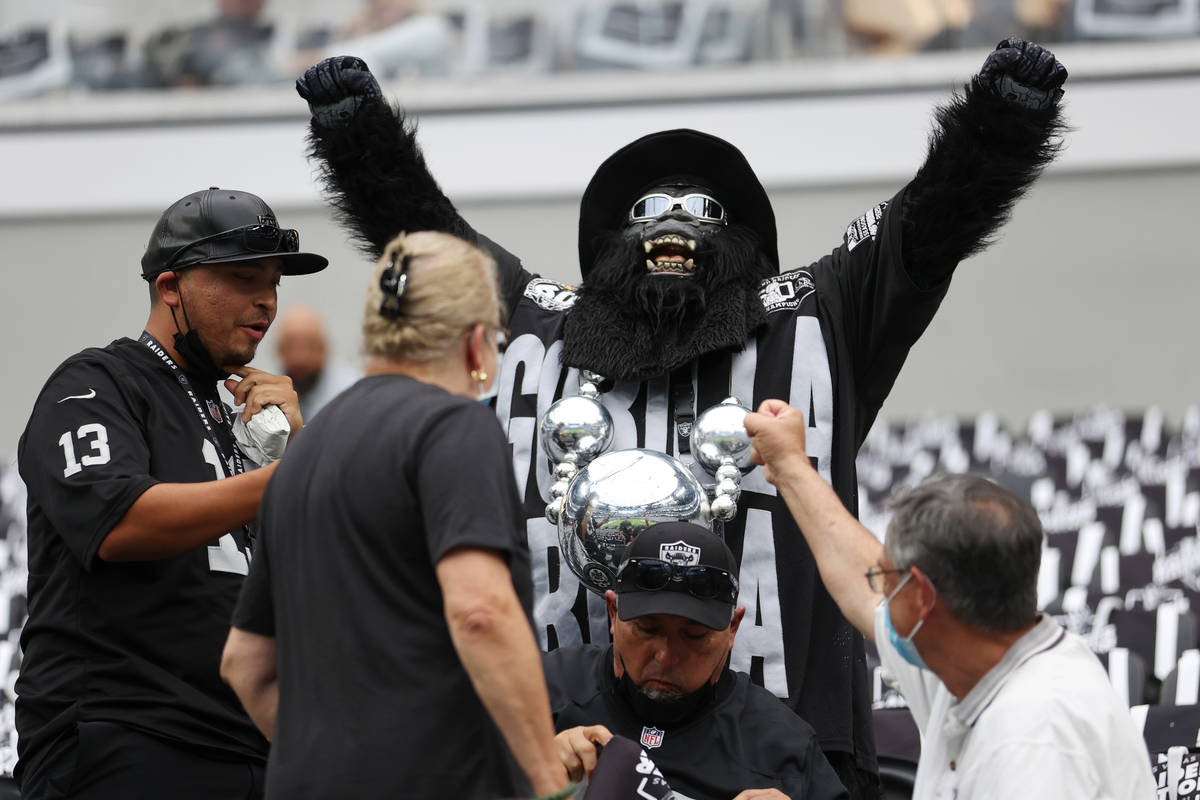 Gorilla Rilla raises his arms after making it inside of Allegiant Stadium before the start of a NFL preseason game between the Las Vegas Raiders and Seattle Seahawks, in Las Vegas, Saturday, Aug. 14, 2021. (Erik Verduzco / Las Vegas Review-Journal) @Erik_Verduzco 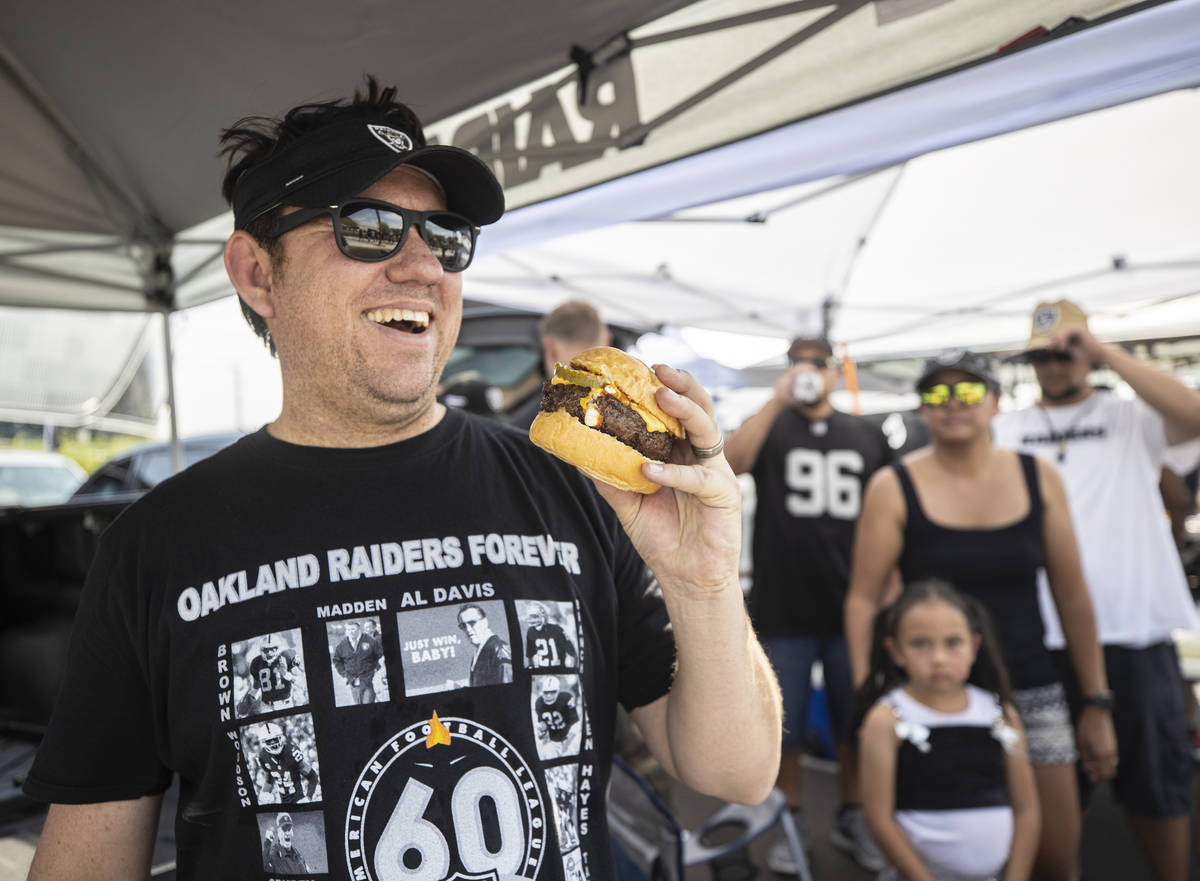 Just as soon as a line of dignitaries cut the ceremonial ribbon signifying the official opening of Allegiant Stadium, fans rushed to get inside the $2 billion facility for the first time.

Fans made their way to Raiders owner Mark Davis, who was in the plaza area where the ceremony took place. He high-fived fans and signed a couple of autographs for the Silver and Black faithful before leading a herd of them inside.

For Davis, the opening was a long time coming, as he stood by his vow that he’d not attend games at Allegiant Stadium until fans were allowed, skipping the entire 2020 season.

Davis said he’s most happy for fans to finally be able to take in a Raiders game, live in Las Vegas.

“I’m happy for the Raider alumni, the Raider fans, all the people that helped build this,” Davis said. “People in Las Vegas, the laborers that worked through a pandemic to get this done on time and on budget … This is the moment that we’ve all been waiting for.”

One notable Raiders fan made his way to Allegiant Stadium Saturday, in full garb, despite the 106 degree heat. Mark Acasio, better known as Gorilla Rilla, was among the first fans to step inside the facility.

In full costume, Acasio had fans of his own, being hounded for photos by others inside the stadium.

Acasio, who lives in Oakland, California, has seats in the new Black Hole, the south end zone of the stadium, where he will be all season. He is looking to continue the long tradition of one of the NFL’s most loyal fanbases.

Sammy Alonzo traveled from Albuquerque, New Mexico, and was one of the first fans to line up outside Allegiant Stadium.

Alonzo goes by “Raider Penguin,” decked out in a Silver and Black version of the Batman villain the Penguin. The president of the Albuquerque chapter of the Black Hole said he was going to get emotional when the stadium filled up with fans.

“I’m probably going to cry,” Alonzo said. “It’s a beautiful new home. I love it. I already took the tour, but it’s going to be different when the guys take the field.”

Alonzo plans to be a regular at home games, whether it be inside or outside the 65,000-seat facility. “All the time,” Alonzo said. “If we’re not in there, we’ll be out here tailgating.”

With the mask mandate pushed throughout the stadium via signage, for the most part fans adhered to the face-covering rule. There were a smattering of fans going prolonged periods without masks. But if an usher or stadium employee saw someone maskless, they’d tell them to mask up.

Wynn Field Club security was especially adamant about customers wearing masks, alerting clubgoers if their masks were down for more than a drink or a bite to eat.

Clark County Sheriff Joe Lombardo, who was part of the ribbon-cutting ceremony, said he’s excited for fans to finally be able to attend games in the stadium.

That said, with Raider Nation having a notorious reputation, he hopes they behave in their new home.

“We’ve come a long way with COVID and the effects that it had on last year’s season,” Lombardo said. “It’s a fantastic deal to see the fans finally get into the stadium. … It’s interesting to see all the costumes, too. Bringing back the old fans of the Raiders. But, hopefully, they’re going to be a lot more docile here in Las Vegas.”