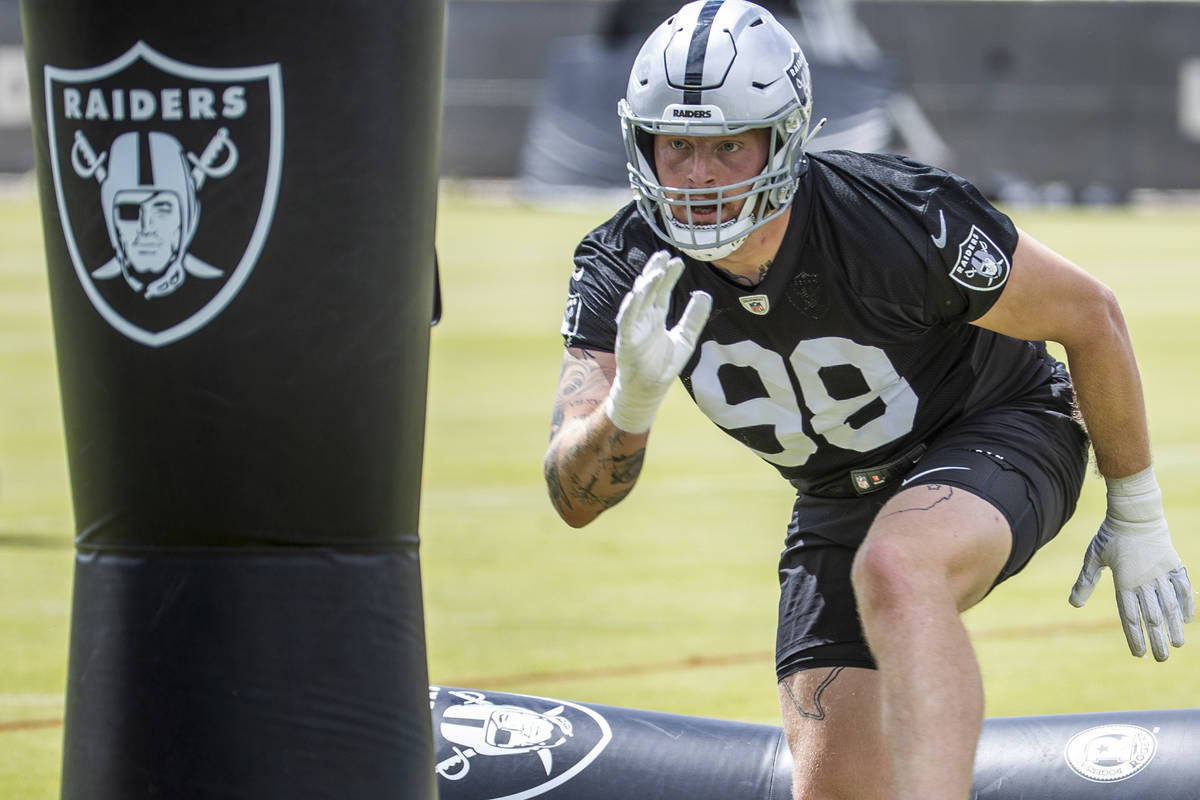 With just over four weeks remaining until the start of training camp, the Raiders are on break. But that doesn’t mean their fans don’t have plenty of questions, such as the makeup of the roster, defensive schemes and rookie linebacker Divine Deablo.

Here is a sampling of what landed in this week’s Raiders mailbag:

tommyG (@_SomeBodyNoBody): Which second- and third-year players looked like they put the work in during the offseason?

Vincent Bonsignore: From the get-go, second-year wide receiver Henry Ruggs and third-year defensive end Maxx Crosby looked to be in excellent shape during OTAs. Both figure prominently in the Raiders’ plans.

Crosby is intriguing as we didn’t learn until after last season that he had been dealing with a pair of issues that required postseason surgery. Coupled with the fact that he played nearly 200 more snaps in 2020 compared to 2019, there is an argument to be made that his falloff in efficiency last year was in part because of injuries and in part because he played too many snaps.

The addition of Yannick Ngakoue should mean fewer snaps for Crosby, and the Raiders believe a reduction in playing time could make him more effective. Coupled with an offseason regimen that has left Crosby in tremendous physical condition, don’t be surprised if he has a bounce-back season.

Ruggs looked stronger and more explosive during OTAs than he did last season, and Raiders quarterback Derek Carr touched on that in an exclusive interview with VegasNation.com. The Raiders need Ruggs to be more productive in his second season, and by all accounts, he has put in work in during the offseason to be in a better position to do so.

Central Valley Raider (@Raider_Familia): Could the Raiders play a little 3-4 defense and have Nicholas Morrow and Nick Kwiatkoski as MLB and Cory Littleton and Javin White as OLB to add more speed??

VB: It’s a little too early to talk about what players will be involved, exactly, but as new Raiders defensive coordinator Gus Bradley showed during his time with the Chargers, there were plenty of times when he utilized a scheme featuring three down linemen flanked by two linebackers rushing off each end. Bradley also used the middle and weakside linebackers and a safety just behind the down linemen in that formation. So yes, that formation will be part of the Raiders’ defensive playbook.

RJ Crowley (@RJ_See Any internal): Has there been any internal “non-support” for Carl Nassib expressed?

VB: Both publicly and privately the Raiders have expressed nothing but support for Nassib.

Freedom Over Safety (@HangingChad128): What’s the word on Divine Deablo’s reason for being out of OTAs? Gruden hinted at a possible injury, saying that he hopes he’s good by training camp.

VB: Like all NFL teams, the Raiders are not obligated to disclose injuries this time of year. That said, Gruden did suggest that Deablo was dealing with some sort of physical issue and that the hope was he’d be OK when training camp opened. Also, Deablo was present throughout OTAs and minicamp, taking part in all non-field activities.

LVRaiderMarcus (@MrM_7): What moves can you anticipate the Raiders making between now and the start of the season?

VB: The recent signing of veteran linebacker Darron Lee addressed the inexperience issue at linebacker behind the three starters, as did the signing of veteran offensive tackle Sam Young for that group. For now, it looks like the roster is fairly set heading into training camp. But like all teams, the Raiders are always looking for better options.