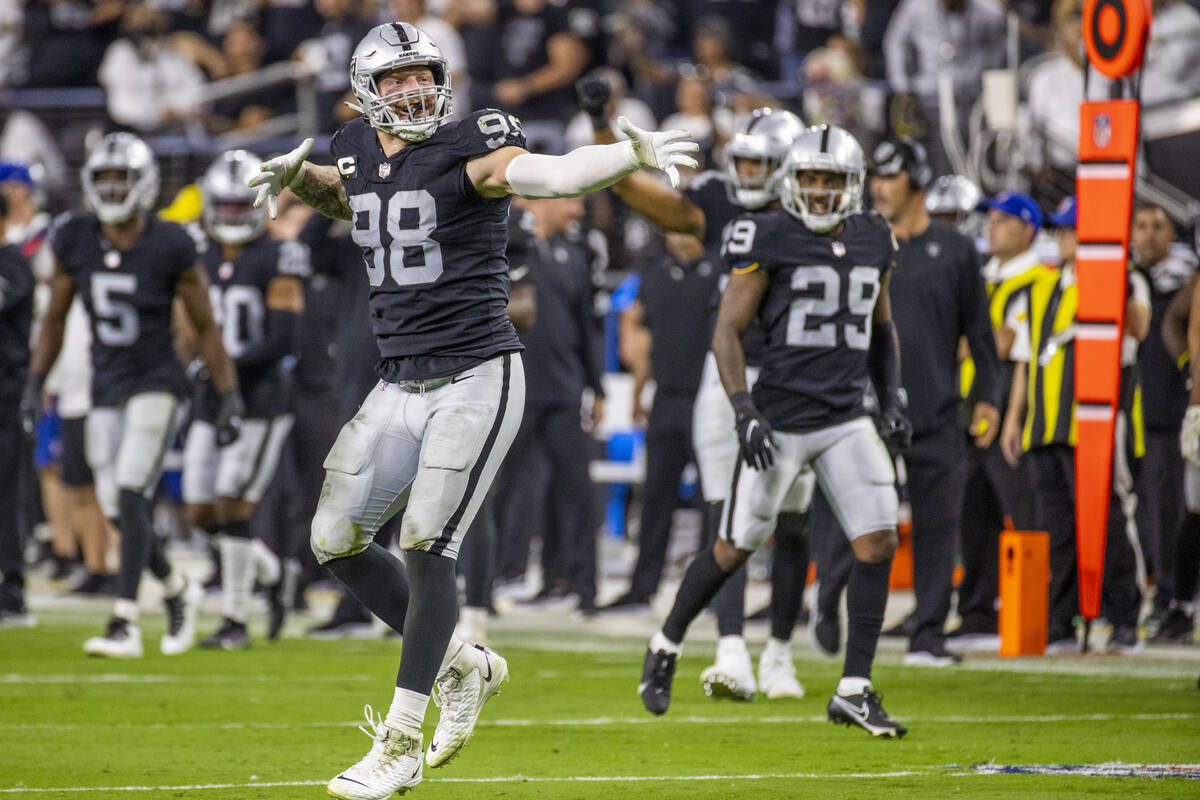 Maxx Crosby and Yannick Ngakoue became friends almost immediately after Ngakoue signed with the Raiders in the offseason.

The bookend defensive ends aren’t likely to get any of the Baltimore Ravens’ offensive players to join their clique anytime soon after abusing them throughout Monday night’s 33-27 overtime victory at Allegiant Stadium.

Crosby had two sacks and wreaked havoc in the backfield. Ngakoue brought pressure from the other side of the line before leaving the game with a hamstring injury.

In the end, their efforts helped keep the Raiders in the game long enough to pull out a dramatic victory.

“Maxx backed it up,” Raiders coach Jon Gruden said. “You do it day after day and then get an opportunity in prime time to show where you’re at.”

Crosby made six total tackles, and Ngakoue had four against his former team.

While Crosby’s efforts consistently stood out, Ngakoue showed up in key spots.

He got pressure on Ravens quarterback Lamar Jackson and hit his arm on a key third down play in the third quarter, then followed a pulling tackle and blew up a running play in the backfield on another third down.

They weren’t alone in making plays for a much-improved defensive front. Carl Nassib made a strip-sack to set up the game-winning score. Quinton Jefferson and Darius Philon swallowed up space in the middle of the line and made life difficult on the Ravens offensive line.

“We’ve been working together, and we really take this job seriously,” Crosby said. “You see all these guys making plays. We’ve been emphasizing the little details in practice, and you saw it tonight. It was a good start, and now we have to carry it over on a short week in Pittsburgh.”

It wasn’t the only odds they overcame.

Baltimore coach John Harbaugh was 81-0 when leading a regular-season game by 14 or more points, a lead the Ravens built in the second quarter on Lamar Jackson’s touchdown pass for a 14-0 lead.

Baltimore had won 98 straight regular-season games when leading by 14-plus points. This was their first loss in any such game since losing to Cincinnati in 2004.

Tight end Darren Waller was targeted 19 times by Derek Carr, finishing with 10 catches for 105 yards on his 29th birthday.

It was the most targets for a tight end since Aaron Hernandez of the New England Patriots in 2012 and the most for any Raiders player since Jerry Rice in 2002.

“We threw the ball almost 60 times, and if you threw it 60 times, you’d probably target him 29 times,” Gruden said. “He’s the best player I’ve ever coached. We’re going to try to get him the ball.”

Defensive tackle Gerald McCoy was carted off the field in the fourth quarter with a knee injury and didn’t return.

The team didn’t provide an update after the game. McCoy was playing in his first game since 2019 after suffering an injury in training camp with the Dallas Cowboys last season.

Denzelle Good left the game with a knee injury in the first quarter. He briefly returned to action in the second quarter, but was ruled out for the rest of the game after two plays. Jermaine Eluemunor replaced him at left guard.

Running back Josh Jacobs battled a toe injury all week, then was ruled questionable because of illness.

He played despite being worked on by the athletic trainers on several occasions. He finished with 10 carries for 34 yards and scored two touchdowns.

Preseason star Trey Ragas was activated from the practice squad before the game as an insurance policy.