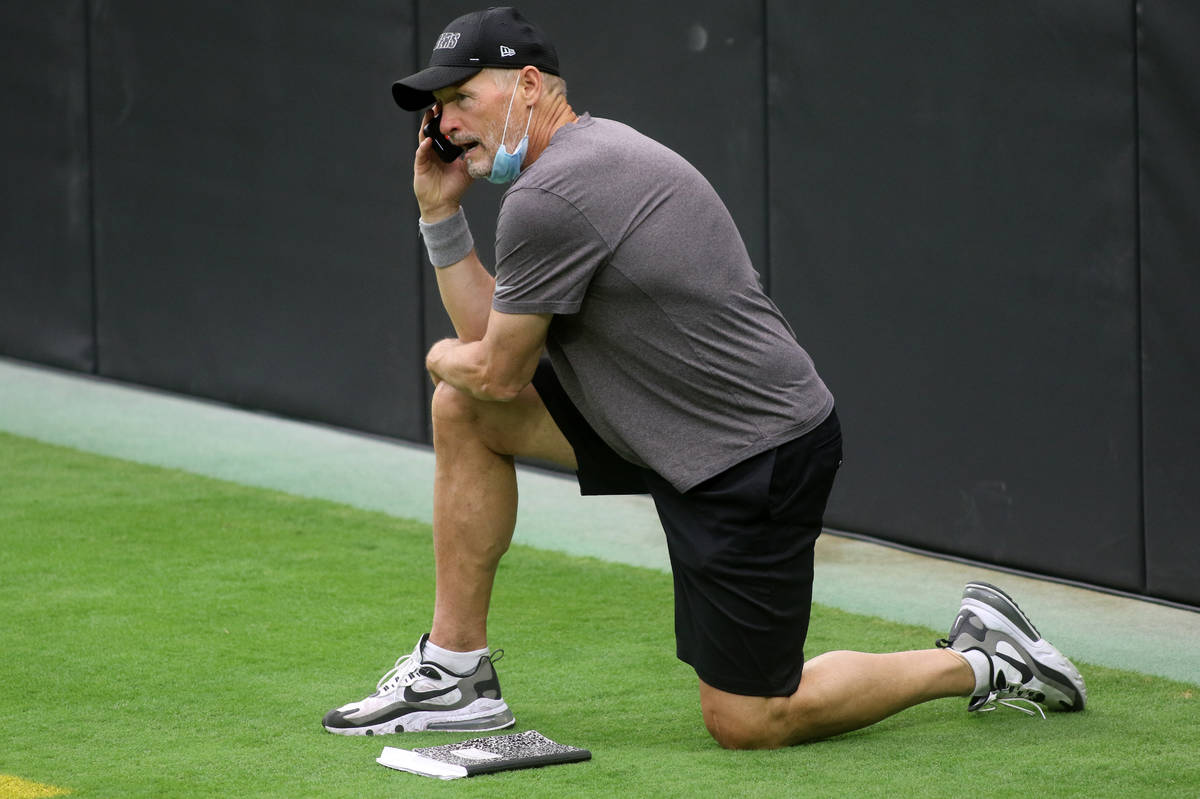 MOBILE, Ala. — Raiders general manager Mike Mayock is in Mobile this week for the Senior Bowl, and with the NFL scouting combine canceled and the offseason still up in the air, this becomes a critically important part of the Raiders’ draft process.

Now in his third season, Mayock took time on Tuesday to reflect on last season and what might be ahead for the Raiders in a question and answer session with the Review-Journal’s Vincent Bonsignore.

VB: The quarterback market this offseason is shaping up as one of the craziest in years, with some big names potentially getting traded. Is it a market you guys might potentially dabble in?

Mayock: I think every year my answer will be the same, regardless of how many players are out there at any position, and that is you have to do your due diligence. I think Jon (Gruden) and I come from the same school on that. You want to know, at any position, which players might be available via trade. Just like you do in free agency. … And you’re always trying to upgrade. I just think it’s incumbent upon every organization to do that at every position.”

VB: That said, Derek Carr was a top 10 quarterback overseeing a top 10 NFL offense. He has two years left on his contract, none of which is guaranteed. Have there been any discussions about extending Carr’s contract?

Mayock: First of all, I think the most important point is that Derek did have an exceptional year. I think he’s gotten better each year with Jon, which is kind of exciting to us internally. As far as any kind of contract conversation, we deal with that directly with the players only.

VB: Is extending Derek something you are open to?

Mayock: I think we’re always interested in keeping good players for as long as we can.

VB: COVID-19 really did a number last year on the draft and free agency process. The same might be true this year. Any takeaways from last year that you can apply this year?

Mayock: We did a thousand zoom meetings just like everybody else, and they were pretty intense. We felt like we got to know the kids pretty well. But there’s no substitute, in my mind, for face-to-face meetings. That’s why it’s going to be hard again this year.

I think the more time you get, whether it’s free agency or the draft, the more time you get face to face, the more time you can spend with people that coached these kids, the more time even with the equipment managers, trainers, secretaries in the building, just to try to build a consistent portfolio of who each kid is. Just keep checking boxes. And we lost a lot of that last year. And to me, as an old-school guy, that’s important. And all of us have to continue to do a better job.

VB: In retrospect, how much did not having a regular offseason program impact that process and could it again this year?

Mayock: My biggest concern, in all of this, is not just us getting out on the road doing jobs, it’s also the lack of development once you draft the kids if there is no offseason. I thought that was a bigger part of it last year.

If there is one takeaway that I personally had off our draft last year, it was that on one hand, we were able to get all seven of our draft picks within the first four rounds, which I think was great for a COVID-19 year. On the other hand, we had a couple of guys making position changes, and I thought we might have some offseason stuff but that never happened.

So basically, I think the guys that were trying to play different positions were really hamstrung. It was a hard enough year to come in at your own position, and I’m not complaining because the whole league was dealing with it. But if I had to smack myself over my head, that would have been my point.

It’s difficult to say you’re going to draft Lynn Bowden in the third round and take a quarterback/slot back and make him a running back. I think he’s got the talent and skill-set and all those things, but in a COVID-19 year to learn protections and everything else, it’s really a difficult task.

And to a lesser degree, the same true of Amik Robertson, who was always an outside corner in college. So when you come inside in our defense and play nickel, it’s a completely different world. Not just the angles and the way you’re looking at an offense but also you’ve got to combat a lot of big people because you have run fits inside. Again, I know Amik can do it, but unfortunately it just wasn’t going to happen last year.

VB: You lost three games over your last seven games after the offense gave the defense the lead with under two minutes to play. Is it an oversimplification to say that, but for a better defense, the Raiders’ season would have ended up much differently?

VB: Given the youth of the defense and the new players being added, did the lack of an offseason stunt the development of the defense?

Mayock: I hate making excuses. We just didn’t play well enough. We were really young on the back end. We’ve got some talent back there, but we aren’t playing to the level we need to. I think a lot of it is being so young, not having the offseason and having several guys miss time.

Jonathan Abram missed several practices with COVID-19 and injuries, and then you go out and play on Sunday. You’re effectively a rookie and you don’t practice during the week, and he did that several times where he played on Sunday without having any practice.

Same thing with Damon Arnette. Early in camp, when he was healthy, he was really good and we were excited about what he was, physically. And, of course, he ends up suffering a couple of concussions and COVID. So it was a tough year for a lot of our young guys. No excuses, we have to get way better, and that’s going to be a priority for us.”

VB: You mentioned Damon Arnette, how big is this offseason for him?

Mayock: I think it’s a huge offseason for Damon. What he needs is the consistency of nutrition, a weight room and a workout regimen. And he needs to apply himself religiously. We have no problems with his quickness, with his ability to cover and his innate competitiveness. It’s the other things. Because when things come easy to you, you don’t always work on the other things. And now Damon really has to focus on the weight room, the nutrition and the daily regimen of getting himself ready for camp.

VB: Cory Littleton’s play improved late in the season, but can you put a finger on what caused his struggles the rest of the season?

Mayock: I think he’s a guy that can run to the football, can cover, and he was a tackling machine in L.A. We asked him to do some things, some nuanced things, that he really wasn’t used to. And I think when players start to think a lot, sometimes they slow down. That’s not a shot at him or our system, it’s just that he came into a new system and we were asking him to do some things differently than he’d done them the last four years.

I think as he played more consistently every week, without injuries, and had more practice time, he played better. He started coming downhill, taking on blockers. And that’s not who he’s ever going to be, a downhill thumper. That’s not him. But, man, he’s so athletic. We think there’s a lot more there that we’re going to get.

VB: In new defensive coordinator Gus Bradley, defensive backs coach Ron Milus and linebackers coach Richard Smith you’ve added coaches with a long track record of teaching and development. Was that a priority, especially for such a young defense?

Mayock: For any organization, you talk about draft and development. That has to be an organizational commitment. What’s the plan and how do we get there? And the personnel department has to be tied at the hip with the coaching staff.

I’ve known Gus for 20 years, but it’s been fun to get to know him a little differently. So we’ve been on the phone, we’ve been talking about what every position on his defense demands, what body types fit it the best.

I was on the phone over the weekend with Ron Milus and Richard Smith talking about every single guy they’ll be coaching, just giving them more background on these young men and what they need, and those guys giving me background on what they’re going to be looking for in the draft and free agency.

It’s early, but I think Gus and his guys have a system they believe in, and I think it’ll be consistent. The philosophy will be consistent for the players. It’s already been fun.

VB: Nelson Agholor had a breakout year. But his contract us up. Is he a priority to bring back?

Mayock: We love Nelly, he’s got an amazing work ethic and we’d love to have him back.

VB: What is your assessment of the rookie season of Henry Ruggs?

Mayock: I thought Henry was exactly what I thought he’d be. He did make a difference for our offense. He did flash. He still has a long way to go. And we knew that when we drafted him.

I think the specific areas we’d like to see improvement in are route running, especially getting in and out of those breaks where you feel his speed. You have to feel the 4.2 or it doesn’t matter what you ran. He’s got to do a great job of becoming more and more of a student and learning how to get in and out of breaks and run routes so that you feel his speed.

VB: Trent Brown has played 16 games in two seasons. He’s under contract for two more years, but none of it is guaranteed. Is he still in the plans?

Mayock: He’s under contract and when he’s healthy he’s dominant. And you’ve got to juxtapose that with his inability to play, week to week, over a two-year period. We’re excited about the player, but we’ve got to get a more consistent player. And obviously, we’re talking about everything right now. We think he’s the best right tackle in the league when healthy.