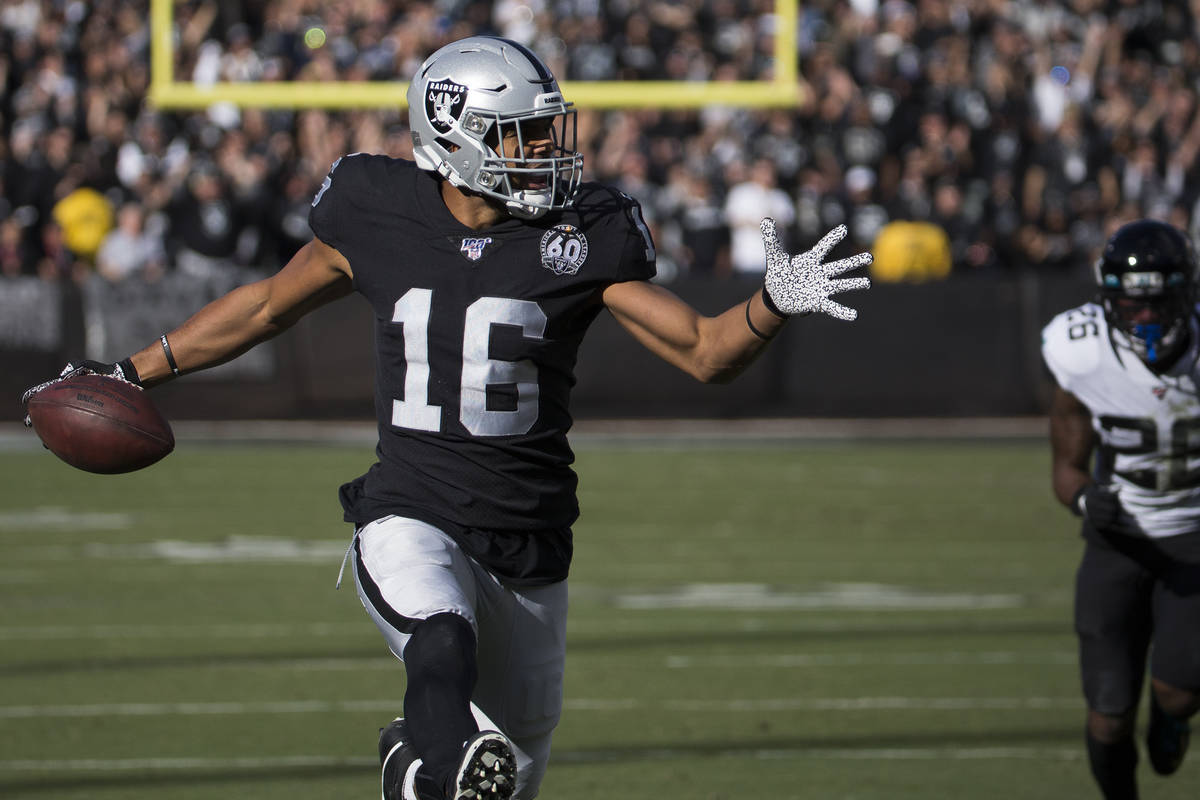 Raiders general manager Mike Mayock isn’t sure when injured wide receiver Tyrell Williams is going to practice or play. But he’s confident the team’s reconfigured receiving corps can carry on without him.

“Tyrell is down for whatever period of time,” Mayock said. “But I think the rest of the guys see it as an opportunity.”

Williams has a torn labrum and did not practice Tuesday. Mayock said Williams “will be ready when he’s ready.”

In the meantime, the club will look to Henry Ruggs, who was drafted in the first round, and Bryan Edwards, who was taken in the third. Veterans Nelson Agholor and Zay Jones also are making an impression.

“They’re in as good of shape as any two players we have on our team,” Mayock said of the two veterans. “Their route running … has improved. Their concentration has been outstanding. And I think the coaches have a plan for (them). You start with those two guys and you say, ‘Wow.””

Agholor, 27, is entering his sixth NFL season, having spent his first five with the Philadelphia Eagles. He posted 700-yard receiving seasons in 2017 and 2018, but played more of a secondary role in 2019 and finished with 363 yards.

The Raiders traded for Jones, 25, midway through last season. He posted 147 receiving yards in 10 games with the team.

“(Gafford) has got one of those things you can’t coach, called speed,” Mayock said. “Ateman has done a heck of a job. He plays special teams. He blocks. He’s a big, strong kid.”

Mayock had Raiders backup quarterback Marcus Mariota atop his quarterback rankings — over eventual 2015 No. 1 pick Jameis Winston — when he worked as an analyst for NFL Network.

“I felt like Marcus took care of the football better,” Mayock said. “Plus, he had the element of being able to extend plays by using his legs. If you ask what the determining factor in that conversation was, that was it right there.”

Mayock said Mariota has been “everything as advertised” since the Raiders signed him in March. He noted that coach Jon Gruden is “rebuilding (Mariota) from the ground up.”

Mariota has been receptive to the coaching. “He’s a sponge. He’s been an absolute sponge,” Mayock said.

Raiders right tackle Trent Brown has not practiced during training camp. Mayock said Brown is “in a process with the trainers. I think we’ll see him soon. He’s looking good.”

Offensive lineman Denzelle Good did not practice Tuesday. He worked on his own on a sideline adjacent to the practice field.

Starting corner Trayvon Mullen also didn’t practice. Mayock said he thinks Mullen will be back “sooner rather than later,” but did not offer additional information on his condition.

The 24-year-old played the past two seasons for the Tennessee Titans, with whom he signed as an undrafted free agent in 2018 and recorded 40 tackles and 3.5 sacks.

Las Vegas waived defensive end Ade Aruna in a corresponding move. Aruna, 26, has not played in an NFL game.