Vegas Nation's Adam Hill and Vinny Bonsignore take a look at the Raiders running back and wide receiver depth and who they may cut on Saturday when they narrow down the roster to 53-men and Raiders offensive coordinator Greg Olson spoke with media and updated on offensive tackle Trent Brown who has missed time practicing. (Heidi Fang/Las Vegas Review-Journal) 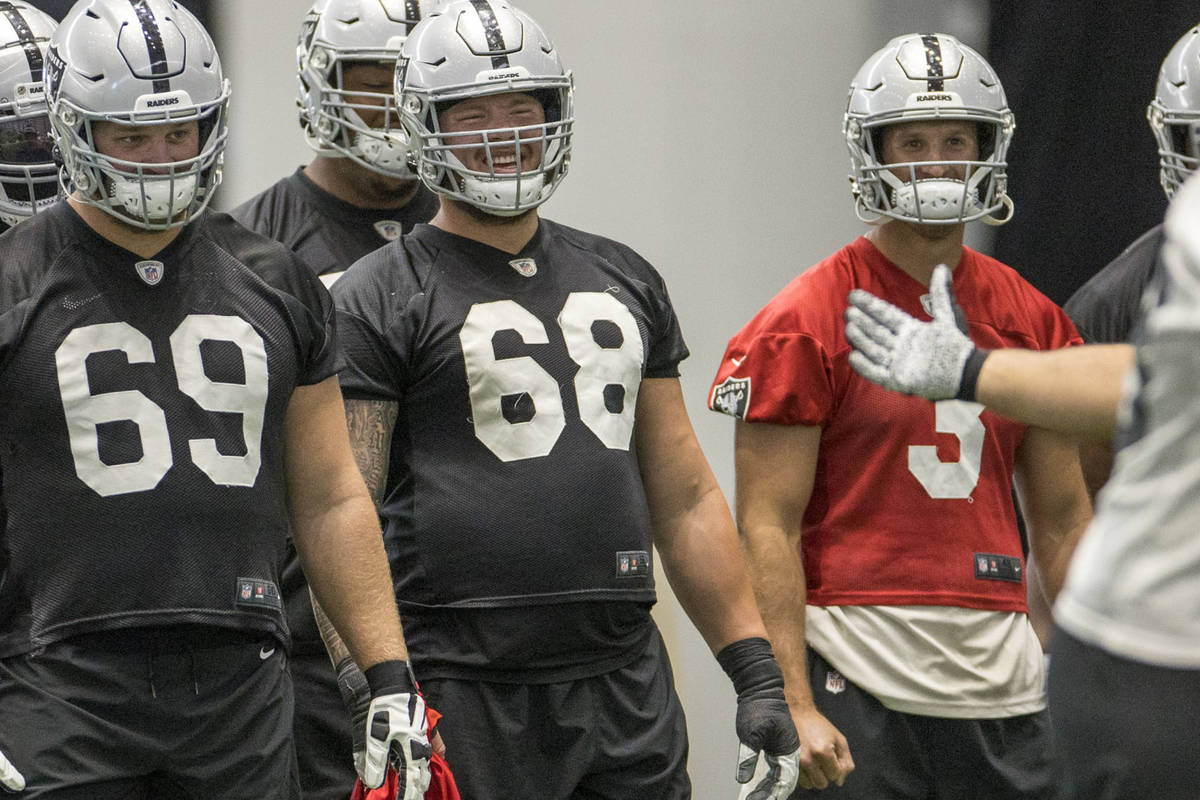 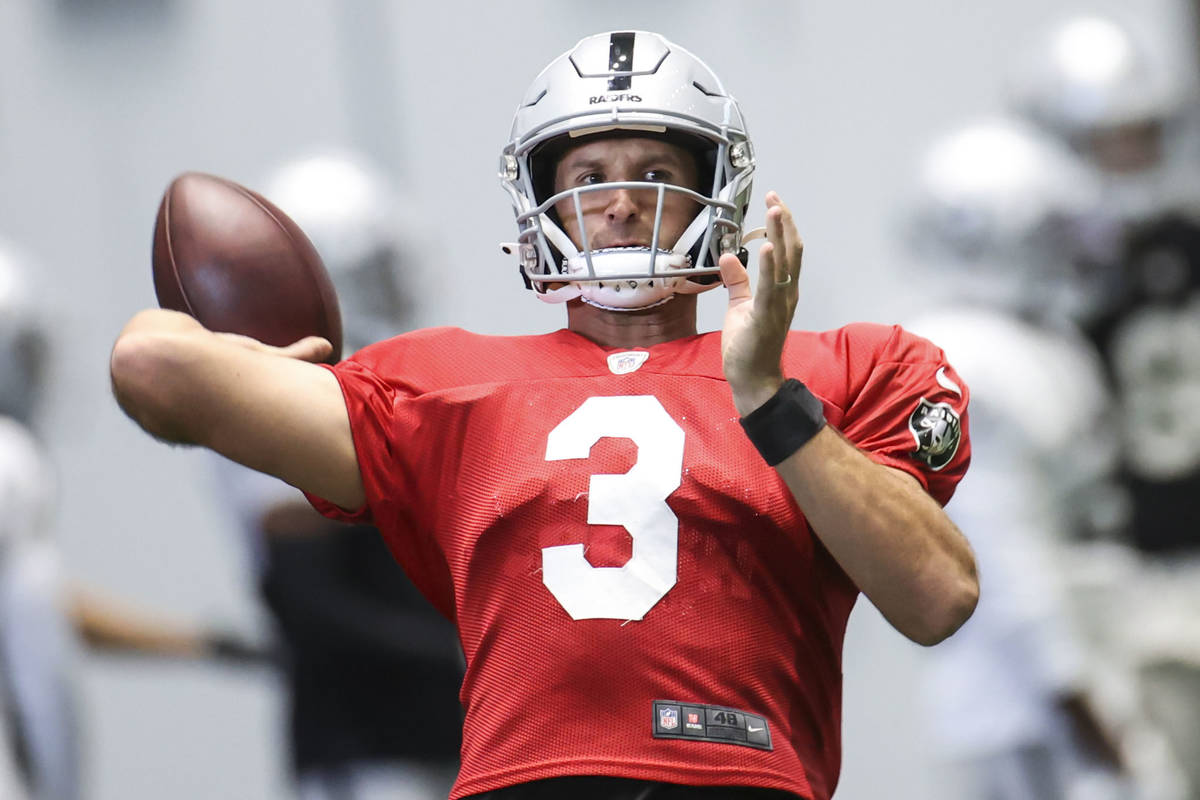 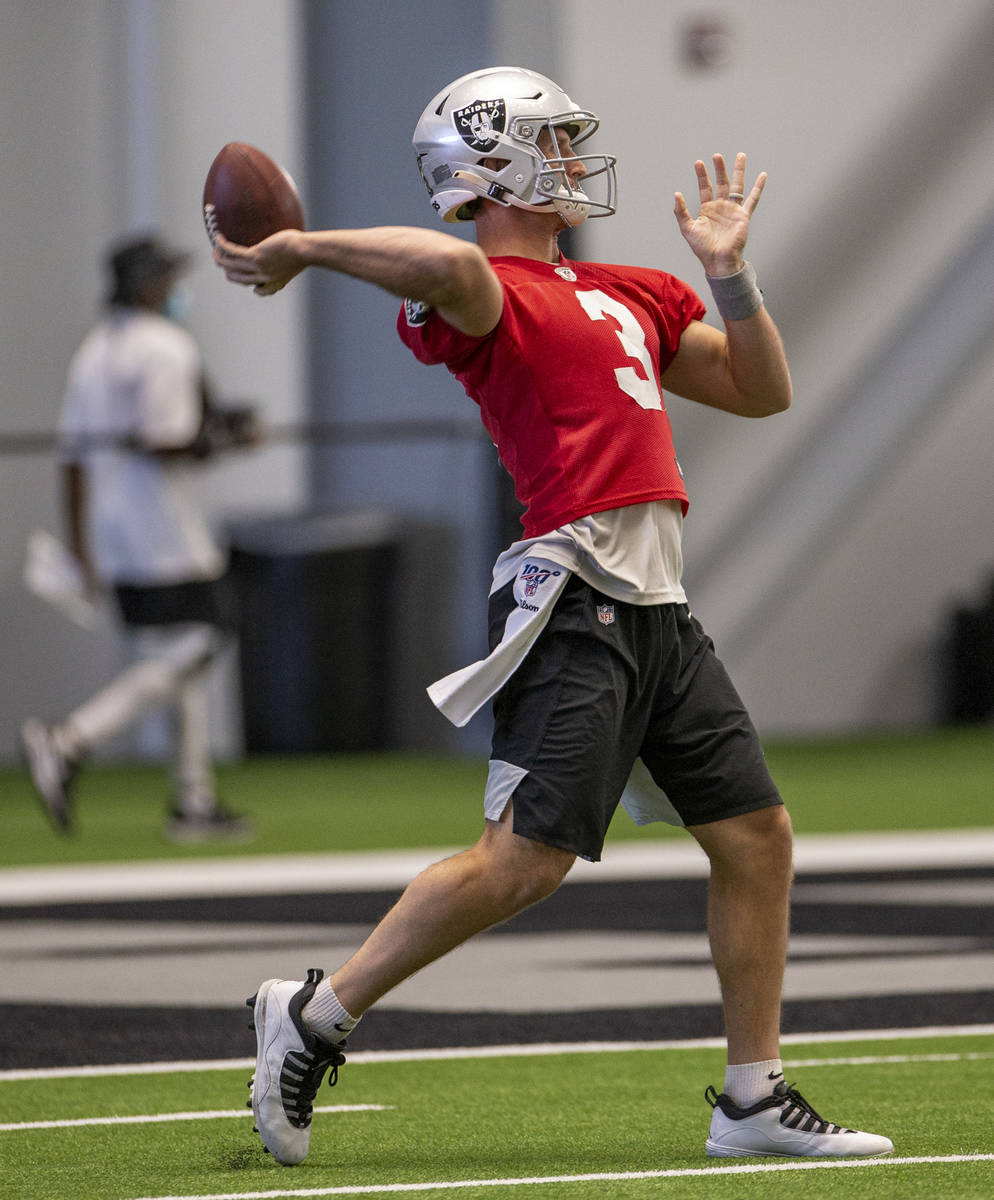 It appears quarterback Nate Peterman has made the Raiders’ opening day roster after agreeing to restructure his contract.

Peterman, 26, will make $1 million guaranteed this season. He had been scheduled to make $2.133 million under the terms of the original-round tender he signed in April, though that money was not guaranteed.

The reserve quarterback will continue to develop under the tutelage of coach Jon Gruden and offensive coordinator Greg Olson, who has been impressed with the work Peterman.

Peterman, who has yet to play a snap for the Raiders, spent last season on injured reserve and joined the Raiders’ practice squad in December 2018.

“He’s just gotten better,” Olson said. “Since the day he got here, we’ve talked about constant, never-ending self-improvement and Nate’s a great example of that. He just works very hard, he’s intelligent, he understands the system much better this season. A lot of growth from Nate Peterman. We like where he’s at.”

The fifth-round pick’s career got off to a disastrous start when he threw five interceptions in the first half of his first career start in 2017. Peterman wrapped up his Bills career with three touchdowns and 12 interceptions in eight games, including four starts.

Olson expressed confidence in the readiness of his offensive line despite right tackle Trent Brown rarely practicing during training camp.

Brown was seen in his jersey on the indoor field at the team facility Friday, but wasn’t participating in the brief portion of practice accessible to media.

“It’s never an ideal situation, but it does help he was here a year ago so a lot of the communication he’s very well aware of,” Olson said. “When he’s ready to go full-time, then we’ll bring him along full-time. Right now, we’re just making sure he’s healthy.”

While not addressing Brown specifically, Olson did say he would prefer to have every player participating.

“Every position, it hurts when you have guys missing practices,” he said. “For their own growth, but also the wear-and-tear you put on the other players that are out practicing every day.”

The position got even thinner this week when David Sharpe was traded to the Redskins. That move was made possible by a couple pleasant surprises in camp.

“Sam Young came in, one of the players we signed in the offseason, and had a very good camp,” Olson said. “That made it a little easier to make that move. We like Sam and we like the development of Brandon Parker. We felt our tackles are two of the strong points of our team when you look at Trent and Kolton (Miller). ”

Rookie receivers Henry Ruggs and Bryan Edwards are both expected to take on even bigger roles with Tyrell Williams officially out for the year.

Olson said Ruggs has been operating at the slot with Edwards often lining up as the “X-receiver” on the single wideout side of the formation, but both players are learning both positions.

He’s been happy with the results.

“Bryan’s stepped in very well since we put (Williams) on IR,” he said. “Both players have done a great job, really integrating themselves in our offense and they’re both extremely intelligent, so we’re able to move both of them around.

”Sometimes you’ll see Henry at the single receiver position, sometimes he’ll be in the slot, and same thing, vice versa with Bryan.”