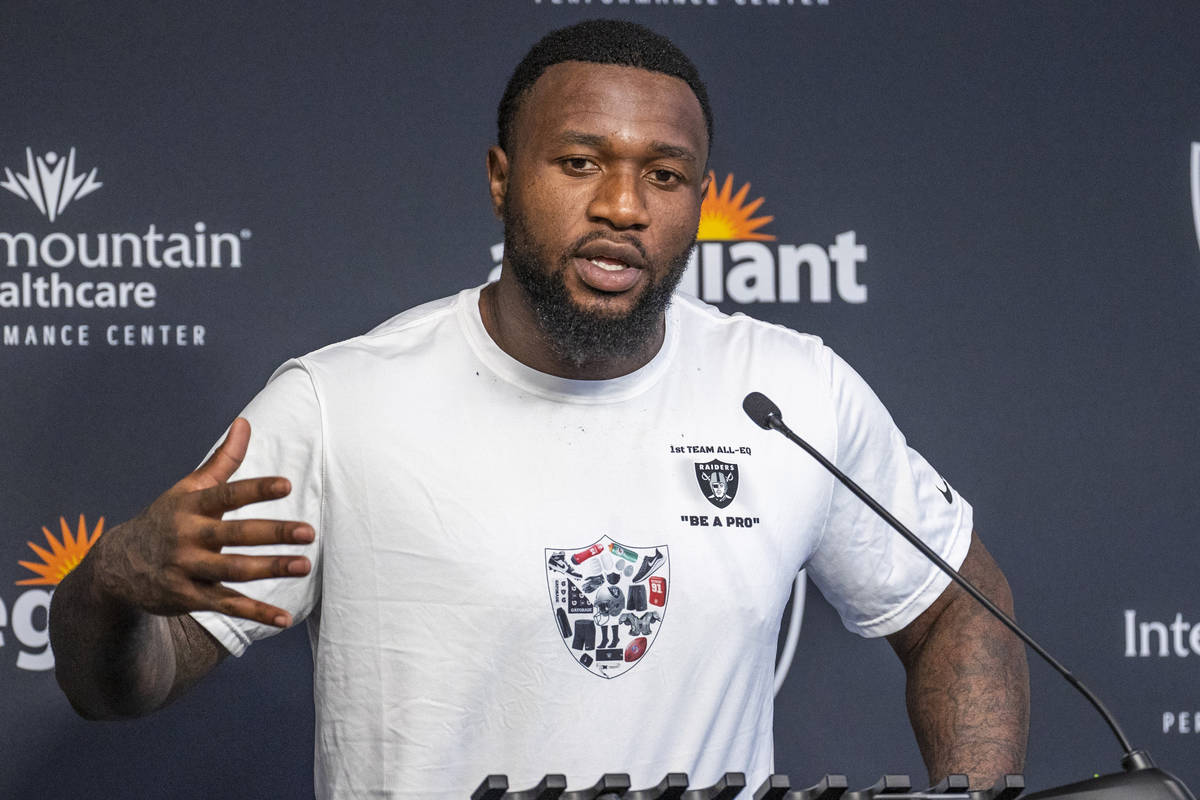 The Raiders signed defensive end Yannick Ngakoue in hopes he can finally help improve a pass rush that has been anemic at times over the last few seasons. Defensive coordinator Gus Bradley, who coached him in Jacksonville, called him a true student of the game. Ngakoue said he has quickly taken to the organization and its culture: “I feel like I was a Raider all along. It just took me awhile to get here.”

Play(s) of the day

Wide receiver Zay Jones stood out Friday. Early in practice, he hauled in a ball Derek Carr zipped into traffic in the end zone. The players weren’t in full pads and there wasn’t supposed to be hitting, but Jones took a pop from safety Dallin Leavitt and held on to the ball. Jones then did a quick touchdown celebration and spun the ball on the ground.

A few plays later, he got open on a double move and caught another would-be touchdown from Carr. Over on the other field, the ball continues to come out of backup quarterback Marcus Mariota’s hand much cleaner than during last year’s training camp as he made several big throws.

Raiders defensive lineman Solomon Thomas has been an outspoken advocate for mental health awareness in the wake of his sister’s suicide in 2018. He expressed his support Friday for tennis star Naomi Osaka and Olympic gymnast Simone Biles in their recent acknowledgments of struggling with their own mental well-being.

“They are at the top level of all athletes. For them to have the strength and vulnerability to say, ‘Hey, I need to take care of myself’ is unbelievable. People don’t understand the pressure on those athletes. They legit have the weight of the world on their shoulders. I feel like it’s extremely important for them to be able to talk about that on the stage they’re on and it’s huge they’re doing it.”

Bradley spoke about the development of the team’s young cornerbacks, particularly high draft picks Trayvon Mullen and Damon Arnette. “There is talent back there, but consistency breeds credibility. If they play consistent, we’ll see coaches trust them more. That’s what we’re working on right now.

“I think a guy like Mullen, boy, is he consistent. That’s one thing I’ve noticed. Arnette is building consistency. He had a really good day yesterday. The challenge is to take stacking those up to build that trust. … Casey Hayward over the course of time has built that trust. I think that’s the message with the corners on the back end. It’s a race to maturity for them.

“We have to speed everything up and try to get them to act like sixth- and seventh-year veterans.”

Richie Incognito was back at practice after the veteran left guard took Thursday’s session off. Running back Kenyan Drake and defensive tackle Darius Stills both took the field after opening camp on the non-football injury list. Rookie safety Tyree Gillespie was the only player on the active roster not participating in Friday’s practice.

Running back Jalen Richard remains on the COVID-19 list, but Theo Riddick was moved to the reserve/retired list. Linebacker Divine Deablo and corner Isaiah Johnson are on the active/physically unable to perform list.