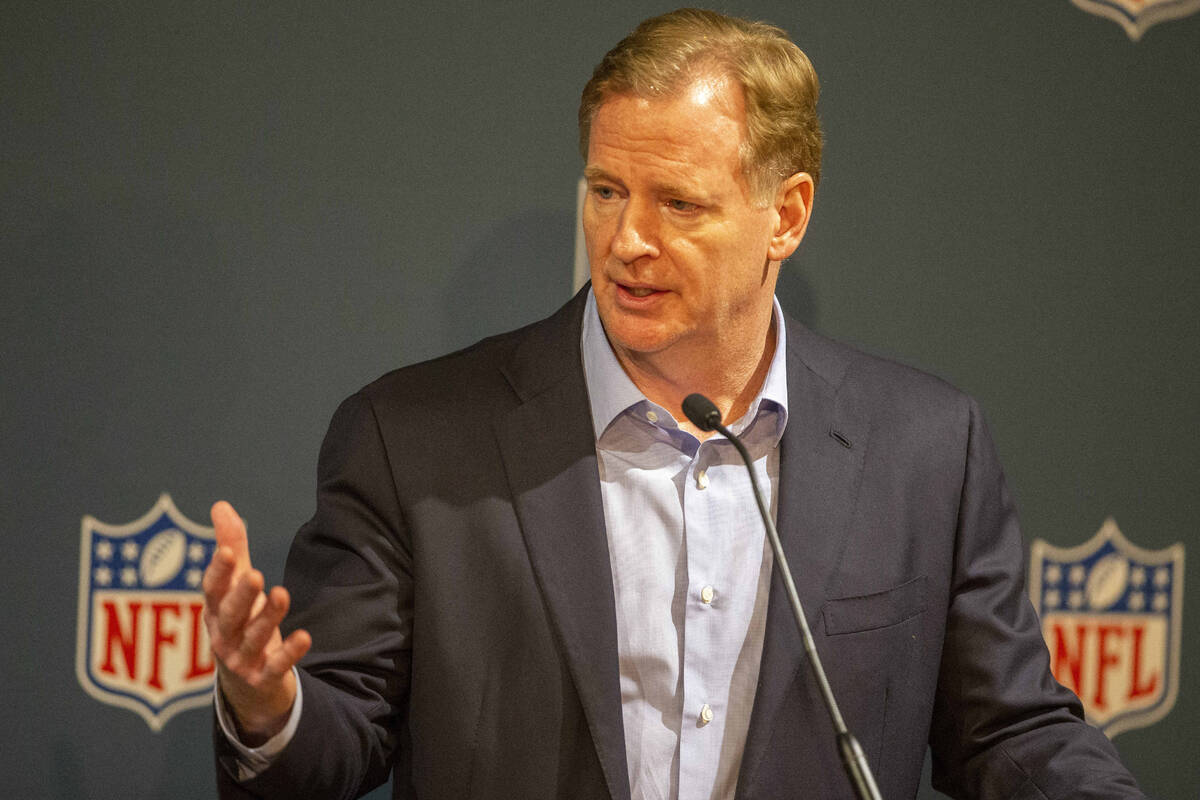 NFL commissioner Roger Goodell speaks during a news conference after an NFL meeting where the team owners voted to make Las Vegas the host city of Super Bowl 58 in 2024 at the Four Seasons Resort and Club Dallas at Las Colinas on Wednesday, Dec. 15, 2021, in Irving, Texas. (Heidi Fang/Las Vegas Review-Journal) @HeidiFang

The NFL established wide-ranging changes to its COVID-19 testing protocols on Saturday in which asymptomatic vaccinated players will be subject only to random spot testing for the remainder of the season.

Had these new guidelines been in place, the Raiders game against the Cleveland Browns, which was moved from Saturday to Monday after about two dozen vaccinated Browns players tested positive for COVID-19 this week, would have been played as scheduled.

The new guidelines appear to be in response to the Raiders-Browns situation, as well as the Rams and Seahawks and Washington Football Team and Philadelphia Eagles games that were moved around this weekend after a COVID-19 positive test outbreak among Rams and WFT players.

In a memo sent to all 32 NFL teams and obtained by the Las Vegas Review-Journal, the league outlined a less intrusive testing approach for vaccinated players while maintaining stringent protocols for unvaccinated players.

In the memo, NFL Commissioner Roger Goodell indicated the recent escalation in positive tests could be the result of the less intrusive Omicron variant.

“Medical information strongly indicates that this variant is significantly more contagious but possibly less severe than prior variants, particularly for people who are fully vaccinated and have received a booster shot,” Goodell wrote in the memo. “Our experience with the Omicron variant is fully consistent with this expectation – while more players and staff are testing positive, roughly two thirds of those individuals are asymptomatic, most of the remaining individuals have only mild symptoms, and the virus appears to clear positive individuals more rapidly than was true with the Delta or earlier variants. In many respects, Omicron appears to be a very different illness from the one that we first confronted in the spring of 2020.”

The Raiders expressed frustration over their game being postponed by two days, especially after being advised of the switch as they boarded buses bound for the airport for their flight to Cleveland on Friday. With his team still in the thick of the playoff race, owner Mark Davis felt the last-second audible adversely affected the Raiders.

“I do want to make it clear that health and safety is the top priority,” said Davis. “But the way this went down puts us at a complete competitive disadvantage for a number of reasons.”