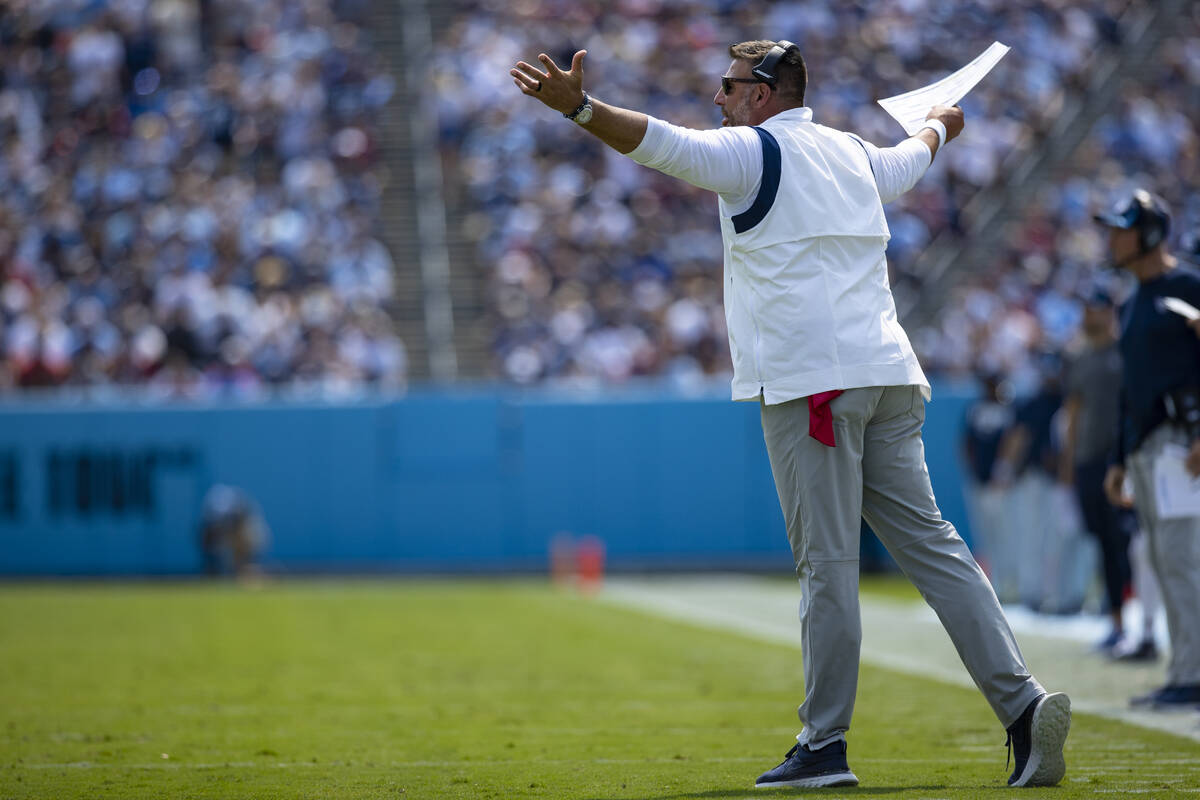 Tennessee Titans head coach Mike Vrabel gestures toward referees during the first half of an NFL football game against the Arizona Cardinals, Sunday, Sep. 12, 2021, in Nashville, Tenn. (AP Photo/Brett Carlsen)

The overreaction was rampant after the opening weekend of the NFL season, which is fine because it just increases the fascination for Week 2.

Already, we are trying to separate the pretenders from the contenders while contemplating who among the surprise losers in Week 1 have what it takes to get back on track.

Here are four storylines to ponder:

First games can be dicey. No matter how much of a grip coaches think they have on their teams, even they have more questions than answers heading into the opener.

Which is why Packers coach Matt LaFleur, Bills coach Sean McDermott and Titans coach Mike Vrabel likely are dismayed after watching their teams lay eggs in their openers. All three are projected to be playoff teams, yet all three looked like they need a ton of work.

The Bills travel to Miami to play the Dolphins, the Packers host the Lions and the Titans visit the Seahawks in Seattle. Only the Packers appear to have a game conducive to getting back on track. It would not be a surprise if two of the three fell to 0-2.

Jameis Winston, the Saints’ new starting quarterback, has been prone to tremendous peaks and valleys, following up three-touchdown masterpieces with four-interception duds.

Interestingly, he is coming off a five-touchdown day in a win against the Packers in which he attempted just 20 passes. Winston was incredibly efficient, completing 14 of his attempts while avoiding any sacks or interceptions.

Maybe that is the recipe for Winston and the Saints — lean on a sound running game and a good defense so Winston doesn’t have to do everything. The Saints will get a second look at Winston on Sunday in Carolina against the Panthers. They hope to see more of the consistent and efficient QB he was against the Packers.

The Bears are spinning their wheels with Andy Dalton at quarterback. While it is clear they are biding time before handing things off to rookie Justin Fields, it is almost inexplicable they will let this play out much longer.

Dalton, a journeyman at best at this stage of his career, offers little. In fact, his presence stands in the way of the development of Fields. And that isn’t even getting into the part about Fields, whose athletic ability and arm strength are at an elite level, potentially offering more than what Dalton gives them.

The Bears host the Bengals. It might be time to get the youngster who has excited Bears fans and excelled at Ohio State more significant playing time.

It’s hard to determine how much to read into the Eagles’ win over the Falcons. Atlanta almost looked to be going through the motions. As a result, it’s difficult to make much out of a 32-6 win.

Nevertheless, the Eagles looked crisp and explosive in their first game under new coach Nick Sirianni, and those are attributes that travel pretty well.

The Eagles will need all of that Sunday in Philadelphia against the 49ers, who looked a bit uneven in beating the Lions 41-33.

If Philadelphia and improving quarterback Jalen Hurts can win, it will change the narrative about their season and their role in what figures to be a wide-open race in the NFC East.