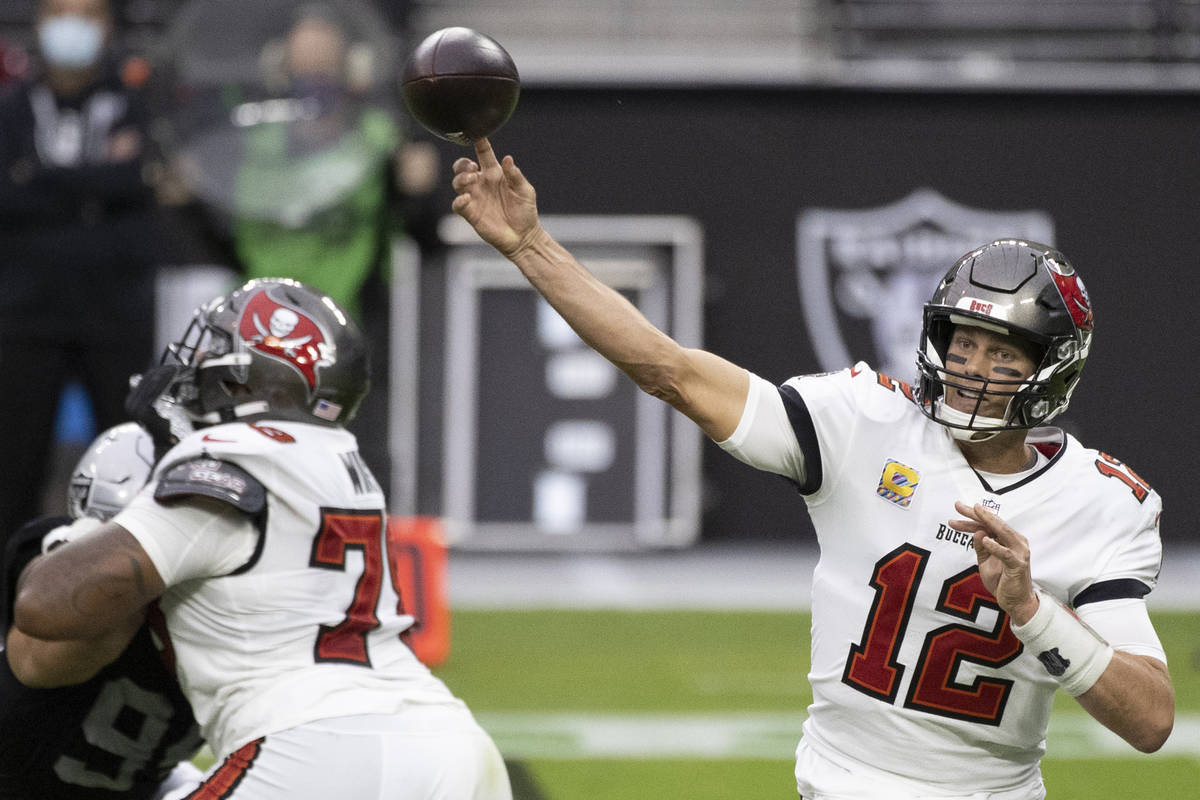 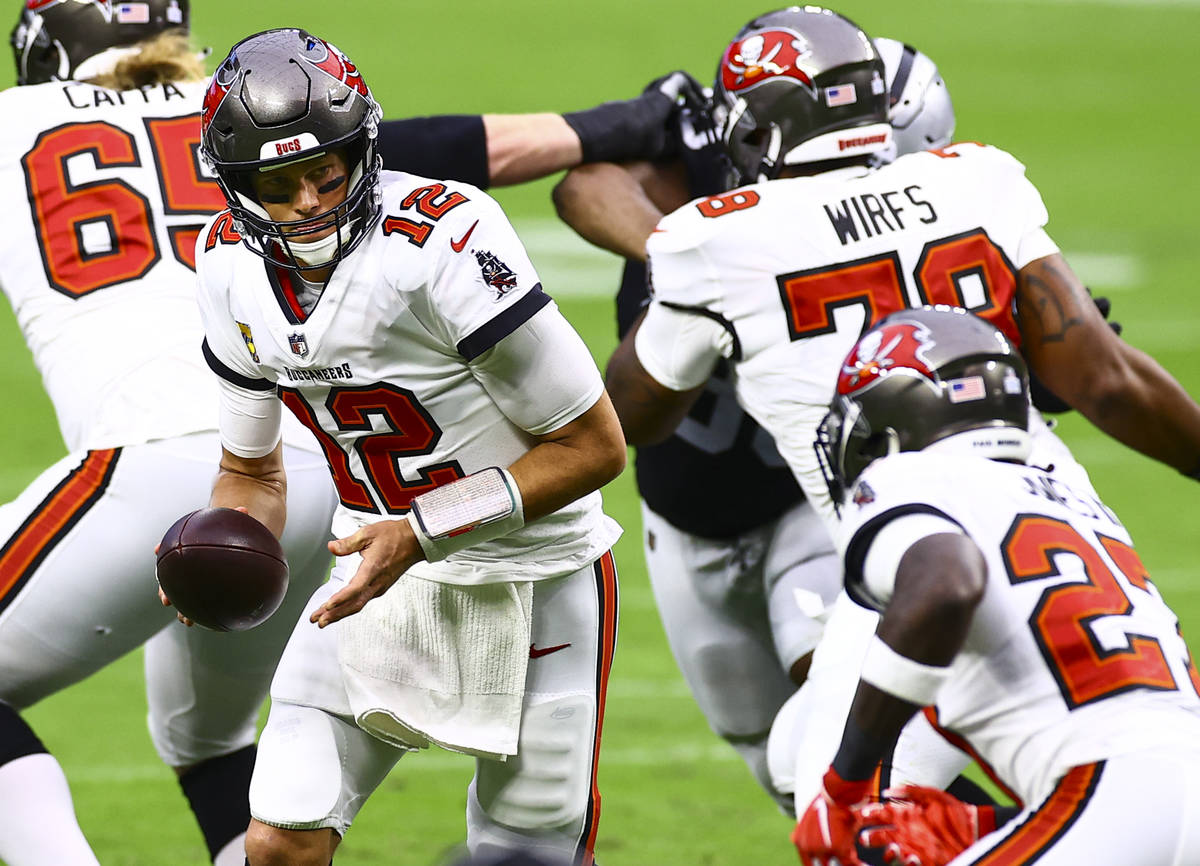 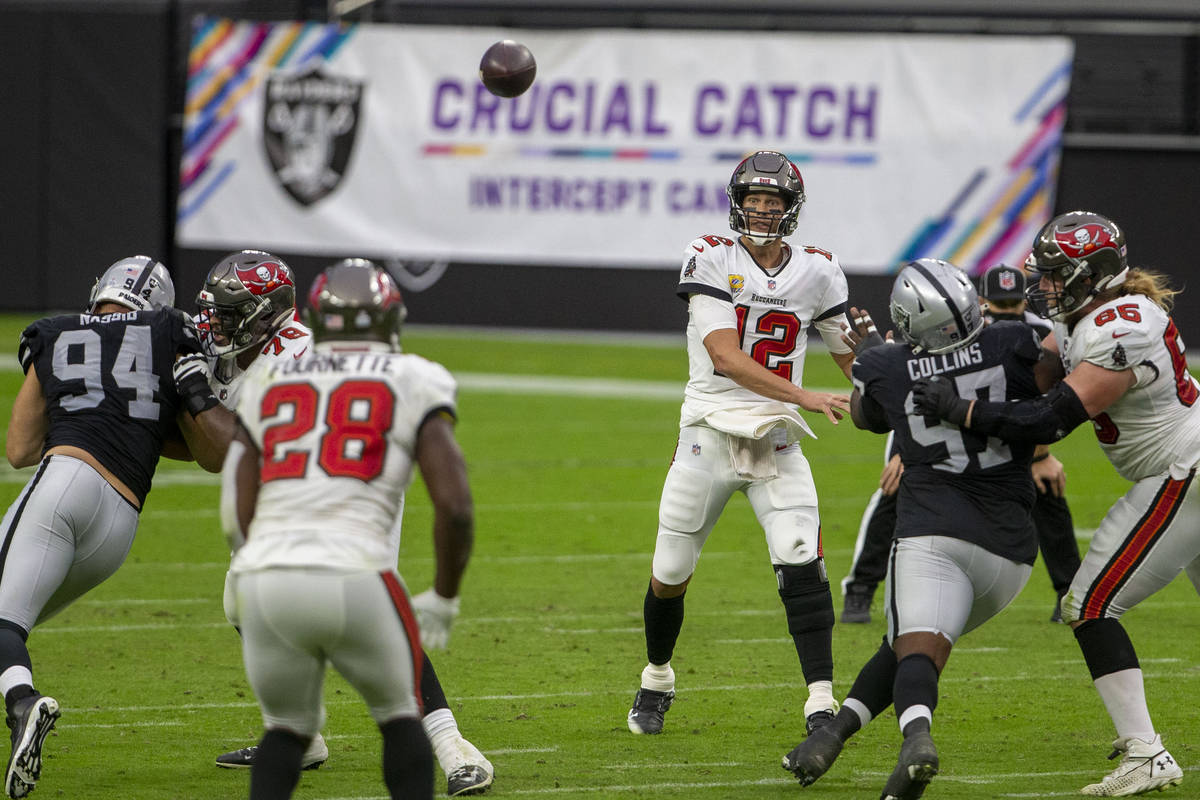 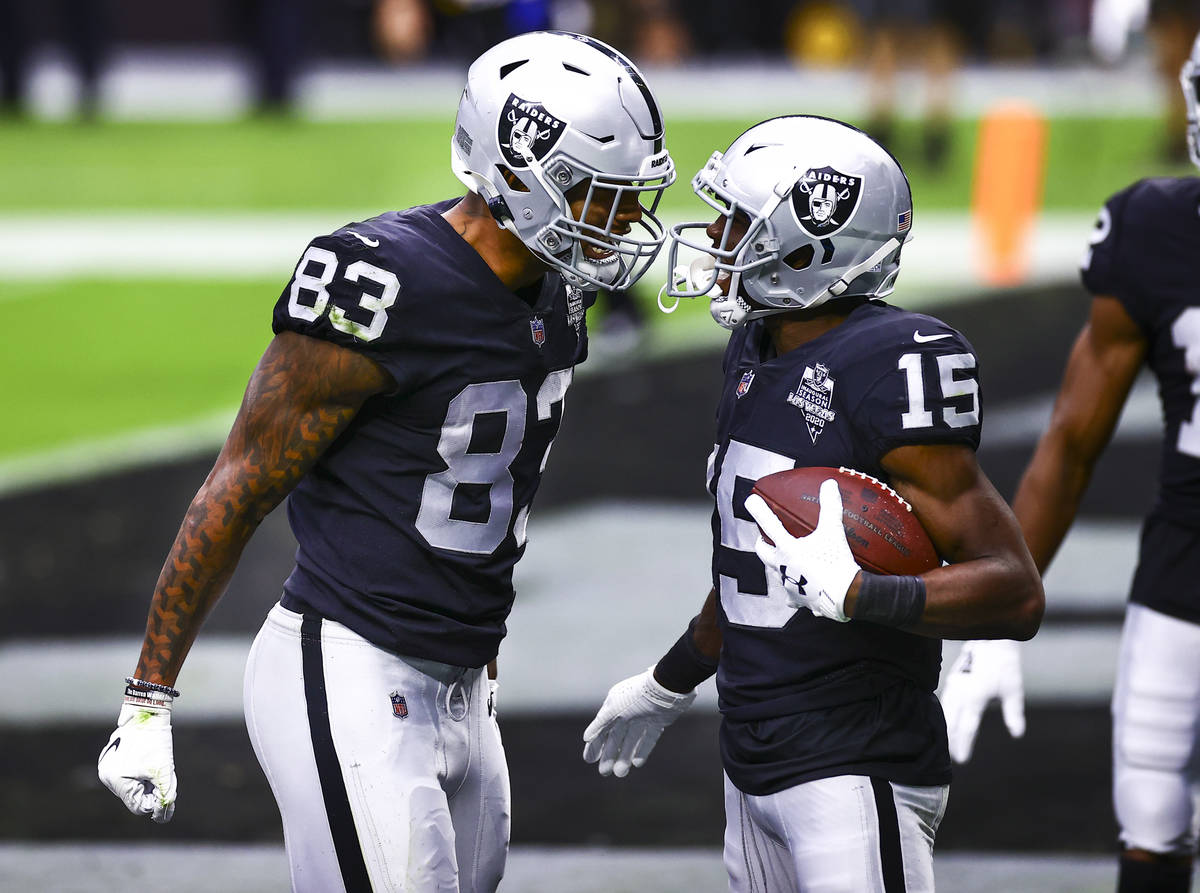 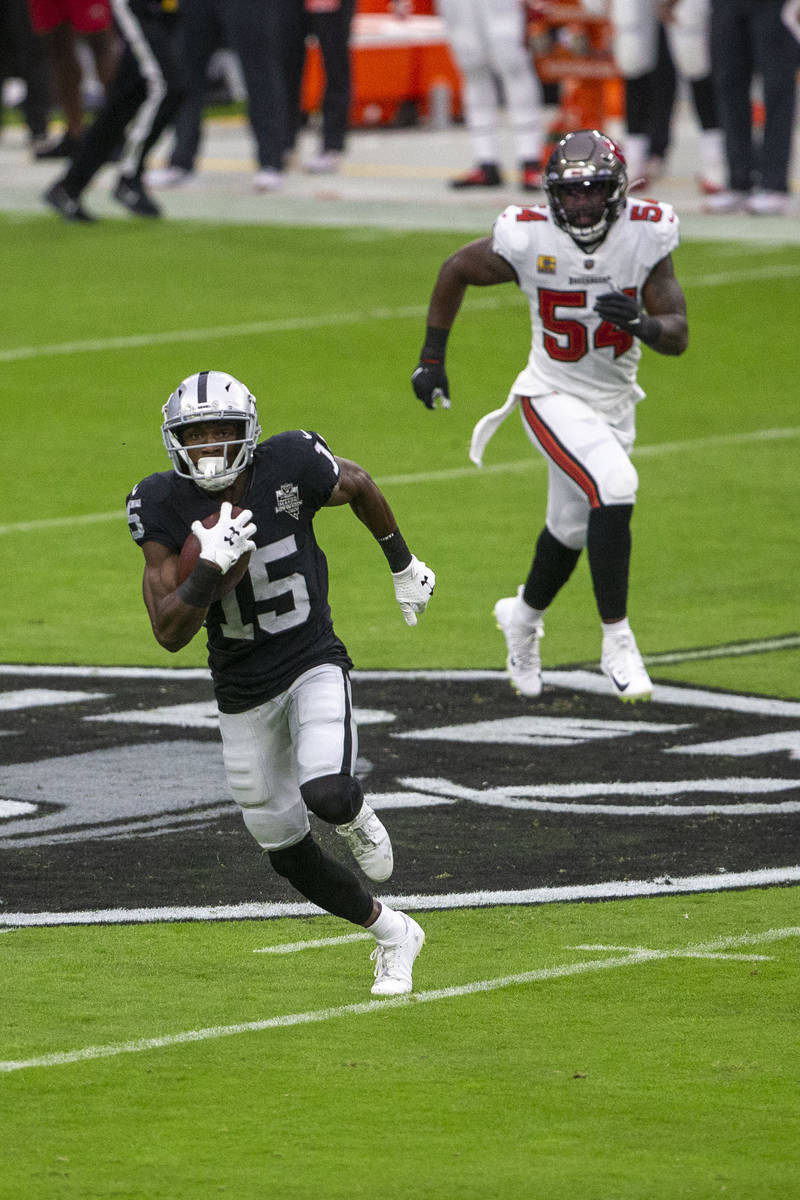 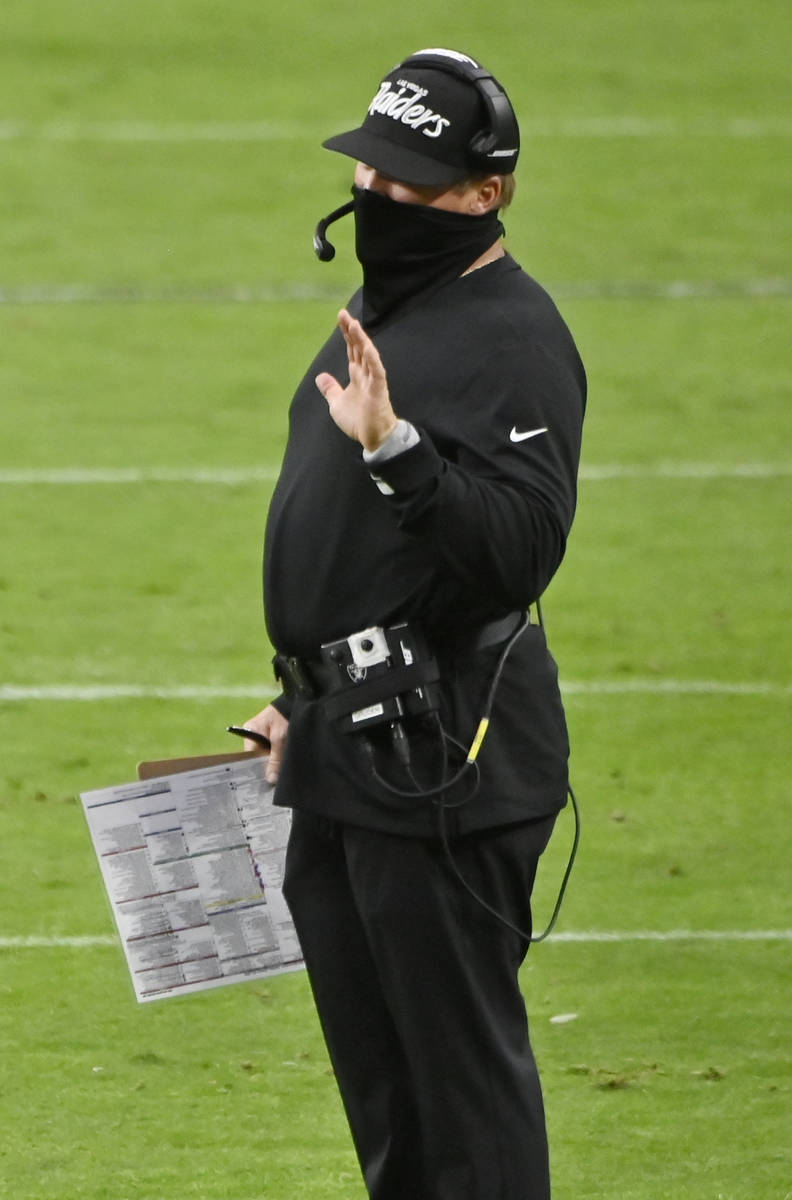 Three takeaways from the Raiders’ 45-20 loss to the Tampa Bay Buccaneers on Sunday at Allegiant Stadium:

The defenses that have had the most success against Bucs quarterback Tom Brady over the years have been the ones that have made him uncomfortable in the pocket.

Brady look more than relaxed against the Raiders, and even at 43 he can carve up even the best defense — which Las Vegas is not.

His 33-yard touchdown pass to Scott Miller with 17 seconds left in the first half hit the wide receiver perfectly in stride in the left corner of the end zone with little if any room to spare.

By the time he was done, Brady had completed 33 of 45 passes for 369 yards and four touchdowns with no interceptions.

The Raiders never had a chance, not when they couldn’t generate any pass rush.

Nelson Agholor developed a reputation with the Philadelphia Eagles for dropping passes, but the Raiders believed in his ability and signed him during the offseason.

Turns out to be a smart move. For the most part.

Agholor helped keep the Raiders competitive against the Bucs. He caught a 20-yard touchdown pass in the first quarter for the game’s first score, and he hauled in a 44-yard pass in the third quarter to set up a TD.

That last touchdown gave the Raiders life, bringing them with 24-17 with 4:15 left just as hope for victory seemed to be slipping away.

But then he reminded Eagles fans why he drove them crazy in Philadelphia.

Agholor dropped a pass late in the third quarter — his first drop of the season. He then dropped another pass and deflected a third that became the game-clinching interception for the Bucs.

He helped give the Raiders a chance to win, then helped take it away.

3. Seven is greater than three.

The Raiders had worked their way back from a two-touchdown deficit, putting themselves in position to tie the game early in the fourth quarter.

They faced a fourth-and-1 at the Bucs’ 17-yard line, but coach Jon Gruden opted for a field goal. Daniel Carlson’s 36-yarder with 12:43 left brought the Raiders to within 24-20, but it was a missed opportunity to put real pressure on Tampa Bay.

Brady then took the Bucs 67 yards on 11 players to go ahead 31-20 midway through the fourth to take a critical two-possession lead.

As NFL coaches have relied more and more on analytics, many have been more aggressive in going for it on fourth down.

Gruden isn’t necessarily adverse to doing that himself, but this wasn’t the first time he took the more conservative route. He twice ordered field goals against the Buffalo Bills three weeks ago while facing a pair of fourth-and-2s.

In today’s NFL, taking three over seven is the riskier approach.