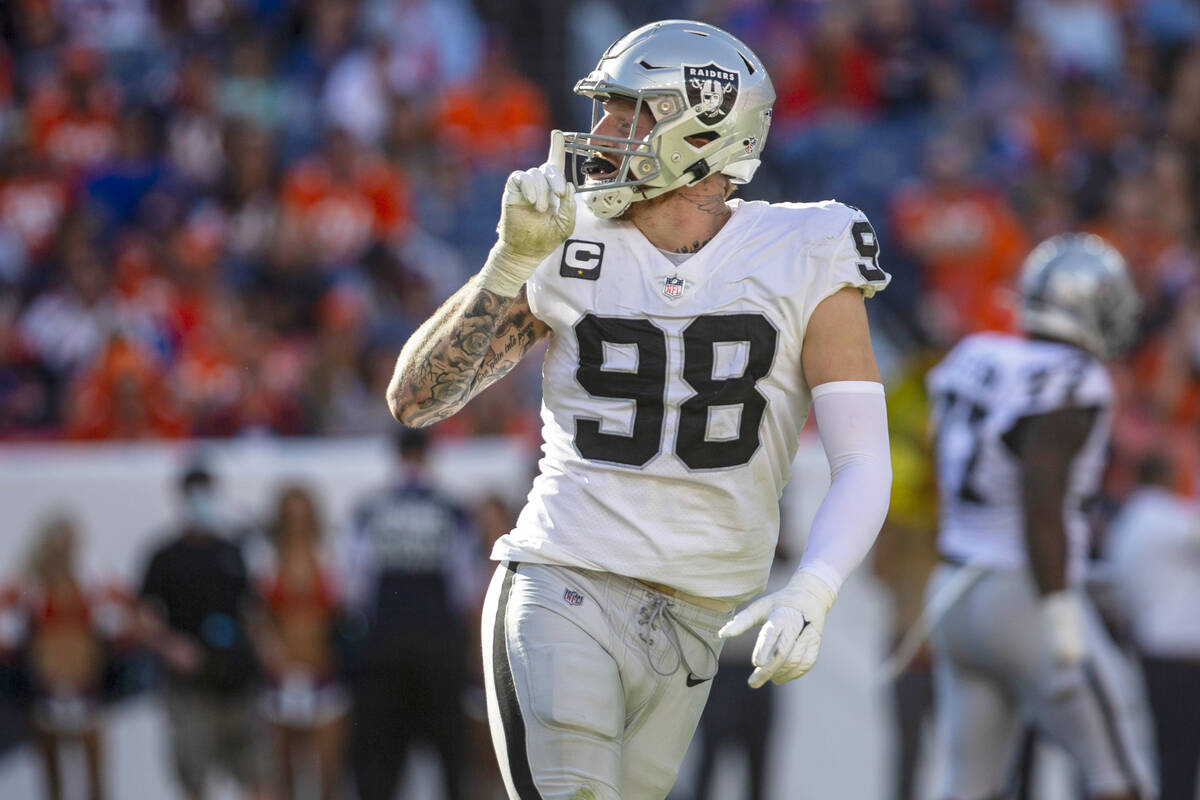 It’s not exactly a secret. A consistent pass rush — or lack thereof — was a problem last season for the Raiders. This year, it’s one of the solutions.

“(The pass rushers have) given us a little bit of an identity up front of what it’s supposed to look like from walkthrough, to meeting, to practice now into the game,” Las Vegas interim coach Rich Bisaccia said Monday. “They feed off of each other. I think it’s a good identity for us as we go forward on defense.”

The retooled defensive line has helped propel the Raiders to their 4-2 start and has been one of the most productive units in the NFL. Defensive linemen have combined for 15½ of the team’s 16 sacks, a figure that ranks sixth among the 32 NFL teams.

The Raiders had five sacks in Denver on Sunday and coaxed Broncos quarterback Teddy Bridgewater into four turnovers, giving them seven takeaways through six games and putting them on pace to shatter their 2020 total of 15.

The Raiders finished the 2020 season with 21 sacks, including 16 from the defensive line. The ineptitude up front allowed opposing teams to score 29.9 points per game.

The Raiders haven’t surrendered more than 28 points in a single game this season.

Third-year defensive end Maxx Crosby has keyed the turnaround, evolving from a surprisingly productive rookie into the highest-graded edge rusher in the NFL, per Pro Football Focus. He has five sacks, defensive tackle Solomon Thomas has 2½ and fellow free-agent acquisitions Quinton Jefferson, Darius Philon and Yannick Ngakoue have two apiece

“Everything comes in bunches, right?” Bisaccia hypothesized. “I think they’re just kind of living off that and feeding off of that.”

To that point, the Raiders have had at least two sacks in all six games this season. They had seven such games during the entire 2020 season, though never more than two consecutively.

But new personnel and a new defensive coordinator have helped to alleviate the woes that plagued the team in the past.

“Getting Yannick (Ngakoue) and certainly getting Q (Quinton Jefferson) and Solomon (Thomas) — they’re a great group together. We’re just building off of what we had to some degree,” Bisaccia said. “Those guys have added not only a veteran dimension, but a size and a quickness and an urgency to practice and an urgency in meetings.”