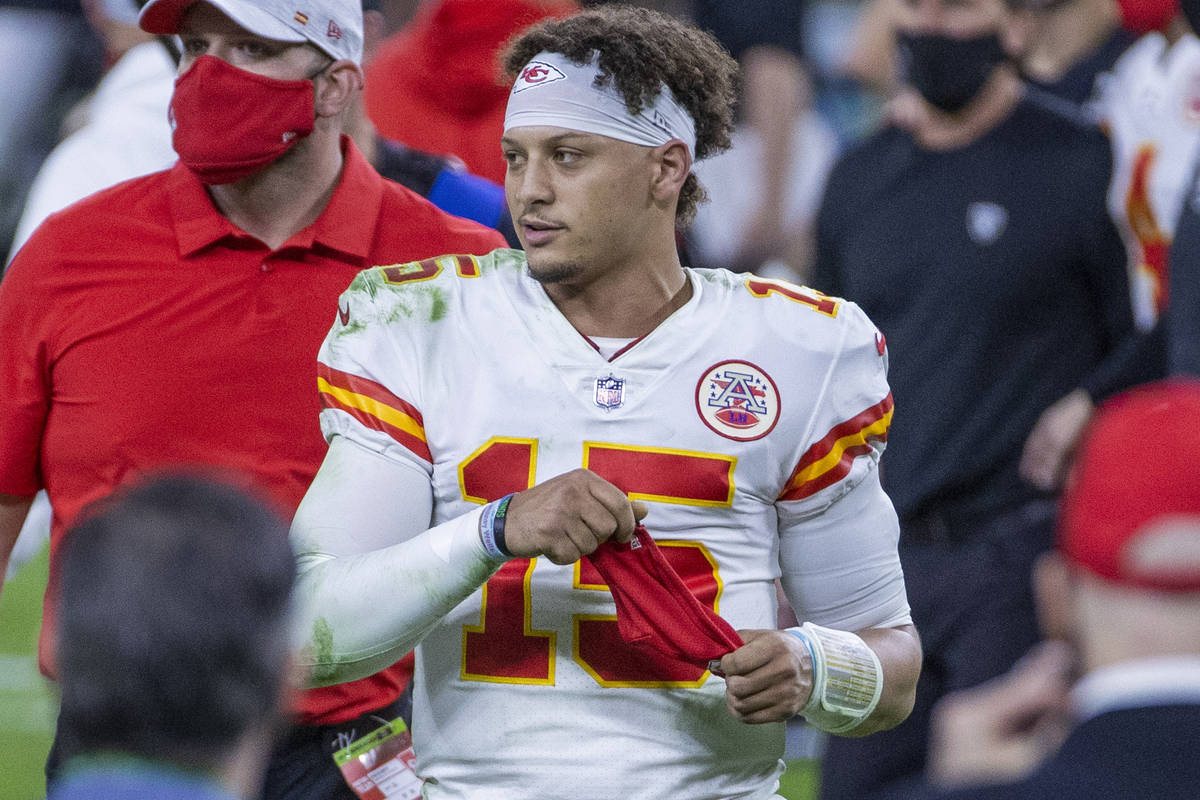 In the aftermath of the Kansas City Chiefs’ comeback victory over the Raiders on Sunday at Allegiant Stadium, it wasn’t lost on Chiefs quarterback Patrick Mahomes what exactly was required to leave Las Vegas with a victory.

“We needed everything we have to win that football game,” he said.

The manner in which the Raiders (6-4) pushed the Chiefs (9-1) for the second time this season — remember, the Raiders beat the Super Bowl champions in their first meeting last month — compelled Mahomes to describe the Raiders in a way not often heard over the last two decades.

That might be a bit of an overstatement, although it is clear the Raiders have narrowed the gap on their AFC West rivals and planted themselves squarely in the AFC wild card race.

The Raiders sit in the seventh spot in the conference standings, which means they’d make the playoffs if the season ended today. A favorable schedule that includes a pair of winnable games against the Atlanta Falcons and New York Jets over the next two weeks awaits, as do head-to-head matchups with the Miami Dolphins (6-4 ) and Indianapolis Colts (7-3), both of whom the Raiders are battling for playoff spots.

In addition, the Raiders could be getting healthy at just the right time. The return of defensive starters Clelin Ferrell (DE) Cory Littleton (LB) and cornerback Lamarcus Joyner could happen this week, although coach Jon Gruden announced Monday that starting left guard Richie Incognito is having foot surgery and will not return this season.

Lastly, by adding veteran edge rushers Vic Beasley and Takk McKinley on Monday, they are adding juice to their inconsistent pass rush.

“It’s exciting because you see where we’re headed; it’s showing you a little glimpse here,” quarterback Derek Carr said. “We’re starting to get a little healthier. We’re on our way.”

But as they are learning, covering that last patch of grass between good and great is among the most difficult pieces of real estate to navigate in all of sports.

It’s the difference between delivering an A- performance like the Raiders did on Sunday and the A+ that was required to beat the Chiefs.

It’s not letting catchable balls slip through your hands, as the normally reliable Nelson Agholor did twice on Sunday, including one early in the fourth quarter that would have set the Raiders up in Chiefs territory.

The Raiders were up 24-21 at the time and needed another touchdown to create a two-score cushion. Instead, the Raiders had to punt on the next play, and Mahomes and the Chiefs ended up driving 91 yards for a touchdown to take a 28-24 lead.

It’s being poised at critical moments, rather than committing the slew of penalties that either sabotaged Raiders drives or aided ones by the Chiefs.

“We have to eliminate the penalties, and that starts with me,” Gruden said.

And it is being sound fundamentally and schematically, which wasn’t the case when safety Johnathan Abram vacated his coverage area thinking Mahomes might scramble for big yards on the game-winning touchdown drive. It resulted in Travis Kelce being wide open in the end zone, creating an easy pitch and catch between Mahomes and his All-Pro tight end.

Those nuances and finer points became the difference between beating a great team for the second time this season and a gut-wrenching loss.

The A- performance the Raiders put together Sunday will beat a whole bunch of teams in the NFL. And the Raiders will need every bit of that grade to complete a playoff push that started out as wishful thinking but is now so reasonably within their grasp it would be a monumental letdown if they fail to make it.

But it wasn’t sufficient against the Chiefs. The Raiders are resolved to figure out a way to earn the perfect score needed. That was the focus inside a devastated but determined locker room.

“It’s not, ‘Ah man, we were close.’ That’s not the mentality in there,” tight end Jason Witten said. “These are the games that you earned to play in. Now you got to find ways to win them.”