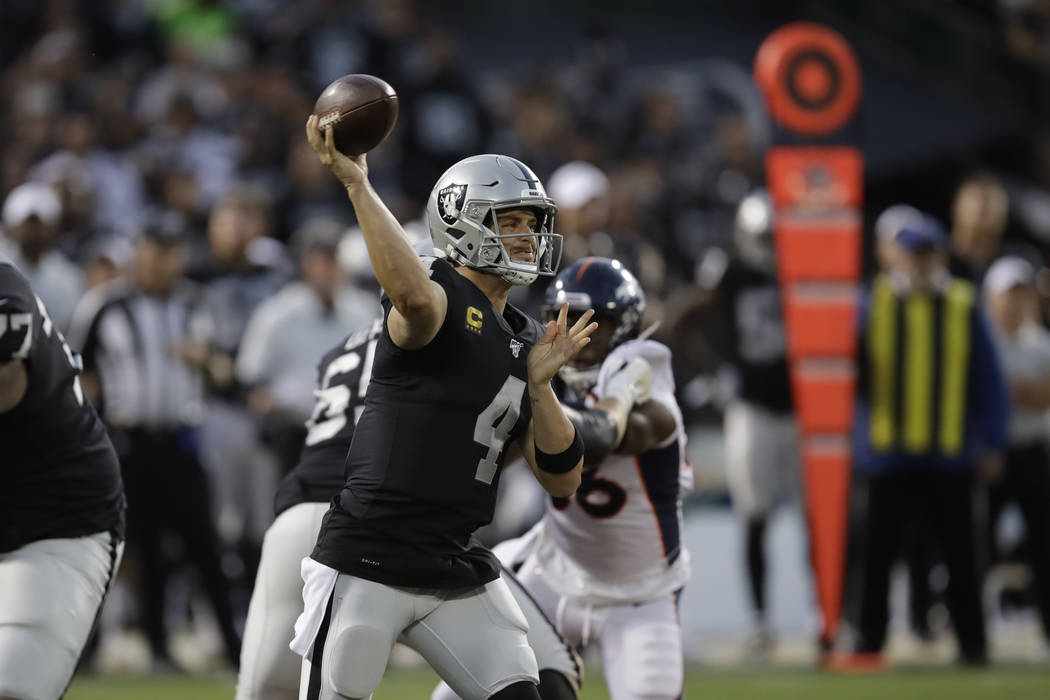 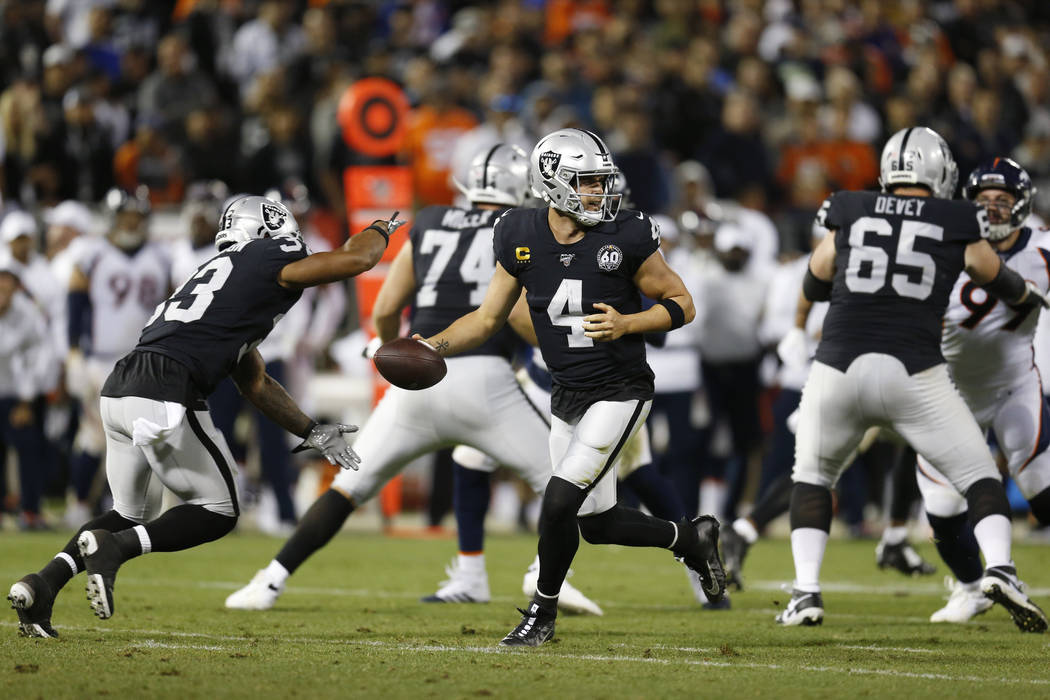 OAKLAND, Calif. — The Raiders face a stiff challenge in their quest to start 2-o, as the defending AFC West-champion Kansas City Chiefs come to Oakland for a 1:05 p.m. game Sunday. Here is a breakdown by position:

Derek Carr played outstanding in Week 1 against the Broncos. Much was made of the pass protection, but Carr played a major role in that by making quick decisions and getting rid of the ball. He looked comfortable in his second year under coach Jon Gruden and appears poised to take a major step forward. Patrick Mahomes comes in with some questions about the ankle he injured last week in Jacksonville. His arm is still attached to his body, though.

First-round pick Josh Jacobs answered just about every question in his debut as the Raiders’ feature back. He was good in pass protection, capable as a receiver and showed an ability to handle a heavy workload. The Chiefs solidified their backfield just before the start of the season with the addition of LeSean McCoy. He showed plenty of burst last week just days after signing with Kansas City. Damien Williams didn’t find much room to run but adds another option for the Chiefs.

It’s amazing to think that less than two weeks ago this could have been a matchup of Tyreek Hill against Antonio Brown. But Hill was hurt in the opener and Brown is set to make his debut for the Patriots on Sunday, leaving both groups a bit depleted. Sammy Watkins had a monster game last week, and Hill’s absence could lead to the Chiefs unleashing the speed of Mecole Hardman. Tyrell Williams thrived after he was thrust into a lead receiver role last week. He’ll need help out wide, which could come from “Hard Knocks” Keelan Doss, who is expected to make his NFL debut. The Chiefs’ big advantage comes at tight end. Darren Waller looks like a potential star at tight end, but he’s no Travis Kelce.

The Chiefs’ line is average. That probably would have been enough to get the edge here entering the season. While it’s never a great idea to overreact to one game, especially in Week 1, the Raiders’ revamped line played outstanding last week, even with both projected starting guards missing the game. Neither team allowed a sack in the opener, but the Raiders’ pass blocking graded out as the best in the league, according to Football Outsiders. Their run blocking was also in the top 10.

The three sacks the Raiders recorded in the opener made headlines because of how inept the pass rush was last season. There were certainly caveats to the stat total. First, it was against Joe Flacco. The pressure also was helped by excellent coverage downfield. Kansas City invested heavily in defensive ends in the offseason, but didn’t get much return in the opener as the unit tries to find its identity.

This is the Chiefs’ unit that was hit hardest by offseason departures on what was already a horrid defense. Their new scheme should better take advantage of Reggie Ragland’s skill set, but they’re still a work in progress. The Raiders also had plenty of room for improvement, but Vontaze Burfict looked ready to be the defense’s captain.

The Raiders’ secondary also looked improved before Gareon Conley left the game with a neck injury. Now it will have to deal with the absence of rookie Johnathan Abram for the rest of the season. The Chiefs were horrific last season and put a lot of hopes on Tyrann Mathieu, who hasn’t been the same player since a knee injury four years ago.

One of the biggest keys to the Raiders’ victory last week was the phenomenal performance of their special teams units. Hill’s absence takes away a major threat for the Chiefs, but kicker Harrison Butker and punter Dustin Colquitt are good, and they have dangerous returners.

The Raiders overcame a lot of distractions last week to score a victory. Now the challenge becomes carrying over that momentum. The Chiefs are always well prepared under coach Andy Reid.