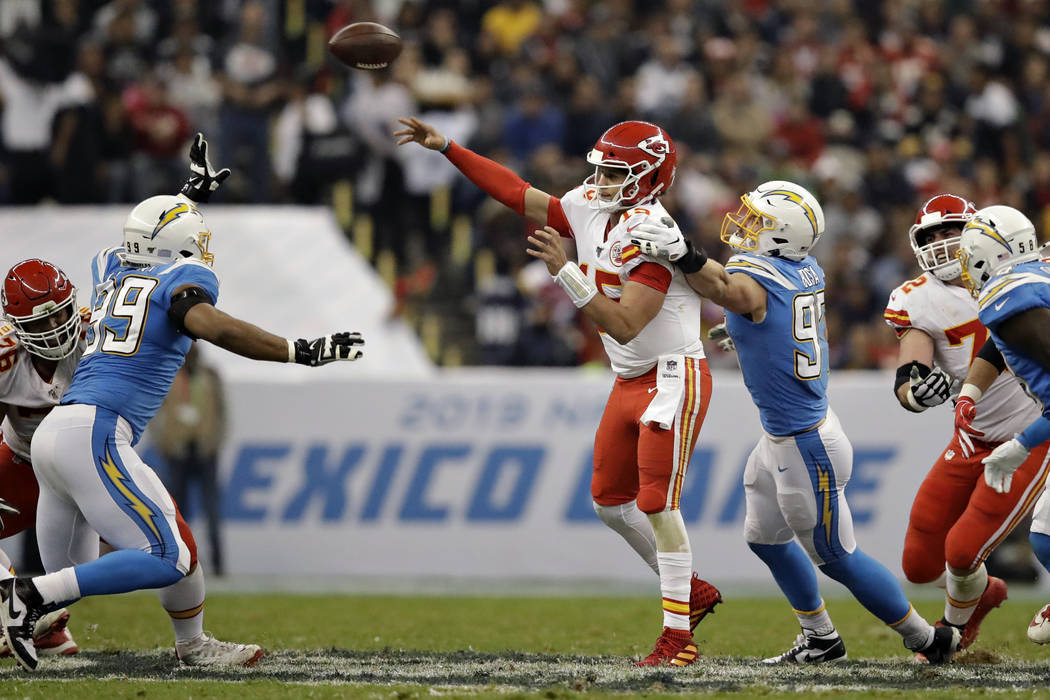 Derek Carr is still having a strong bounce-back season despite last week’s setback against the Jets. His numbers on third down are particularly impressive. The Chiefs’ Patrick Mahomes is a generational talent.

Chiefs coach Andy Reid has a stable of capable and talented backs, though Damien Williams will miss the game because of a rib injury. LeSean McCoy isn’t as explosive as he once was and has shown ball security issues, with three fumbles in his last six games. That could be a factor should his touches increase dramatically this week. Josh Jacobs couldn’t find much room to run last week, but continues a stellar rookie season.

This is one of the only matchups in which the Raiders don’t have a clear advantage at tight end, as Travis Kelce is one of the best in the game. Oakland will be without key third-down target Hunter Renfrow, while Kansas City’s Tyreek Hill is finally getting fully healthy. He’s as dangerous a weapon as there is in the league.

The Raiders have had their full projected offensive line together a couple of times, though they were playing better when they were forced to patch holes each week. The struggles of Gabe Jackson suggest he’s not fully healthy. Kansas City’s front five has been a bit of a mess, except for right tackle Mitchell Schwartz.

The Raiders’ defensive front continues to be disruptive in the passing game to the detriment of its ability to stop the run. Dion Jordan’s addition as a pass-rush specialist gives the Raiders another dynamic playmaker on the line. The interior rotation continues to impress. The return of Alex Okafor to go with Frank Clark on the other side makes the Chiefs’ pass-rush dangerous, but they can be exploited in the run game.

The Chiefs have increased Daniel Sorensen’s snaps drastically, as he is often deployed in nickel and dime situations and has thrived in the role. They still don’t seem to use Reggie Ragland enough, though Anthony Hitchens has been steady. Newcomer Preston Brown might provide a boost if the Raiders make him active for the first time Sunday.

It’s one thing to have the Chiefs exploit your defensive backfield, as happened to the Raiders in the Week 2 meeting in Oakland. It’s quite another to get torched by Sam Darnold and the Jets, as happened last week. Nothing was good about the Raiders’ performance, but there are definitely issues that need to be straightened out, particularly in the presnap communication among the young players in the secondary. Kansas City has several playmakers, particularly Tyrann Mathieu.

Oakland’s special teams efficiency has dropped precipitously the last few weeks, largely because of net punting average struggles and missed field goals. Kansas City’s unit is in the top 10 in the league and an underrated secret to its success.

Expect to hear a lot of talk about two key factors during Sunday’s broadcast. Reid’s success after a bye week, and Carr’s struggles in cold weather and in Kansas City. Neither factor favors the Raiders.