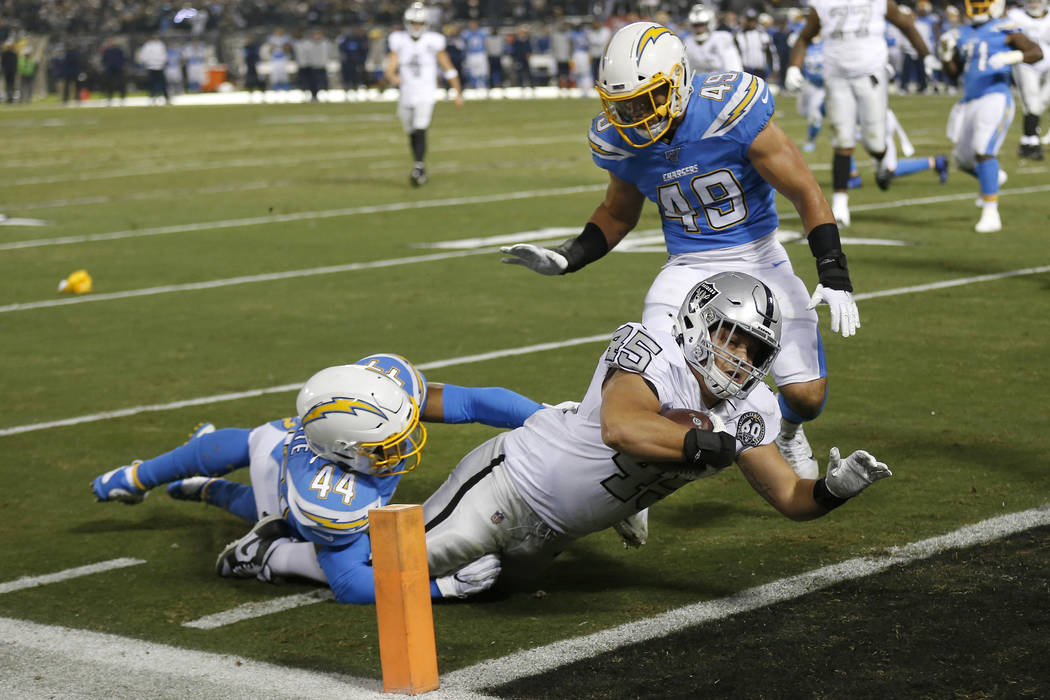 Oakland Raiders running back Alec Ingold (45) dives for the end zone to score past Los Angeles Chargers outside linebacker Kyzir White (44) and linebacker Drue Tranquill (49) during the first half of an NFL football game in Oakland, Calif., Thursday, Nov. 7, 2019. (AP Photo/D. Ross Cameron) 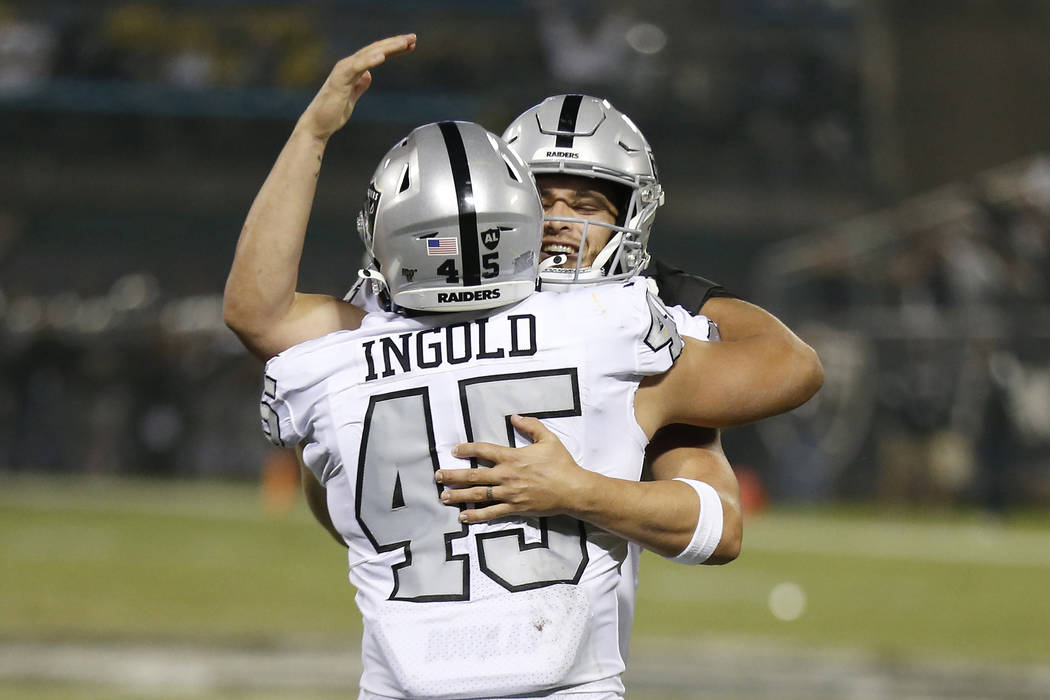 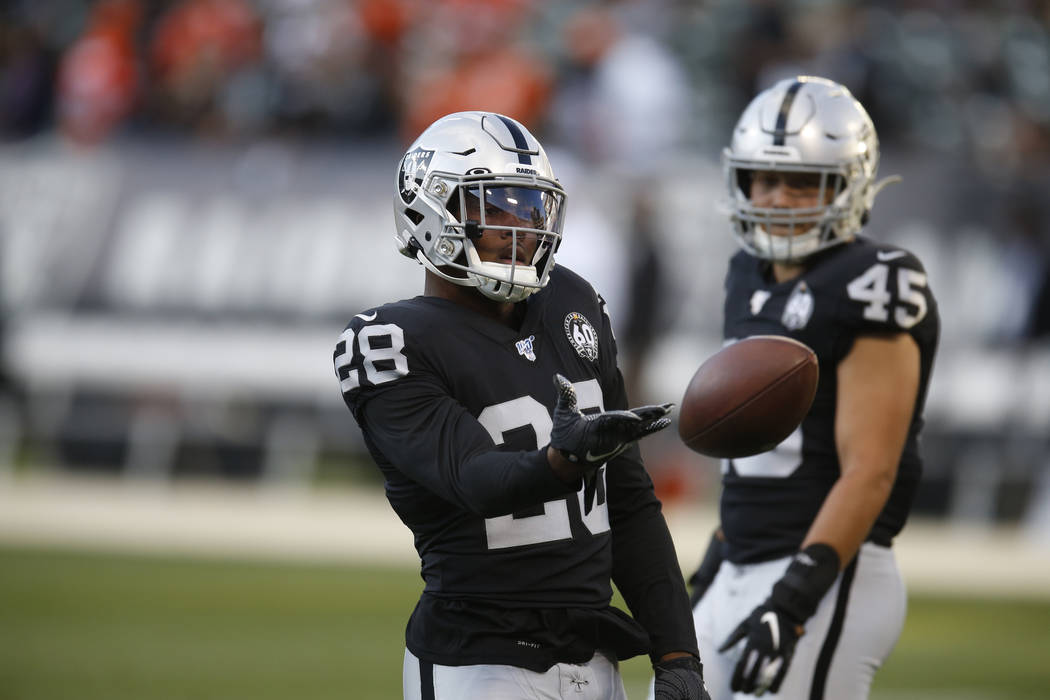 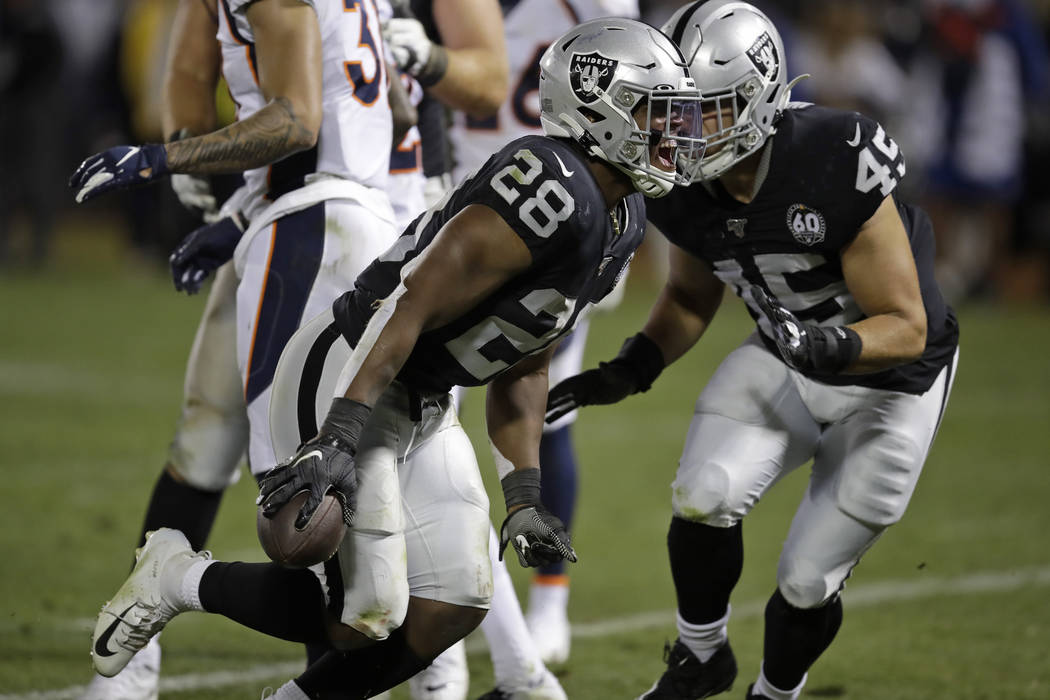 Oakland Raiders running back Josh Jacobs (28) celebrates after scoring a touchdown during the fourth quarter of an NFL football game against the Denver Broncos Monday, Sept. 9, 2019, in Oakland, Calif. At right is running back Alec Ingold (45). (AP Photo/Ben Margot)

ALAMEDA, Calif. — Raiders undrafted rookie fullback Alec Ingold’s favorite play this season was when he crossed the goal line without the ball.

Even though he scored a touchdown against the Los Angeles Chargers this month, Ingold is more fond of the leaping 2-yard touchdown that fellow rookie Josh Jacobs scored against the Chicago Bears in London when Ingold went over the top of the offensive line to hold off the linebackers and Jacobs took flight behind him to give the Raiders the lead in the final two minutes.

“He had no hesitation when he was going over the top that I was going to get my job done,” Ingold said Wednesday. “That just proved how much we trust each other to do our work.”

The connection the rookie running backs have developed is a major reason that the Raiders are a surprise playoff contender and have the NFL’s ninth-ranked rushing attack.

“He means everything (to our run game),” Jacobs said. “He’s just as important as the offensive line. He reminds me on certain plays of exactly what I’m supposed to do. I definitely owe him a lot of the credit.”

Ingold also is vital to the passing game. Pro Football Focus grades him at 84.3 as a pass blocker, third best in the league at the position. Ingold also is the third-rated fullback overall by the site at 68.0.

The Wisconsin product is taking advantage of the opportunity he earned by beating out veteran Keith Smith in training camp. The number of jobs has grown scarce in the modern NFL with fewer teams regularly utilizing a fullback, but coach Jon Gruden’s attack is more traditional.

Ingold has played 20.8 percent of the offensive snaps for the Raiders, who are fifth in the league in plays utilizing a fullback. It’s no coincidence the top three rushing teams in the league — Baltimore, San Francisco and Minnesota — are ahead of the Raiders on that list. New Orleans is fourth.

Ingold hasn’t just been a blocker, either.

He has received six carries and been targeted once in the passing game. All six rushing attempts have come in short yardage, three on third down and three on fourth down, and all six have been converted.

The one time Derek Carr threw him the ball, Ingold scored in a home win over the Chargers.

Still, he’s not about to start pointing to his success rate and lobby for more touches.

“I’ll be the last person to do that,” he said with a laugh. “We’ll have the offensive line lobbying for the ball first.

“As a fullback, I’m always going to be a blocker first, and the more yards Josh can get, the better I feel. But if you’re going to give me the ball, I’m going to do something with it. I’ll never ask for the football, but I’m going to run hard when I get it. I’m 100 percent more proud of what (Jacobs is) doing, though. If I can inspire him to run hard and he can inspire me to block hard, that’s how we’re kind of playing off each other.”

Ingold was a star dual-threat quarterback at Bay Port High School in Wisconsin before becoming a Badger, for whom he played linebacker before moving to fullback. He wasn’t drafted in April — only two fullbacks were selected — but signed with the Raiders after working with the team’s coaching staff at the Senior Bowl.

“I can’t really hold anything against anybody for not picking me,” Ingold said. “It happened, and I’m super grateful for it because I’m here and I don’t know where I’d be if I had been drafted.”