Vegas Nation's Adam Hill and Heidi Fang recap what Monday's training camp was like from Raiders headquarters, update on tight end Foster Moreau's recovery from injury and discuss what fullback Alec Ingold had to say about his 2019 season. (Heidi Fang/Las Vegas Review-Journal) 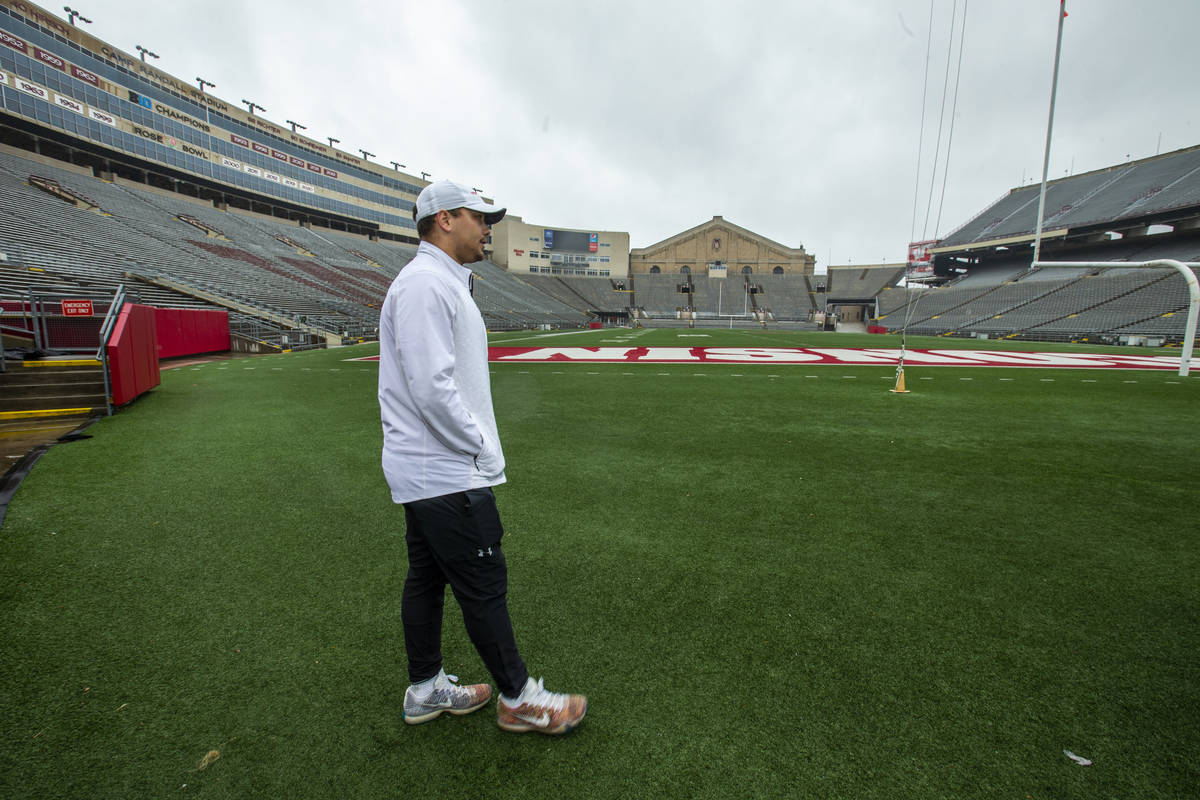 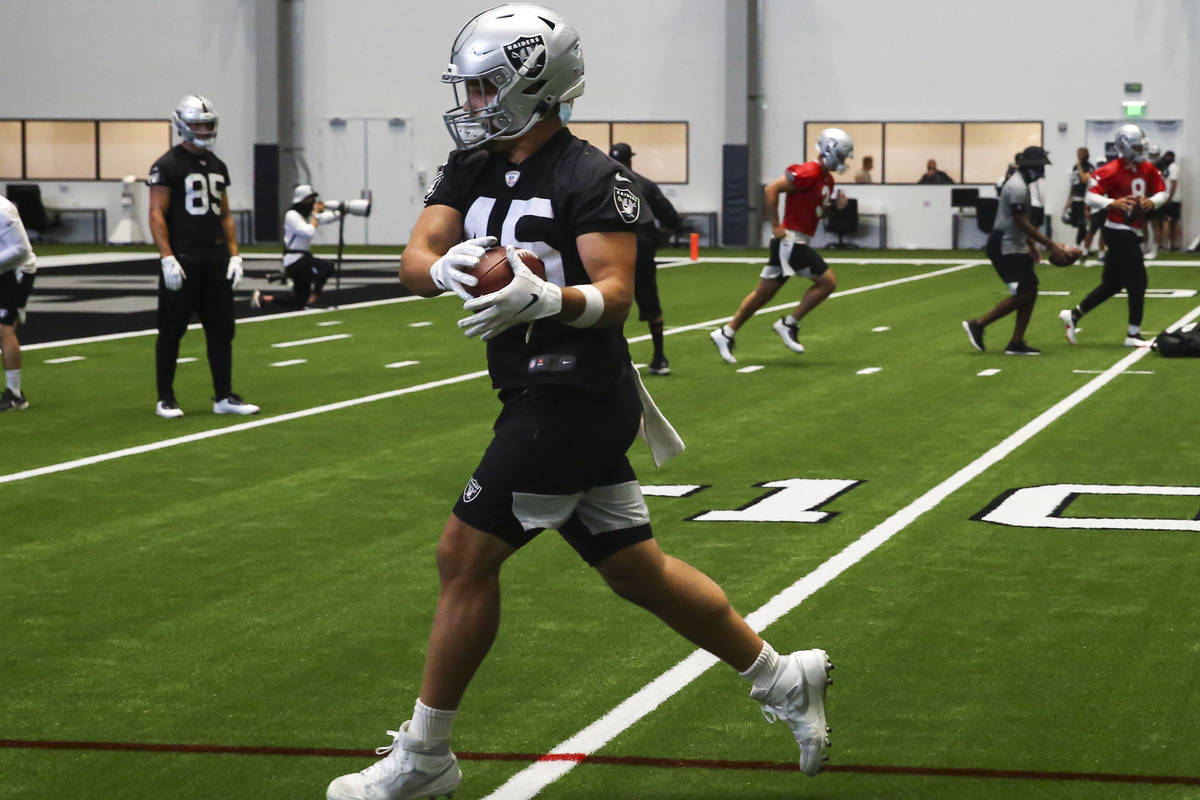 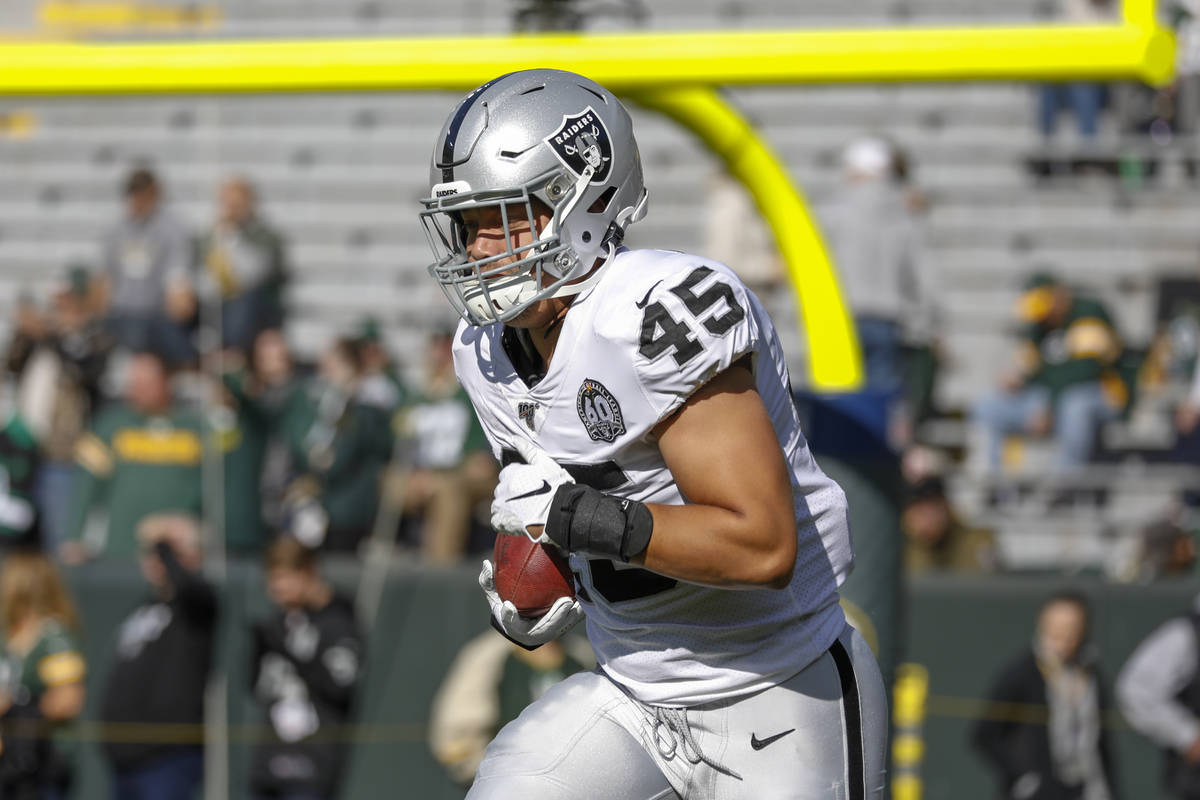 Fullback Alec Ingold had what most observers would call a successful rookie season, particularly for an undrafted free agent who entered training camp last year as far from a lock to even make the roster.

He wasn’t about to rest on his laurels after a debut season he graded a B.

While there were definitely A-plus moments, Ingold now realizes what it takes to make it through the marathon of an NFL season at a treacherous position like fullback.

The 24-year-old Wisconsin alum hopes the work he did in his first professional offseason will translate to more consistency and allow his body to hold up through an entire season.

“I think I exceeded some people’s expectations, but definitely not my own and not the coaching staff’s,” he said after a closed walkthrough at the team facility Monday. “I think I started off slow and had a great middle part of the season and then kind of ended off with that rookie wall.

“Playing good December football is really important to us, so once again, that goes back to the body and just really focusing on being a professional about everything that goes into this job so that we can start fast, we can stay fast and we can finish fast.”

That’s the goal for the entire Raiders’ offense this season. Ingold appreciates that he found his way to a team in which coach Jon Gruden still values the role of the fullback, a disappearing position in today’s game.

Ingold said the goal is for the offense to force defenses to become reactive to what the Raiders want to do.

“The main message for our running back room and really our entire offense is we’re definitely trying to apply pressure this year,” he said. “There’s no pressure felt by us. We’re trying to push the standard and see how good we can be. So just trusting each other and holding each other accountable as best as possible is definitely something we’ve been looking towards in this camp.”

Blocking is Ingold’s strength, but he hopes to contribute even more as a ballcarrier and receiver. He got 10 carries last year, all with the Raiders needing one yard for a first down or touchdown. After converting the first six, he was stopped on three of his final four attempts.

Ingold also caught all six of his targets in the passing game for 44 yards and a touchdown, including a three-catch performance against Jacksonville. Derek Carr had a 136.8 passer rating throwing throwing to Ingold, averaging 7.3 yards per attempt.

As a team, though, the Raiders struggled in the red zone and goal-line situations. Ingold takes on some of that responsibility.

“That’s definitely issue No. 1 for us and for myself,” he said. “There was a point in the season where we were No. 1 and Top-5 in a lot of those aspects. To finish the season, all of a sudden you can fall really quick in this league. The margin of good to great is very, very small.

“So, I think it’s a huge emphasis for our team and I think we’re really excited to take that next step into being the best we can be here in goal line.”

An expanded role appears to be in the plans for Ingold based on the early practices at training camp and he says his improvements in the weight room will help ensure he’s ready for it.

He even mentioned being able to line up in various spots, including tight end, if injuries or circumstances dictate a need.

“I need to to be able to step up for the team and be ready for those opportunities when they come,” he said. “Just being in shape and ready to perform at a high level and grow my role as much as possible while still keeping my main focus on iso lead blocks is really my whole goal for this operation.”

That should help him stay solidly ahead of the curve.